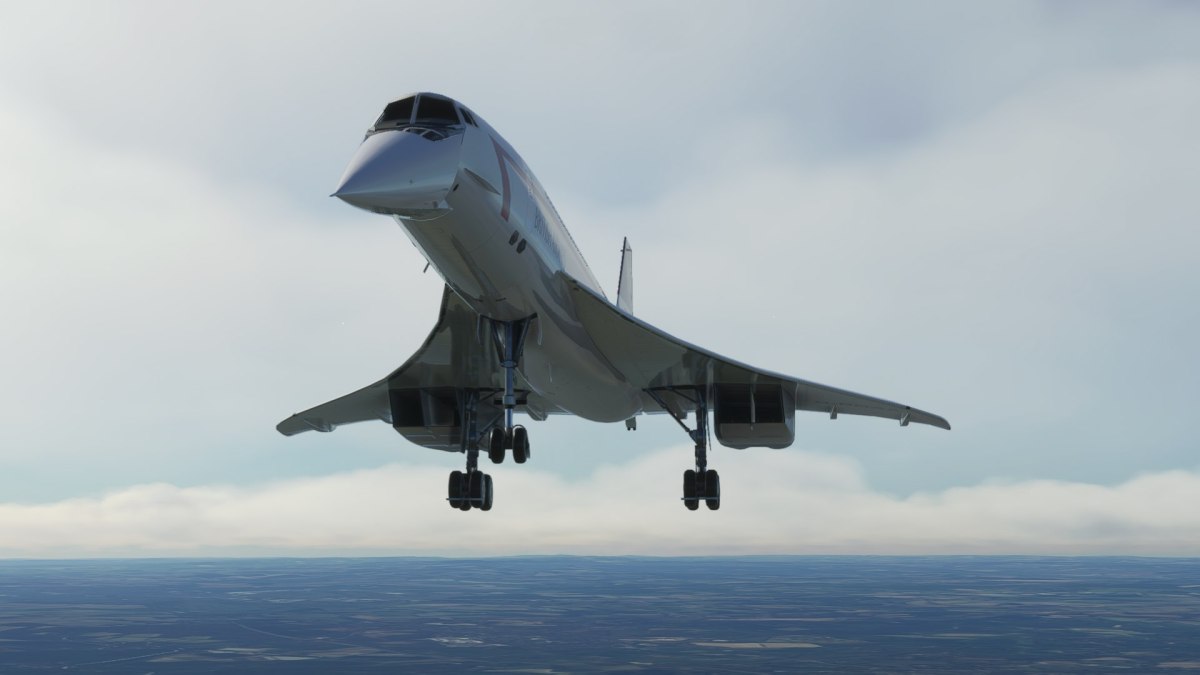 Today third-party developers had plenty more assets to share about upcoming Microsoft Flight Simulator add-ons, including both aircraft and scenery.

First of all, DC Designs provided a new look at Concorde, alongside a development update.

Work has progressed well on Concorde this week, with further animations being made functional and the first steps made toward increasing modelling detail. I have a lot of research material from the original project, much of it kindly donated by Concorde fans in 2020, which is being put to very good use now.

One of the main animations now active is the nose-droop, while the undercarriage has undergone an upgrade of sorts with slightly more accurate animation sequence. The super-shiny paintwork has been toned-down a touch but at this time it remains a material without proper PBR texture sheets – that will come later. I have created the first decal sheet and am already replacing textured markings with high-resolution decals, a process that will take several weeks to complete on this model.

I also have successfully converted Concorde’s cockpit into MSFS format and installed it. However, this is not up to visual standards at all at the moment so it will be some time before I can realistically share any images. For now, it will just help me with basic flight testing and getting cameras set up, ready for when the internal work begins.

It’s quite exciting knowing how much more detail can be brought to the model with MSFS, as the previous platforms ( FSX and Prepar3D ) were very much more limited when it came to visuals. Plus, with the latest MSFS update, the new simulator can handle even more detail than before, so I’m pretty much throwing most of my polygon-saving caution out of the window and going for it on the detail with Concorde. It’s clear MSFS can handle it, within reason, so why not make her look as good as all the other aircraft, inside and out?

Finally, after much investigation and thought over the past few days, I’m going to include a Flight Management Computer in Concorde that visually resembles, as closely as possible, Concorde’s actual Inertial Navigation System. Inputting countless Lat-Lon waypoints will be a bit too much for most folks, whereas the FMC provides everything the user needs. Whether or not I include an optional GPS unit, as per other developers’ aircraft, really depends on community feedback – once I get a ‘feel’ for what the majority want, I’ll go with that.

“The F-16 cockpit has been getting many of its switches, knobs and instruments installed this week. There are so many variants / Block variations of this iconic fighter that it’s quite tough to decide upon which cockpit layout I should use. Given the fact that the majority of combat and weapons systems in the F-16 are not useable in MSFS at this time, I’ve gone with a layout that is mostly based on the Block 52 cockpit but with some differences in detail.

One thing that both DC Designs and SC Designs have been able to do recently is collimate the Heads’ Up Display, as per the picture. It’s not full collimation but it’s a huge step in the right direction for accurate projection displays.

The MFDs are active and working as they should be, while coding for all switches and controls is being applied as I work through the various systems. The F-16 didn’t have an auxiliary power unit ( something it had in common with the F-14 ) so a GPU model will be provided, as will a battery switch to ensure you can start the engines if you’re at a field without ground power facilities.

Special effects that will accompany the launch will include all the now-familiar effects such as engine exhaust blur, tire smoke and contrails. I’m going to try for wing-tip G-vortices as well with this one, to see how it turns out ( might get myself one step ahead of DC Designs there!). Sim Acoustics have slotted the F-16s in for full custom sound in November, so this may mean that they miss the pre-Christmas launch I was hoping for as the Marketplace take at least a month to test and clear new products, but we will have to see how that pans out.

The next two to three weeks will see the completion of the F-16C cockpit, which will then allow me to convert the modeling to support the rear-seat layout of the F-16D. This will not be a fully functional rear cockpit – the visuals will match up, but the displays will be repeaters. Full flight controls however will be included, and all essential instruments for instructing purposes, ready for when we see shared-cockpit come to MSFS.”

It’s worth mentioning that the collimated hud mentioned here will also be added to DC-Designs’ F-14 and F-15 packages in future updates.

Continuing with aircraft, SimWorks Studios released a couple of images of its Quest/Daher Kodiak, showing both the exterior and the interior. We also hear about development progress.

“The 3D model is 99.9% complete and tomorrow we will be doing the final adjustments to the model & textures to close it out. Passengers are now in for the tundra & mixed cabin, with seatbelts and all. We are now ready to verify the aircraft’s handling and go for the last one: the engine

Our torques and fuel flows are very close to the POH, the next task is to adjust the turbine RPM and propeller performance to match the real aircraft. That is one of the finest parts of the flight model, which we intend to do as well as we can within the capabilities of MSFS.

The engine is especially important not just for the Kodiak, but also for another aircraft that we will announce soon, so we want to do it right on the first go.”

While it’s not a massive hub, it hosts a few domestic and international flights to the UK and Germany. Apparently, development is already in “advanced progress” so it should come fairly soon.

Last, but not least, Orbx provided new screenshots of its home airport, Essendon Fields Airport (YMEN) near Melbourne in Australia.

This one will release during the weekend, so it’s almost here.