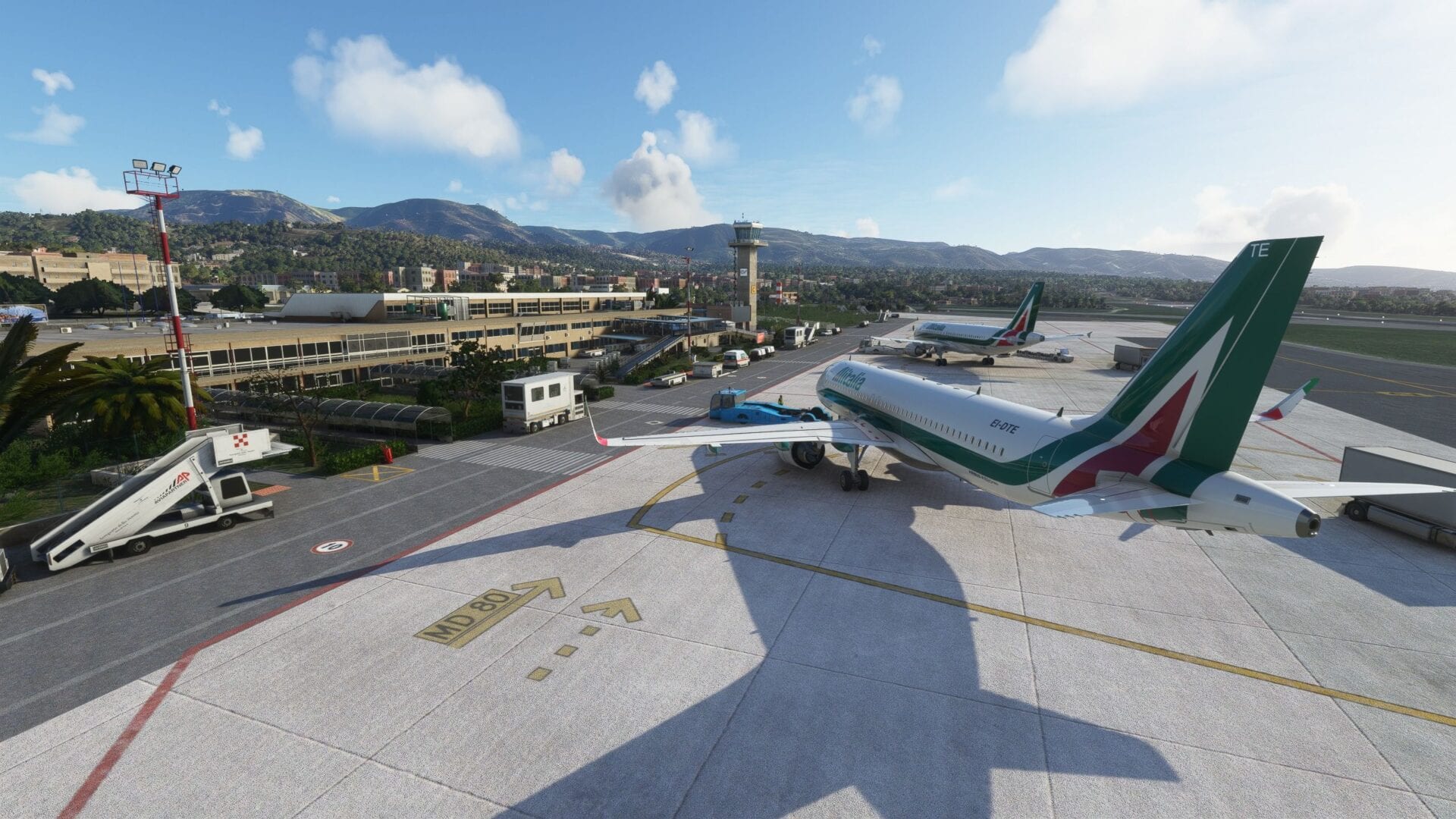 The Mediterranean Sea and its surroundings are a great region for flying, and you couldn’t find a more central location than Reggio Calabria Airport (LICR). Italian developer Tailstrike Designs recently released an add-on portraying it for Microsoft Flight Simulator.

The add-on is available on Aerosoft’s store for about €19, and it comes with its own installer, meaning that you don’t need to deal with much hassle in order to get everything ready.

Reggio Calabria is located at the very tip of Italy’s boot, and the airport itself is in a lovely location between the city and the coastline, creating opportunities for beautiful approaches regardless of which runway you pick.

If you’d like to see what the airport looks like in detail, you can check out the in-depth flyover video below, showing Reggio Calabria under every angle, lighting, and weather condition.

The scenery extends much beyond the borders of the airport, which is properly fenced as it should be.

The developers went out of their way to add plenty of details to the surrounding area. This includes the coastal railway and station, the nearby Hitachi Rail plant, the Sant’Agata stream and its banks, the Oreste Granillo soccer stadium, and more.

Incidentally, you can download a really awesome free scenery pack enriching Messina on Sicily’s side of the strait, making the approach to Runway 15 (which you can see in the second video below) even more stunning.

Not only does the orthographic map that serves as the base of the airport comes with better resolution than a lot of scenery add-ons out there, but Tailstrike also terraformed the area to suitably accommodate the airport and its surrounding.

They mostly did an excellent job with that, and the only flaw I found is a sizable mesh bump on taxiway C (which actually appears closed on my chart while it’s open in the scenery, but I couldn’t find a recent picture to confirm its current status) and another nearby on runway 29.

They’re far from lethal compared to larger bumps that some default airports in Microsoft Flight Simulator feature on their runways, but they could use fixing.

Bumps aside, the runways are realistically (and visibly) sloped which is really nice to see.

The texture work on the runways and aprons is very good, precisely reproducing not only the correct (and rather complex) markings but also the patchwork of different materials used for the paving.

The same attention to the detail went into the terminal, the control tower, and the surrounding buildings like the fire station, the general aviation and police hangars, the fuel depot, and more.

Plenty of weathering makes walls and roofs believable, and there are even small puddles on the top of the terminal likely portraying condensation from the air conditioning vents.

While the terminal interior is not modeled, the use of PBR does an adequate job at simulating glass panels, while see-through textures are used beautifully in the nearby canopies. The overall attention to detail is simply top-notch.

The airport looks great in the rain, while snow coverage is a bit too patchy for my taste. Perhaps with the new implementation of snow and ice that came with the latest Microsoft Flight Simulator update, there is room for improvement even if, admittedly, Reggio Calabria really doesn’t get much snowfall.

Night lighting is adequate, but perhaps slightly weak on the main apron. That being said, the floodlights are beautifully-modeled to a standard way above the average you normally see in most airports.

There are no static aircraft on the main apron (which isn’t a demerit). As usual, their value is debatable with pros and cons, but Tailstrike did include two of the iconic firefighting “Protezione Civile” Canadair CL-415 on the GA apron. I wish they had different registration numbers for each other, but I will admit that I’m nitpicking here.

There are a few issues with the functional setup of the airport. If you land with an airliner (Reggio Calabria is regularly visited by A320-class aircraft), Ground won’t offer the option to taxi to the gates or to connect a ramp. This is likely due to the gates being marked as “parking” instead of “gates.”

Limited observation seems to indicate that this also messes with AI airliners. Another issue is that fuel trucks aren’t enabled, which is probably an oversight. All of these small blemishes could likely be easily fixed in an update.

Incidentally, the RNP approach to Runway 15 appears to be extremely shallow, barely clearing the buildings. Yet, this is likely due to the data coming directly from Microsoft Flight Simulator and is probably unrelated to the add-on.

Speaking of performance, the airport is very well optimized despite the superb level of detail. On my PC (RTX 3070, Ryzen 9 3900x, 32 GB RAM), I lose only about 4 FPS at 1440p resolution and Ultra setting. That’s absolutely warranted by the massive improvement over the default scenery.

In conclusion, Reggio Calabria by Tailstrike designs is a beautiful airport, both due to the great work done by the developers and by its naturally stunning location at the very tip of the Italian boot.

If you want a scenic base right in the middle of the Mediterranean, you likely can’t find a better option in Microsoft Flight Simulator, at least until someone brings some competition to the table with Catania.