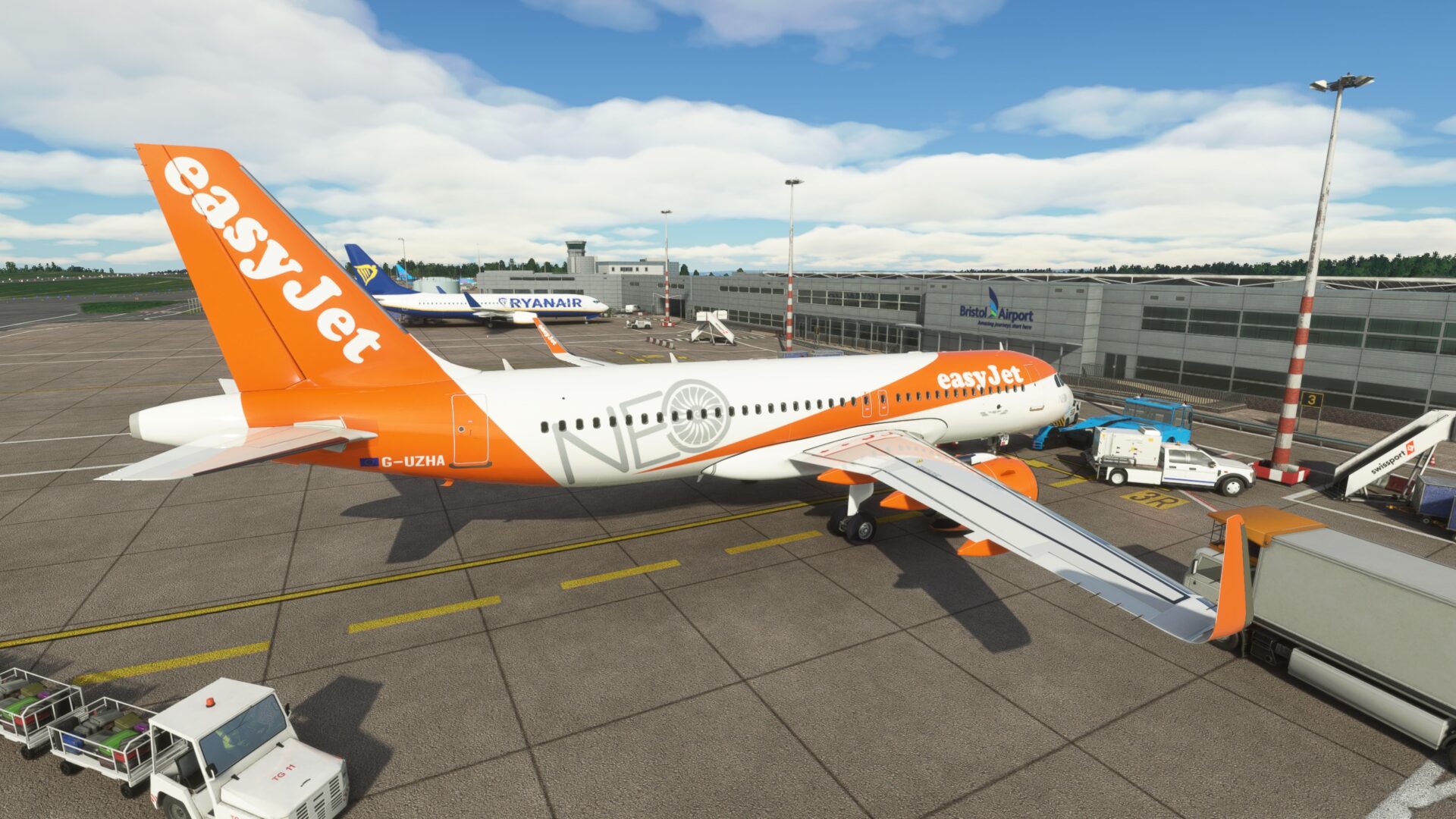 As the eighth busiest airport in the country, Bristol is definitely a much-needed addition to the sim, especially for those interested in low-cost and charter airlines like Easyjet, Ryanair, and TUI. That being said, it’s also perfect for light general aviation and business jets.

The add-on is now available on Orbx Direct and on the developer’s own store for $18.84. With the former, you can use the handy Orbx Central client to install it and keep it up to date. The latter option comes with its own installer.

If you’d like an extensive look at the scenery, you can watch an ILS approach and landing on runway 09 in the first video below, and a full flyover in a variety of lighting and weather conditions in the second video.

Published approaches, SIDs, and STARs are all available and perfectly functional, and the same can be said for the PAPI lights that are calibrated at the appropriate angle to guide you on visual approaches.

Taxiways and ramps are also correctly implemented and labeled according to the charts, so the default ATC will let you find your way around the airport easily.

Thanks to that, the airport handles AI aircraft better than most, letting them navigate to and from the runways as they should. This isn’t exactly common nowadays in Microsoft Flight Simulator.

All ground services are implemented and active, included the much-forgotten fuel trucks. Basically, Bristol Airport is nearly perfect from a functional point of view. The only small issue I found is that catering trucks and baggage carts seem to be inverted in their positioning and behave a bit weirdly, while at some gates, the airstairs appear to have trouble driving to the doors. I suspect this is an oversight and it should be fixed soon.

The orthophoto that serves as the base of the airport is adequately detailed and does a much better job than the default aerials included in Microsoft Flight Simulator. That being said, I would have appreciated the addition of custom textures for streets and parking lots around the airport. The “naked” orthophoto is always a bit too pixelated for those. At least, PilotPlus added a few curbs and it helps, but going a step further and texturing the asphalt would have been even better.

On the other hand, the terraforming is great across the board, reproducing the hilly terrain beautifully, and the iconic sloped runway is accurately modeled, making landing a bit more challenging.

Runways, taxiways, and aprons are beautifully textured, doing a great job in recreating the patchwork of materials and surfaces of the real airport. The same can be said about their markings, which are accurate and feature a good balance of wear, weathering, and definition, achieving a great sense of realism.

The modeling of the terminals, towers, hangars, and peripheral buildings is absolutely superb, both airside and landside. It’s also matched by great texturing, weathering, and skillful use of PBR to create a nearly photorealistic look.

Massive care has gone into reproducing the terminal’s interiors. They’re among the best in the industry and the addition of animated passengers and workers is a further improvement over the excellence PilotPlus had already achieved with London Oxford.

Perhaps, I’d have included even more passengers, because they are a bit sparse, but I imagine performance considerations had to be made and this is really just a nitpick.

On the other hand, the halls of the terminal are simply beautiful, so much that you’ll likely regret the fact that they’re not more visible from the aprons.

The airport is fully fenced, which is something I always appreciate, and a number of additional buildings landside like the hotel, the parking garage, the office buildings, the car rentals, and the electric substation are nicely detailed and textured, showing no less care than the rest of the scenery.

Static aircraft have been included, portraying the correct models and airlines for the airport. The only issue I have (as usual) is that there is no obvious option to remove them. Their quality is adequate, but with AI traffic solutions coming and many using ATC networks like VATSIM, the ability to easily clear the aprons would be very welcome.

An exceptional effort (at least compared to most other scenery available for Microsoft Flight Simulator) has been made in portraying the airport in the rain. Not only does the texture work look beautiful when wet, it also doesn’t rain inside (which isn’t as common as you’d think). But water effects appear on the windows and skylights, improving their realism considerably.

Snow coverage isn’t perfect, but it’s still adequate considering that developers are still very limited in what they can achieve with Microsoft Flight Simulator’s dev tools.

Night lighting is great, both on the aprons and within the terminals, basically tying a bow on the overall quality of this airport.

In terms of performance, the developers did a great optimization job. Despite the fact that the airport adds tons of details compared to the default scenery, my PC (RTX 3070, Ryzen 9 3900x, 32 GB RAM) loses less than 10 FPS at 1440p resolution and Ultra detail settings, sticking quite close to 60 frames-per-second.

Ultimately, I think it’s rather evident that Bristol by PilotPlus is currently one of the best airport add-ons available for Microsoft Flight Simulator. Besides a few nitpicks, the quality is exceptionally good.

If you love flying in the United Kingdom, and even more so if low-cost airlines are your aviation bread and butter, recommending this add-on is definitely a no-brainer. 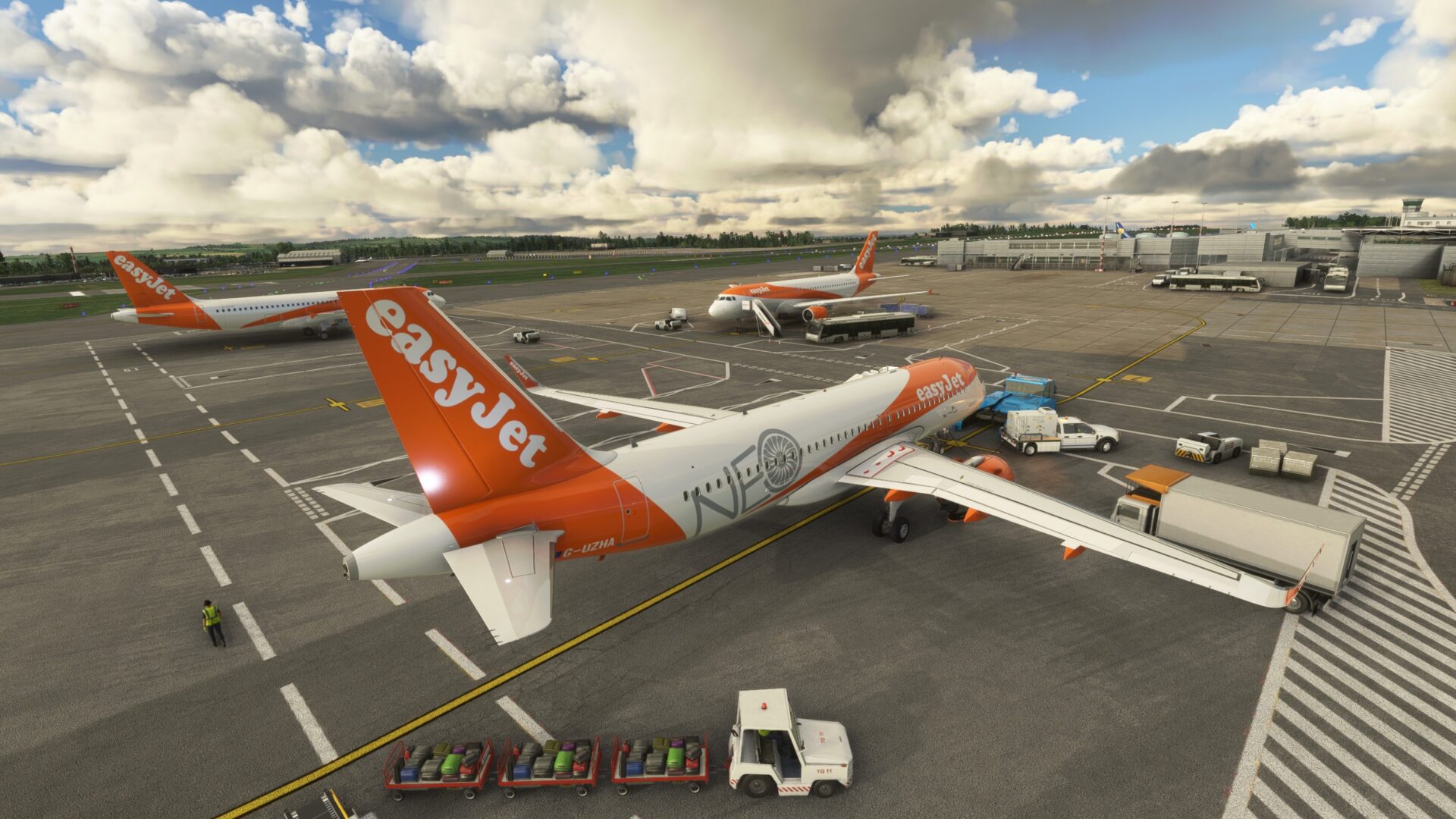