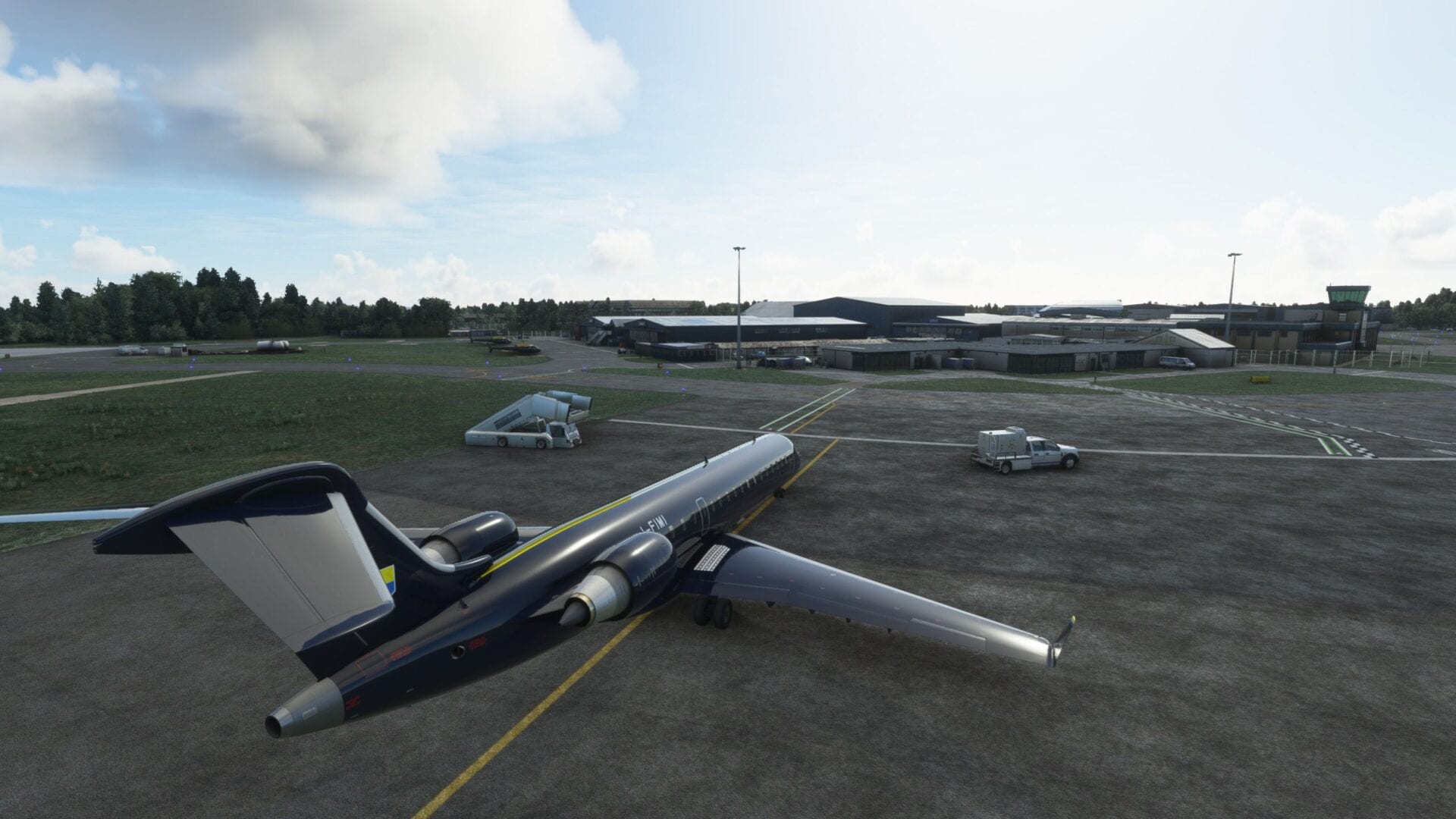 Despite the name, which is a rather recent rebranding for what was previously called Kidlington Airport, it’s about 60 miles from London. Yet, it’s a prominent destination for business aviation and flight training.

You can find it on Orbx Direct for approximately $18. This means that installing and keeping it updated is a breeze thanks to the Orbx Central client.

If you want to see what it looks like with your own eyes, the first video below showcases an ILS approach and landing on runway 19, while the second provides a better look at the airport in a variety of lighting and weather conditions.

The layout of the runways, taxiways, and aprons is up to date, definitely proving that the developers did plenty of research (apparently with the support of the airport’s own management) to get things right since both Google and Bing Maps are outdated. For instance, the old 11/29 runway is correctly closed and used exclusively as a taxiway, as opposed to the default Microsoft Flight Simulator scenery that has it still active.

The markings correctly reproduce the real ones as far as I could see in all the recent footage I was able to find (and there is quite a lot due to the popularity of London Oxford for general aviation). The texturing job is also great, with a lot of weathering and an excellent reproduction of the patchwork of materials that compose the tarmac after many repairs and repavings.

The old runway is a touch tidier than I would expect, and the marks left by the cancellation of the old aiming points on 19/01 when it was widened a few years ago are missing (unless they’ve been somehow cleaned up very recently in the real airport). Yet, these are rather minor flaws when you look at the big picture.

The orthophoto that serves at the base of the airport is really nice, depicting the tilled ground and grassy surfaces beautifully.

It blends with the surroundings seamlessly, and additional ground details like the recently-built concrete helicopter pads complete the picture perfectly.

A relevant issue is represented by the trees in front of the thresholds of the runways. This is visible on both 01 and 19, but it’s more prominent on the 19 side where there are a couple of lines of trees that simply aren’t there in the real world. They’re not tall enough to really crash into them unless you’re very clumsy, but they’re distracting and the tops are dangerously close to the glideslope. Calling a lumberjack with a chainsaw would be in order here.

The approaches work correctly, and the ILS can be delightfully challenging if you come from the south, featuring a tight right turn just before capturing the localizer. It’ll keep you very busy on aircraft with a heavier workload like the new CRJ, which is a whole lot of fun to land here.

Incidentally, according to the charts, the ILS 19 approach shouldn’t be flown in coupled mode (but it still works if you want. I actually managed to autoland an A320 with it), so it’s even more challenging. As a matter of fact, if you’re looking for an airport to really master the CRJ, this is likely it.

Moving on to the buildings, they’re extremely well done, and when I say “extremely,” I meant it. They’re among the very best and most lifelike I’ve seen in Microsoft Flight Simulator.

Despite being crisp and detailed, the texture work includes just the right amount of weathering enriched by generous and skillful use of physically-based rendering, and there are plenty of small details to discover as you explore every nook and cranny.

The folks at Pilot Plus went above and beyond with the detailing of the interior of the tower and terminal. They are so well made that you could simply sit there and enjoy the sight of the business jets in the aprons.

The exterior of the glass even reacts dynamically to the rain, which isn’t something I’ve seen often.

Pilot Plus didn’t just model the airport itself, but they pushed the scenery well beyond its fence. Offices, hotels, farmhouses, car dealerships, and even the construction area for the upcoming Oxford Tech Park have been reproduced to add flavor to the area and familiarity to the approaches.

This is always something I love to see, since the airport itself is only part of the landing and take-off experience, and too many developers stop at the fence, effectively neglecting details that are in full view during normal operations.

There are plenty of static aircraft –fixed-wing and rotary– on the aprons and in the hangars, which makes the scenery appear livelier. Their quality isn’t something you would write home about (excluding the helicopters that are quite nice), but they do their job.

Incidentally, ground services that you’d expect at this kind of airport work correctly, including the much-neglected fuel trucks.

I guess you could say that the developers missed the chance to include a few luxury cars and hypercars in the parking areas, considering that EGTK serves a lot of the “top 1%” that can afford their own jets, and at least some of them probably don’t care for driving Volkswagens. Of course, I’m just nitpicking now.

The scenery looks great in all weather conditions, with textures that look great when it gets wet and fairly good (albeit not perfect) snow coverage. A nice touch is that (unlike many other airports) it doesn’t rain or snow inside the buildings.

Night Lighting also feels just right, neither underwhelming nor overpowering. Unfortunately the usual weird lights left by Microsoft Flight Simulator’s default scenery impact the atmosphere a bit, but developers have no way to remove them yet.

In terms of performance, London Oxford is very impressive. On my PC (RTX 3070, Ryzen 9 3900x, 32 GB RAM). I lose only a couple of frames-per-second at 1440p resolution and Ultra detail settings compared to the default scenery.  Below you can see a comparison.

Considering all the details that PilotPlus poured into this airport and its surroundings this is really impressive optimization work.

Ultimately, Pilot Plus did a fantastic job with London Oxford. It’s one of the most detailed and beautiful airports in Microsoft Flight Simulator.

It shows that a lot of love and research went into shaping every corner of this scenery, and it really showcases what a dedicated developer can do when reproducing a smaller airport, providing the user with a sense of presence that’s very rare in larger hubs.