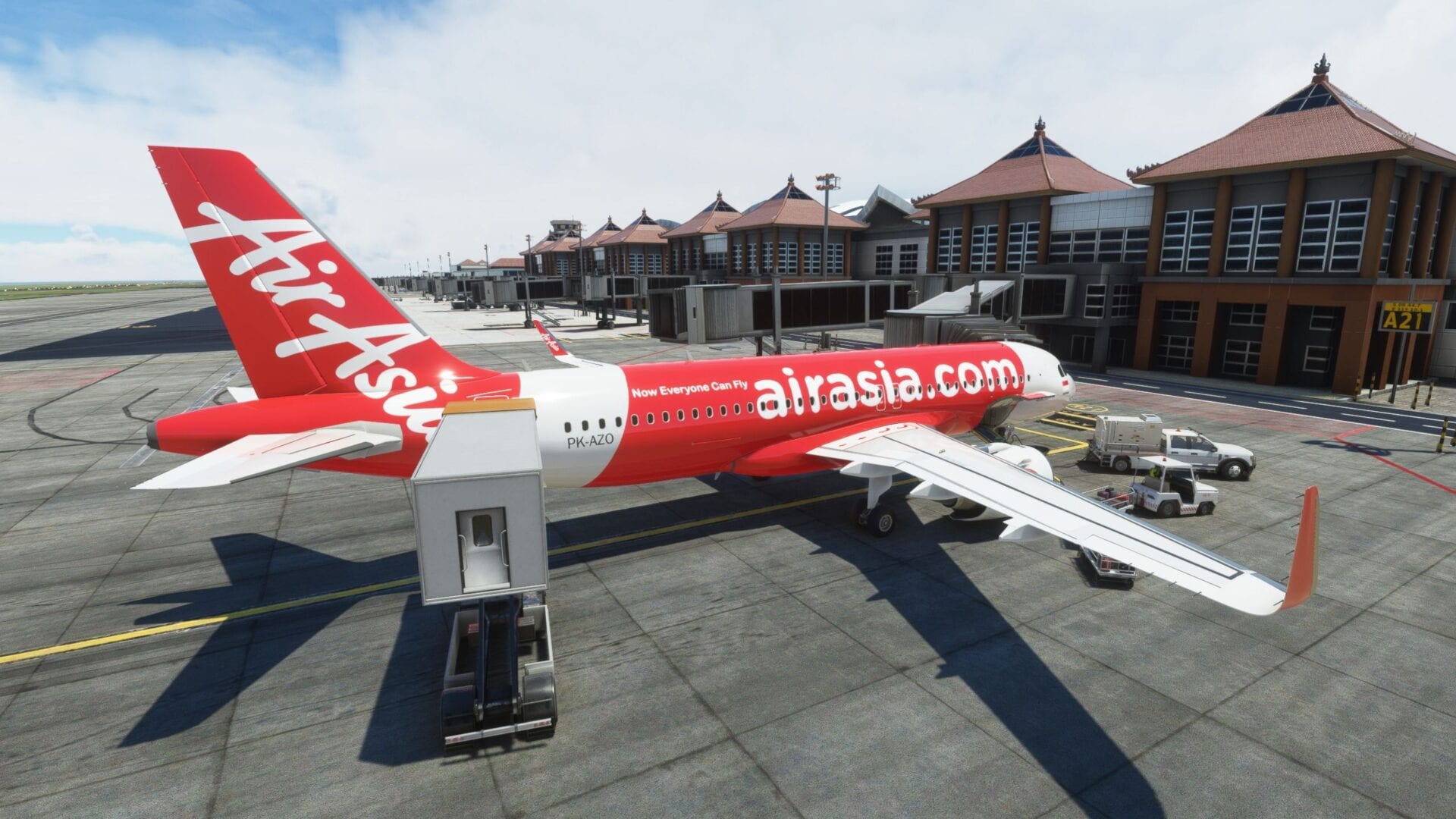 The airport is located in an extremely scenic area on a narrow strip of land wedged between two gulfs, and it’s the second busiest airport in Indonesia.

It sees a lot of regular airline traffic year-round, but it’s perfectly suitable for general aviation, cargo, and charter operations as well. As a matter of fact, it’s one of the most lively airports I’ve seen in Microsoft Flight Simulator thanks to the live traffic feature (and AI aircraft don’t appear to encounter issues, which isn’t always the case with all third-party scenery).

You can purchase it on Aerosoft’s own store for approximately €20 including applicable VAT and it comes with its own installer. Getting things ready to go quick and painless and Aerosoft also has its own updater, which helps in keeping all of its products in tip-top shape.

The package comes with its comprehensive set of charts, which is always a very welcome bonus and adds to the value of the add-on for those who don’t use a dedicated subscription service.

If you’d like to take a look at what the airport looks like, you can enjoy a video above showing the spectacular ILS approach to runway 27 (using FlyByWire’s A32NX’s new autoland feature, which has no issue with this airport).

The second video below showcases an extensive look around the airport in a variety of lighting and weather conditions.

The approaches work correctly, and so do all the SIDs and STARs. All the taxiways and parking gates and ramps are also properly implemented and labeled, so you can expect precise guidance from ATC to and from the runways.

The only small issue with the functional implementation is the lack of ability to call a fuel truck, which some third-party developers still seem to forget. It’s mostly cosmetic, but there is no reason to omit it.

It’s impossible to talk about the value of this airport for Microsoft Flight Simulator without spending a few words about its location. As I mentioned before, it’s one of the most spectacularly located airports in the sim and the proximity of 3,031 meters-tall Mount Agung makes each approach to runway 27 a sight to behold alongside the final over the Gulf of Benoa.

The unpredictable weather due to the tropical climate paired with the presence of nearby mountains also helps to make things interesting.

Speaking of the approach, one of the most welcome elements of this scenery is that the work done by its developers extends much beyond the airport’s fence.

A-Flight worked hard in adding plenty of custom buildings across the whole area of Kuta, not only implementing landmarks like mosques and malls, but also replacing many of the default urban buildings in Microsoft Flight Simulator with models that feel more authentic to the location, improving the view considerably.

They have done extensive work to fix the coastline of the Gulf of Benoa, restoring its beautiful forest of Mangroves that was obliterated by the default simulator’s procedural AI, which mistook its dark green hue as water. On top of that, they replaced the frankly dreadful default placeholder for the iconic (and very visible) Bali Mandara Toll Road with a much better model including its toll gates built to imitate traditional Balinese architecture.

Admittedly, the textures of these far-away buildings aren’t to call home about, but you’re supposed to see from the flight deck while flying, and they do their job.

All this work (and more) done to enrich the surrounding area is something I’ll never stop praising. While it’s nice to have a good-looking airport when you’re parked and taxiing around, take-off and landings are the most exciting parts of a flight, and if the scenery around the airport isn’t up to the task, that experience is negatively impacted.

The orthophoto that serves as the base for the airport is good and nicely decorated with vegetation. An issue can be found in the construction area at the western end of the airport. In the real world, it’s dominated by rather tall piles of sand, but in this reproduction the area is flat.

The texture work of runways and taxiways is also very well done. They are of the correct color and the markings are appropriate on both the north and south aprons.

There is plenty of weathering, and the developers also reproduced the black marks left by the old taxiway lines deleted when the aprons were overhauled. The only issue is that some kind of weirdness with the shader causes those to turn white-ish when seen from afar. It isn’t big enough to be disturbing from the flight deck, but you’ll notice it if you squint.

The terminal buildings are mostly quite beautiful, with the new international terminal mixing modern elements with traditional Balinese architecture. It gives the whole airport a very striking and unique look.

The domestic terminal has a modeled interior, but if you look past the rather opaque windows, you’ll find that it’s not exactly the best in terms of modeling and texturing. It holds up as long as you stay outside, and I guess that’s what it was made for.

All the airside buildings including the cargo terminal, fire station, towers, hangar, and more, hold up very well even at very close examination, and they’re one of the highlights of this whole scenery. This is also thanks to the appropriate weathering and skillful use of physically-based rendering.

There is a visible inaccuracy where the two terminals join around gate 25. That part in the current real airport features the same architecture as the domestic terminal, while in this scenery it’s modeled with the features of the international terminal. It’s not massive by any means, but it’s noticeable if you happen to know the place and to park at gate 25.

Most of the landside area also isn’t bad, but it features highs and lows. The most visible places are nicely modeled and textured, but there definitely are parts that have been neglected and feel quite underwhelming,

The streets in front of the airports are especially grainy, so much that they look like dirt paths instead, which isn’t exactly what you’d expect from the landside of a large international airport.

Parked cars are also a bit weird, with half that are reasonably detailed, and half that are little more than boxes that feel a bit disturbing because they’re perfectly visible from some of the ramps.

Unfortunately, not all the airside area is as lovingly detailed as its buildings. The north apron is a bit empty, with the real airport looking a lot more cluttered with plenty of vehicles and equipment.

The grassy area south of the airport is also problematic. Especially the parts closer to the runway thresholds feature plenty of measuring equipment and antennas in the real airport. They’re very prominent during approaches and landings.

Those are all missing in this scenery, which is strange because you can actually see where they would be in the orthophoto. It’s like the developer simply forgot to place them or ran out of time. Even the massive VOR antenna is missing, represented only by a white circle painted on the ground.

Another strange omission is part of the airport’s main signage, which is very visible from the gates. This scenery has “I Gusti Ngurah Rai International Airport” written in Roman alphabet, half in red and half in white. This is outdated by a few years.

The sign has been changed in 2018 due to a Bali Governor regulation designed to preserve the Balinese language. The new one has the Roman alphabet in white topped by the translation in Balinese in red. This seems frankly hard to miss during any serious attempt to research an update of the models of the airport from previous sims. It looks quite nice and adds to the flavor of the airport, so it’s a pity that it’s missing.

The textures react well to weather, and the physically-based rendering looks quite realistic in the rain. Snow coverage is hit and miss, but that’s irrelevant. It really doesn’t snow here. On the other hand, it rains quite a lot.

Night lighting is well-done and feels very natural, without being overpowering. This is true for the taxiway and runway lights, the floodlights on the aprons, and the lighting of the terminals.

In terms of performance, Bali Airport is nothing short of impressive. On my PC (RTX 3070, Ryzen 9 3900x, 32 GB RAM), I actually have slightly higher framerates at 1440p resolution and Ultra detail settings compared to the default scenery in Microsoft Flight Simulator.

Below you can see a comparison that also showcases how much Aerosoft’s scenery improves the airport.

That being said, the performance overhead left on the table makes the lacking details mentioned above sting more; there certainly is plenty of room for the addition of the VOR antenna and pretty much all that’s missing without breaking the framerate bank.

Don’t get me wrong: this isn’t a bad airport. Quite the opposite. The main elements of the scenery are great and the work done beyond the borders of the hub itself is laudable, improving the rather dreadful default scenery tenfold. Yet, I really hope that the developers will update it adding what’s missing and correcting the few inaccurate details.

Ultimately, while not perfect, Bali Airport is certainly a good addition to the collection of anyone interested in flying in this often-neglected part of the world, or quite simply if you want an airport that looks and feels really unique, featuring extremely scenic approaches.