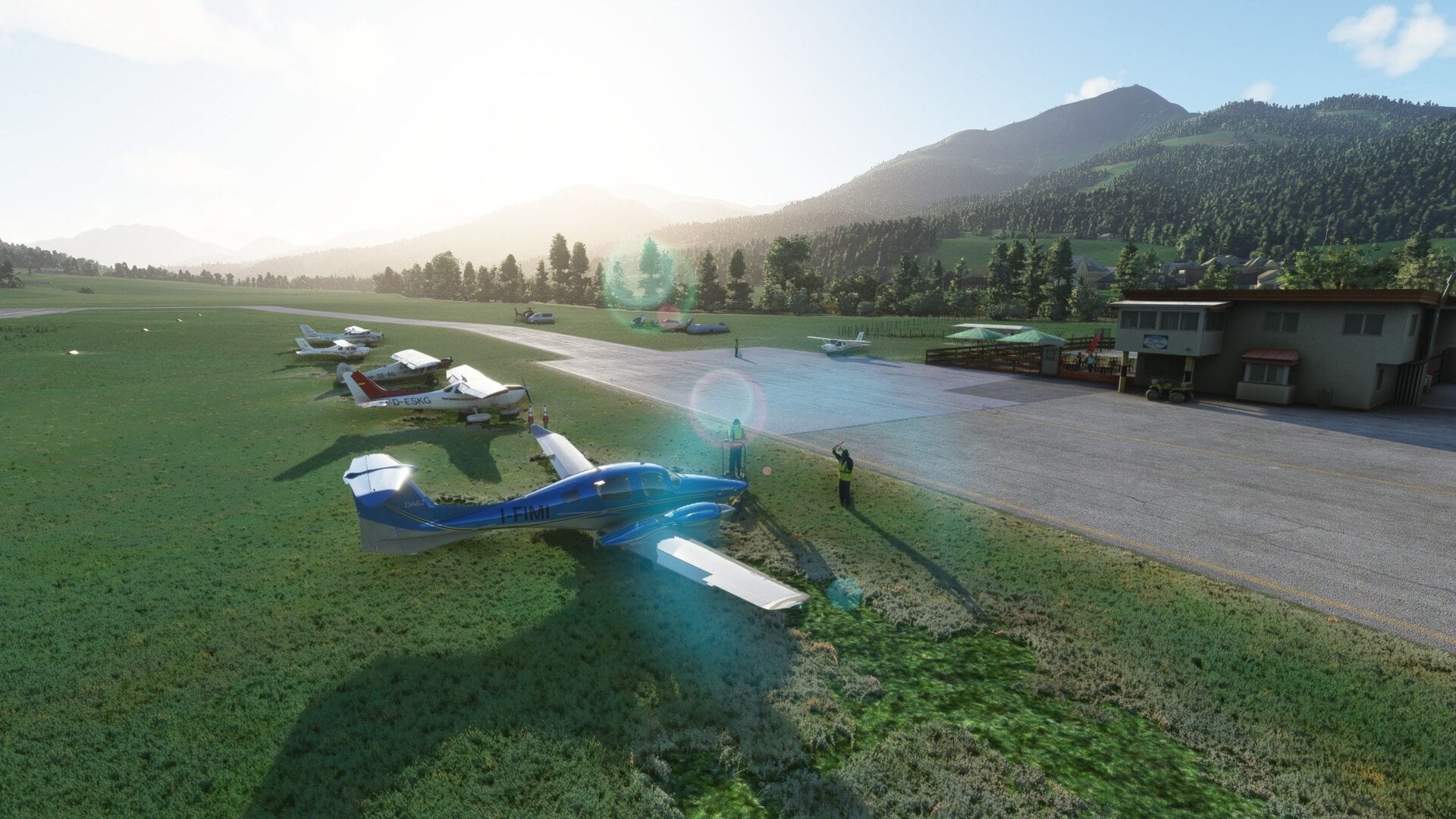 Sankt Johann (LOIJ) is a small general aviation airport serving an absolutely charming town at the intersection of four valleys in Tyrol, making it an interesting location to fly to if you enjoy exploring the Alps.

It’s the latest of a series of airports released by Gaya, its partners at Orbx, and Digital Designs that marks Austria as one of the nations with the largest concentrations of payware add-ons for Microsoft Flight Simulator at the moment.

Besides Sankt Johann, we have the capital Wien, Salzburg, Graz, Zell am See, and the famous Innsbruck, basically creating a lovely aviation playground.

Of course, given its size, Sankt Johann isn’t suitable for large aircraft. If you like flying airliners, you’ll probably have to look in a different direction (like Newcastle, which we reviewed last week). On the other hand, if general aviation is your daily bread, you’ll feel right at home here.

This airport has three strips. The larger 744-meter paved runway is flanked by smaller grass strips.

The package, priced at $15.22 on the Orbx Direct store can be installed quickly and neatly thanks to the dedicated client. This is almost as intuitive for newcomers as the in-game store in Microsoft Flight Simulator but offers the advantage of faster updates.

The scenery includes the airport and a few nearby farms and apartment buildings that serve as approach reference points.

It blends very well with the nearby area (even a bit too well for one of the grass strips, which is basically invisible) and creates a nicely bucolic destination or origin for your mountain flights.

If you want to see more of what it looks like, you can check out the video below and a gallery full of screenshots for your perusal.

Texturing showcases the usual high level of quality that simmers have learned to expect from Gaya Simulations, and honestly, it needs it, considering that it has to compete against two fairly good freeware renditions of the airfield.

One of the spotlights, and most definitely one of the elements that set this creation apart from its free counterparts, is the rendition of the runway and its markings, which are absolutely spot-on. This is likely one of the best runways that I’ve seen in a long time in how it closely reproduces its real-life counterpart. If you don’t believe me, you can see a comparison with Google Maps below.

The markings on the whole paved areas, including taxiways and apron, are equally well done, blending perfectly with the surface. If all payware airports had this level of texture work, I’d be certainly a happy camper.

The 3D modeling is also quite well-done, with plenty of static aircraft to make the scene more lively. The terminal, bar, and playground are a close representation of the real airport.

The weathering on the building well matches the rest of the airport, worthy of a place which often has to deal with intense weather among the mountains.

There are only a couple of signs that could have been better served by higher resolution textures to avoid visible artifacts on the lettering, but you need to get really close to notice it.

The static aircraft are the usual fare for this kind of prop, and personally, I would have enjoyed a bit more detail considering that the airport is really easy on your hardware resources.

As a matter of fact, it’s one of the most lightweight sceneries in terms of hardware footprint that I’ve seen in a while. I recorded no difference in frame-rate with and without the add-on. Yet, as you can see below compared with the default version, it does offer a large improvement in eyecandy.

The additions to the surrounding area are a nice bonus, and they even come with cows and horses to enhance the bucolic feel of the area.

The interior of the terminal isn’t modeled, but this isn’t too surprising considering its small size, and the physically-based rendering shaders do a pretty good job in avoiding windows that look excessively dull.

Night lighting is sparse, but this is simply due to the nature of the airport, which isn’t illuminated even in real life.

On the other hand, it reacts extremely well to weather; especially the way it interacts with snow, which is absolutely spot-on (which is quite rare at the moment among add-ons). This is definitely a good thing considering the location.

This is certainly an appropriate place to visit during the holidays, and it’s easy to imagine it decorated with warm Christmas lights. I almost wish Gaya included them only in December as an Easter egg (or Christmas egg… Okay… I’ll stop), even if I have no idea whether the Microsoft Flight Simulator SDK allows for this kind of seasonal decoration for now.

Considering the freeware competition, if I were to provide some feedback to the good folks at Gaya Simulations, I’d advise adding a bit more flair to the surrounding area.

The square of the real-life Sankt Johann with its iconic church is one of the most charming places I’ve seen in a long time and a few custom models featuring the quality of Gaya is capable of to spruce the place up would enrich the scenery massively, especially considering that the nature of the airport encourages sightseeing.

That being said, while its size and scope compared to the pricing can identify Sankt Johann as a rather niche purchase, it’s most definitely a lovely location that will satisfy those who love this kind of environment.

The scenery could use a bit more flair and expansion into the town and surrounding area, but the overall high quality and beautiful texture work don’t disappoint.