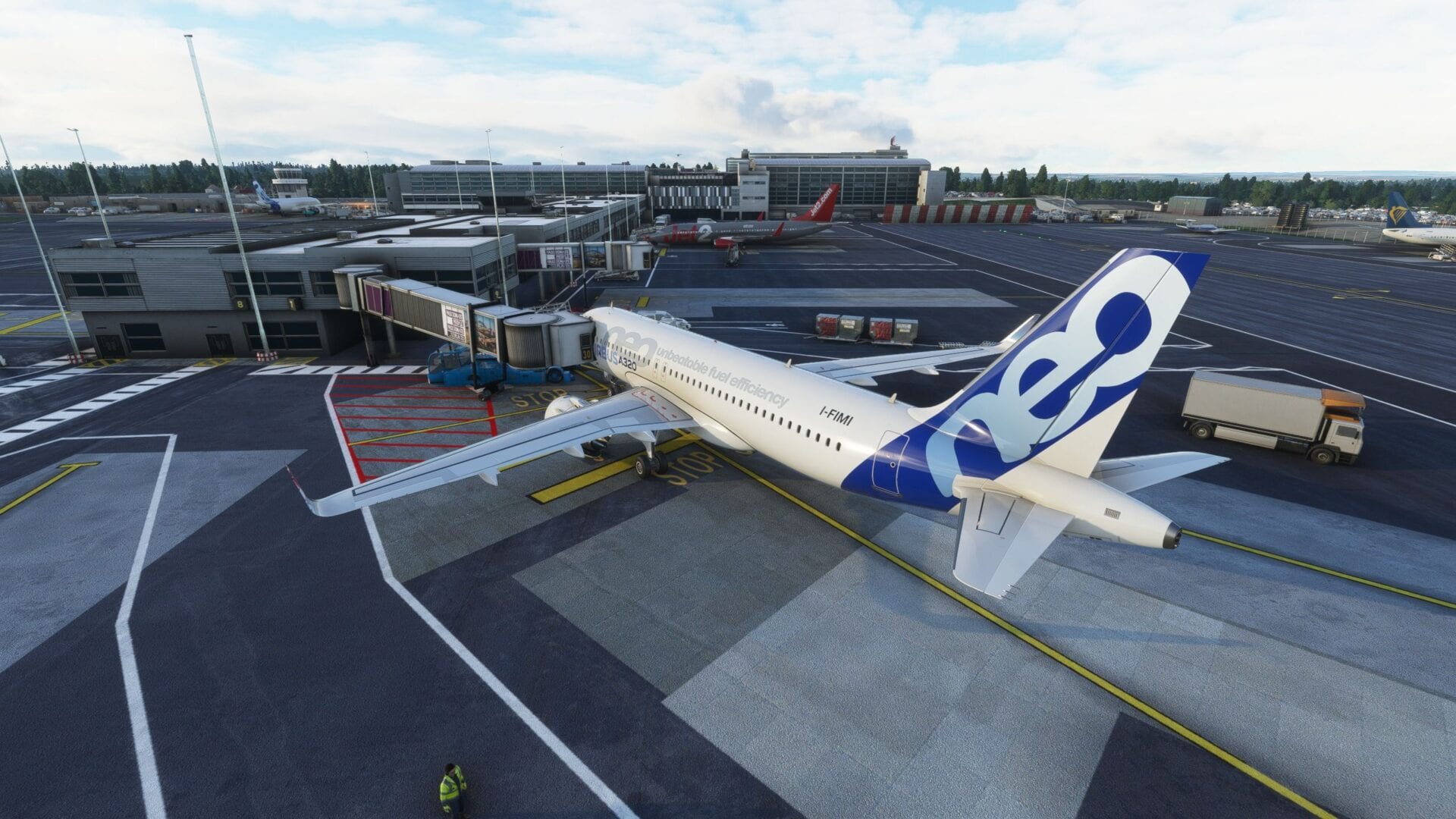 With the release of Microsoft Flight Simulator, third-party developers have been launching many add-ons including scenery, aircraft, and more.

Despite the fact that the concept is similar to DLC, their number and pricing may be unfamiliar to those approaching the flight simulation hobby for the first time. The result is that it’s often challenging to know where to invest to improve your experience.

For that reason, we have decided to start reviewing an ongoing selection of add-ons, hopefully providing you with a clearer picture of what to expect before purchasing a certain airport or aircraft.

Given its mix of commercial, cargo, and general aviation traffic, on top of both international and domestic flights, Newcastle offers a balanced experience regardless of which aircraft class you enjoy flying. It’s also going to be a valuable base when the United Kingdom World Update launches in January, greatly enhancing the surrounding scenery.

The package, priced at $18.51 on Orbx’s own store, is easy to install thanks to the developer’s Orbx Direct client. This is nearly as intuitive as the in-game store in Microsoft Flight Simulator but offers the advantage of quicker updates when the developers make changes and tweaks (which is very likely considering the upcoming World Update).

Once installed, you’ll find that the scenery included focuses mostly on the airport itself, but it does include a few buildings in its surrounding area.

The custom ortho that forms the foundation of the airport is high-quality and blends nicely with the default scenery. If you want to see what the airport looks like in extreme detail, you can find a large gallery of screenshots here and enjoy a full flyover video below.

The rest of the texture work is mostly nice and sharp, with a few lower-definition areas located usually where you wouldn’t look during normal operation. The quality of some smaller signs is also a bit inconsistent.

Runway and taxiway markings are quite accurate and blend well with the tarmac and lighting. I found very few imperfections, which is certainly way better than average. The typical “patchwork” texturing that you can expect from a runway that was built in the sixties and the surrounding aprons is also very nicely done, showing the effect of gradual repairs over the years.

The same can be said about the weathering of the buildings, which feels natural and blends well with the rest of the scene.

The 3D models of the terminal and gates are very detailed and visually enjoyable, and the same can be said about surrounding buildings like the control tower and its iconic “Emirates” logo, the fuel depot, the Newcastle Aviation Academy, the Fire Training Academy, and the Freight Village.

Things become a little more spotty landside, where I noticed a few missing signs, gates, and fences, but nothing major that could potentially ruin immersion.

Vehicles and general clutter are also realistically positioned all over the aprons, providing the appropriate environment when you start from cold and dark or taxi to a ramp after landing. The colorful and detailed livery of the shuttle buses is a particularly nice touch.

Unfortunately, the interiors of the terminal and control tower are not modeled, and as a consequence, the glass panels are not see-through. That being said, their semi-reflective nature doesn’t look bad during the daytime. To be fair, this isn’t yet an industry-standard feature, although I do wish it was.

That being said, the lack of terminal interiors likely helps performance, which is very good. The difference between the (fairly dreadful) default airport in Microsoft Flight Simulator and Orbx’s rendition hovers between 2 and 4 frames-per-second on my PC (RTX 3070, Ryzen 9 3900x, 32 GB RAM) at 1440p resolution. You can see the difference below.

The buildings outside the airport’s perimeter, including a few hotels, are nothing to call home about, but they do their job considering that they’re not supposed to be seen from up-close during normal operation.

The aprons have a few static aircraft that aren’t too intrusive and do a decent job to enhance immersion. That being said, they cannot be easily disabled, and I hope that Orbx will offer the option to remove them when we finally get good AI traffic to populate airports.

The instrumental landing aids work well, enabling buttery touchdowns straight on the centerline, with the ILS on Runway 25 perhaps aiming slightly lower than I would expect. That being said, I have a feeling this is more on the base Microsoft Flight Simulator’s side and not Orbx’s responsibility.

The scenery reacts very well to rainy conditions, while the night lighting is perhaps a tad sparse. On the other hand, snowy conditions tend to be patchy, but again, this last issue may be more on the side of the work-in-progress software development kit.

Ultimately, Orbx’s Newcastle is a good airport, beautifully modeled and detailed. While there is a bit of room for improvement in certain areas, it’s definitely (and perhaps unsurprisingly) a massive upgrade compared to the default scenery.

If you want to build up your collection of airports in advance of the UK World Update and if you enjoy a balanced mix of airliner, cargo, and general aviation flying opportunities, this is certainly an add-on I can recommend.