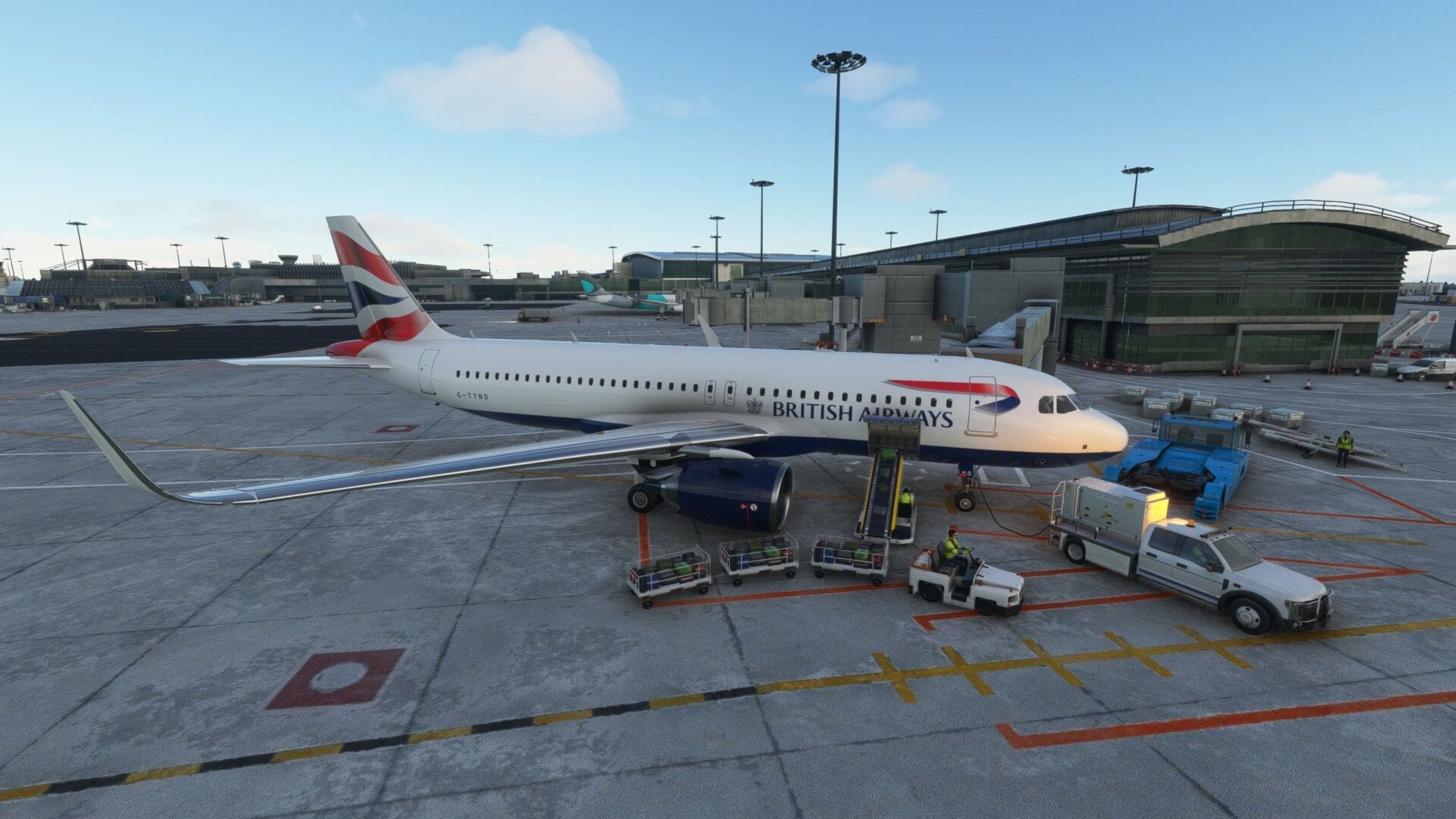 Dublin is the gateway to Ireland, and it’s the perfect base for those who like to fly airliners across almost every continent. We still don’t know if the upcoming World Update dedicated to the UK will actually involve Ireland as well, but this airport is still a good starting point to enjoy the new scenery regardless.

The add-on, priced at $19.51 on Orbx Central, can take advantage of the publisher’s client for ease of installation comparable with Microsoft Flight Simulator’s internal market.

It focuses exclusively on the airport, without additional landmarks or buildings outside of its perimeter. That being said, this is a large international airport, so it brings a lot to the table.

If you want to see what it looks like in extreme detail, you can find a large gallery of screenshots here and enjoy a full flyover video below.

The biggest issue with the package is that the reproduction is a bit outdated: runways 34 and 16 are represented as closed (and visibly crossed), while they have been recently reopened, and they’re also considered open by the simulator. This means that if you use the ATC, there will be times in which it’ll assign takeoffs and landings there.

The same may happen online in networks like VATSIM or IVAO. While I guess it’s not an irremediable issue functionally, landing and taking off on a crossed runway with no lights isn’t exactly immersive.

Update 1/25/2021: the airport has been updated today, reopening runway 34/16 and fixing the issue described above. On the other hand, the North Runway’s construction zone is still outdated as described below.

A milder but not inconsequential issue comes with the North Runway that is currently under construction. Its layout in the real world is now complete and the old Runway 12/30 has been fully removed. Unfortunately, this scenario portrays the North Runway half-built and the old one still present. You won’t end up landing on it as it’s not functional, but it’s not ideal.

I understand that it’s challenging to “freeze” a snapshot in time with an airport that is undergoing large-scale renovations, and it’s not easy to find good and recent photographic material, but a simple visit on the airport’s official Twitter account would have at least offered a starting point. I honestly hope that the developers at MK-Studios will update the scenery as the work progresses at the real EIDW.

The airport is built on custom ortho that blends well with the surrounding and showcases a nice tilled ground texture that gives it a very realistic look.

If you’re willing to overlook the outdated areas, the apron textures are actually very impressive, with great markings that blend well with the background, a ton of weathering that looks extremely realistic, and an overall fantastic finish.

Considering the complexity of the taxi areas, I’m rather impressed by how MK-Studios managed to closely reproduce every line and route.

On the other hand, the active runways look a little dark and some of the markings don’t match the real ones (even beyond the Xs that shouldn’t be there on 34/16). The touchdown zone markings follow the standard with three, two, and one lines indicating the distance from the threshold, but they’re actually single solid lines at the real airport. This appears to be an oversight.

Looking at the modeling of the terminals and piers, we’re welcome by high-quality work that provides a good reproduction of the airport’s iconic silhouette. Textures are well-weathered and detailed. They include a good implementation of PBR, and the developers made great efforts in depicting the complex airside signage with very small elements that certainly offer plenty of surprises and small nooks and crannies that often wouldn’t be modeled at all in the average scenery.

The same goes for other relevant buildings like hangars, the fire station, the radar, and the control tower.

Things are a tad less detailed landside, with parking slots and entry lanes that appear to be rather sparse. That being said, given the size and scope of the airport, this can be forgivable. You won’t notice it during normal aviation operations.

The interior of the terminals is partly modeled, with semi-transparent panels in some of the piers and in the main terminal.

The glass itself showcases texturing work that partly reproduces the interior, with an effect that is a bit weird when you move the camera. I understand this has likely been done to match the opaque glass where the interior isn’t reproduced. Personally, I would prefer developers to either go all out with modeled interiors, or simply stick to opaque glass instead of mixing the two solutions, but this is very much personal taste, and I have to respect going the extra mile to model some of the interior details.

The jet bridges are fully modeled and working, which is great, and MK-Studios correctly modeled different versions for different piers. Vehicles and clutter on the aprons are also satisfying, creating a lively and realistic environment to taxi and park. You have to appreciate the effort of placing mobile temporary lights in the construction area, despite the fact that the positioning is outdated, as mentioned above.

Speaking of lighting, it’s certainly adequate, providing a very scenic look when taking off, landing, and taxiing around after hours.

The functional placement of the parking areas appears to be slightly problematic, with the ramps in the west apron marked at gates. Landing multiple times on Runway 28L with an A320 I always found myself directed to park on the west apron, which is a bit anticlimactic. Granted, you can just ignore the standard ATC and go park at one of the piers, but it’s less than ideal. That being said, It’s challenging to gauge how much of this is an issue on MK-Studios and how much is due to Microsoft Flight Simulator’s own issues with the ATC and parking logic.

When the weather becomes inclement, Dublin mostly does not disappoint, with its texture work reacting extremely well to rainy and wet conditions. The only issue is the transparent glass conflicting with fog and rain, but this is most definitely an engine issue that MK can do little to nothing about.

Snowy weather is a little less spectacular. Most of the airport gets a nice coverage, but there still are some textures that get none. This appears to be, once again, mostly an engine-level issue that Microsoft needs to solve on its end.

For an airport of this size and scope, MK-Studios did a fantastic optimization job. On my own PC (RTX 3070, Ryzen 9 3900x, 32 GB RAM) at 1440p resolution and Ultra settings, I lose only 2 FPS with the scenery loaded as opposed to the default version, and never noticed visible stutters or performance issues.

With this perspective in mind, some of the less detailed areas landside and the interiors only partly modeled certainly find justification, and those with less powerful rigs will certainly find Dublin’s scenery less demanding than many.

The performance is certainly impressive considering the massive difference in detail compared with the default scenery. While the airport isn’t perfect, it’s still a giant improvement over what Microsoft Flight Simulator offers out of the box, as you can see above.

Ultimately, Dublin Airport is a product that shows high quality in many aspects, but it’s held back by the outdated reproduction of the real airport and a few gaps in research. If this isn’t a deal-breaker for you, you’ll likely enjoy it.

A timely update by MK-Studios to bring the environment and runways up to their current real-world state (followed by another when the North Runway is complete) would transform this scenery package from quite good to great.