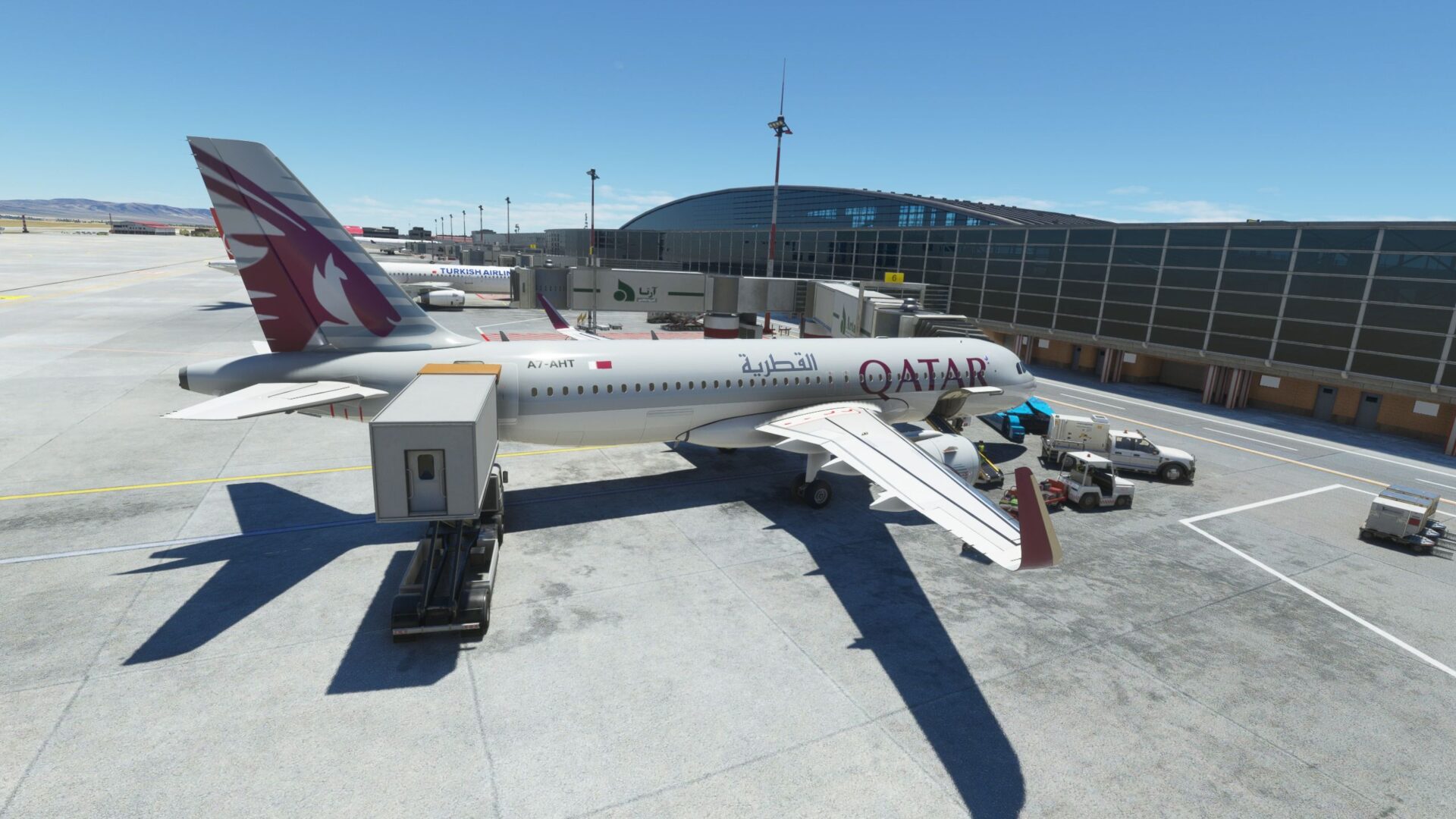 The airport itself is quite interesting as it shares airline traffic to and from the capital of Iran with its neighbor Mehrabad International Airport. OIIE handles all the international traffic, while Mehrabad is host to all the domestic traffic.

You could say that it’s a bit less scenic than Mehrabad, which is in the middle of the city and closer to the mountains, but it’s the perfect gateway to fly in this country that looks absolutely beautiful from above.

It’s currently available on SimMarket for approximately $18 and comes with its own installer.

If you’d like an extensive look at the scenery, you can watch an ILS approach and landing on runway 29R in the first video above, and a full flyover in a variety of lighting and weather conditions in the second video below.

Published approaches, SIDs, and STARs are all available, and the ILS glideslope (29R is the only runway equipped with it) and localizer are well-calibrated. The VOR Approaches to runways 11L and R also work correctly, while the PAPI lights for visual approaches are spot-on.

Taxiways and parking ramps are correctly implemented according to the charts, so the default ATC will provide effective guidance to and from the runways and the AI doesn’t appear to have any issue navigating the airport either.

All ground services are implemented and active, including the fuel trucks.

There is no custom ortho imagery at the base of the airport, which means that the terrain resolution and detail aren’t stellar, but I haven’t found this particular issue to be a massive one, considering that Microsoft Flight Simulator already includes decent aerial photography on its own.

Runways, taxiways, and aprons are very well textured, with good detailing, weathering, and stains that make all surfaces look quite natural. Only the markings are just a little too bright and cartoony for my taste. Taxiway numbers on the secondary apron in front of the Salaam International Terminal also have a visible see-through “square” outlining the decal. It isn’t very visible, but it can be slightly disturbing if you squint.

That being said, all markings and materials are correctly portrayed and up to date.

The true stars of this scenery are the buildings, starting with beautiful terminal buildings with very detailed interiors. They’re masterfully modeled and textured both airside and landside, with a level of complexity that you don’t see in many airports, topped by effective weathering.

The jetways of the main terminal are custom-made, well-detailed, and realistic. On the other hand, those of the Salaam International Terminal (which is a bit out of the way, so I guess they’re less visible), come from the default Microsoft Flight Simulator and aren’t a very good representation of the real ones, which include glass in their structure.

The same level of detail extends to all the other buildings in the airport, including the tower, hangars, VIP terminal (or “CIP” as they’re called here), offices, fuel depots, and more. Even beyond the fence (and yes, the airport’s perimeter is fully fenced) the high level of craftsmanship remains consistent for things like the train station and the nearby hotels.

It’s actually rather rare to see airports in which the level of detail doesn’t drop as you move away from the main terminals to more peripheric buildings, but here it remains impressively consistent. The only issues are the jetways mentioned above and the train tracks, which suffer from the low-ish resolution of the default background aerial images. Due to the nearly invisible tracks, it’s really hard to understand that the train station is what it is unless you already know.

Plenty of additional details like vehicles, signage, flags, clutter, and more add a lot of flavor to the scenery.

I was particularly impressed by the great use of physically-based rendering across the board. I don’t know many airports in Microsoft Flight Simulator in which the buildings’ materials look as realistic as they do here. It’s just spot-on and feels very natural.

The developers opted to include static aircraft, but they are optional and you can toggle them off while installing the scenery. That being said, they took the rather rare step of licensing payware AI aircraft originally made for P3D by a dedicated developer, and they look really good.

The only thing I’m not sure about is that they included a few that would definitely fly on domestic routes, so I have doubts on whether they would appear at Imam Khomeini. Those would probably be more appropriate at Mehrabad.

The airport reacts without any issue to the weather, with textures looking great in the rain and believable snow coverage. If you’re wondering, yes, it does snow in Iran, and HomaSim did an above-average job with it. Admittedly, the average in Microsoft Flight Simulator is still quite mediocre, but there are few flaws to spot here.

Night lighting is superb, both for exteriors and interiors, creating a very realistic effect across the board. The only small blemish is that the textures of the VOR antenna seem to have been set as emissive, so it stands out at night a lot more than it should, also looking rather flat.

Performance isn’t bad. On my PC (RTX 3070, Ryzen 9 3900x, 32 GB RAM) at 1440p resolution and Ultra detail settings, I lose about 9-11 FPS compared to the default scenery in Microsoft Flight Simulator with the static aircraft active. Considering how much detail has been added (you can see a comparison above), this is definitely more than acceptable.

HomaSim is, as far as I know, a new developer from Iran, and I was very impressed by the level of craftsmanship involved in this add-on. It certainly proves once more that you will find quality even beyond the usual established studios, especially among local teams passionate about bringing a glimpse of their own country to the world with the help of Microsoft Flight Simulator.

If you’re interested in flying in this beautiful region and above its gorgeous mountains, Imam Khomeini International Airport is definitely easy to recommend. This is certainly a developer I’m going to keep an eye on. 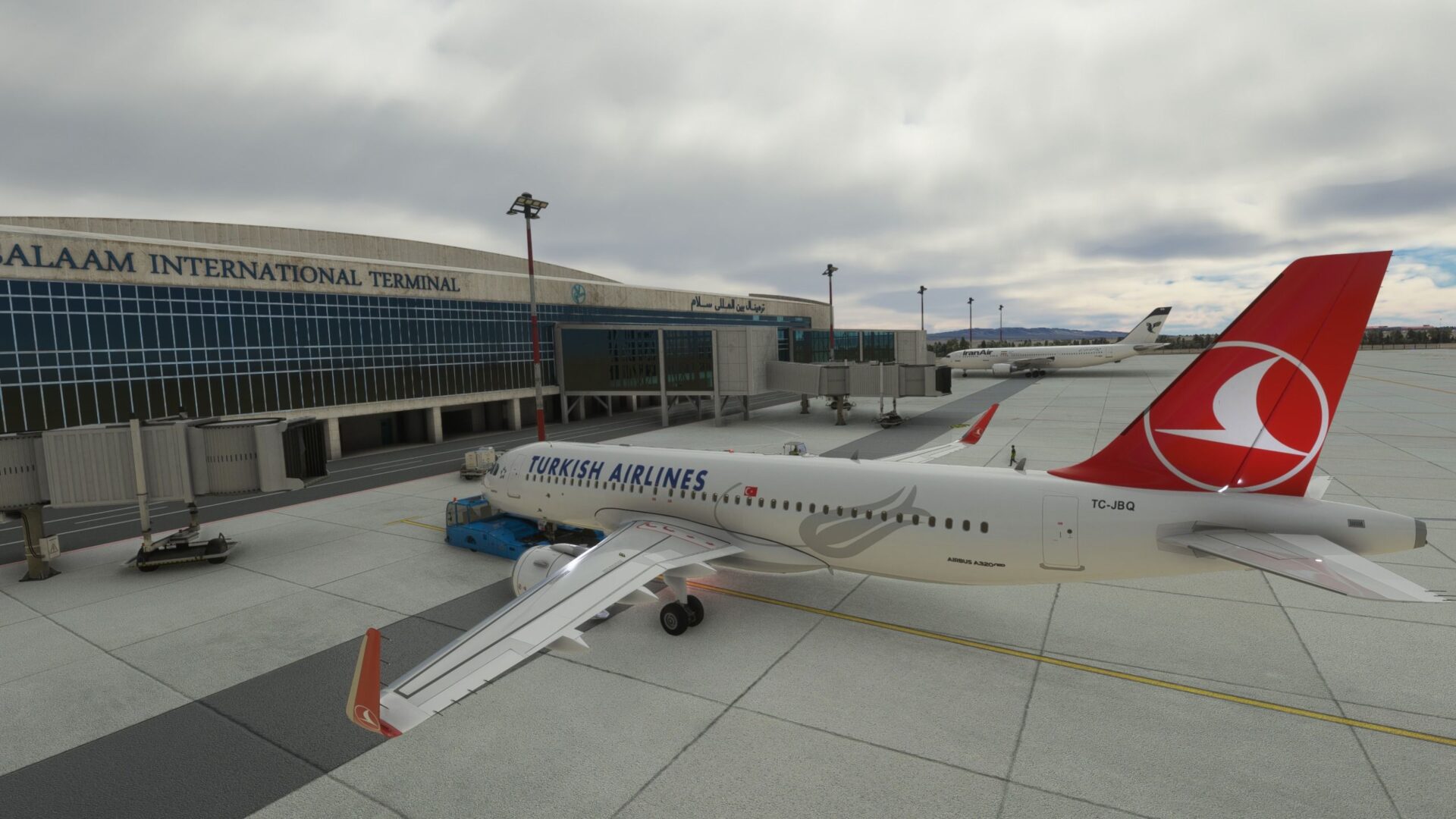