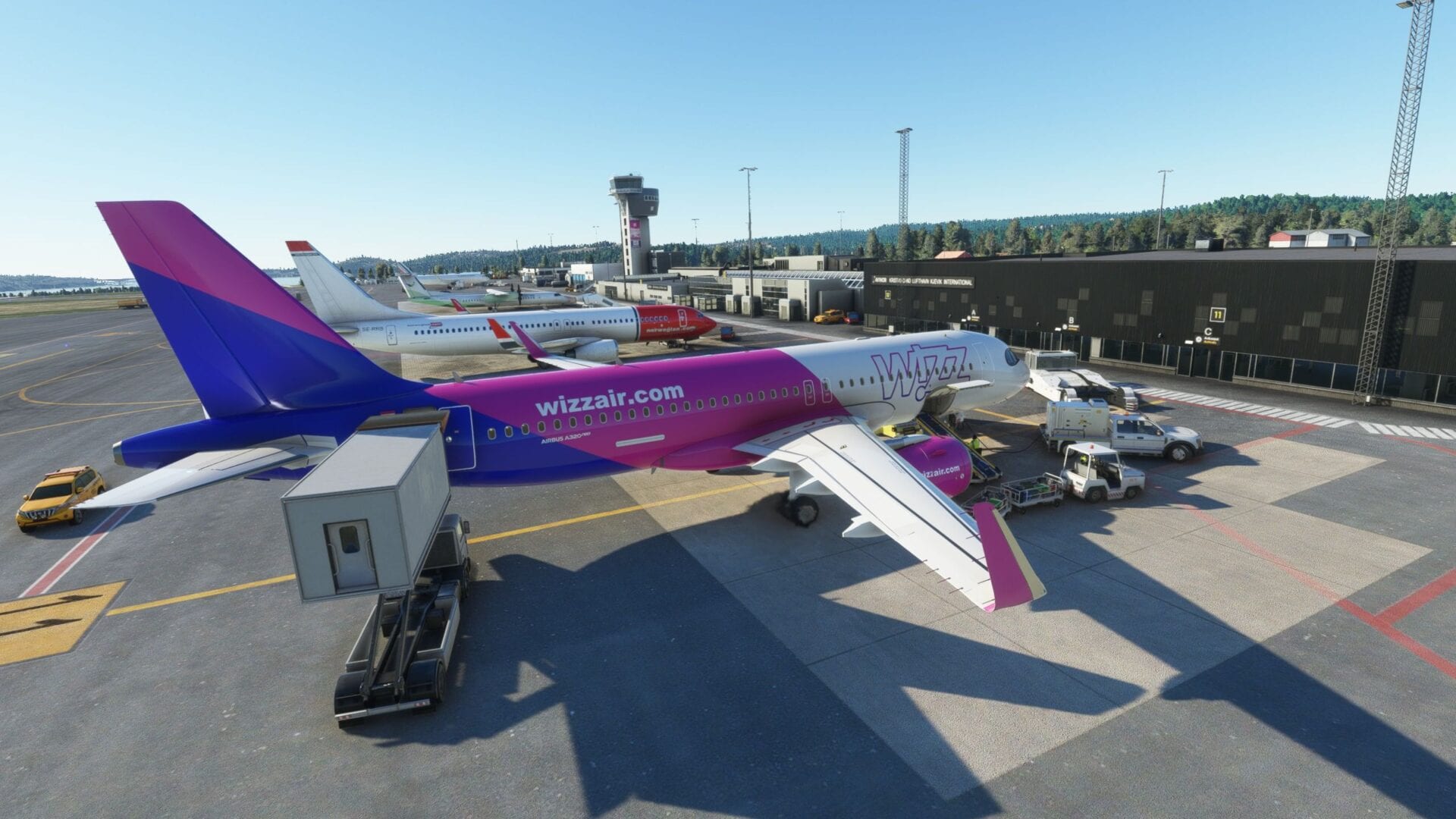 ENCN isn’t a massive airport, being only the ninth-busiest in the country, but it gets a nice mix of airliner traffic (both regular and seasonal) and general aviation.

It also has a fairly short and relatively challenging runway with glide angles that are slightly steeper than the norm. The approach to runway 03 is very scenic, overflying the beautiful Topdalsfjorden and the city of Kristiansand.

Incidentally, below you can see said approach in detail, while the second video is a full flyover showing the airport from every angle and in every condition.

Like all Gaya add-ons, this is available on Orbx Direct for approximately $18, which means you can install it and keep it updated comfortably with the Steam-like Orbx Central client.

The runways, taxiways, and aprons are quite precisely reproduced. The materials are true to the current state of the airport, and the weathering is well-done.

The developers even went as far as to showcase the grooving on the runway and modeling the engineered materials arrestor system at each end in 3D, which is certainly a nice touch.

The runway and taxiway markings are good but not entirely perfect. It’s noticeable that a lot of research went into them. Both Google and Bing Maps are dreadfully outdated, but the scenery is indeed mostly up to date.

The circles marking the general aviation ramps are the only outdated part I could find since they’ve been repainted with dashed green lines relatively recently. The chevrons on the arrestor system should also continue on the asphalt but they don’t in this scenery.

The lines and numbers are nicely weathered and feature just the right balance of brightness and realism. That being said, there are some misalignment issues where the different pavement at gates 12, 13, 14, and 15 borders with the tarmac.

This also extends to most of the gate and ramp numbers, some of which are so out of alignment that they spill out of their boxes. In the real world, they’re centered. This appears to be a glitch that slipped past QA as opposed to a reproduction mistake.

The terminals and towers are beautifully reproduced, with realistic textures and great modeling. Their interiors are also fully modeled, with plenty of details visible from the gates when you prepare to take off or park after landing. Generous use of physically based rendering helps a lot in making everything look natural and nearly photorealistic.

The only small issues I can find are the fact that (for reasons unknown) only the arrivals terminal has people inside, and the use of generic templates for the advertisement billboards. I’m aware that they’re not supposed to be seen from up-close, but reading “flower shop ad banner template, PSD file included” is quite hilarious. I understand that it’s not always possible to use real ads, but since the developers decided to work with templates and given the overall excellent attention to detail, they could have populated them instead of slapping them on the billboards as-is.

The landside is equally detailed and very nice overall, but it lacks the roofs connecting the parking area and the terminal entrances built last year.

Don’t get me wrong, most of these issues are nitpicks, and won’t detract much from the experience, but there is always room for improvement.

The airport also includes many satellite buildings and hangars, that also feature an excellent level of detail. The developers even included the static “FN-K” Spitfire L.F. IXe Replica and the “T3-H” RF-84F Thunderflash displayed within the premises, going as far as giving them correct liveries and markings.

There is even an operational gate leading to a group of hangars on the other side of the road which actually opens and closes as vehicles pass.

Further details include quite a few houses in the neighborhood (some of which hover slightly above the ground, which could use addressing), the firefighting training area with its correctly reproduced dummy plane, and the nearby Varodd Bridges connecting Kristiansand with the other side of the Topdalsfjorden.

The bridges are reproduced correctly including the second one built in 2020 and even the stumps of the old one that was recently torn down.

The developer even created a couple of dedicated vehicle models with the appropriate Widerøe and Avinor (the airport’s operator) markings. One of them is a Toyota Land Cruiser and Avinor indeed owns some of those. I actually could only find evidence that Mitsubishi Outlanders operate at Kristiansand, but this doesn’t mean there isn’t any Toyota, and I may really be going too deep into the nitpicking rabbit hole here.

Having dedicated vehicles in addition to the default ones adds flavor that 99% of the available scenery for Microsoft Flight Simulator doesn’t have.

The static aircraft are decent but not exceptional, and as usual I hope that an option to remove them is added down the line. They’re a nice decoration now, but they will become redundant when we get a good AI solution.

I have found no major issues with the functional features of the airport. All the ground services are implemented and available.

Taxiways are correctly labeled, and ATC provides clear guidance to and from the runway. The approaches work correctly and the PAPI lights are well-calibrated.

The only snag I noticed is that the gates are marked as cargo ramps. This is not the first time I see this in scenery by Gaya (Firenze is another example) and I honestly have no idea of the reason why the developers may have picked that option.

The airport features good night lighting, with well-lit aprons and buildings and mostly-correct runway and taxiway illumination. The only two small issues are the lack of a few lights on the runway aiming point stripes (which are present in the real airport) and a couple of houses with roof textures that have been erroneously set as light-emissive, and shine in the dark as a result.

Snow coverage is fairly good, with only a few imperfect spots that seem to be almost inevitable when snow accumulation interacts with some materials in Microsoft Flight Simulator.

On the other hand, there is a strange issue with rain on the main apron, with an area close to the gates and more spots around some of the markings that pick up a heavier “wet” effect than the rest, resulting in a visible discrepancy with the surrounding materials.

Optimization and performance are excellent, with my PC (RTX 3070, Ryzen 9 3900x, 32 GB RAM) losing only 1-2 frames-per-second at 1440p resolution and Ultra detail settings compared to the default scenery.  Considering that Gaya’s add-on improves the airport massively, adding a ton of objects and details, this is impressive.

Ultimately, Gaya’s add-on is very good, with a great level of detail and plenty of elements to enjoy, including a spectacular approach over the fjord. Yet, it has a number of small flaws here and there that hold it just short of greatness.

That being said, it’s doubtless that the improvement over what Microsoft Flight Simulator offers by default is massive, so Kristiansand is still easy to recommend if you’re looking for a nice new destination in Norway.