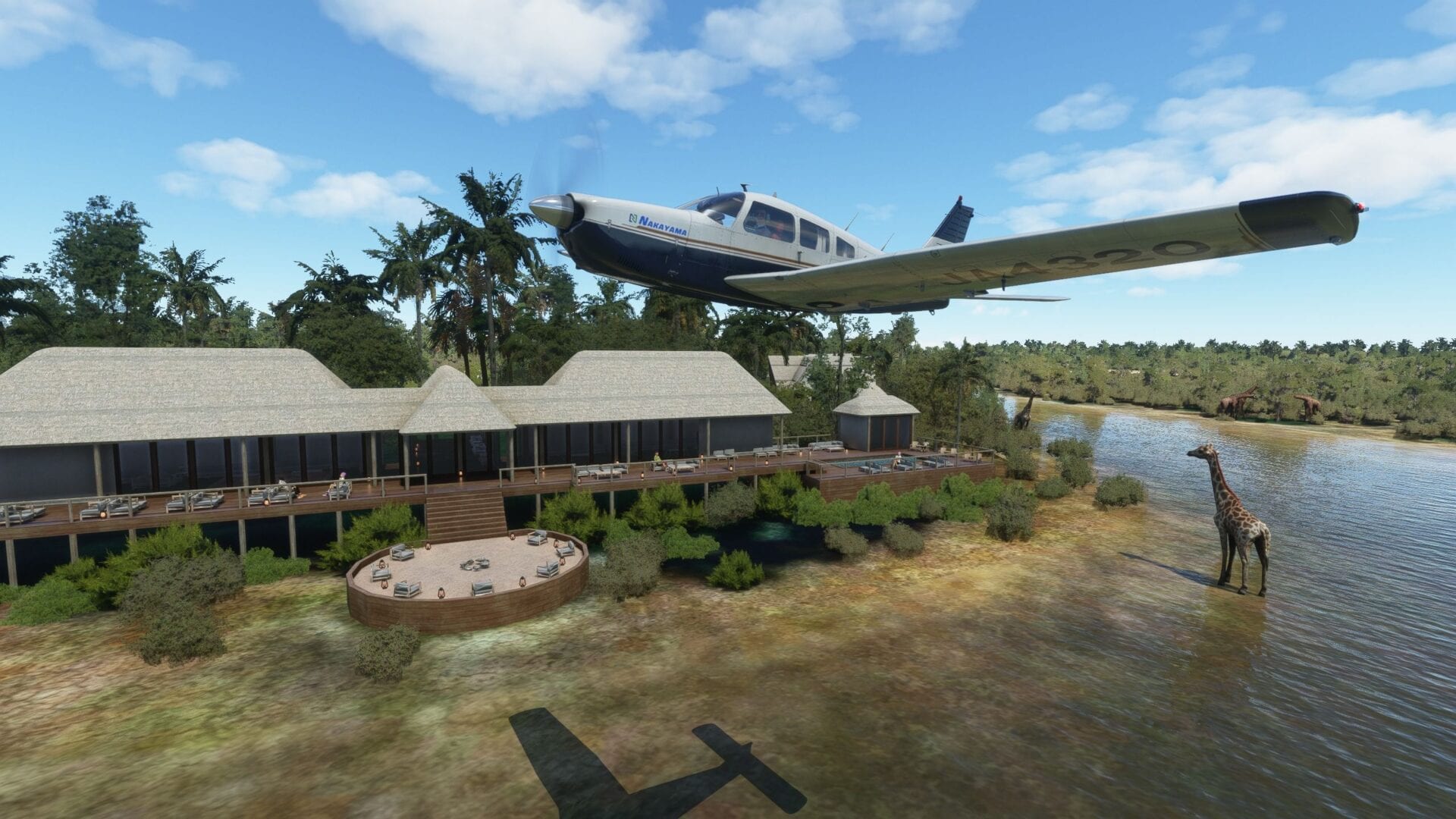 While most scenery add-ons include a single airport or city, and they’re dedicated to reproducing scenery with the utmost precision, this package focuses on adventure and exploration.

The Okavango Delta area in Botswana, Africa, is a vast wetlands area rich in flora and fauna, named one of the seven wonders of the continent. Despite its name, the Okavango river doesn’t flow into any sea or ocean, but the water spreads across the land and then mostly evaporates or seeps back into the ground, creating a rather unique landscape.

It’s a popular attraction for tourists, considered by many the perfect location for a safari adventure. That’s exactly the concept of this add-on.

You can purchase it on Orbx Direct for approximately $30, which means that installation and updates are fully painless due to the handy Steam-like Orbx Central client.

In the video below, I tried to capture what the add-on looks like, so you can get a better idea of what kind of flights you can enjoy.

The area doesn’t include any major airports (the closest, Maun, isn’t included), but it comes with nine airstrips reproducing some of those present in the real world. They’re not complex scenery, but they’re nicely modeled and textured with sparse small buildings, static aircraft, equipment, offroad vehicles, and a few tourists that just landed or are about to depart. There are also plenty of helipads ready for when Microsoft Flight Simulator will support helicopters.

The other major manmade element is represented by camps designed to host tourists and visitors. They are quite fetching, with full interior modeling, great night lighting, and plenty of guests lounging around, working out, and observing the animals.

The quality of their modeling and texturing is very good, creating believable angles of paradise for you to explore and enjoy. On the other hand, the camps feel a bit monotonous, with types of buildings and materials that feel very similar in every location.

Speaking about animals, they’re the real stars of this add-on. SimWorks Studios scattered 12,000 of them all over the area, letting you encounter plenty of lions, giraffes, elephants, hippopotami, zebras, antelopes, African buffalos, rhinos, and crocodiles.

They’re well modeled and rather believable from above, with some (limited to elephants and giraffes) walking around in packs, while others are static, creating nice little scenes to discover while exploring.

Unfortunately, not all are animated, and you’ll find some that are completely static. That’s a bit jarring, and I wish the developer included animations for all the fauna.

On the other hand, the locations where you’ll find them feel believable, which adds to the immersion as long as you keep your distance from the animals that aren’t animated. Some of the species are also rather rare, rewarding exploration and turning spotting them into an adventure in and of itself.

The many tourists populating the camps are also mostly static, with a bit more repetition among models than I’d like.

The package includes a couple of bush trips to show you around. They provide a good starting point for your exploration, but I wouldn’t blame you if you simply picked a light aircraft, spawned at one of the available airstrips, and took off to explore on your own. I found that it’s more fun that way, and fun is all this package is about.

Of course, you shouldn’t expect to fly airliners here, or at least not the big ones we have in Microsoft Flight Simulator at the moment. I can imagine this scenery will be just perfect when we finally get a Twin Otter, but for now, this is a playground for light general aviation aircraft.

“Playground” is probably the perfect definition for this add-on, and it’s a concept that I hope will be expanded and translated to other areas. This could easily spawn a series of “virtual tourism” add-ons in the most beautiful and least accessible areas of the world, mostly served by small airstrips.

I can certainly imagine this concept applying perfectly to places like Nepal, New Guinea, the Amazon Rainforest, many places in South-East Asia, and more. Spruce up the airfields, add villages and points of interest, and you have great tourist destinations to explore in the simulator. I can see this happen and I hope it does.

While the execution is mostly good, there are a few issues here and there.

First of all, the package comes with very sparse documentation, and the most important piece is missing: the perfect complement for the scenery would be a detailed VFR map allowing you to navigate simply with visual references. A map is included, but it doesn’t offer nearly enough details to be used for navigation.

This is a pity, because this is quite literally the perfect location for VFR flying. If you’d like to do so without having to resort to the GPS, you’ll have to find your maps through independent means.

While the Okavango Delta area is interesting, it’s also a bit monotonous. It’s a massive span of wetlands that is nearly completely flat. There are streams and lakes aplenty, but I’d have selected a location with rougher terrain (hills, mountains, and so forth) to make the exploration more engaging and the novelty last longer. Hopefully, more similar add-ons will come including diverse terrain.

The quality of the terrain itself for such remote areas of Africa in Microsoft Flight Simulator isn’t the best due to the lack of high-resolution aerial ortophotos. The result is that the terrain looks rather grainy and blurry if you fly low, while it becomes much more enjoyable when you fly much higher, but then you’re too high to spot the animals.

This is not to say that the place isn’t beautiful. In general, it really is, but there are places in which the illusion doesn’t hold as well as in others.

Performance appears to be perfectly fine, as the scenery isn’t as complex that it would cause considerable slowdowns, at least on my PC (RTX 3070, Ryzen 9 3900x, 32 GB RAM) at 1440p resolution and Ultra detail settings.

Incidentally, SimWorks Studios promised to release a freeware drivable off-road vehicle to let you visit the area and enjoy it from a different perspective, so that’s something else to look forward to.

Ultimately, Okavango Delta shines in its uniqueness. While the execution isn’t always perfect (but it’s quite good overall), it’s a great concept with a lot of potential in Microsoft Flight Simulator.

If you want a break from flying complex airliners and would like to enjoy a safari adventure in the heart of Africa, this add-on is easy to recommend. Hopefully, the concept will be perfected and further expanded, because it’s certainly very promising.