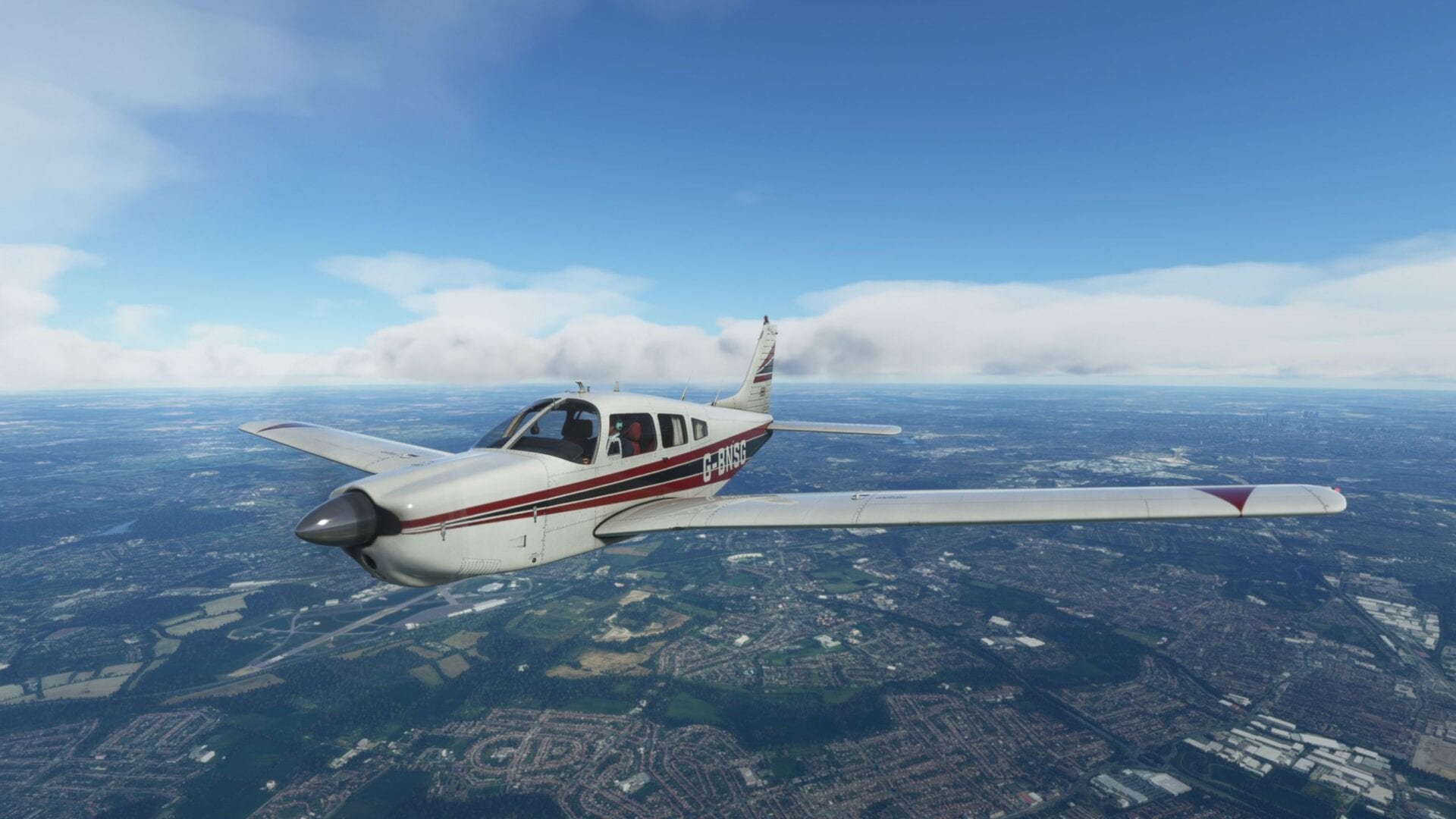 The add-on can be purchased at Just Flight’s own store for $44.99. The installation is easy and painless via its own dedicated installer, so you don’t need to fiddle with folders and moving files around.

Once installed, you’ll find a handy folder in your Start menu including the extensive manual and a link to the paint kit.

This is especially useful considering that there are about a gazillion PA-28R’s in the world, and they all look different.

The package itself comes with 11 liveries from a variety of countries (four from the UK, two from the USA, one from Canada, one from Switzerland, one from Germany, one from France, and one from Australia), which certainly add to the value.

Yet, if you want something different, you’ll have to do your own or download one of the many that are already been created by artists from all over the world.

The paint kit is very nicely done and easy to use if you have the skills with Photoshop or similar programs. To prove the point (and because I’m a bit of a weeb even in flight simulators), I made my own livery based on a real Arrow III from Japan. As a bonus, you can download it here and see it in action in the first video above, showing a full flight from Yao to Chofu in Japan.

While I’ve designed a lot of repaints in the distant past, I hadn’t done it for several years. Yet, thanks to the quality of the paint kit and the well-organized texture mapping of the 3D model, doing this was a breeze.

The manual is well made and rather complete. While it isn’t perfect (for instance it explains only one of the three Garmin GPS units available), it’s good enough to get most users with basic experience in flight simulators up to speed.

Moving on to the aircraft itself, the PA-28R Arrow III is one of the many, many variants of one of Piper’s most classic products. It’s not super-powerful and doesn’t come with exceptional performance characteristics, but it’s a great plane for short and medium-range VFR hops and enjoying the landscape and the vistas much better than you’d do on airliners or larger aircraft in general.

That being said, it also comes with decent IFR capabilities, if that’s what you prefer.

In terms of the way Just Flight implemented the simulation, this definitely qualifies as the most advanced general aviation aircraft released so far for Microsoft Flight Simulator. Every single switch and knob in the cockpit can be operated all the way to the circuit breakers, which is very rare.

It’s hard to say if it qualifies as “study-level” or not, as I don’t really care for the definition and it’s always quite fluid depending on who you ask to. Yet, I’d say that if you want an aircraft that will challenge you to actually learn quite a lot about flying a general aviation plane of this class, this is the add-on for you.

That being said, it’s not an extremely difficult aircraft to fly. It’s rather docile and its controls aren’t overly-complex even in the real world.

You could say that it’s easy to learn and harder to master, especially if you want to push its flight characteristics. The second video features a flight from Kathmandu to Lukla in Nepal, to test the aircraft in more extreme conditions. It certainly can be done, but you better be prepared to squeeze every bit of climb rate out of it, and that takes some learning and skills that are a bit more advanced than the usual sightseeing flying.

You should also keep in mind that the Arrow III doesn’t have the best equipment to fly in icing conditions, so you may want to avoid these clouds if you can.

It comes equipped with a rather basic autopilot with no vertical navigation capabilities. It’ll lead you nicely from VOR to VOR, line-up with a localizer, and follow a GPS route well enough (and with the correct degree of realism), but vertical navigation and speed management will all depend on your hand-flying and trimming abilities.

It’s supported by three generations of Garmin GPS units that you can swap around at your leisure, 100, 430, and 530, depending on what you like.

This level of customization is really nice to have, and it’s matched by the choice between a horizontal situation indicator (HSI) or a simpler direction indicator.

Incidentally, I kind of lied. While the autopilot indeed doesn’t have vertical navigation capabilities, the aircraft does. There’s an “invisible” altitude hold switch around the “Piper” logo of the autopilot mode selector. This is not realistic (which is why it’s invisible), but it’s good to have for those who don’t want to spend a whole long flight trimming their aircraft all the time or simply want to go stretch their legs. If you’d rather not use it, you can simply ignore its existence.

Another concession to convenience is the ability to have the selection of the fuel tanks done automatically. In this kind of aircraft, you need to preserve balance by switching periodically the source of your fuel between the left and the right tank. This is fairly easy to forget, so you can automate it. Of course, you can switch the option off if you want to do it the hardcore way.

Most of these options are controlled via an EFB (electronic flight bag) tablet that also lets you display a few cosmetic props when parked (chocks, towbar, and tie-down cables), open the cabin, baggage, and oil doors, hide the yokes, enable a visible copilot, refill oil and recharge the battery, and more. It’s a nice selection of extra options and you can even set it so that it’ll remember the conditions of your aircraft for the next flight.

The flight model feels very natural, docile and good for learners in combination with the uncomplicated but realistically simulated instrumentation.

All the parameters pretty much match what you would expect from this kind of Piper, and it’s visible that a lot of research went into recreating it. This shouldn’t be surprising, considering that Just Flight used a real one as a testbed.

The only thing that feels a bit off is that the aircraft taxis very easily on idle power on the ground, and accelerates to speeds that seem excessive unless you apply generous braking.

Everything else feels fantastic. Take-offs, landings, climbing (as long as you know the correct power settings), descending, and cruising are a real joyride.

Moving on to the visuals, the 3D model looks gorgeous and the textures are very well done.

Especially the weathering of the cockpit feels extremely authentic. The artists even implemented more wear and tear on the left side of the yoke, because that’s the only side that a pilot would hold for 95% of the time. Every little stain and scratch makes this aircraft feel like it has been “lived in” for a nearly-photorealistic look.

The instruments are super-detailed and nicely readable, and ultimately the interior view is a feast for the eyes.

Physically-based rendering has been used appropriately to give the fuselage the correct sheen whiteout making it look like it has been waxed for a parade. Combined with the well-designed liveries, the Arrow III is certainly quite the looker, but it isn’t perfect.

The only real complaint I have about the visuals is that Just Flight opted not to use the decal system implemented in Microsoft Flight Simulator, which enables extremely high resolution for stencils, rivets, and other small details while preserving performance.

Instead, the liveries are simply made of two 4096 by 4096 textures. While this ensures a good level of detail, Microsoft Flight Simulator’s decal system can achieve better results.

Another small flaw is that the rain will hit the glass even through the metallic frame of the storm window, but I guess I’m nitpicking here-

Let’s move on to audio, something I absolutely have no reservations about.

Here is where the fact that Just Flight has a testbed aircraft available really paid dividends: they obviously spent a lot of recording time with it, and pretty much every sound is bliss for the ears.

Each switch, lever, and knob seemingly has its own unique soundbites. The level of audio realism and immersion is unparalleled in Microsoft Flight Simulator, at least in the aircraft I was able to experience.

This isn’t limited to the controls, but you’ll also hear specific sounds for plenty of other events like tail strikes and wing strikes. Touchdown is very satisfying not just because it’s challenging, but also due to how it sounds.

You can open the storm window in flight, and the roar of the engine and the wind will change as you would expect.

If I could compare an aircraft to a symphony, this Arrow III would be the one I’d choose.

Last but not least, we have performance. While the simulated systems are a lot more complex than those included in the default general aviation aircraft in Microsoft Flight Simulator, my PC (RTX 3070, Ryzen 9 3900x, 32 GB RAM) handles the aircraft very well at 1440p resolution and Ultra detail settings. It holds a nice and comfortable 45 FPS in average over the countryside and I’ve never seen it dip under 30 even at the most crowded airports. There is also no appreciable difference between cockpit view and external cameras.

Ultimately, Just Flight’s PA-28R Arrow III does nearly everything right. It’s without a doubt the most advanced and polished payware general aviation aircraft available for Microsoft Flight Simulator at the moment of this writing.

The “study-level” catchphrase may or may not apply depending on who you ask to, but this is certainly an aircraft that requires a degree of study to truly master, but even more importantly, will help you learn and will reward you for it.