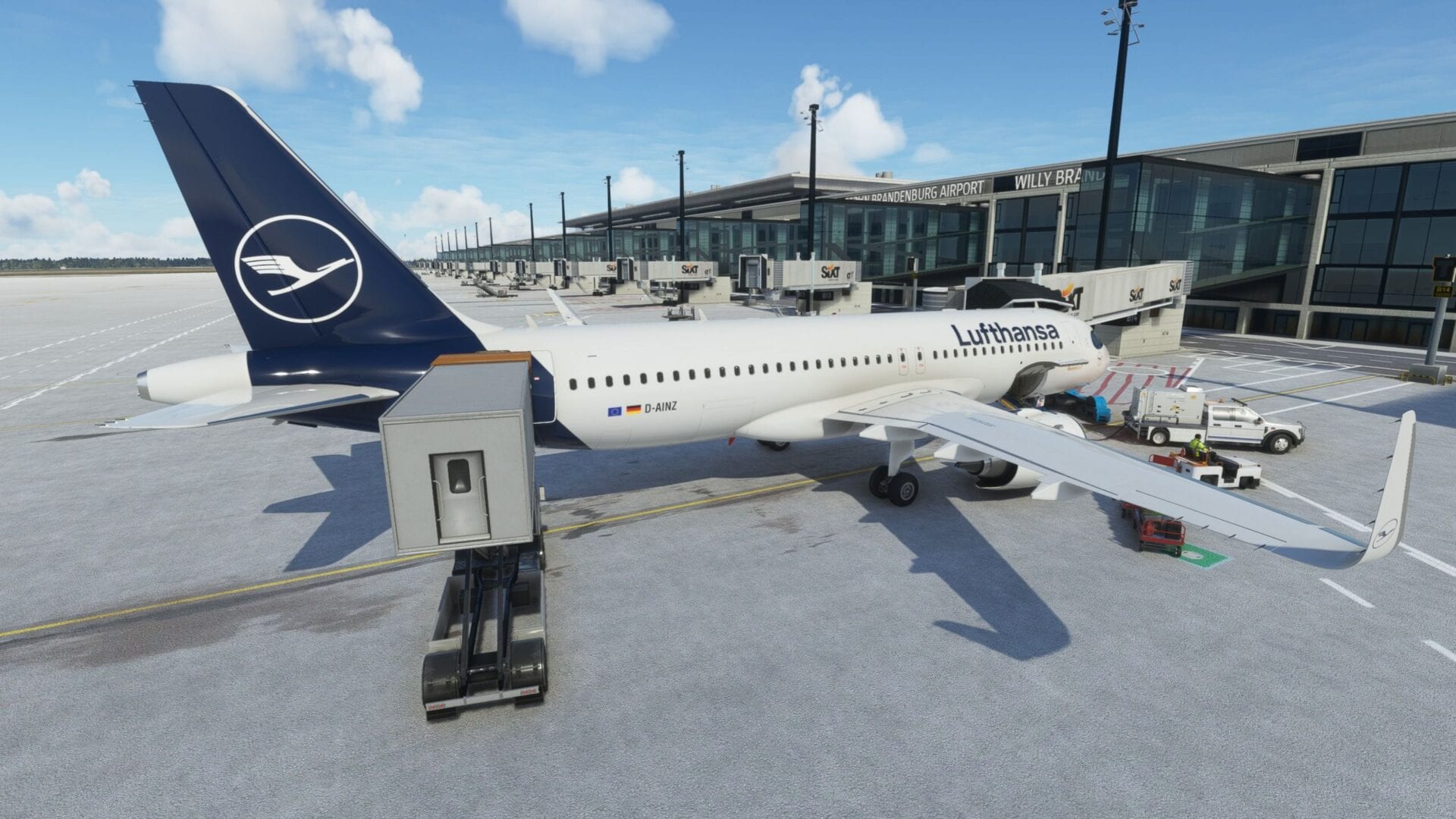 While it’s not the busiest airport in Germany, left behind by the likes of Frankfurt and Munich, it’s a very relevant hub with an important future planned.

It already sees a wide variety of airliner traffic, having inherited flights from its three predecessors, Schönefeld, Tegel, and Tempelhof.

General aviation and cargo flights are also common, and since Brandenburg Airport serves a national capital, you can simulate those VIP flights carrying politicians and dignitaries.

As a matter of fact, you’ll see the approach and landing (on runway 25L) of one of such flights in the video below, heading to the nicely modeled Government Terminal, using Aerosoft’s own brand new CRJ 550.

The second video showcases a more “mundane” approach and landing to the ILS on runway 25R.

The airport is available on Aerosoft’s own store for approximately €20 including applicable VAT.

It comes with its own installer and updater, so getting things up and running is rather painless.

Speaking of updates, one was released the day after launch to fix a few issues, some of which you’ll notice in the videos (a bump on 25L and duplicate markings on 25R and 7L).

It’s laudable that the developers worked quickly to fix things, so if you see them in the first two videos please disregard them. They’re no longer an issue, but it was too late to refilm everything.

The third video below showcases a full flyover of the airport in a variety of weather and lighting conditions. Since it was filmed after the fix, you’ll notice that the issues are gone.

The package also includes a set of charts, as most airports by Aerosoft. This is rather handy for those who don’t want to subscribe to chart providers or to look them up online.

Speaking of charts, unfortunately, the STARs for all runways are missing from the database. This is mostly an issue related to Microsoft Flight Simulator itself, which often has database problems for new airports or those that had recent changes. The only way (that I could find) to solve this issue is to subscribe to Navigraph and to use its updated database.

While this issue is not to be blamed on the developers of this add-on, it’s likely something you should know. Aerosoft has Microsoft and Asobo’s ear, so now that one of their major products is affected by the simulator’s relative sluggishness in keeping up with airport updates, maybe they’ll be able to bang on the right doors and get things moving a bit more promptly to get this fixed.

Another minor consequence of said sluggish updates of the base sim is that the now-closed Tegel airport (which was replaced by Brandenburg) is still represented as open and operative, and Brandenburg itself is still named Schönefeld on the map and by ATC, since it was built on top of the old hub.

The VDGS parking guidance isn’t functional, but this is still a quite rare feature in Microsoft Flight Simulator. Luckily, the developers promise to implement it as soon as the sim’s software development kit includes a reliable technical solution.

The rest of the airport is fully functional. All approaches work as they should, taxiways are correctly labeled ensuring that ATC will provide true-to-chart guidance to and from the runways, and all ground services are available, including the often-neglected fuel trucks.

Speaking of runways and taxiways, they’re well done, with good texture work and correct markings as far as I could see, but I would have appreciated more weathering on the older areas.

The developers did a good job simulating the patchwork of materials left by the fact that the airport is basically an expansion of Schönefeld, with the old tarmac definitely distinguishable from the new pavement.

Nearly everything appears to be up-to-date, which is laudable for such a young airport that has undergone major renovation very recently.

The terminals, towers, and all the main buildings are also well modeled. The new Terminal 2 even has visible interiors, even if they are perhaps a bit empty. Jetways are fully custom, animated and they look great.

The use of physically-based rendering has been applied nicely all over the airport giving it a realistic look that reacts well to all lighting conditions.

The government terminal mentioned above utilizes parallax shaders to give the impression of the interior, and perhaps it works even better than a fully modeled one in this case.

It even comes with the inevitable red carpet and a welcoming party for visiting dignitaries. It’s a nice touch.

Quite extensive work has been done beyond the borders of the airport, including the old Schönefeld station, the nearby shopping complex right under the approaches, the highways, and more. We also see some great work done on subtle elevation changes all around the hub.

This is something that I find very valuable in this kind of scenery. Many developers stop way too close to the runways when adding custom models, with the result that what you see while landing and taking off isn’t that close to what a real pilot would see.

Speaking of surroundings, EDDB is quite close to the city of Berlin itself, which means that you’ll get a very nice view of the city’s photogrammetry during your operations here.

On the downside, you can see quite a lot of textures that aren’t exactly high-resolution. That being said, it’s difficult to properly judge how much better the developers could have done on this front. The package is already 5.62 gigabytes and one of the biggest airports I’ve seen in terms of data footprint.

That’s not surprising considering how large the area covered is, so I’m not sure that much higher-resolution textures were feasible without weighing heavily on your video memory and performance as a consequence.

Incidentally, the scenery does perform very well. My PC (RTX 3070, Ryzen 9 3900x, 32 GB RAM) loses only a couple of frames-per-second at 1440p resolution and Ultra detail settings compared to the default scenery.

This is impressive, considering that Limesim’s work improves the airport massively, adding a ton of details and buildings.

There are no static aircraft in this scenery, but honestly, I don’t mind that. The value of their inclusion is always a subject of debate and your mileage may vary. Personally, I’m just waiting for a good AI traffic solution to make statics redundant.

Night lighting is mostly great. The floodlights on the aprons are spectacular, and the taxiways include beautiful custom models for their lights. The one flaw is Terminal 5, which appears to be quite dark behind the windows.

The airport also reacts quite well to weather, with rain interacting nicely with the generous use of physically-based rendering. Only the transparent windows stand out a bit too much.

Snow coverage is solid, perhaps even a bit too much. It looks good enough, but the airport tends to appear like it really needs a new brigade of snowplows.

Ultimately, Berlin Brandenburg Airport is a much-needed addition if you plan to fly to the capital of Germany. It isn’t 100% perfect, but its size, sprawling nature, and remote aprons create an interesting taxiing experience, and there is a lot to see.

It’s a massive improvement over the incomplete default scenery, while the attention to detail and extensive work done on the surroundings that you’ll see on departure and landing further improve the value of the add-on.