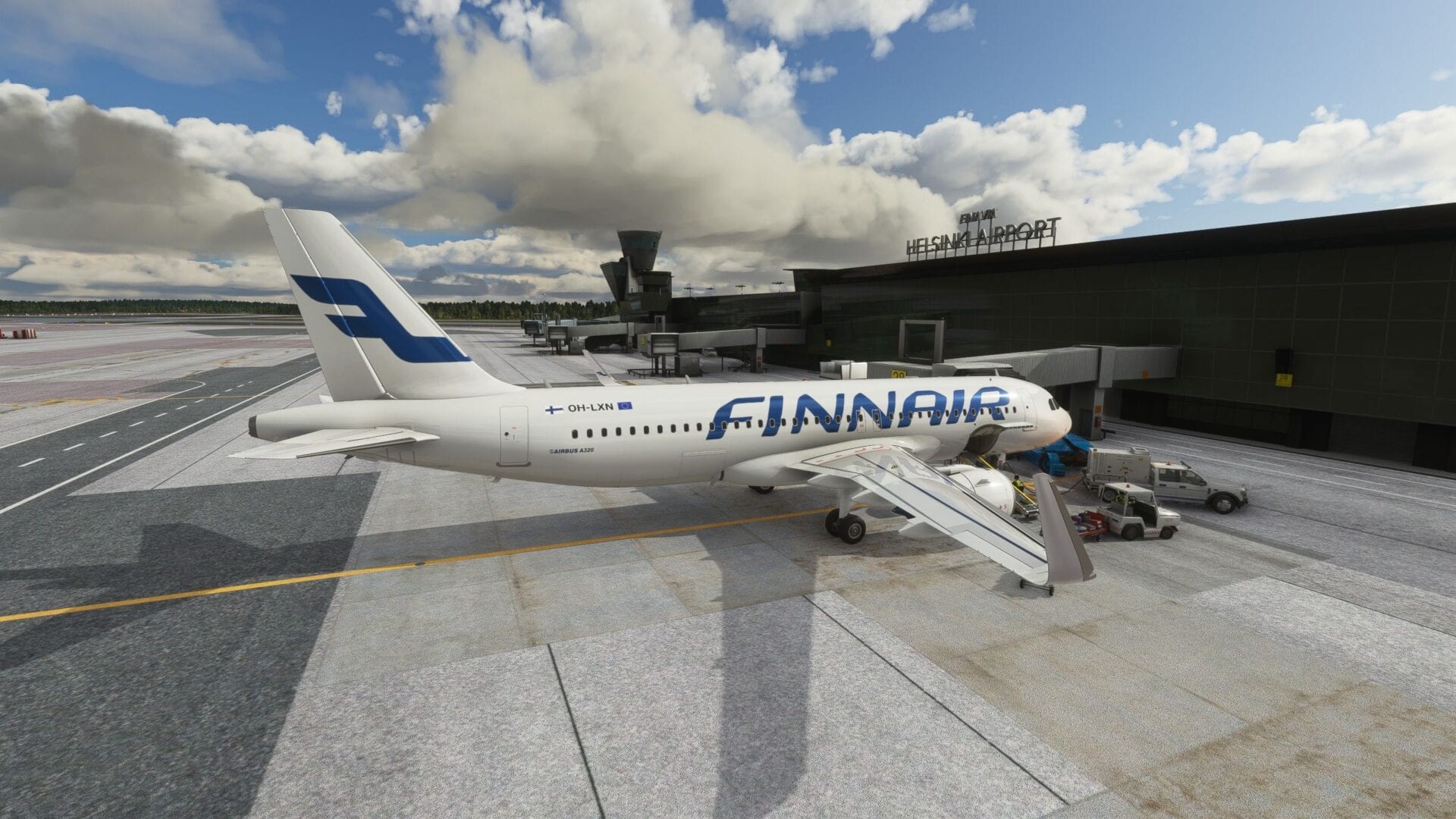 The add-on has just been released by JustSim and can be found for about $22 plus VAT on SimMarket.

It comes with its own installer so getting things ready is fairly straightforward, and you’ll be ready to visit Finland’s capital in no time at all.

Helsinki-Vantaa sees a lot of airline traffic and is the home of Finnair, so it’s a great base of operation in the Nordic countries if you fancy flying Boeings and Airbusses.

If you’d like to see what the airport looks like in detail, you can check out the in-depth flyover video below, showing Helsinki-Vantaa under every angle, lighting, and weather condition. The second video showcases an ILS approach to runway 15 with low visibility.

The airport has seen a lot of renovation work over the past few years, which is still ongoing. That being said, JustSim did a good job in framing a current snapshot, including the new expansion of Terminal 2. It’s quite apparent that they did their research and didn’t simply go on Google Maps (which isn’t unheard of, believe me).

The airport is built on a custom orthographic texture, but unfortunately, it’s a bit on the low-resolution side. It also isn’t color-matched with the surrounding scenery, meaning that you’ll see a stark contrast at the border.

The texture work on runways and taxiway is competent, with a very good representation of the real-life markings and materials (which vary considerably and realistically across the airport) as far as my research could go.

Some parts are blurrier than I would like (including the cracks on the main apron) and there are some compression artifacts, but the precision of the markings more than makes up for it.

The terminal buildings are rather nicely modeled, but the texture colors seem to be slightly off in some areas compared to recent footage. The windows also look a bit too green-ish.

That being said, the jet bridges are a highlight. They come in different configurations depending on their age, and they’re very, very nicely modeled.

The older models feature a rather iconic fixed setup and they do a valiant job of connecting to the aircraft despite the lack of articulation.

That being said, they require some finesse when you taxi to the gate, just like the real ones. Unfortunately, the stand guidance system isn’t functional, but this seems more the norm than an exception as Microsoft Flight Simulator’s SDK matures.

A rather visible issue is the apparently random switching between solid and see-through windows, which don’t fit vert well together. This isn’t an issue unique to this airport, but it’s worsened by the fact that areas with transparent windows are completely empty inside.

At this point, I would have preferred a fully-opaque setup, even more so due to the fact that the developers did a very good job of taking advantage of physically-based materials (PBR) on solid surfaces across all buildings.

Weathering is well-done overall, with good contrast between older and newer areas of the terminals.

While the airside areas are nicely detailed (albeit just a bit on the empty-side in terms of additional vehicles, clutter, and signage), the landside areas are partly-underdetailed, relying a bit too much on the blurry aerial images, meaning that you’ll see a lot of vehicles and items simply painted on the ground.

The very welcome exception to this is the abundant presence (and very well-done modeling and textures) of additional buildings like hotels, offices, parking silos, and road freight terminals, with the familiar DHL and DB Schenker ones nicely visible from the air.

It’s great to see that JustSim didn’t just portray the airport, but expanded a bit into the surrounding areas, creating a more lively environment.

There are no static aircraft, but as usual, it’s a matter of taste. Some people love them, while some hate them. Personally, I prefer their complete absence to not having the option to remove them. Yet, your mileage may vary on this.

The airport looks mostly great in the rain, but the see-through windows are once more a bit problematic due to how they stand out against misty or foggy weather.

Snow is also well-done in most areas with the exception of part of the Terminal 2 apron and some additional tidbits here and there. It isn’t perfect, but I’ve certainly seen worse.

Night Lighting is good, which is definitely relevant due to Helsinki’s location. In the winter, the airport sees just a few hours of daylight, so you’ll find yourself doing night, dusk, or dawn operations a lot. The PBR materials used in the airport buildings look especially impressive at sunrise and sunset.

The exception to this is, once again, the contrast between see-through windows and solid ones, which also appear a bit on the blurry side.

Landing aids (visual and instrumental) work well on all runways, and taxiways are correctly implemented following their cosmetic markings. While the airport has a fairly complex layout, you won’t get lost thanks to the good job done by the developers on matching markings with the charts, with good visibility and detail.

One thing that I really appreciate is the correct distribution of gates, cargo, and general aviation ramps, which so many developers simply get wrong for reasons that escape my comprehension.

I understand that many hardcore simmers prefer to disregard the default ATC in favor of online solutions like VATSIM or IVAO, but it’s nice to see a developer that won’t have Microsoft Flight Simulator’s AI ground controller send your Airbus A320 to the cargo apron instead of the gates.

All the ground services have been correctly implemented, so you’ll get everything you need, including the much-neglected fuel trucks.

Performance isn’t bad and in line with other airports of this size. On my personal PC (RTX 3070, Ryzen 9 3900x, 32 GB RAM), I lose 8-9 FPS at 1440p resolution and Ultra settings. While your mileage may vary, I’m absolutely satisfied by the balance between the massive amount of details added to the airport and the expense in terms of hardware resources.

Ultimately, Helsinki has a few aspects that could be improved, but it’s certainly a competent add-on that can enrich your flights to and from the Nordic countries.

If you care for flying in Finland in Microsoft Flight Simulator, or for adding the hub of another European capital to your collection, the large improvements over the default scenery certainly make Helsinki-Vantaa Airport an addon you likely will appreciate.