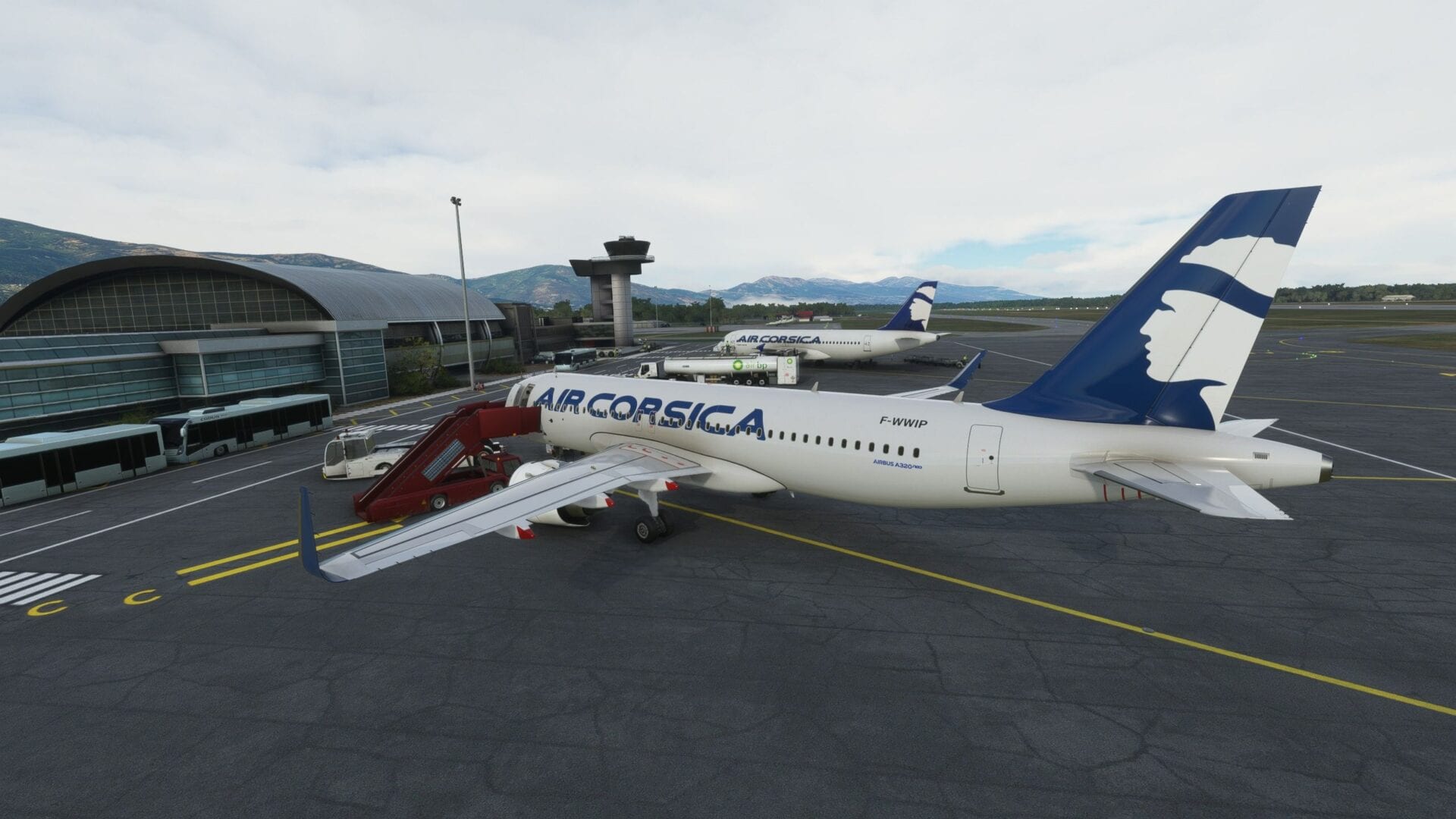 With many of us unable to travel, it’s nice to virtually visit holiday destinations, albeit virtually. Orbx’s newest airport add-on Bastia-Poretta (LFKB) for Microsoft Flight Simulator is perfect for this purpose.

The airport is located in Corsica, France, and it sees a lot of international seasonal traffic on top of regular flights from domestic destinations. Of course, it also involves plenty of general aviation activity.

It’s located in an absolutely gorgeous area on the north-eastern coast of Corsica with a lovely approach passing by stunning mountains facing the sea. This makes the airport attractive even before we take a look at the specific scenery.

The add-on is available on Orbx’s own store for about $19 and can be easily and quickly installed via the developer’s Orbx Central client.

If you’d like to check out the airport in detail, you can enjoy a video below, alongside a second at the bottom of the review showcasing night lighting, rain, and snow. A third video shows an approach to Runway 34’s ILS Z.

The perimeter of the airport is properly fenced and decorated with a custom orthographic base that is a tad on the blurry side but does its job adequately.

That being said, the developer actually modeled quite a few buildings in the immediate vicinity, including a charming horse farm with plenty of horses right by the threshold of runway 34. Looking closer to the fence, we even find a duo of plane spotters, providing a good idea of the level of detail we can expect.

The texture work on the runway and aprons is very good, to the point of reproducing the cracks on the tarmac of the main apron that actually do exist in reality.

The markings are very detailed and close to perfection, allowing incoming pilots to easily find their ramp. That being said, there are a couple of small blemishes, like the lack of some very visible red clearance area markings close to the tower.

Yet, we have to give credit to the developer for nicely reproducing the differences in the tarmac’s color likely due to paving work done at different times. Ultimately, it’s extremely challenging to find good up to date visual resources for this kind of smaller airport, and it appears that the red clearance markings mentioned above have been added fairly recently.

The work done on the terminals and on the tower is superb. While there is no interior modeling (which is always a point of contention in terms of value), the windows are very convincing thanks to the masterful use of PBR materials. Even the corrugated roofs feel extremely realistic, showing great weathering and slight differences in hue indicating the aging panels installed at different times.

I’m extremely pleased by the landside area, which did not receive any less love than the airside area. This is fairly rare in this kind of scenery in Microsoft Flight Simulator since many developers tend to neglect what you can’t see from the aprons.

There are plenty of vehicles and even people to populate the airport, which is another nice touch that not many devs implement. Bastia-Poretta certainly appears like a lively environment.

Among signage and smaller details, there is a lot to explore and discover. You’ll find recognizable facilities like the cargo and post depots, the chapel, the Gendarmerie, and more.

The overall attention to detail is extremely high, making the airport a charming place to visit and often sparking curiosity and further research.

For instance, the landside area includes a monument claiming that writer and pilot Antoine de Saint-Exupéry took off from the airport in 1944 for his last war reconnaissance mission on a a Lockheed P-38 Lightning, just before going missing.

This is actually slightly inaccurate, since Saint-Exupéry took off from the nearby Borgo airport, which doesn’t exist anymore. Don’t get me wrong: I mean that the claim is slightly inaccurate. The monument itself is real and accurately reproduced.

More lovely details include the helicopter apron with static helicopters including a Sécurité Civile Eurocopter EC 145, multiple marked flight school hangars on the general aviation apron, and the offices for Air Corsica and Air France.

There are also a couple of static airliners and a few general aviation aircraft which are pleasing to the eye. There’s even a Volotea Boeing 717, which isn’t something you see often in Europe nowadays. That being said, it is active and accurate.

As usual, the value of the inclusion of static aircraft in the scenery is very subjective, but it would be nice to have the option to remove them and free up the ramps.

The airport looks fantastic at night, with plenty of lighting that is both functional and pleasing to the eye. We even find the amber warning lights flashing at the entrance of the runway.

The airport also looks great in the rain and the snow coverage is almost perfect, even if snow must be fairly rare in Bastia.

Speaking about the functional aspects of the airport, there are a few snags. I had severe issues with the RNP approach to Runway 16 using the Fly By Wire A320 Neo (it pretty much steered me into a mountain), while the ILS approaches to runway 34 worked perfectly. This is most likely due to factors external to the scenery (and as such, it doesn’t influence my judgment of it), but consider it a NOTAM to avoid prematurely eating the dirt.

On the other hand, a couple of issues that can be associated with the setup of the scenery are the lack of fuel services (all other services work) and the inability for airliners to request parking to the gate to ATC. This is likely due to the fact that the gates where airliners normally park are marked as large general aviation ramps.

They’re not massive issues and they can be worked around, but they are slightly inconvenient for those who use the built-in ATC and the fuel trucks. For some reason, these oversight seem to be fairly common among Microsoft Flight Simulator scenery designers.

Speaking of performance, the developer did a fantastic job with optimization. Not only the whole package is smaller than 300 megabytes, but it also performs extremely well.

On my own PC (RTX 3070, Ryzen 9 3900x, 32 GB RAM) I lose roughly 3 FPS at 1440p resolution and Ultra settings. That’s definitely worth the massive improvement compared to the default scenario, as you can see above.

Ultimately, Bastia-Poretta is a charming airport and Orbx did a great job on its Microsoft Flight Simulator rendition.

Its scenic location and the quality of the models and textures, on top of the absolutely charming amount of small and interesting details, will likely make this one of my favorite sceneries when I’m missing the summer.