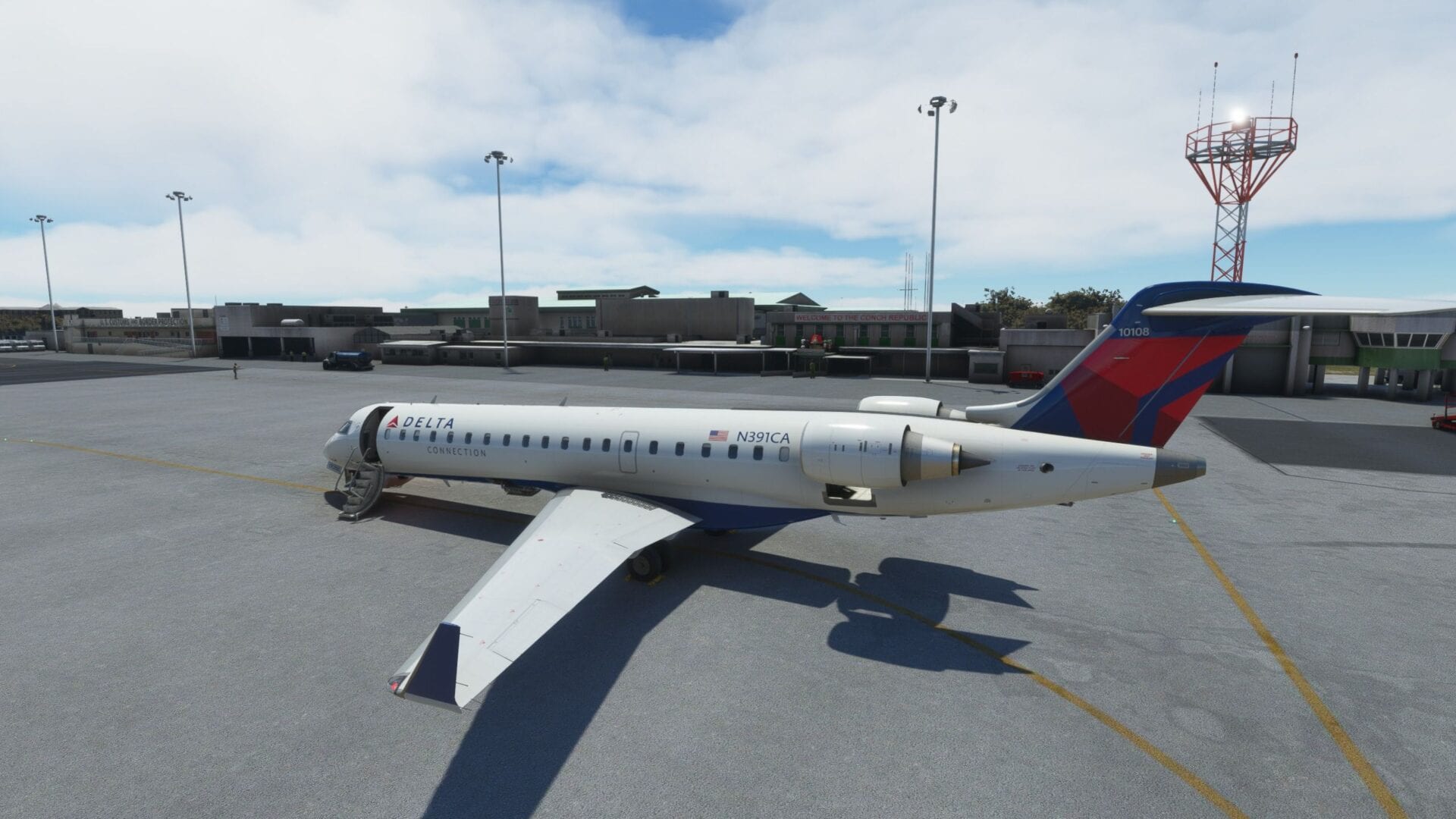 Key West scenery is always popular among flight simmers mostly due to its location at the extreme southern tip of the Florida Keys, closer to Cuba than to Miami. It’s surrounded by sea and a beautiful coral reef for very scenic approaches.

Unfortunately, the coral reef isn’t yet well represented in Microsoft Flight Simulator. Asobo has been working on the watermarks to expose this kind of feature across the world, and apparently, they have not yet gotten to the Florida Keys. When they do, the value of this scenery will likely increase as well.

On the plus side, the airport is also surrounded by photogrammetry, which means a lot of additional detail. The only procedurally-generated area in the vicinity is the Naval Air Station Boca Chica Field.

You can find the scenery on the Microsoft Flight Simulator section of Orbx Direct for a very affordable $7.79. This also means that you can use the publisher’s own Orbx Central Steam-like client to quickly and easily install the package and to keep it updated with no hassle.

If you’d like to see what the scenery looks like in detail, you can check out an approach to runway 9 above and another video showing off every nook and cranny of the airport in a variety of lighting and weather conditions below.

Functionally, the approaches work correctly and all taxiways are properly labeled, so you’ll receive the appropriate guidance to and from the runways by ATC. The PAPI lights are well-calibrated on both ends and will definitely be helpful during visual approaches.

Unfortunately, all parking areas are marked as general aviation ramps, including those that are usually dedicated to airliners, this means that only a couple (the large ones) will have all the ground services available and that AI-driven airliners won’t know where to go after landing and will simply disappear, while they won’t even spawn on departure.

Ideally, all airports that serve airliners should have the appropriate parking areas marked as gates, but many developers appear to overlook this. At the very least, fuel services work, which is good since it’s another commonly overlooked area.

Speaking of airliners, you may have to stretch your operations a little bit when flying to and from Key West. Microsoft Flight Simulator simply doesn’t have the appropriate models yet. Currently, the airport is the realm of Embraers, ATR-72s, and Airbus A319s, with the occasional 737. The closest you can get (excluding a really terrible 737 MAX that I wouldn’t fly if I was paid for it) is the CRJ 700, which used to operate at KEYW a few years ago, but doesn’t anymore. Of course, this is simply trivia that doesn’t have anything to do with the quality of the scenery.

The scenery is built on top of a nicely detailed orthophoto that conveys the marshy terrain well, but it’s a bit old. Key West used to have VASI lights to support visual approaches, before their replacement with the current PAPIs. Unfortunately, the aerial photo was likely taken while the VASIs were still in place and they’re still “painted” on the ground since they have not been deleted.

Mind you, the concrete pedestals they were built upon are still there even in the real world, but the big red squares painted on the ground can be a bit distracting.

Runway, taxiway, and apron textures are crisp, well-detailed, and mostly well-weathered but not everything in the surface colors patchworks created by the frequent repaving works is correct. For instance, the current real airport has a visible discrepancy at the runway holding points which isn’t reproduced here.

The markings blend well with the tarmac, without being too bright or cartoony, and most correctly reproduce their real counterparts. That being said, some are missing, including a second “Customs” lettering on the main apron and the green lines delimiting the pathways for passengers to board the aircraft.

Moving on to the 3D models, there’s a rather notable omission: there are no fences anywhere. All the fences that surround the border of the airport and the nearby parking areas have not been reproduced. The most glaring issue is the omission of the fence separating the airline apron from the general aviation apron since it impacts taxiing operations.

That aside, the terminal buildings are well made, textured, and weathered. The feel of the sun-bleached materials nicely conveys the tropical nature of the airport, as do the murals on the landside.

The hangars are equally well-weathered and they look pretty realistic, even if none is portrayed open.

While a lot of the smaller details are good or at least good enough, some tend to be a bit sub-par like the decoration on the arrivals terminal that celebrates the “southernmost point in continental USA.” Considering how iconic it is, a bit more detail and higher resolution textures would have certainly helped.

Ground clutter on the aprons is a bit lacking, making them feel slightly too clean and empty. On the other hand, the developers included a static version of the Cubana Antonov An-24RV that was hijacked in 2003 and has been stuck in Key West since. Its inclusion is great, considering that it’s located right under the approach to runway 9.

Vegetation is a bit hit and miss. There are a lot of palm trees around Key West airport in the real world, while here we see only default trees from Microsoft Flight Simulator, which don’t look anything like palms.

One of the positive aspects of this package is that the developers did a good job in including several landmarks across the island, even some distance away from the runway. These include several hotels, the Searstown Shopping Center, a couple of cruise ships, Fort Zachary Taylor, and more.

On the other hand, a few choices are a bit puzzling on this front: some hotels that have bespoke models stand side-by-side with identical ones left in photogrammetry, and the same goes with one of the cruise ships, making the discrepancy in details rather glaring. On top of that, the tall radio mast at the communication facility at Whitehead Spit had its structure entirely covered by a rather weird solid steel texture which makes it look like some sort of alien tower.

All textures react well to the rain, which is great since the weather can be a touch unpredictable here. That being said, roofs do not physically interact with the falling drops, which go straight through. That can be a bit jarring.

Night lighting is mostly good, except the westernmost hangars and a few of the additional buildings outside of the borders of the airport, which have been given textures that appear fully bright in the darkness and don’t look very realistic. The “Key West” sign on top of the terminal should light up, but it doesn’t.

Performance is exceptionally good. On my PC (RTX 3070, Ryzen 9 3900x, 32 GB RAM), I have pretty much the same frame rate at 1440p resolution and Ultra detail settings compared to the default scenery in Microsoft Flight Simulator.

You can see the difference in the comparison above.

While many of the flaws in this scenery are relatively minor on their own, they add up to form a rather significant group of problems that hold Key West short of being as great as it could be, especially considering that it isn’t a large airport, and more attention to detail would be warranted.

That being said, don’t get me wrong: this isn’t a bad-looking add-on. Modeling is competent and the texturing is mostly good, with great weathering. It improves the default scenery in Microsoft Flight Simulator considerably, and given the affordable pricing, it’s certainly worth considering.