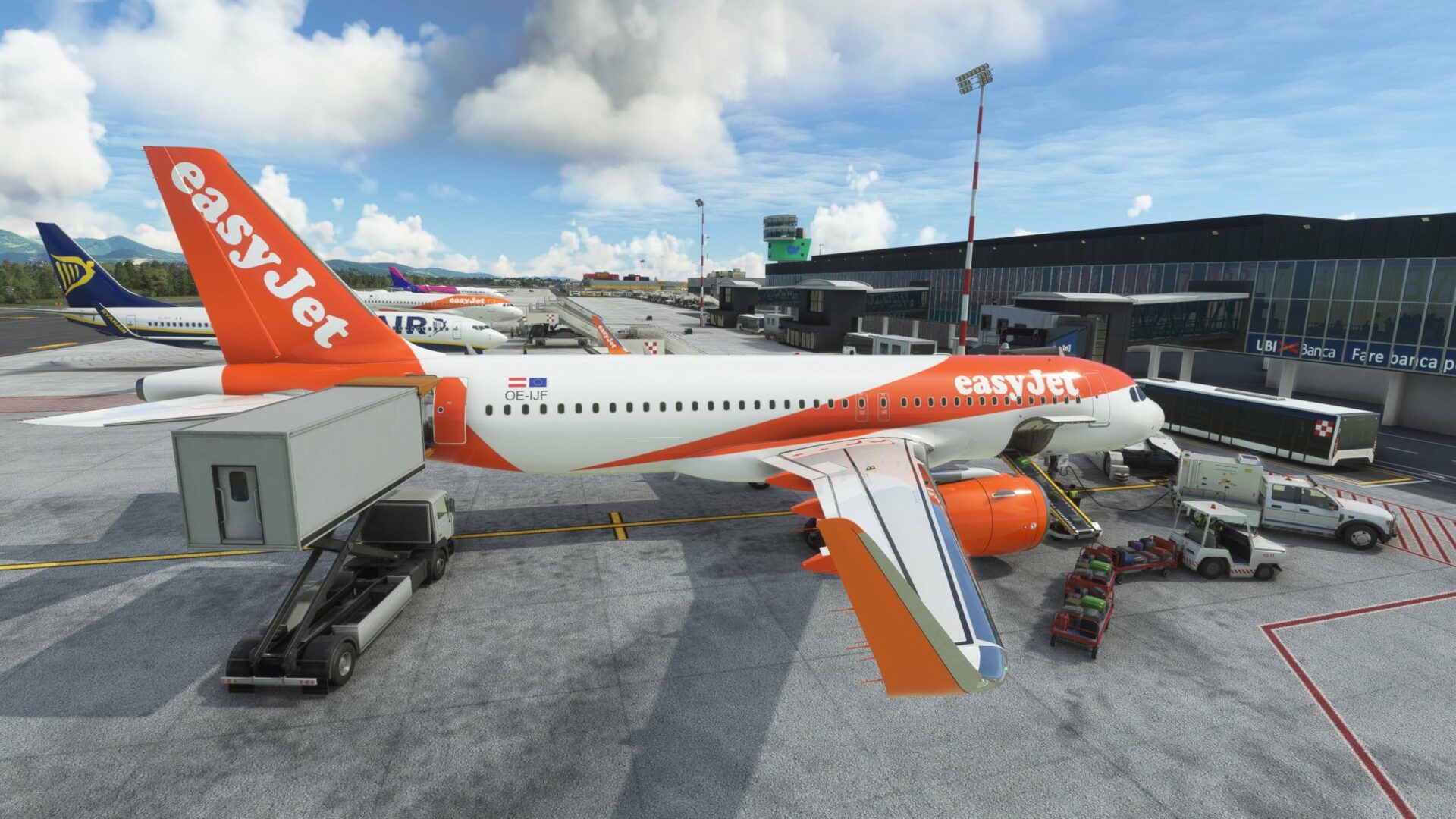 While not as famous as the neighboring Malpensa, Bergamo has become an important airport for Northern Italy and the area of Milan specifically, especially as a low-cost hub primarily used by Ryanair.

As such, it’s definitely a great addition for those who love flying in and to Italy. It’s also conveniently located near the Alps, which received a lovely facelift with World Update 6.

The add-on is available for PC on Aerosoft’s store for €16.76 plus applicable VAT. It comes with its own installer or you can use the publisher’s brand new Aerosoft One client to download, install, and update the airport with no hassles. It’ll also be released on the official marketplace and for Xbox Series X|S down the line.

If you’d like an extensive look at the scenery, you can watch an ILS approach and landing on runway 28 in the first video above, and a full flyover in a variety of lighting and weather conditions in the second video below.

Functionally, all the approaches, SIDs, and STARs are present and work as they should. The PAPI lights are also correctly calibrated for visual approaches.

That being said, the airport has a secondary runway (30/12) that in the real world is used exclusively by the nearby aeroclub. Unfortunately, the simulator’s default Microsoft Flight Simulator ATC prioritizes that one as the active over the primary runway (28/20).

While ignoring the objectively faulty default ATC is always a popular option, AI aircraft won’t, and since the two runways are (correctly) not connected by taxiways, you’ll see airliners try to land on a tiny 2,500 feet strip and then disappear. According to the developers, this is a shortcoming of the basic simulator that needs to be addressed by Asobo. Personally, I’d have spun the secondary runway off as a separate sub-airport, but I honestly don’t know whether that’d have caused additional issues.

Another small issue is that Orio al Serio receives sizable cargo traffic (including aircraft as massive as the Antonov An-124 Ruslan), but none of the parking ramps are marked for cargo. This is a rather common issue among developers, that tend to just mark freight-dedicated aprons as general aviation, but it’ll probably become more and more relevant, given that realistic AI traffic solutions are around the corner.

On the other hand, all ground services work correctly, including the fuel trucks that are often overlooked in this kind of scenery.

The ortho used as the base for the airport is of adequate resolution and comes with much better detail than the default aerials, while the textures created for runways, aprons, and taxiways are really great. Not only the materials are pretty much perfect, but the weathering and grime from extensive usage make them look very realistic.

The same can be said about the markings and signs, which are precisely reproduced according to the charts and the photographic and video sources I could find. You definitely won’t get lost, and they’re visually very fetching.

The whole airport is a very precise reproduction of the real one, despite the fact that it has undergone extensive renovation over the past two years (if you’re wondering, both Google Maps and Bing Maps are extremely outdated). I happen to live 15 miles away and I’ve been there plenty of times. Tailstrike’s work makes me feel right at home.

Speaking of homes, all of the buildings are great. The newly expanded terminal is beautifully modeled, textured, and detailed, with great interiors (that are faithful to the colorful designs you can find in the real airport) and exteriors.

The amount of detail poured into this is absolutely impressive. Even small things like the air conditioning units on the roof, which usually are little more than approximately textured grey boxes, received a lot of work and love.

The textures are decorated with just the perfect amount of weathering mixed with skilled use of physically-based rendering, resulting in some of the most realistic materials I’ve seen in Microsoft Flight Simulator.

The interiors are decorated with plenty of animated passengers. While many of them look exactly the same, their primary use is creating the illusion of a crowd from outside, and they’re very successful in that.

The other buildings show the same great attention to detail, from the tower to the hangars and cargo warehouses, all the way to the aeroclub and the landside area with the massive and iconic Orio Center mall. Everything is topped by high-resolution signage that really sells the scene.

A lot of work also went into the appropriate clutter and cars, from rather realistic reproductions of Italian police and emergency vehicles to all of the service ones that you do find on the real Aprons of Orio al Serio.

The only small nitpick is that I would have added a bespoke 3D model for the gas station on the other side of the road from the aeroclub. It’s very visible from the runway, and it’s just painted on the ground, which is slightly disturbing.

The airport looks great in the rain, while snow coverage is a bit hit and miss, which isn’t uncommon given the limitation of Microsoft Flight Simulator’s software development kit.

Night lighting is very good pretty much across the board, besides certain parts of the terminals in which the discrepancy between tinted and non-tinted glass is a bit too much.

Speaking of performance, Tailstrike did a fantastic optimization work, with the airport only losing 5-6 FPS when compared to the (frankly horrendous) default Microsoft Flight Simulator scenery on my PC (RTX 3070, Ryzen 9 3900x, 32 GB RAM) at 1440p resolution and ultra detail settings. You can see the difference above.

Ultimately, Bergamo Orio al Serio International Airport by Tailstrike Designs is one of the most detailed scenery add-ons available for the simulator. It’s absolutely obvious that a lot of love and effort went into its creation.

If you enjoy flying in Italy, even more so if you focus on low-cost carriers, this is an absolutely easy recommendation. 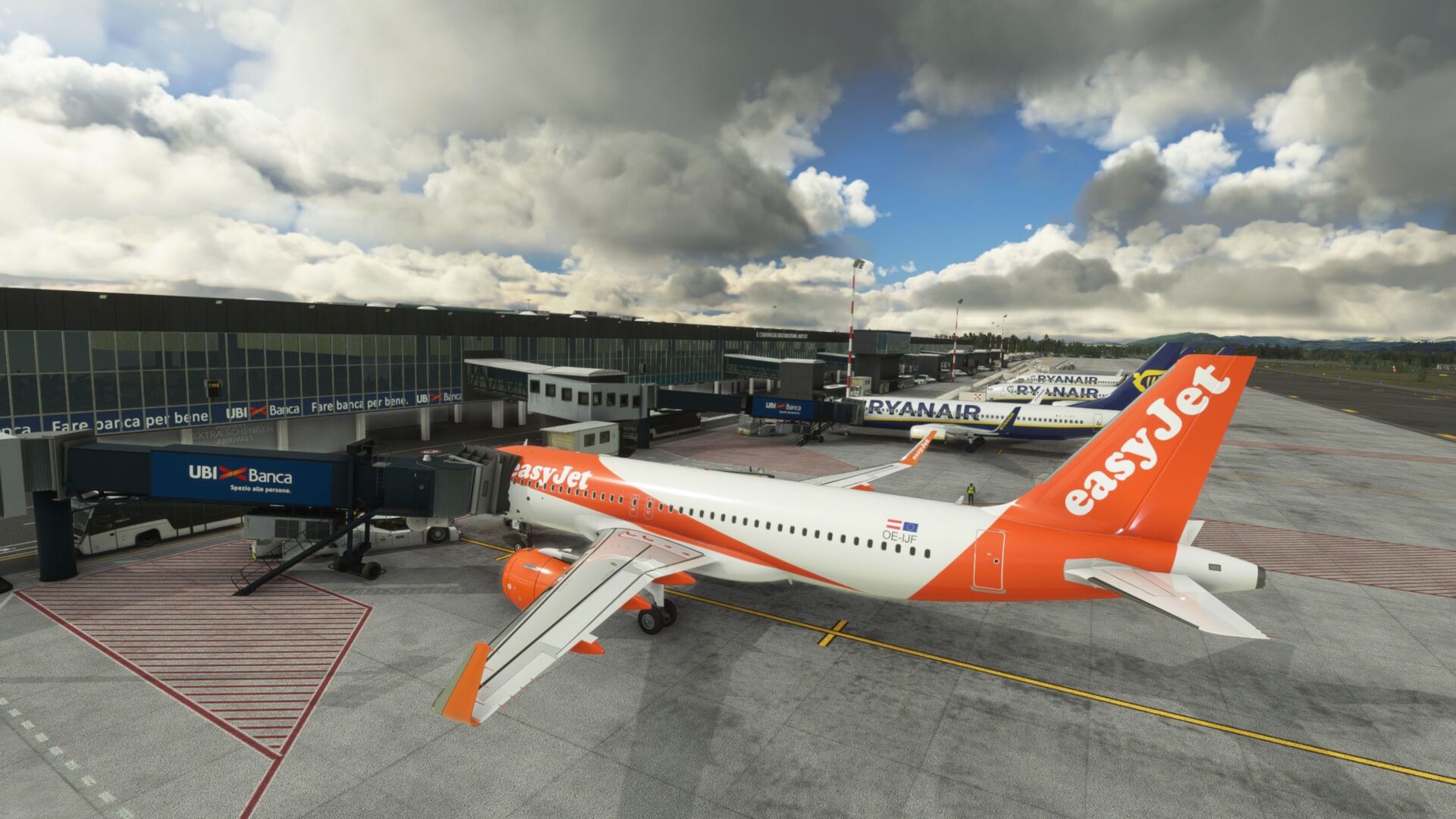