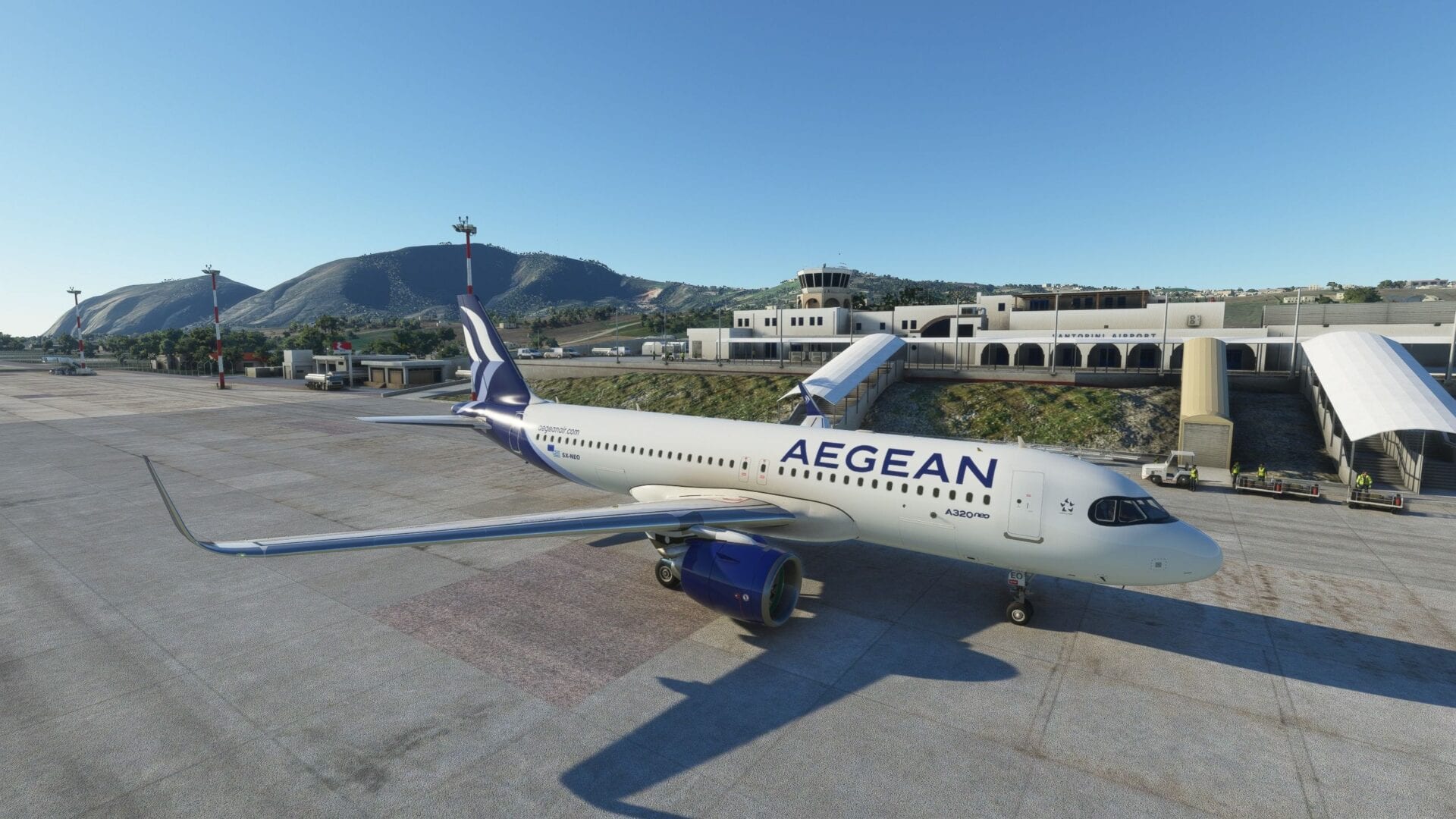 The airport is available on SimMarket for about $21 plus applicable taxes. It comes with its own installer, so you don’t need to do much fiddling in order to get things up and running.

Santorini airport is host to regular flights to and from Athens, but it lights up in the summer when a metric ton of airlines activate their links with pretty much every major hub in Europe.

Since the airport mixes both civilian and military use, it’s certainly interesting from the operational point of view, which adds to the beautiful location further embellished by spectacular sunrises over the sea.

The military base, though, also adds to the challenge of recreating the airport, increasing the difficulty of finding reliable source material. Google maps has the whole structure blurred, while Bing Maps is outdated by about a year.

This also means that it’s difficult to review it. Just as the developers had to work harder to find source material, it hasn’t been easy to verify the add-on’s fidelity.

Unfortunately, that’s the main flaw here: the new terminal is depicted under construction, while in the real world it’s already open and operational.

Other elements like acoustic barriers on the main civilian apron are missing, and the same can be said about some of the markings on the apron itself and on the taxiway. Others don’t precisely reproduce what can be seen in real-world imagery.

As I mentioned above, I can certainly relate to the difficulty of finding updated imagery, but this doesn’t mean it’s impossible. Instagram, for instance, is a great source of recent pictures and videos. People simply love to post there when they take a flight.

If you’d like to see what the airport looks like in detail in Microsoft Flight Simulator, you can check out the in-depth flyover video below, showing Santorini from every angle, at night, and in the rain. The video above showcases an RNAV approach to runway 15.

The airport perimeter is properly fenced, and JustSim did a good job of implementing a couple of relevant landmarks beside the airport itself. The Ekklisia Agios Ioannis is a church very visible from the field standing on a nearby rocky hill.

The Ekklisia Agia Paraskevi is another church pretty much embedded into the perimeter of the airport but accessible from the outside. Both are built in the iconic Cycladic architecture and add flavor to the add-on.

The military aprons are aptly decorated by bunkers and other structures. This is another element of flavor that makes the airport stand out, but the camouflaged roofs are a bit too saturated and could use better blending with the surrounding grass.

A reasonably good job has been done on the different materials forming the runway, taxiways, and aprons, but the asphalt texture is a bit on the flat side. On the other hand, the concrete slabs forming part of the aprons look great and realistic, with plenty of weathering.

The old terminal is the best part of the scenario. Inspired by Cycladic architecture, it certainly stands out as a rather unique structure.

The landside area is a thing of beauty, with its complex and charming curbside canopy and the unique cafe and relaxation area with its dalmatian-like decor and great use of physically-based rendering.

The parking area is also well-detailed and there are plenty of people around, making things look lively and realistic, even if their 3D models are a bit hit and miss.

More well-crafted spots include the fuel depot, the tower, and the terrace area where passengers can wait for their flights while enjoying the sight of the aircraft taxiing, taking off, and landing.

The approaches work correctly and the taxiways are appropriately implemented to match the charts, even if it’s unlikely that you’d get lost in an airport with such a simple layout. Both sets of PAPI lights are working and correctly calibrated for visual approaches.

Update: the original review stated that ground services were completely missing. Reinstalling Microsoft Flight Simulator with a clean Community folder solved part of the issue. Ground power and fuel are available, while the rest is still missing. At the moment, we don’t know precisely what caused the conflict, but if you don’t see any ground services, you may be affected by the same issue. The airport has them correctly implemented.

More clutter on the aprons and surrounding area would have been welcome, and the aerial photography near the beginning of runway 15 shows two general aviation aircraft. Those should have likely been covered with static 3D planes, as they look awkward just painted on the grass.

Night lighting is adequate, including a dynamic beacon at the top of the tower. The apron is well-lit by nicely-modeled floodlights that also include the red warning lights at the top.

The airport’s textures react well to rain and snow cover is actually one of the best I’ve seen in a third-party airport so far. I did not include it in the video because I believed Santorini didn’t get any snow, but apparently, I was wrong. It does happen, very, very rarely.

While the airport does suffer from the flaws I mentioned above, it’s impossible not to notice that it’s still a very large improvement over the extremely simplistic rendition provided by default in Microsoft Flight Simulator.

Hopefully, JustSim will update Santorini in the future to include the correct markings and the new terminal. Considering the beauty of the location and the quality of the old terminal, there is certainly potential here that could be fully realized with some additional work.