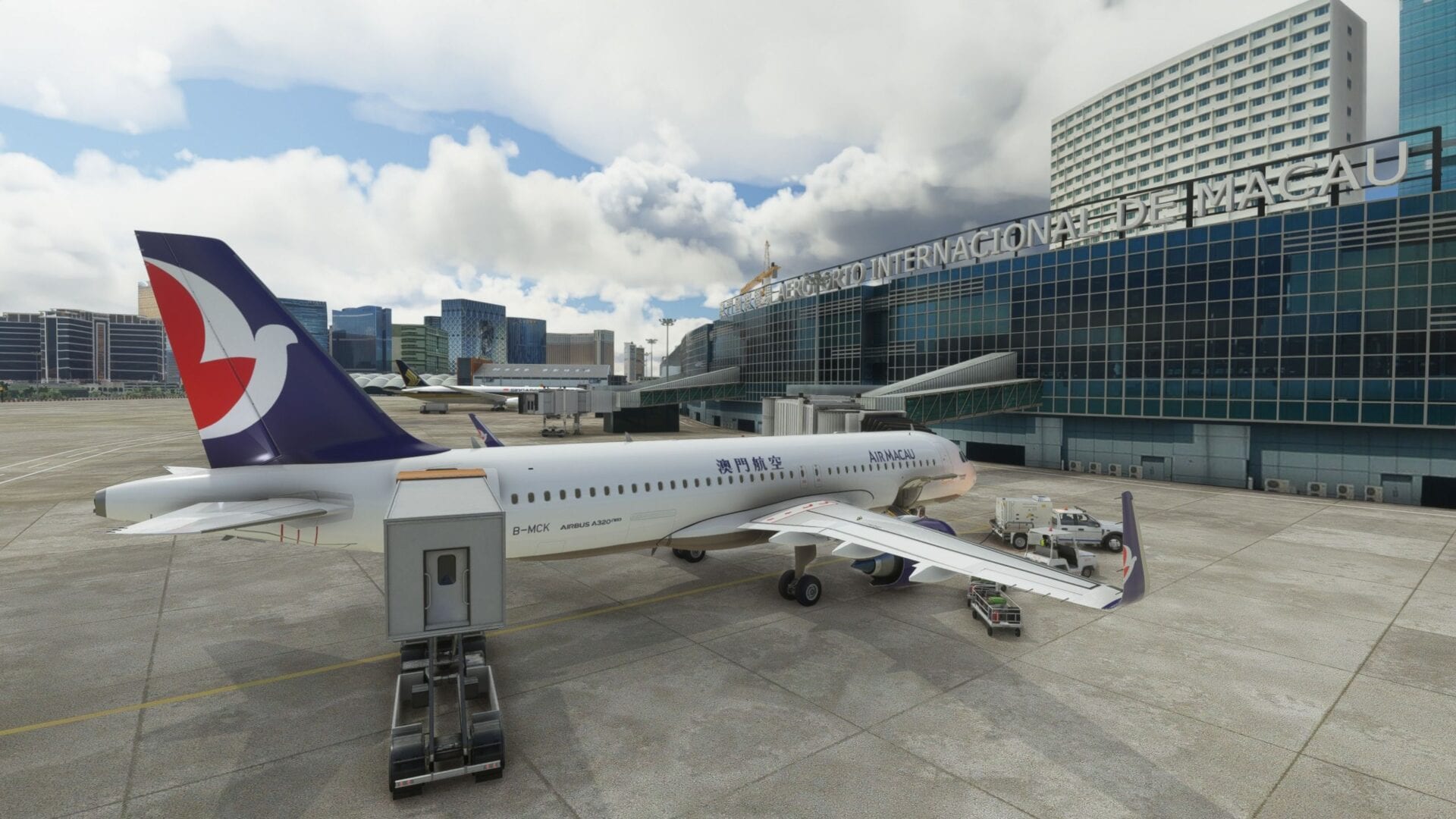 Third-party developer SamScene3D recently released its “Macau Macao VMMC” add-on for Microsoft Flight Simulator, including both city scenery for the former Portuguese colony on the Chinese coast and its international airport.

Macau has always been a relevant destination due to its very nature, connecting the western world with China. In more recent years, it has also been a gate between Taiwan and the rest of the continent.

This means that the city itself has a very unique charm, while the airport is a great base for both domestic and international flights.

The add-on can be found on SamScene3D’s own store for $16.95 including applicable VAT. It comes in a simple zip file with no serial or installer. Enabling it is as simple as dropping the content of the archive in your Community folder.

If you’d like to see what the scenery looks like in detail in Microsoft Flight Simulator, you can check the tree videos included in this review. The first shows the iconic (and rather unconventional) LOC DME approach to runway 16.

The second is a full flyover video showing every angle, weather, and lighting condition. The third video is a more conventional ILS approach to runway 34.

You’ll notice that there are more videos than in my usual reviews, and this is because they make it very easy to understand the value of this package including both city scenery and its airport.

Unlike most international airports in Microsoft Flight Simulator, VMMC is very close to the city, so you’ll be able to enjoy the scenery even if you fly airliners that usually cruise at nearly 40,000 feet. It’ll be all around you as you take-off and land.

On top of that, Macau airport is extremely scenic in its own right due to its runway and taxiways on the water.

It also features a very interesting mix of approaches including ILS, RNAV, circling, and even a few very interesting offset localizer-based ones that require rather precise timing to execute a visual turn on final approach.

This is all done with the city’s unique skyline fully in sight.

The airport doesn’t have the same level of detail as what you would expect from a fully dedicated package, though. It uses default jetways, and the detailing can be a bit sparse.

That being said, it’s certainly workable with mostly-correct markings for runways and taxiways, and surfaces that are reproduced fairly well, even if some more weathering would have been welcome.

Specifically, I would have loved to see some 3D detailing on the stone breakwater surrounding the runway, taxiways, and tower. That’s always breathtaking to see when correctly implemented.

The airport’s also fully-functional, with correctly implemented ground services, approaches, and gates. The only small issue is the way the gates are labeled will cause ATC to tell you to taxi to the “general aviation parking.” It’s a nitpick, but it probably can be easily corrected.

The PAPI lights were incorrectly-calibrated at release, but SamScene3D immediately provided a patch to solve the issue which is handy, as you’ll need them for quite a few of the more complex approaches.

Interestingly, the developer also included the brand-new terminal extension, so the airport is up to date in its layout.

The airport is well-lit at night, including floodlights, runway lights, and taxiway lights. Interestingly, Taxiway Hotel is portrayed with red edge lights.

While taxiway edge lights are usually blue, I could confirm that the red lights on Hotel are accurate to the real world. Occasionally, Taxiway C1 also has red lights, but not always. I imagine this changes depending on conditions in the real world. Unfortunately, this goes beyond my expertise and my research was pretty much fruitless besides confirming that said red lights do exist.

Moving on to the city, coverage is rather extensive, including the iconic Cotai strip with its Las Vegas-like hotel and casinos.

The area around the Grand Lisboa, which displays some default landmarks included in the base Microsoft Flight Simulator, has also been enriched considerably with several new buildings and landmarks.

The area of Zhuhai surrounding Macau has also received some love, so you won’t suddenly go from bespoke coverage to autogen buildings-only. Incidentally, this will be further improved in a future update.

The super-long Hong Kong-Zhuhai-Macau bridge has been improved considerably compared to its default representation, and it comes with its massive bus terminal on the Zhuhai side.

The quality of the models isn’t as consistent as I’d like, with some that are pretty good and some that could use more detailed models and textures. Understandably, the developers aimed to keep performance high, but it has to be said that if you aren’t literally flying into the buildings, it’ll be challenging to spot most of the flaws.

Night Lighting is mostly good, creating some very scenic views when you’re landing or taking off after hours.

There is a cluster of skyscrapers on Hengqin island that in the real world display some rather striking light shows at night, and their representation in this scenery is a bit drab. Those could use some tweaking and improving while some apartment buildings seem to lack illumination.

The package works well with rain, and snow coverage is pretty good as well (besides the runway that is completely coated), but it really doesn’t snow in Macau to begin with.

Performance is great. On my PC (RTX 3070, Ryzen 9 3900x, 32 GB RAM), I lose only about 5-6 frames-per-second at 1440p resolution and Ultra detail settings compared to the default scenery in Microsoft Flight Simulator. Considering how many models are included in SamScene3D’s package, this is great.

Incidentally, the whole area is extremely interesting to fly over due to how densely packed the urban areas are. With Hong-Kong just on the other side of the Pearl River delta on top of Shenzen, Dongguan, Guangzhou, and Foshan, Macau is basically surrounded by a massive metropolitan area with several major airports.

SamScene3D’s own Hong Kong package is the perfect match for this, and hopefully the other cities and airports (including Hong Kong’s own Chek Lap Kok) will soon receive some love from scenery developers.

Ultimately, this add-on isn’t perfect. The airport could use additional detailing and the quality of individual models isn’t always great. That being said, SamScene3D is known for extensively updating its scenery over time, which is promising (especially since Macau is a massive construction area bound to change rather quickly).

That being said, it’s still very easy to recommend the Macau Macao VMMC scenery if you’re interested in the area. It covers a very unique part of Asia that deserves a visit (or many) and the reasonably-priced combination of both city and airport is great, especially considering how interesting, challenging, and enjoyable landing at Macau International Airport can be.