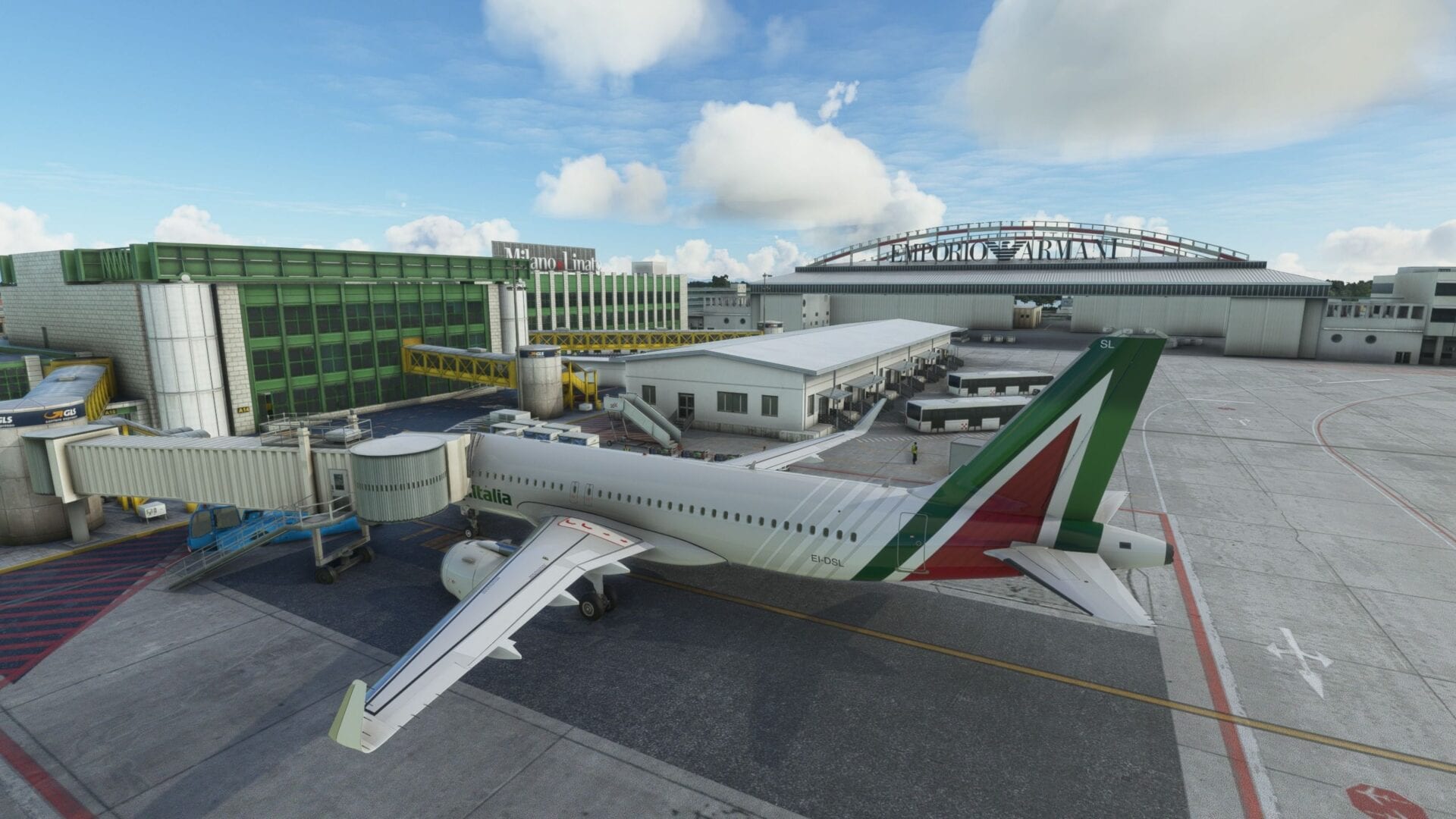 While not as famous as its big brother Malpensa, Linate handles many domestic flights and the occasional international flight, on top of being a relevant general aviation and business jet base.

A large advantage over Malpensa is the scenery: Linate is located at the outskirts of Milan (which has full photogrammetry in the sim, with the airport being right at the edge of it.

On top of that, there’s the popular Idroscalo artificial lake, which in combination with the urban environment makes for very scenic approaches.

Incidentally, I know Linate very well. It’s the closest major airport to my home, and my father used to be based there when he was a charter Learjet pilot.

If you’d like to see what the airport looks like in detail in Microsoft Flight Simulator, you can check out the in-depth flyover video above, showing every angle, weather, and lighting condition. On the other hand, the second video showcases an ILS Z approach to runway 36 followed by a VORDME approach in the third video

The scenery is available on Simmarket for about $23 including applicable VAT, and it installs painlessly thanks to the Contrail client.

The ground textures of this add-on are absolutely top-notch, reproducing the runways, aprons, and taxiways very precisely. We get both the correct markings down to very small details and the diverse patchwork of materials due to a long history of renovations and repaving.

I can’t overstate how great the texture work looks, with just the perfect amount of weathering and staining. It could be defined as nearly photorealistic.

The taxiways are also correctly marked, ensuring that you’ll get true-to chart guidance to the runway by ATC while taking off.

Unfortunately, there has to be some misconfiguration somewhere, because the ATC won’t offer the option to taxi to the gates and parking upon landing, forcing you to find your own way there. This also confuses AI aircraft, which will be stuck just after vacating the runways, potentially creating awkward situations when you’re landing just behind them.

The Safegate visual docking guidance system is also missing, but to be fair, it’s an advanced feature that’s still unavailable in 99% of airports for Microsoft Flight Simulator.

Speaking of the runways, the glideslope of both the ILS options (Z and Y) of runway 36 appears to be excessively high (unlike the default scenery). You’ll find yourself 170 feet higher than expected at the 4 miles mark with four whites on the PAPI lights, forcing you to disconnect the autopilot early and correct rather radically to get yourself back into the correct attitude, as you can see above.

Update: JetStream Designs told Twinfinite that an update solving both the ILS issue and the lack of ATC parking guidance is coming tomorrow (February 16). We were provided a test patch, and we can confirm that the change fixes both problems.

Below you can see a VORDME approach on the same runway done with the correct glide angle. Luckily, the PAPI lights are well calibrated, and they’re very helpful. The RNAV approach on runway 18 is also correctly simulated.

The terminal is beautifully modeled and textured, sporting its iconic yellow and green colors and a nicely reproduced interior. The landside area is also more detailed than what you see in many airports nowadays. Everything is up to date, which is laudable considering the recent renovation works.

Within the airport, hangars and equipment look great, including the well-known Emporio Armani hangar. There are many details to enjoy, and it’s really difficult to find something to complain about.

JetStream Designs also included quite a few buildings outside the airport proper, filling the small gap with the photogrammetry and adding elements like the nearby Canzo cemetery and the cargo hub.

The level of detail here is a bit lower compared to the rest of the scenery, but not too bad. On the other hand, I really wish that the developers thought of adding more details to the Idroscalo and railway hub just north of the airport. They fill your visual while approaching Runway 18 and the boats, piers, buildings, and railroad cars painted on the ground can be a little jarring.

Not only the static aircraft are great, with a good level of detail and a nice and realistic variety of airlines, but they are optional. I can’t stress enough how great this is, especially since so many developers didn’t include the possibility to remove them. I really hope that more Microsoft Flight Simulator developers will follow JetStream’s lead on this.

All the ground services are correctly implemented, including the often-forgotten fuel trucks and the stairs on the many ramps that don’t have a jetway. Incidentally, said jetways look great but they appear to be a bit rigid in their animation, so their connection to the aircraft can be imperfect.

Night lighting is very good and scenic. Runways and taxiways are correctly lit, while the floodlights give the aprons just the right look after dark. They also have the appropriate red anti-collision lights at the top.

Considering the urban location, it’s a real pleasure to approach this airport at night from either direction.

The textures hold in the rain as well as they do in dry conditions, which is to say fantastically. Snow coverage is a bit spotty but not too bad. This still seems to be a common issue in many third-party airports, indicating a persisting problem at the software development kit level.

Performance is great. On my PC (RTX 3070, Ryzen 9 3900x, 32 GB RAM) I actually gain a couple of frames-per-second at 1440p resolution and Ultra detail settings compared to the default scenery.

The few functional issues are likely to be easily solved with an update, and the scenery itself is a visual gem that is easy to recommend if you love to fly in Italy. 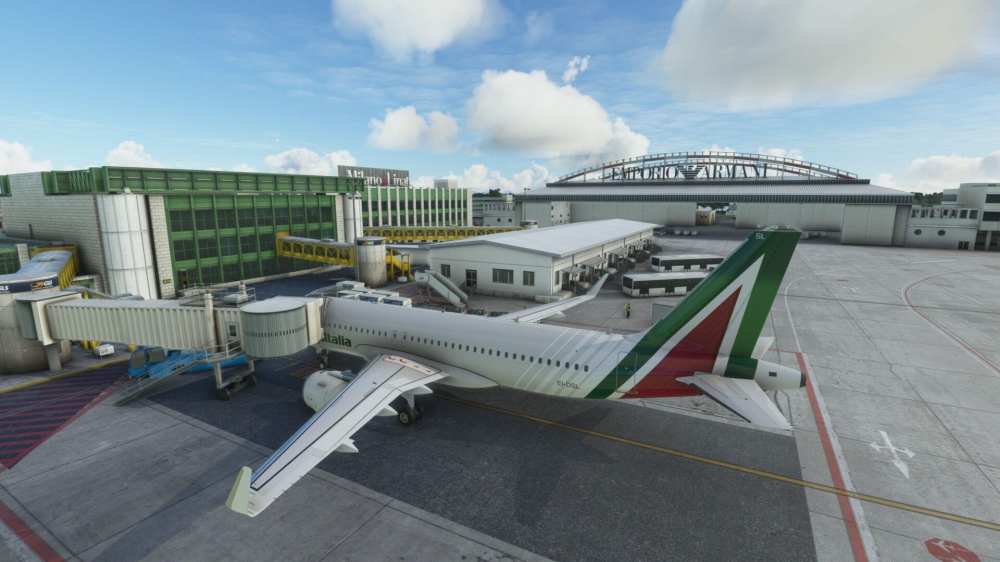