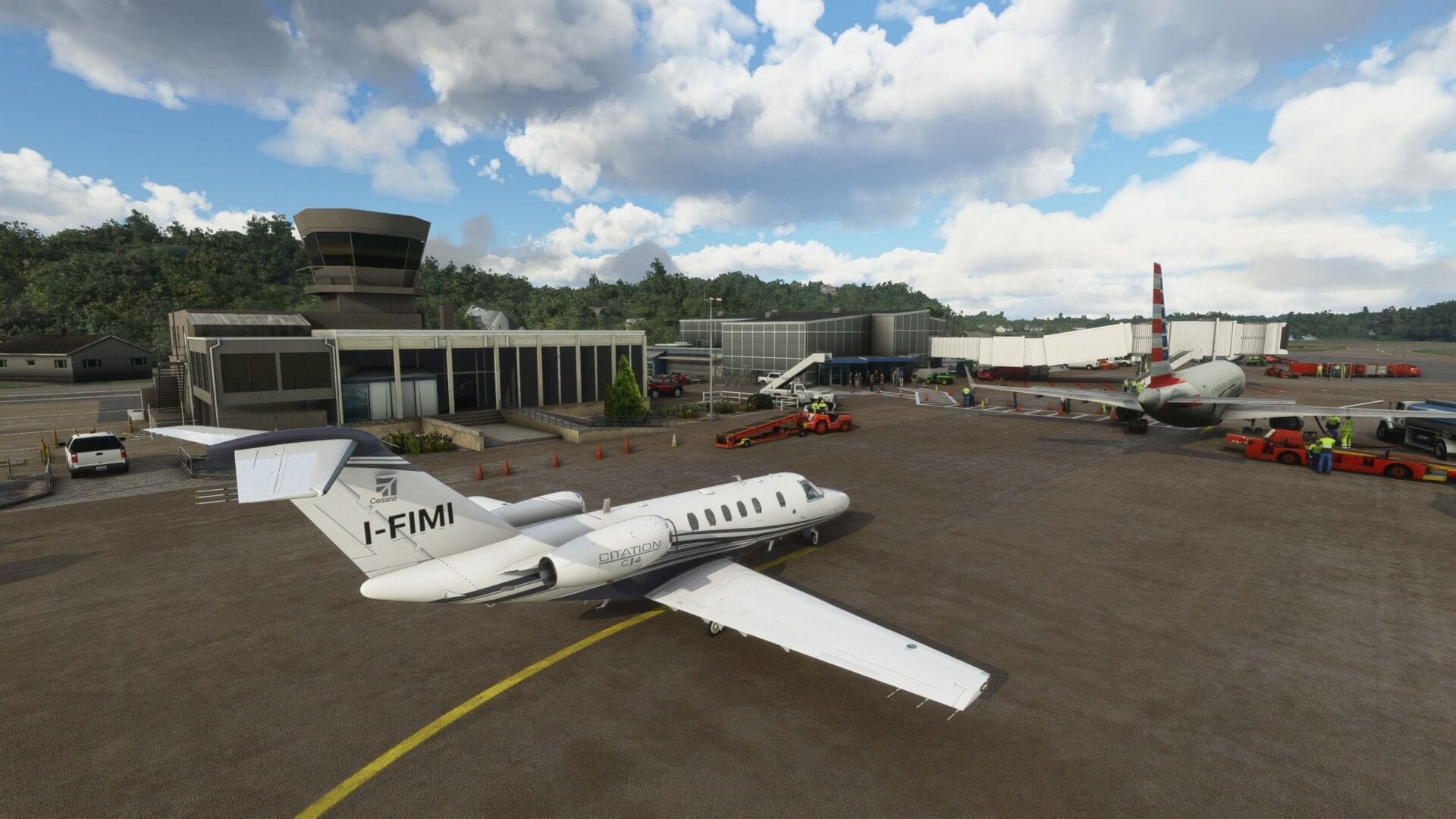 KHVN is an interesting choice for an add-on, as it’s far from a major hub. Yet, it does have scheduled airline services by American Eagle.

As a matter of fact, American Airlines canceled it at the end of last year and resumed it just a few days ago.

The airport is certainly more suitable for general aviation use because the simulator doesn’t yet have airliners of the type and size that regularly operate from New Haven.

As far as I know, the airport doesn’t usually see anything bigger than an Embraer E-175 (which is what flies there nowadays to and from Philadelphia) and has seen operations with CRJ and Dash-8 aircraft.

A much-controversial runway expansion is planned to receive bigger birds, but for now, it’s a bit tight for Airbus-sized airliners. That being said, I did find evidence that an A320 came to KHVN in 2014 carrying the president of Ecuador, so it’s possible.

Like all airports from Orbx, it can be installed with the handy Orbx Central client, which means no hassle, no registration codes, and a speedy process to flying after purchasing it from the developer’s own shop for approximately $14.

If you’d like to see what the airport looks like in detail in Microsoft Flight Simulator, you can check out the in-depth flyover video below, showing the airfield from every angle, every weather condition, and at night.

One of the advantages of flying from Tweed New Haven is that it’s immersed in a large region enhanced by photogrammetry in the simulation, which makes for extremely scenic vistas when you fly low and slow or on approach and take-off.

While this usually has the downside of rather bad-looking buildings in the immediate vicinity of the airport, it’s laudable that the developer actually integrated the photogrammetry with bespoke 3D models (even if a couple were strangely missed), enhancing the view from the cockpit when parking at the terminal.

Speaking of the airport’s surrounding, the marshy terrain is nicely showcased by the ground texturing, giving the area a distinctive look.

Runways and aprons are reasonably well-textured especially in the materials department, but my research indicates that the runways should be a lot more weathered, while some of the markings are either missing or incorrect on all paved surfaces. The VOR antenna also appears to be painted with the wrong color (it should be white).

On the other hand, Runway 32/14 has been correctly closed, which is a marked operational improvement over the default scenery, which portrays it (incorrectly) as open and usable.

All the approaches and the two available STARs work as they should, granting safe instrumental landings. The video below showcases an ILS approach to runway 2.

The terminal, towers, and hangars are nicely modeled and textured, with realistic-looking weathering and pleasant details. A working jetway that I imagine gets handy when it’s cold or rainy is also included. That being said, quite often passengers simply walk on the apron to reach their aircraft, and the developer did a great job depicting a group of fliers boarding a static American Eagle Embraer.

The clutter and decorations populating the main apron are great, with an abundance of vehicles, equipment, and personnel that make the scene feel quite alive.

The only issue is the static American Eagle Dash-8 turboprop since those have been retired since 2018. All static aircraft are a bit too blurry and pixelated from my taste. I understand wanting to optimize performance, but you get to see those from quite close-up.

Interestingly, the general aviation apron displays a Chinese-built military trainer Nanchang CJ-6 with a rather distinctive livery. The presence of the model isn’t a breach of realism, considering that the CJ-6 is often purchased by western private pilots due to being dirt cheap (for aircraft standards). The only slightly weird detail is that the aircraft with that specific livery actually exists… in Australia.

The designer of the airport definitely appears to love Easter Eggs. If you look inside the control tower, you’ll notice that the controllers may be playing Minecraft and Microsoft Flight Simulator 2002 instead of paying attention.

Update: the original review stated that ground services were missing. Reinstalling Microsoft Flight Simulator with a clean Community folder solved the issue. At the moment, we don’t know precisely what caused the conflict, but if you don’t see any ground services, you may be affected by the same issue. The airport has them correctly implemented.

Unfortunately, the other tower and the terminal don’t have a modeled interior. With smaller airports like this one, it’d be nice to see more transparent windows. I’m also not a massive fan of some of the shrubbery put together with textured 2D polygons. This isn’t 2002 (despite the screen in the control tower).

There are plenty of details to be found even on the general aviation apron, where you can find hangars, offices, and the fire station.

Tweed New Haven airport looks great in the rain, and snow coverage is one of the most believable I’ve seen in a while, with the top of structures and static decorations nicely blanketed, while aprons and runways are almost completely clean, as if they had been freshly plowed. That being said, perhaps I’d have allowed snow accumulate on the closed runway, because I doubt that one gets cleaned when it snows.

Night lighting is adequate, but in some areas, it exposes artifacts on the textures of the building that aren’t too pleasant to the eye.

Performance is spotless, with my PC (RTX 3070, Ryzen 9 3900x, 32 GB RAM) not losing a single frame at 1440p resolution and Ultra detail settings compared to the default scenery.

Ultimately, Orbx’s add-on is unsurprisingly a big improvement compared to what Microsoft Flight Simulator offers out of the box, but it isn’t perfect.

It provides a rather good and reasonably-priced base in an area that has great overall scenery and few detailed airports, but it would require an update to improve the reproduction of the runway and taxiway markings and weathering to achieve true greatness.