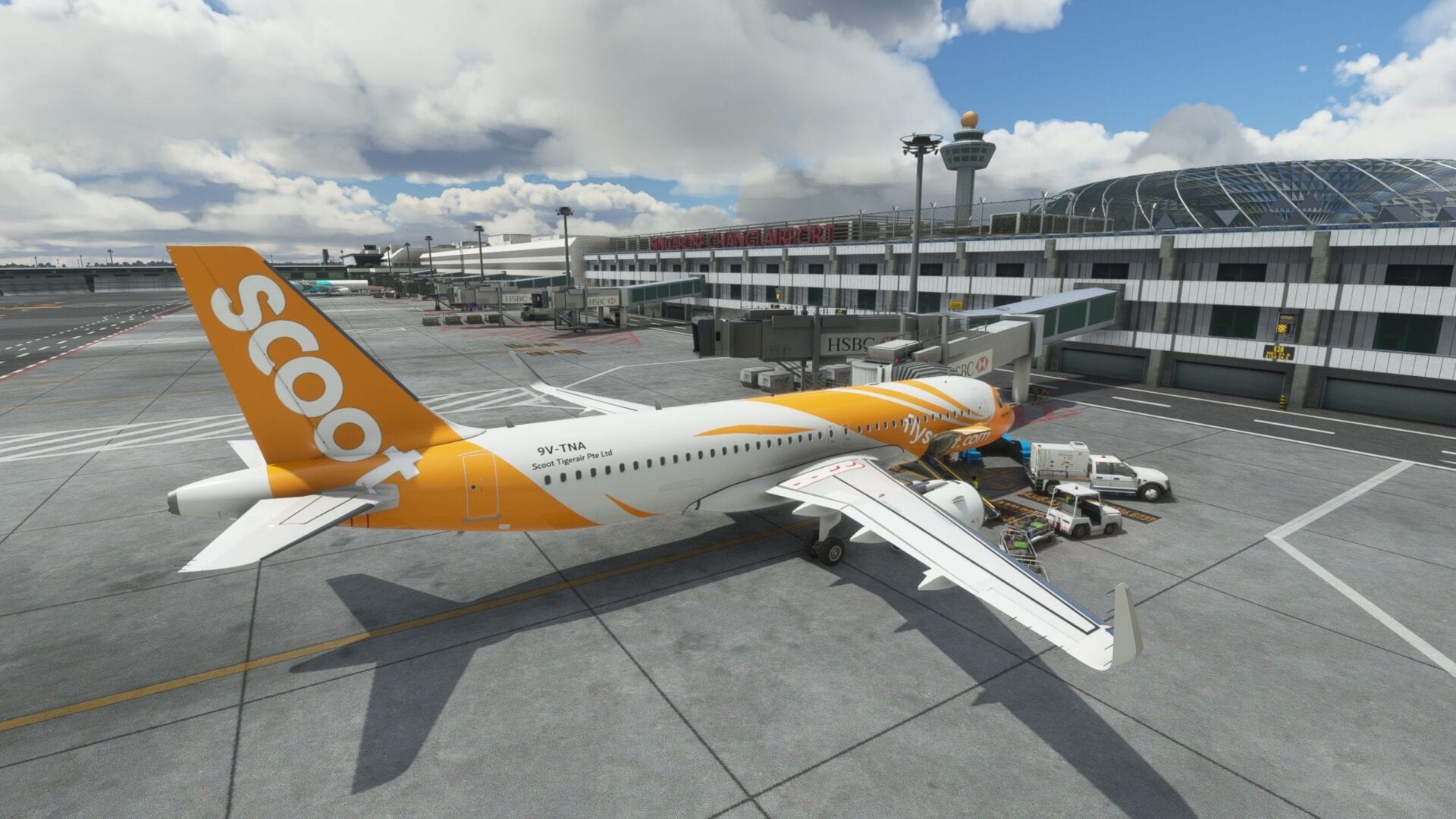 Despite the fact that the add-on is already available for purchase (for a rather affordable $14.70) on Orbx’s store, the developer is considering this a sort of “open beta” release, with the full launch coming in 1-2 weeks.

For that reason, this is going to be an unscored preview, with a full scored review coming when the airport is officially considered released.

Like all airport available on Orbx’s store, WSSS can be installed painlessly via the Orbx Central clent, and you’re ready to go almost immediately.

If you’d like to see what the airport looks like in detail in Microsoft Flight Simulator, you can check out the in-depth flyover video below, showing the airport from every angle, every weather condition (even if you’re unlikely to see snow in Singapore), and at night.

On the other hand, the second video below showcases an ILS approach to runway 02C.

Do keep in mind that the videos and images in this article also include the Singapore Downtown add-on, which perfectly complements the airport by enriching the nearby city, and is also made and sold separately by Cloudsurf Asia Simulations.

As one of the busiest and biggest airports in South-East Asia, Changi is a very relevant addition to Microsoft Flight Simulator, which is definitely lacking in the advanced scenery department in that area of the world.

It sees massive airliner traffic and it’s a major cargo hub, so this is definitely a great option if you enjoy that kind of operation.

The current form of the airport comes with one relevant shortcoming: the brand new Runway 20L/02R isn’t portrayed as open. While it has been opened in the real world a few weeks ago.

The default simulator erroneously identifies the runway as the Changi military airbase, which it actually used to be before it was converted to the civilian strip it is today.

This add-on doesn’t touch that (as a matter of fact, it doesn’t change this part of the airport at all). Yet, there is good news, as the folks at Cloudsurf Asia Simulations promised to fix it by adding the new runway to the airport by the end of the beta. This will likely involve removing all the default textures and markings and replacing them with the correct ones matching the rest of the scenery, on top of linking the taxiway to the main airport.

The addition of the new runway is going to be very interesting from an operational point of view because it’s on the other side of the massive construction site for Terminal 5, which has been frozen and won’t be completed for a few years. This means a long taxi from the gates to the runway in a very busy airport.

It’s certainly nice to see that the developers are on top of the situation with the new runway since there are teams that take months to correct this kind of issue or don’t do it at all.

The reproduction of the taxiway and runway markings is very precise, and they’re fully functional as well, with correct labels that will be called accurately by ground ATC when guiding you to your runway or gate. This kind of accuracy isn’t all that common in large airports and it’s certainly laudable.

While the materials are also well-done, a bit of additional weathering on the asphalt and concrete would be welcome. On top of that, Taxiway markings are slightly see-through, which means that that you’ll notice where they cross. This is a very minor issue, but it’d be nice if the developers managed to find a solution.

The four terminals are masterfully modeled and they’re among the best I’ve seen in a long while, with both the airside and landside areas beautifully rendered and finished with great textures and generous use of physically-based rendering.

While not all interiors are modeled, the iconic “Jewel” in the middle of the airport is beautifully rendered and comes with its own interior. The terminal shuttle that crosses it is also fully animated.

The same great attention to detail has been granted to the tower and the Impressive Crown Plaza hotel complex, and it extends all the way to the cargo terminal and maintenance aprons, creating a nearly spotless rendition of the airport buildings.

The jetways are also animated and feature great modeling, a visible interior, and basically perfect textures.

It’s an absolute joy to see an airport as big and complex as Singapore Changi modeled with such quality and attention to detail all the way through.

Most developers for Microsoft Flight Simulator tend to reduce the workload by cutting on the more remote buildings or especially on the landside areas, but the fact that this is the home airport of part of the development team is very visible. Not only visual research has been done properly, but the love for Changi shines through in the care and attention to detail poured into its reproduction, basically without missing any major spots.

As a matter of fact, there are so many little details, that exploring the airport and finding things you usually wouldn’t expect modeled is a lot of fun.

This is even more impressive considering that the four terminals are all different, and each comes with its own specific style and flavor.

The only small issue I have with the landside area is the palm trees that are created simply by intersecting 2D polygons. Their color doesn’t match the rest of the scenery and they glitch through mist and rain. Hopefully, the developers will be able to use better 3D palm trees for the final version.

There are a couple of additional glitches like the 3D models covering the road tunnels passing under taxiway November at times spawning in the air, while better color matching with the surrounding grass would also be in order.

I have noticed that AI aircraft don’t take-off from Runway 02L, remaining stuck on the threshold until they disappear. I’m not sure what causes the issue, but it’s something I hope is addressed moving forward, as well as adding more variety among static aircraft.

Yet, considering that the airport is in beta, I certainly have reason to hope that all these small issues (which pale when compared to the overall quality of the scenery) will be solved soon.

The airport looks great regardless of weather conditions (with the exception of the palm trees mentioned above whenever there is any mist or fog), and it’s fantastic at night, with excellent illumination across all the aprons and terminals, culminating with the beautiful colors of the lit Jewel.

I’m happy to report that all the ground services work correctly, including fuel trucks, which so many airport developers tend to neglect. All the approaches and landing aids (both instrumental and visual) are fully functional as well.

Performance is generally very good for an airport of this size and complexity, losing only 5 FPS at 1440p resolution and Ultra detail settings on my PC (RTX 3070, Ryzen 9 3900x, 32 GB RAM). Yet, there are occasional moments in which the frame rate dips for no apparent reason, only to return to normal shortly after. I haven’t yet identified the cause.

Ultimately, Singapore Changi is already one of the best airports available in Microsoft Flight Simulator.

Despite its size and complexity, it’s a testament to the love poured by the developers into creating a familiar location.

The addition of the new runway and hopefully the ironing out of the few kinks by the full release after this brief beta period certainly have the potential to crown WSSS as a true masterpiece of this craft.