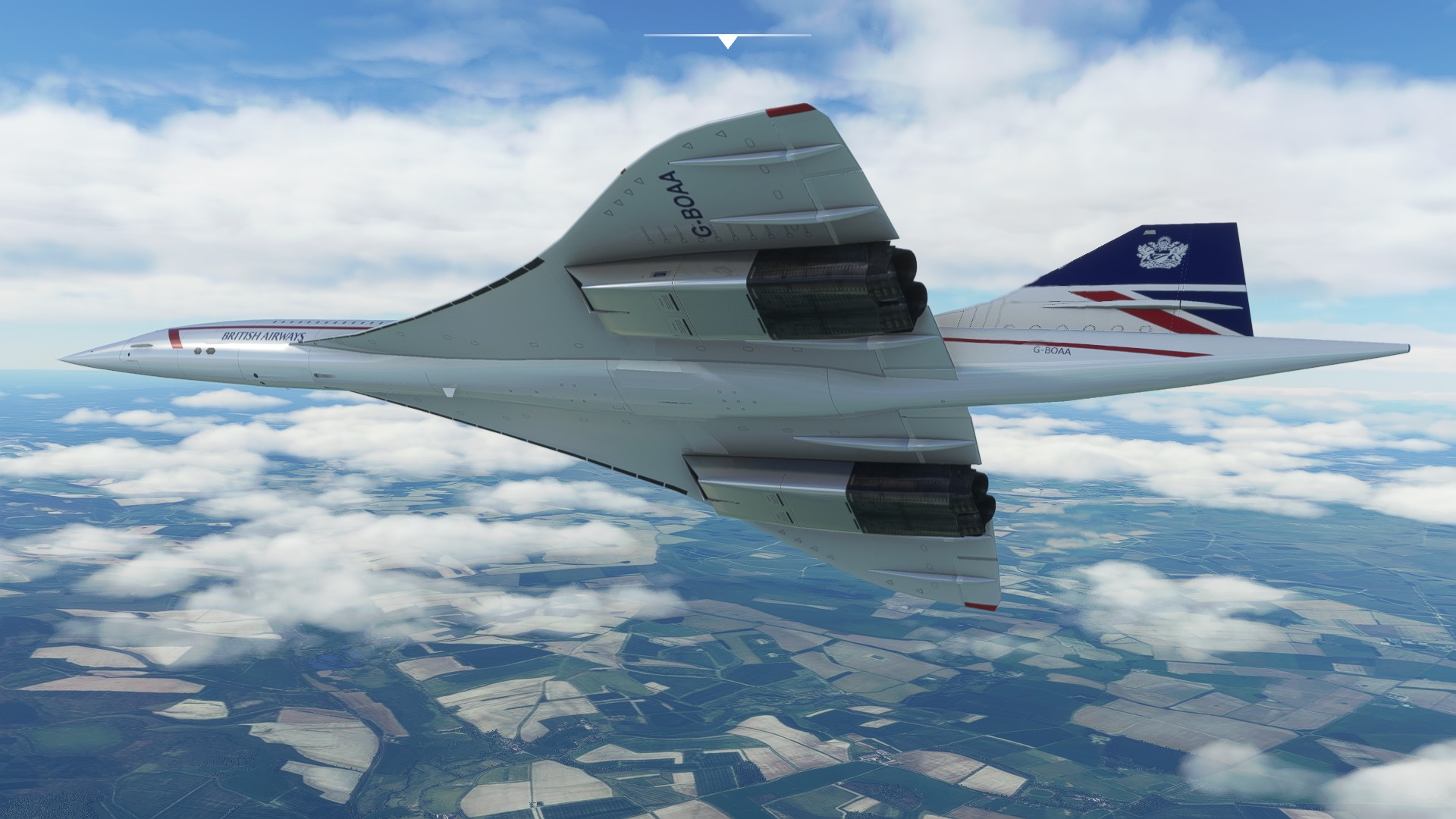 First of all, we get an update from DC Designs, which showcased its upcoming Concorde and the freeware P-61B Black Widow, including screenshots portraying both.

“Big decisions have been made during this week’s work on Concorde, mainly concerning the flight deck.

In the FSX and Prepar3D version, I made a lot of modeling sacrifices in order to maintain performance on older PCs that might not otherwise have been able to handle an aircraft with such a complex flight deck as Concorde’s. With MSFS, and especially with the recent performance updates, this is no longer an issue and as a result the vast majority of the entire cockpit is now being re-modelled as well as re-textured, to take advantage of the capabilities of the new simulator.

This means that considerable work will be carried out throughout in terms of detail – instruments that were simplified before can be presented in their full detail; screws, switches, cabling and other details that were omitted can be built in, and of course the whole cockpit can now benefit from the use of full PBR materials which makes all the difference when it comes to realistic finishes.

Although I’d already decided to build more detail into the cockpit, the extra work I intend to carry out will push the release date back slightly as it’s a lot more work to take on, but this is Concorde and I know folks will want it to be as complete as possible. The engineer’s station will feature a lot more detail than before in terms of functional systems and visual detail ( as if it wasn’t complex enough already ) and of course the cabin area will also be upgraded with higher detail modelling and texturing.

A few images attached – the one that will probably cause the most excitement is the cockpit. This is VERY early Work in Progress, but it shows the flight deck in place and ready for the upgrade modelling to begin over the course of the coming month or more. I will post more detail shots as things develop, so this image should be considered very much the starting point.

Around the external model, detail is gradually being added to the engine areas ( which have been entirely re-textured to 4K ) as well as more research being done to add relevant details such as stencils, ground re-fuelling system, loading areas and so on.

Finally, the P-61B has also had its textures re-mapped to 4K along with normal maps, and had a brief outing testing some of the new work. Work continues there in my ‘spare’ time with steady progress being made.”

Next is SC Designs, which showcased new screenshots and a development update for its F-16 Fighting Falcon.

“This week there was a tremendously cool result when, thanks to a kind offer from MSFS “modder” Karl Derner, wing-tip contrail effects were fitted to the F-16 Fighting Falcon. I had already planned to do this but Karl was well ahead of me and had fitted the effects to his copy of the DC Designs F-15 Eagles. A chat and a few shared files later and you can see the results in the attached screenshots. I have also added tire-smoke effects, and I am hoping to finish off with proper G-Vapor – the code works with a test effect, so now it’s just a case of creating something that looks right. I have some ideas about this and will share any successful tests in later updates.

Further detail has been added to the cockpit, along with sterling work from CodenameJack447 on the various displays and further HUD refinements. The F-16 will also benefit from some extras that are featured on the real aircraft such as maneuvering flaps and slats similar to those in the DC Designs F-14 Tomcats.

There have been many requests for a Thunderbirds livery with the launch package. As well as the F-16C and F-16D, I am now going to include the Thunderbirds F-16C with its own livery and exhaust smoke-trail effect, which will be activated by a switch on the joystick in the cockpit. A similar effect will also appear on the other versions, but instead be attached to the wing-tips, to mimic the “Smoke-winder” system common to many F-16s for air display purposes. A neat solution I think, that will appeal to all users. ( The smoke switch will be slaved to something otherwise un-used, such as the water rudder or similar, so that it can in turn be slaved to a user’s joystick command, essential to any aerobatic teams that might want to form up their own “Thunderbirds” with the F-16C and will have their hands full with close-formation flying ).

I now have the high-resolution decals to add to the exterior model for warning markings and stencils ( I’m staying with texture map panels lines and rivets just for now ), before finishing off the cockpit and its coding and animations. That will leave just some tidying up on minor details before I can start working on the liveries that will accompany the package. Although there’s still a lot to do, there are no more unknowns in the way now, so it’s full-steam ahead for a late November – early December launch. So far, everything’s working out really well.

Finally, with the Marketplace now having extremely long waiting times for new products, and with so many folks asking for weapons, the F-16s will definitely launch with Just Flight and will be fully weaponized, as soon as they are ready, and then head to the Marketplace and third-party stores later on. Images shared today feature the F-16 back with its full arsenal of weapons.”

Moving on to SimWorks Studios, we get another teaser trailer for the Daher Kodiak, which is slated for a release in November.

Next is 29Palms Scenery Design, which revealed the first look at Nuremberg Airport (EDDN) in Germany, developed in collaboration with LimeSim.

It can be purchased on Orbx Direct for $11.09, including the following: