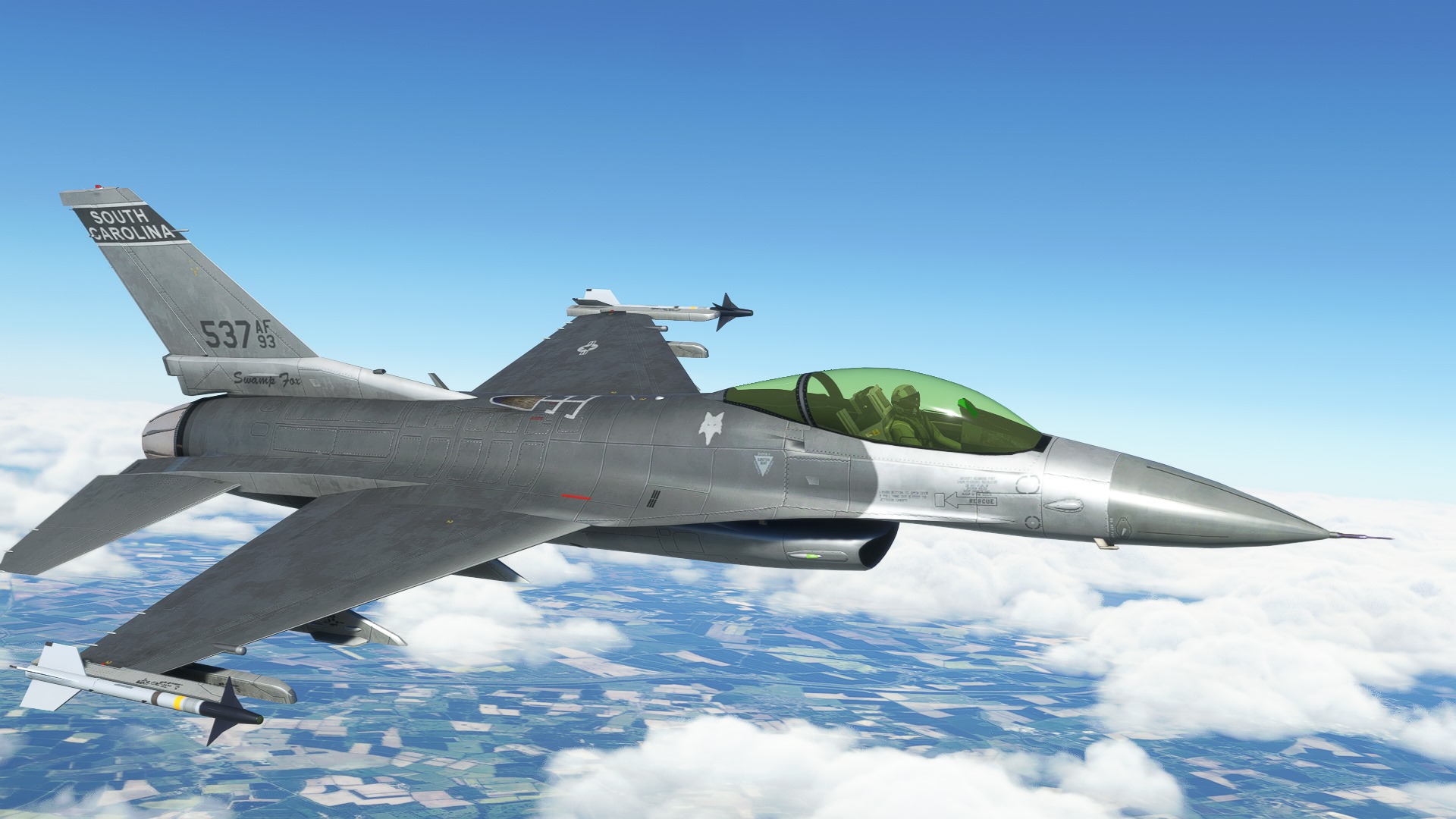 First of all, Military Visualizations (Milviz) just released the first look at its upcoming SR-71 Blackbird. It’s a single image, but considering how unique the aircraft is, it’s certainly great to see.

I certainly can’t wait to fly at over Mach 3 with this record-holding beauty. The screenshot was shared on the developer’s Discord Server.

Next is a gallery of SC Designs’ F-16C Fighting Falcon, alongside a development update.

“I’ve been working this week on the F-16’s undercarriage, which has quite a complex general assembly and retraction cycle. It’s important to get this area right early on, as an identical assembly is shared on the F-16D variant, so getting one right means getting them both right. It also allows for the flight model contact points and compression cycles to be adjusted and locked in, getting the aircraft ready for flight testing.

Further work in animations has been done with flaps, spoilers, and other exterior surfaces now animated and operating as required. The leading-edge slats will be done next week. The F-16’s maneuvering slats work in much the same way as those on the F-14 Tomcat, so that’s one area of the aircraft that can easily be integrated into the flight dynamics. Special effects have also been added in such as contrails and tyre smoke on touchdown.

One area I’m not so sure about is decals. All warning texts and other finer details will be done with high-resolution decals for close-up viewing, but I’m not sold on the idea of decals for panel lines. The DC Designs F-15 Eagles have texture-mapped panel lines and look fantastic. The DC Designs F-14 Tomcats have the modelled-in panel lines and look equally awesome, but I don’t know whether the huge amount of additional work is really worth it unless you’re absolutely right on top of the aircraft. I think that adding the rivets might be worthwhile, while keeping the lines as they are. What do you think? Is it worth it to model in thousands of panel lines and rivets that cannot be seen in detail when you’re more than 10 feet from the airframe?

Next week I will be finishing off the exterior to the extent that flight testing can be properly conducted, and then moving on to adding full detail to the cockpit including all instruments and controls. Things are shaping up nicely and we’re on time so far!

As a side note, DC Designs has recently announced that due to piracy of their products, they will only be selling future products via the Microsoft Flight Simulator Marketplace. As a newcomer to this field, they know more than I do about why this is a good idea, and as such I will follow suit. We’ve worked incredibly hard to achieve what we have so far, and don’t want to see our work being ripped off either. Hope you can understand the reasoning behind that decision.”

We stay in the military realm with IndiaFoxtEcho, which provided new screenshots and a development update for its F-35 Lightning II.

“We have (almost) completed the main structure of the cockpit and we are moving to the canopy and the ejection seat. As we did for the external models, we have remade everything we considered unsatisfactory in the P3D…and in the case of the cockpit, it meant the whole thing. It took a while but we think it was worth it – here are some screenshots (canopy and seat missing, some parts not completely textured).

One thing we do not like is that, at the moment, we still have an XML-drive HMD. It would be much better to do it in HTML and we are experimenting with that… but the results are not completely satisfactory in terms of functionality and there are some serious bugs. We planned to “steal” something from the Top Gun Super Hornet… but we are not sure on the release date (maybe it will get delayed since the movie has been recently postponed to 2022?)Also, we have created a number of liveries for the A and B models – the intent is to have at least one real-world livery for each nation/service (real-world only – no fictional or “future” liveries). Note that at the moment all of our liveries have the “older” finish (that is with lighter gray on the panels’ edges) – while newer planes have a more uniform and smooth look (which we’ll try to include but no promises here).

The F-35C model is still unfinished (landing gear, weapon bays, and other details need to be textured), but here is a WIP screenshot.

We do not have a release window yet: as per our usual policy “it is done when it is done”. We HOPE we’ll have a test version in a month or so… but we do not want to cut any corner.”

The aircraft will be freeware, and you can follow its development at the dedicated Discord Server.

Moving on to airports, Flightbeam studios revealed the first look at its Auckland Airport (NZAA) in New Zealand. It’s being developed in parallel with Wellington (NZWN).

Its release is defined as “not far away.”

Next, we get an announcement from FeelThere, which is working on St. Thomas Cyril E. King International Airport (TIST), serving the island of St. Thomas in the United States Virgin Islands.

A single image was revealed, which you can see below.

Last, but not least, Fred’s Airports released Saarbrücken Airport EDDR, This is actually freeware, but you can choose to pay a small fee to support the developer and get a faster download.

You can find it here, and you can see the quality (which looks very high for a freeware airport) below.