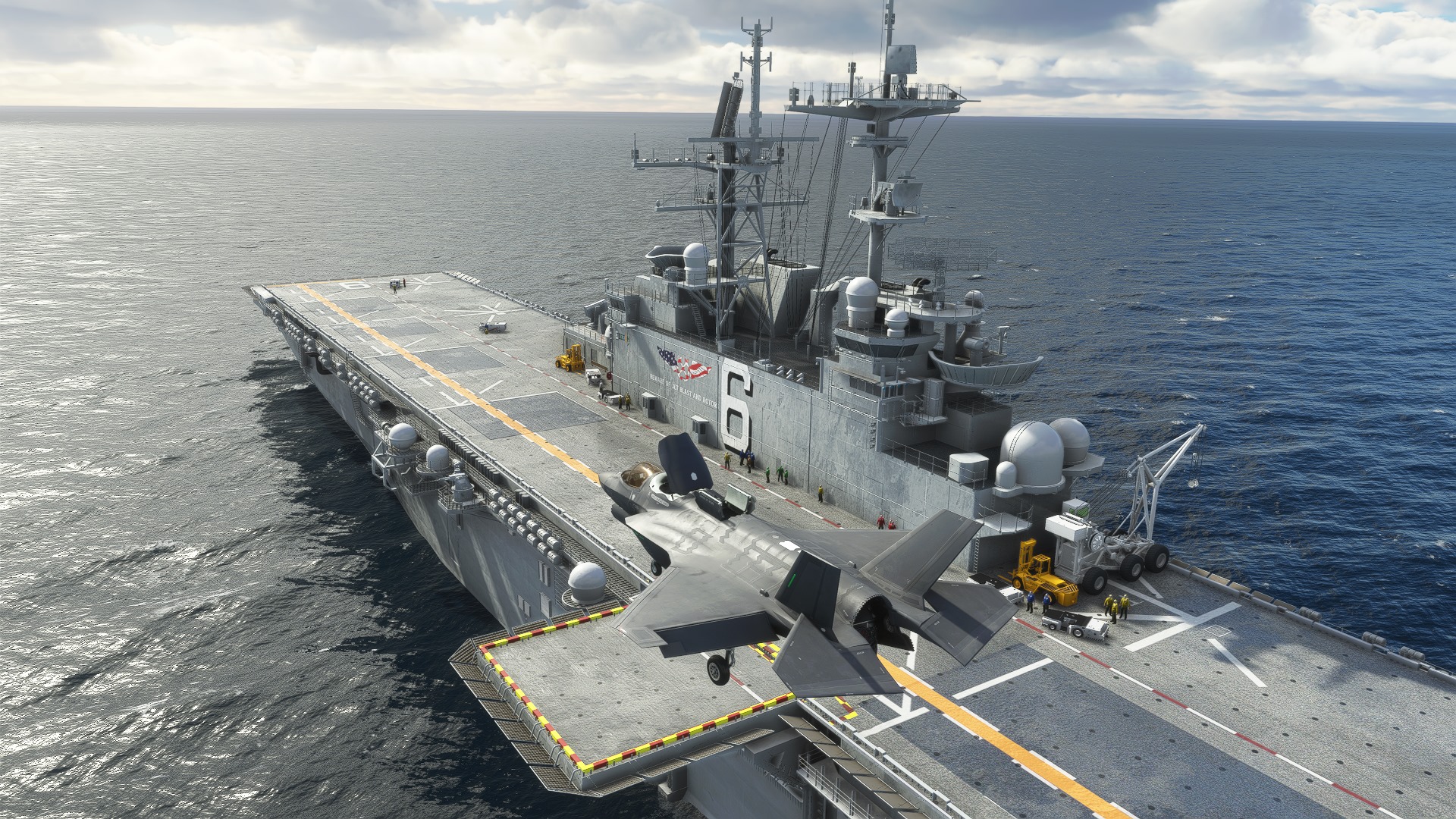 We get new screenshots and a development update from IndiaFoxtEcho about the the F-35 Lightning II.

“F-35B External model is now complete (apart from the usual minor fixes)… and we are quite happy with it.

As for the F-35A, this is basically a total rebuild of our P3D model: we have remastered the main texture to 8K, added a number of details, redone all the secondary textures with Substance and fixed some (minor) dimensional errors.

There is still a lot of work to do in the cockpit, avionics and flight dynamics departments… but so far it seems a decent product.

As flight dynamics, we have been able to reuse most of the code done by Rob Barendregt for the P3D version – STOVL works quite well at the moment and you can perform both vertical and rolling landings.

We have also swapped the model of the USS America with professionally made meshes, and went probably a little too far with the deck details (but performance is still good as we are in the middle of the Ocean). Needless to say, we’d like to include HMS Queen Elizabeth and Cavour – we will see if that will be possible.At the moment we are including USS Tripoli, placed as static object off the coast of San Diego, and USS America, not too far from NAS Iwakuni.

As side note, we have been told that other developers where allowed by Microsoft to add weapons (with visibility conditions) to their Marketplace model. We will check again with Microsoft, but so far we have been clearly said that it was not possible (to the point that they did not allow us to include the training bombs on the T-45). Hopefully they will be more flexible, as the F-35 “beast mode” looks pretty cool.

Next, we get a few images of the exterior of Iris Simulations’ Grob 115E/Tutor T1 light training aircraft, which should be co coming “shortly.”

We get a second trailer from Simulación Extrema showcasing its recently-revealed Amami Airport (RJKA) in Japan. This one also looks very promising.

We also get a new look at Václav Havel Airport Prague (LKPR) in the Czech Republic from Tailstrike Designs, showing the cargo area.

Stairport Sceneries provided another look at St Mary’s Airport (EGHE) in the Isles of Scilly, UK. The airport is in the final phase of testing and currently being optimized for the Xbox version of the simulator as well.

Last, but not least, we get a surprise release from PerfectSoft Studio, which launched Marrakech Menara International Airport in Morocco.

It’s currently available on SimMarket for approximately $18 plus applicable VAT.

Below you can see what it looks like and read a set of features.