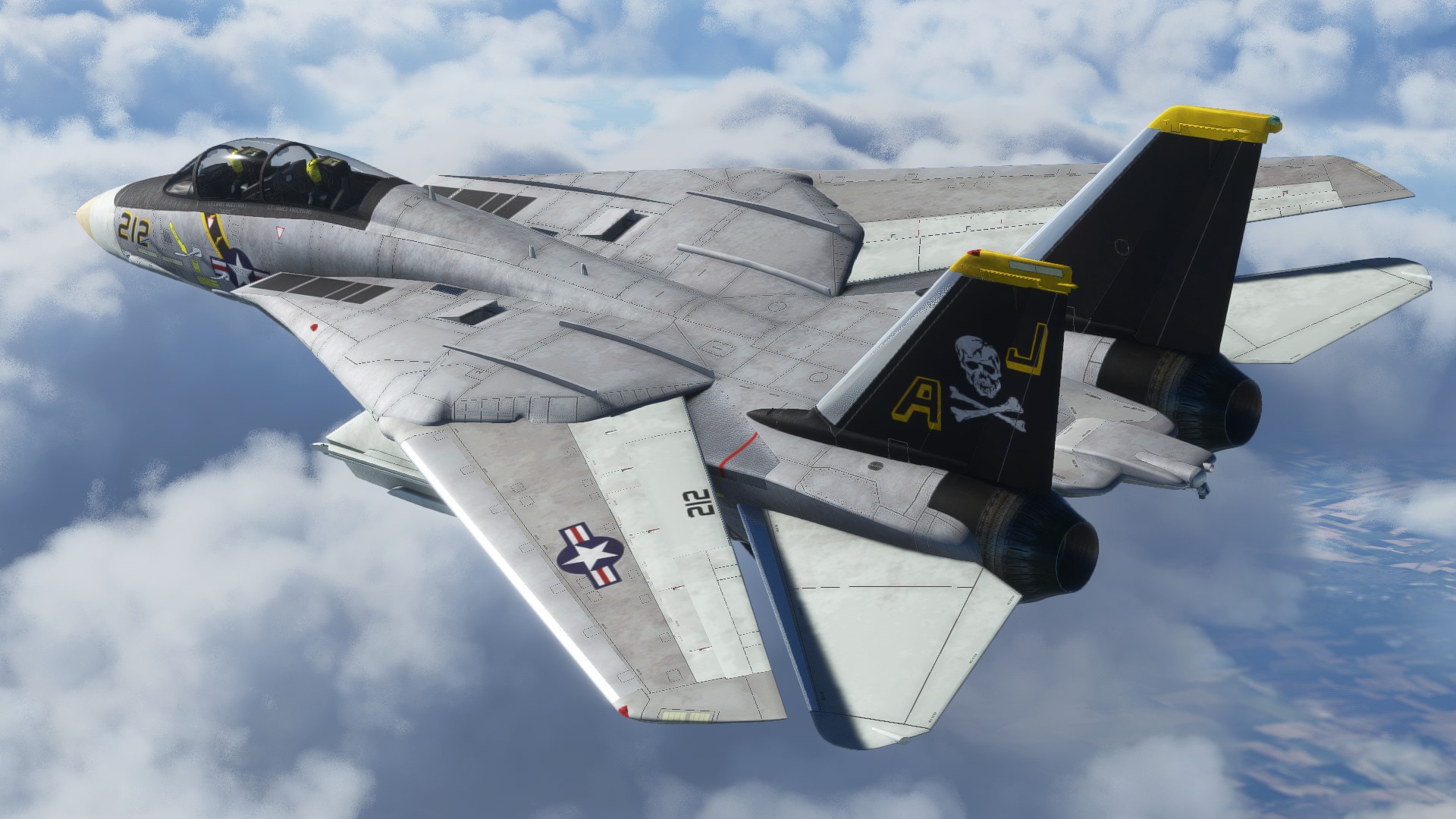 “This week has been about catching up on where I left off, while also starting to incorporate a lot that I’ve learned since last working on the F-14. It’s been almost a month, and it’s surprising how much more knowledge has been gained while working on other projects such as the F-15 update and the Stearman.

Successful tasks completed this week included finishing the coding for both the manual and auto wing-sweep modes, which are controlled by the throttle-mounted wing-sweep handle in an F-14. With the handle-cover down, the wings are in auto-mode, with sweep governed by Mach number. Raise the handle, and manual mode is activated, allowing the user to sweep the wings throughout their range and also into “over-sweep” mode for parking on cramped aircraft carrier decks. The glove vanes that featured only on the F-14A are now also working, with “Off” and “Auto” modes. These will be deactivated on the F-14B as per real life.

Aerodynamics work saw the F-14 undergo flight testing off the coast of California, where the first Mach 2 run was completed and photographed for posterity. The aerodynamics work will now be handed over to CodenameJack447, who will be refining everything from this moment onwards, with reference to real-world F-14 data to bring us the best possible flight experience in MSFS. Furthermore, Sim Acoustics are once again doing the custom sounds for this package, with separate sounds for both the Pratt & Whitney TF-30 engines in the “A” model, and the General Electric F110 engines in the “B” model.

The F-14s HUD and MFD displays are now also functional, although they have not yet been configured for the F-14 and are currently showing data styles from the F-15 Eagles. This will be rectified over the coming days, but having them with basic functionality is important for flight testing. NAV and COM radios are working, along with Transponder.

I’m compiling a list of F-14 features that I would like to incorporate, while also adding code for every switch in the pilot’s cockpit. While those switches won’t necessarily have active functions in the sim, they’ll be ready for future upgrades should that functionality become available. I’d like to ensure that everything works so that it feels more like a fully-functioning aircraft, even though the systems depth will remain “entertainment” level.”

Next is Burning Blue Design, which released new images of White Waltham (EGLM).

NZA Simulations announced that it will release Motueka Airfield (NZMK) for free to accompany its upcoming payware airport, Nelson (NZNS).

It’s now available on Simmarket for approximatelt $21 plus applicable VAT. You can check out what it looks like in the gallery below.

You can find it on SimMarket for approximately $8 plus applicable VAT. Below you can see screenshots and find a features list.