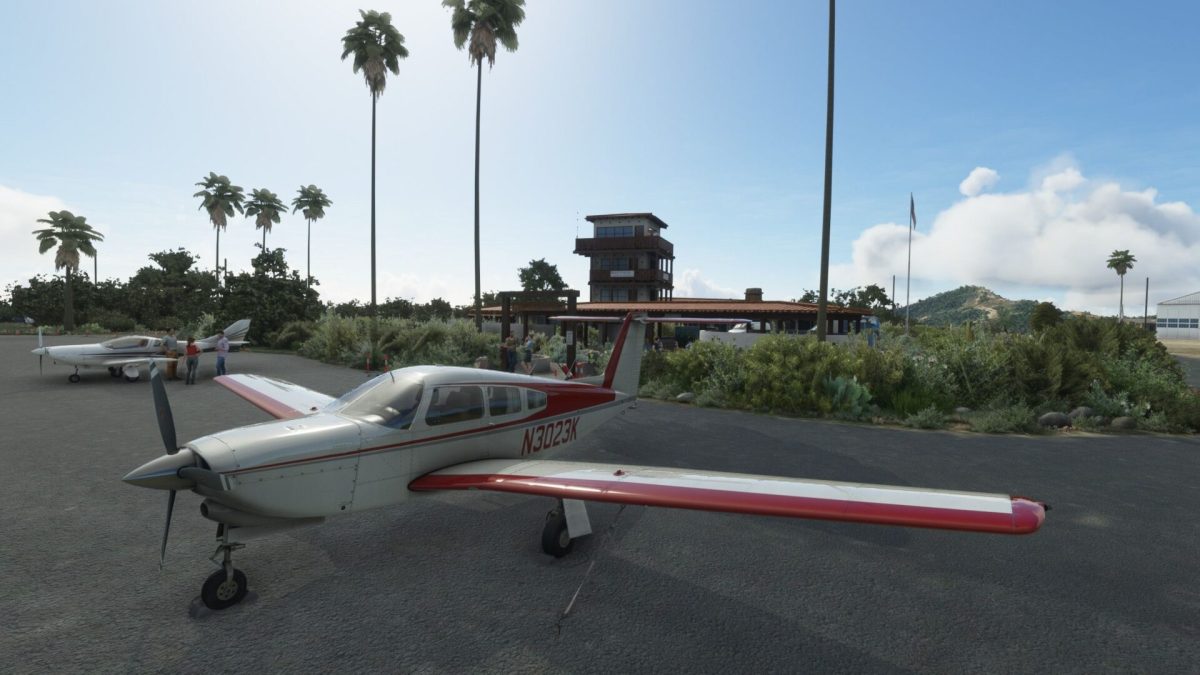 Orbx recently released Catalina Airport (KAVX) for Microsoft Flight Simulator, and it’s certainly an interesting destination for those who love flying over the United States.

Located on the central heights of Santa Catalina Island off the coast of California, KAVX is often nicknamed the “Airport in the Sky” due to the fact that it’s built right on top of one of the island’s highest hills.

This means that it’s one of the most scenic locations you can operate at and that it’s quite small, so you can forget about flying most big aircraft here (at least until someone releases a DC-3). It’s the realm of Cessnas and Pipers, and if you’re into light general aviation, you’ll feel right at home at Catalina Airport.

Catalina Airport can be found on Orbx Direct for $17.59, which means that thanks to the Steam-like Orbx Central client, installing and updating it is a breeze. I personally find it even better than the official marketplace, which can be a bit clumsy at times, especially considering that Orbx Central lets you easily install scenery on a secondary disk.

If you’d like to see what the airport looks like in detail, the first video above showcases an approach and landing on Runway 22, while the one below provides an extensive flyover of the whole area in Microsoft Flight Simulator, airside, landside, and the rest of the island.

As a small general aviation airport, Catalina doesn’t have SIDs or STARs, so there isn’t much to worry about in terms of procedures. The local VOR (which is nicely modeled on a nearby hill) is the only approach aid and it’s basically just a fix to get you started, as the final approach is purely visual.

Runway 22 has a relatively rare variation of the VASI system called PVASI (Pulsating Visual Approach Slope Indicator). Runway 04 has no aids, which is unsurprising since it’s not the preferred landing direction. The only small flaw is that the PVASI should have only one light and here it has two, but you won’t notice the difference until you’re very close. Functionally, Orbx did a good job of reproducing this unusual approach aid.

This is good because you’ll need all the help you can get to get that landing gear down on Runway 22. One of the most interesting aspects of this scenery isn’t that it’s really scenic visually, but the challenge it offers.

The runway thresholds are right at the edge of steep 150‐foot cliffs and you should prepare for downdrafts on short final. On top of that, it’s extremely easy to misjudge the glideslope due to the heavily sloped surface, which has you basically land while climbing.

The runway is actually “humped” which means that after climbing for approximately two-thirds of its length, it drops again toward the 04 threshold. This can cause all sorts of judgment mistakes both while landing and taking off, on top of making traffic at the other end basically invisible if you’re departing.

Add to that highly variable weather and clouds that often drop to the airport’s elevation, and you get an extremely fun, extremely challenging, and extremely beautiful location to add to the simulator. If you need some guidance, the Air Safety Institute has a neat video on the topic.

Looking at the video, you’ll likely notice the one major flaw in the scenery. The runway has recently been repaved with concrete replacing the old (and more hazardous) asphalt surface. Unfortunately, this change has not been included by the developers. Luckily, now that we addressed that, it’s smooth sailing until the end.

Runway aside, the details of the taxiways and apron are spot on (even the runway would be spot-on if it wasn’t outdated, as it’s a correct reproduction of the real one until a couple of years ago) and the orthophoto that serves at the base for the airport is very detailed.

Orbx has done a great job with vegetation, adding just the right amount of 3D grass and including new custom palm trees and cacti that look fetching and fit well alongside the simulator’s default trees.

Moving on to the terminal and hangars, the level of detail is really amazing, with top-notch modeling and texturing that does justice to Catalina’s unique architecture. You’ll find the iconic map of the island and the many informational posters that fill in the tourists on the beauty and nature of the island.

One of the best elements of the airport is that this kind of attention to detail expands far beyond the airport itself. Orbx has added plenty of detailed custom buildings and landmarks in other locations as well, mostly focused around the nearby city of Avalon, including the casino, piers, and even a submarine.

They even implemented the Pebbly Beach seaplane base, which is nice if you want to fly to Santa Catalina on a floatplane or even a helicopter. Do keep in mind that if you’re using a floatplane, you may have to temporarily disable crash damage, as I couldn’t manage to safely taxi from the stand to the water on the Icon, but this is likely a limitation of Microsoft Flight Simulator itself.

The scenery’s attention to detail shines in many areas, including the signage, antennas (which are so often overlooked in this kind of scenery), and vehicles.

One of the elements I absolutely love is the effort that went into placing static people around the airport. Instead of just arranging them randomly, the developers created little scenes that go a long way into making the whole place feel lively and realistic. Even the choice of clothing and hairstyles for the models feels appropriate.

Another fascinating detail is the static DC-3 Dakota belonging to the Catalina Flying Boats freight airline. It was one of the last regular DC-3 operations in existence, ferrying mail between Long Beach and Santa Catalina. The one small issue is that the venerable Dakotas were phased out in 2017 and replaced with Cessna Caravans. That being said, this is one concession to realism that I’m willing to make. Your mileage may vary on this.

Night lighting is well done and the airport reacts nicely to weather, including rain and even snow, despite the fact that frigid weather is rather rare on Santa Catalina.

In terms of performance, the airport is well optimized, giving up only a few frames-per-second (4-5) on my PC (RTX 3070, Ryzen 9 3900x, 32 GB RAM) at 1440p resolution and Ultra detail settings compared to the default scenery, despite the fact that it adds a ton of details. You can see the difference above.

Ultimately, Catalina Airport by Orbx is a very good add-on. If it wasn’t for the outdated runway, it would be very close to perfect. Hopefully, the developers will update it to the current concrete surface down the line.

A lot of scenery for Microsoft Flight Simulator is visually appealing while feeling a bit cold, but this airport feels like it has heart and soul, in no small part thanks to the efforts poured into making it actually feel lived-in.

It’s an airport that provides a lot to explore and discover despite its small size both within and outside its borders, and feels like a lovingly crafted diorama that is easy to recommend. 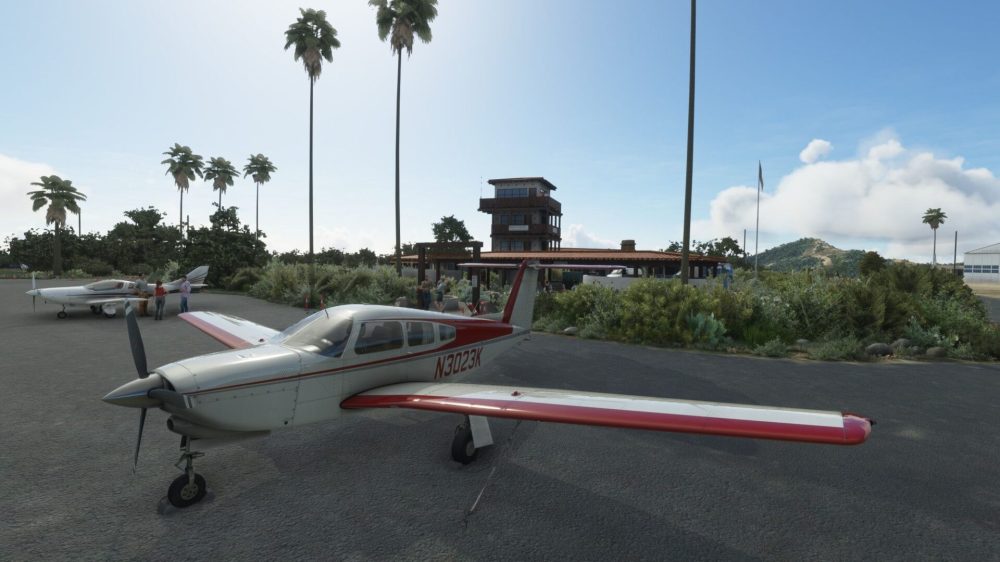