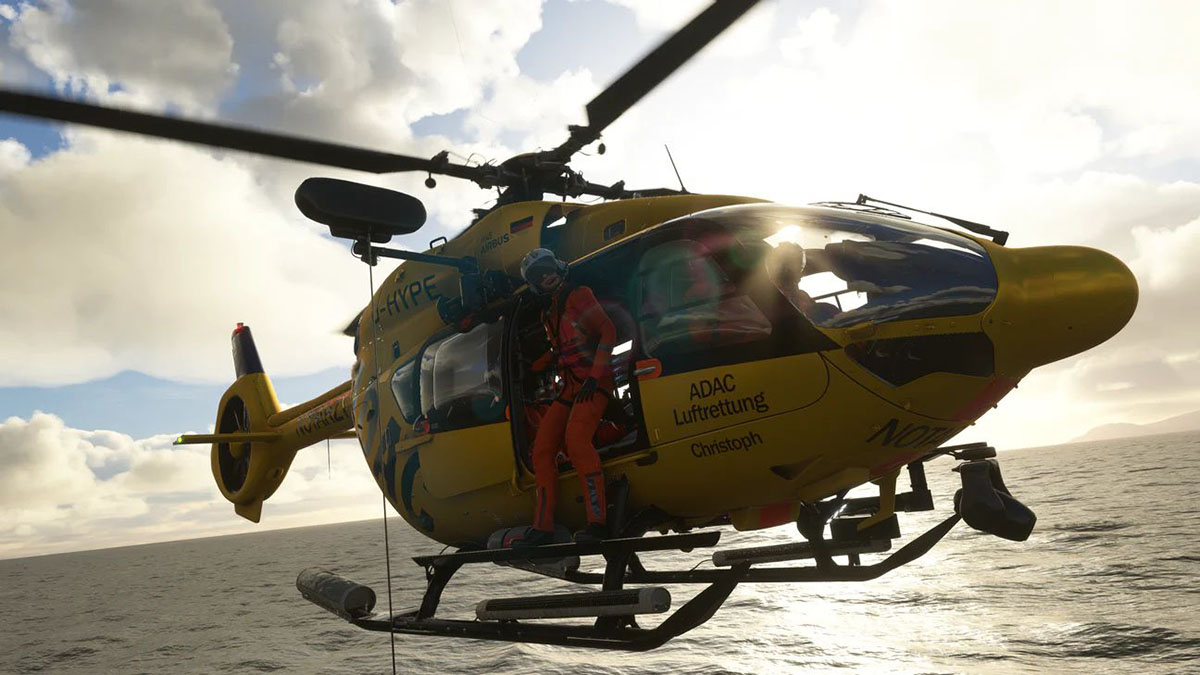 Hype Performance Group is working on one of the first helicopters for Microsoft Flight Simulator even before official support comes with the 40th-Anniversary Edition.

Interestingly, the Airbus H145 and its Action Pack add-on are offered in early access, which is a rare business model for flight simulator add-ons.

Giuseppe: Hype Performance Group is a developer that started pretty much with Microsoft Flight Simulator. Could you explain how was the idea born and how the studio has progressed since?

Steve Daniels: Dave Amenta (HPG’s lead developer) and I first connected over our mutual love of the Icon A5. I had released a performance mod for the A5 and Dave got in touch with me to collaborate. He ended up completely overhauling the avionics and adding autopilot functionality and HPG was born. We then decided that for our next project we wanted to take on the challenge of bringing a native helicopter to MFS despite there being no official support.

We connected with Destroyer121, and with his help and that of some other incredible developers in the community we released our freeware H135 which is the most downloaded item ever on Flightsim.to.

As development was wrapping up on the H135, the community made it very clear that they wanted HPG to deliver a payware level project next and from there we began development of the H145. I’m so proud of the team we have in place today, Dave is brilliant and virtually any idea you throw at him he can make happen.

Our art team consists of Tony and GB and they both had years of professional modeling experience prior to HPG and it shows in their work (and their perfectionism). I genuinely think HPG is in a class of our own when it comes to our systems depth and visual quality and of course innovation. Obviously, we like to challenge the boundaries of what’s possible within Microsoft Flight Simulator.

Giuseppe: One pretty unique element about your studio is that you’re offering your H145 and now its Action Pack via an Early Access model. This is something other flight simulator add-on developers don’t usually do. How is this working for you, and do you think there’d be more room for widespread use of the model in this industry?

Steve Daniels: The Early Access program has been a huge success for our team, but more importantly it’s improved the H145 and the H145 Action Pack experience for the community. One of the great benefits about the Early Access program is that we get feedback in real time from simmers who have already pledged their support for the project – these people are invested in seeing the H145 become the best aircraft possible and together we’re making that happen.

I think there’s enough room in this industry for developers to each have their own unique approaches to aircraft development and releases, but I don’t really have an opinion on if our strategy specifically will become more widespread.

Giuseppe: You personally appear to be a gamer on top of being a flight simulation enthusiast. Does this influence you in any way on how you approach creating add-ons for Microsoft Flight Simulator?

Steve Daniels: Absolutely, everyone on our team has gamed to some extent and the impact this has on our approach to development is that we want simmers to get in our aircraft, be impressed by the visual fidelity and system depth, and once they’re in the air have an experience that is just as exciting and satisfying as gamers get from their favorite titles.

It wasn’t just enough for us to develop a beautiful aircraft, we wanted the sim pilots to be rewarded by being able to learn all the depth of the available systems and now with the Action Pack, be able to complete real activities and missions within the sim as well.

Giuseppe: Yours is one of the first helicopters that have been made available for Microsoft Flight Simulator. What are the challenges of releasing an aircraft based on principles that aren’t officially supported yet?

Steve Daniels: Developing for MSFS is always a challenge as you’re developing for a platform that is always evolving (for the better, for the record), but developing an aircraft that doesn’t have a supported flight model was a huge undertaking.

This is again where the H145 Early Access and the freeware H135 projects benefited our team, we established many contacts with real-world helicopter pilots, mechanics, and other professionals that have helped us do justice to these incredible aircraft.

Giuseppe: With helicopters being officially supported with the 40th-Anniversary Edition in November, do you expect revisiting the H145’s implementation to adopt the systems that will be made available natively?

Steve Daniels: Yes. Currently our plans are to continue our development of the H145 and Action Pack as planned and once the native helicopter flight SDK is available to developers our team will identify if there’s any opportunity to improve our own work with these new native systems.

Giuseppe: As a third-party developer, what do you think about the support provided by Microsoft and Asobo to third parties? Are there any advice you would provide to them on this to make things easier for everyone?

Steve Daniels: As we have not yet released a product on the marketplace, I don’t feel it’s appropriate for me to speak on Asobo and Microsoft’s relationship with third parties.

Giuseppe: As a relatively new studio that started with MSFS, did you find it difficult to approach the community and market your product in an industry that was very established, or perhaps the fact that this is a new simulator helped?

Steve Daniels: Prior to forming HPG with Dave, I had spent time being a content creator, so I had done work with other flight simulator developers and has a good understanding of the typical marketing cycles in this industry.

While this is a very established industry, I think the audience is always willing to give their attention to an aircraft that shows it’s been developed by a team that truly wants their products to be among the best available.

Giuseppe: Pricing, in general, is a bit all over the place in Microsoft Flight Simulator, with some developers still selling add-ons at higher prices, and some selling them for very affordable prices. You’re positioned more or less in the middle, I’d say. Was it challenging to find the appropriate pricing for your add-ons?

Steve Daniels: We want to make our aircraft accessible to as many simmers as possible, but pricing has to be balanced against making sure the company is profitable enough to remain in business and continue to develop high-quality aircraft.

Giuseppe: While work on the H145 and Action Pack isn’t finished, are you floating any idea for possible new projects to create in the future?

Steve Daniels: Our team has a pretty long list of aircraft we’d like to see brought to the sim, and we’d love to be the development team behind many of them.

Giuseppe: Is there any hint you can provide, or they’re top-secret for now?

Steve Daniels: We’re not yet ready to announce what we will work on after the H145 and Action Pack are completed. The best hint I can provide is that as usual, we’re always listening to community feedback.

Giuseppe: I had to try. Is there anything you’d like to add about your products that our readers may want to know?

Steve Daniels: We’d love your readers first to know that we appreciate all of their support! Whether it be through supporting us with a purchase of our aircraft or through being a friend to our team in the community [Editor’s Note: HPG’s Discord Server can be found here].

Aside from that, I want the community to know that the H145 is more than just an aircraft at this point, we’ve built an entire platform around allowing users to enjoy missions like HEMS rescues and firefighting inside the sim using generated missions or by using our editor to create their own missions, some of which are even multiplayer-compatible.