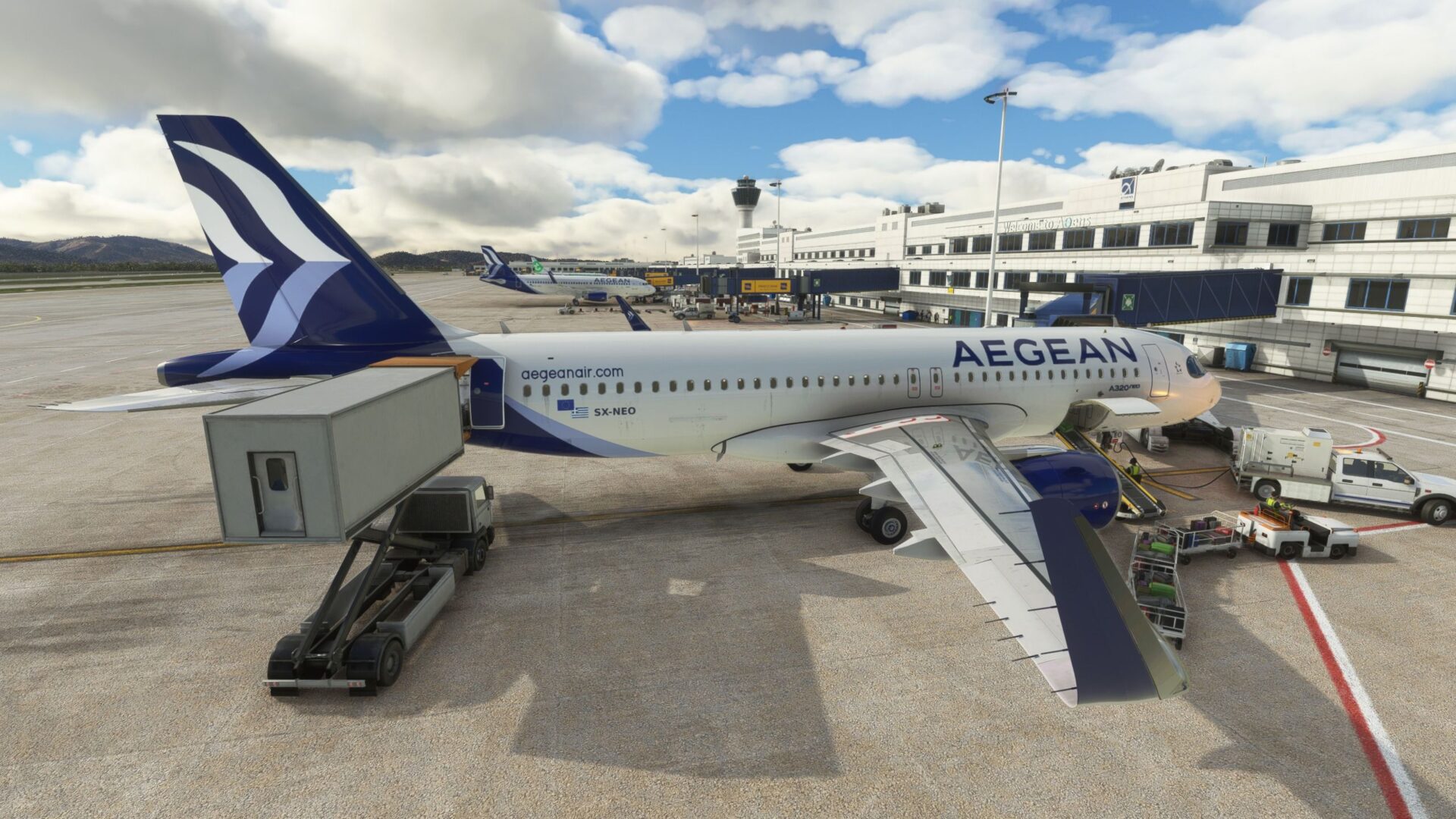 It’s available on Orbx Direct for $18, which means that you can use the handy Orbx Central client to install it and keep it updated.

Thanks to its position at the center of the Mediterranean, Athens airport is an extremely interesting addition for simmers who enjoy flying not only in Greece but also all over Europe.

If you’d like an extensive look at the scenery, you can watch an ILS approach and landing on runway 03R in the first video below, and a full flyover in a variety of lighting and weather conditions in the second video.

Functionally, all the published approaches, SIDs, and STARS are implemented correctly in accordance with the charts, and the PAPI lights on all runways are functional and well-calibrated to guide you on visual approaches.

Ground services mostly work as they should, but there is no option for the refueling truck available, which still appears to be a common oversight.

The airport also works well enough with AI traffic, which is starting to be a relevant factor in development at this point in time. Incidentally, all the aircraft you’ll see on the aprons in the videos and screenshots are AI. They’re not part of the airport itself, which has no static aircraft.

Actually, I lied: There is one airbus A320 in factory colors (implemented using a default AI model by Asobo) in one of the hangars. Honestly, it feels a bit like corner-cutting. If the developers really wanted to fill that hangar, a model with the appropriate Aegean livery would have been more appropriate.

There is an iconic 747-200 in Hellenic Imperial Airways colors in storage. Apparently, it has been sold to Iran in 2015, but it was never delivered. A former Olympic 737-200 is also present, currently used as a fire training dummy.

The ortho used as the base of the airport is detailed enough for an airport of this size, and FlyTampa did a good job with terraforming. A very welcome detail is the drainage ditches, which are almost always left simply painted on the ground. The developers actually represented them in 3D and textured them very nicely to make them look impressively realistic.

The textures used for the runway, aprons, and taxiways are absolutely fantastic, providing a precise and visually fetching representation of the materials. On top of that, all the markings are correct and weathering is absolutely spot-on. FlyTampa did a top-notch job here, featuring a level of realism that has few rivals in this industry.

Moving on to the terminals, the level of quality remains absolutely great. Models and textures can easily be defined at an industry-leading level, topped by great weathering and skillful use of physically-based rendering.

Yet, the devil is in the details, and there are plenty to be found, from all kinds of antennas to appropriate signage (funnily, a microscopic flaw is that FlyTampa left in a couple of small signs in Italian, for some reason, but you’ll probably never notice them). No matter where you aim the camera from the aprons, it’s very hard to find areas that feel empty.

Another fantastic element is the interiors paired with animated passengers and windows that feature just the perfect tinting to reproduce what you’d actually see from outside. This specific implementation of windows and interiors is actually my favorite among all the airports I tested so far for Microsoft Flight Simulator.

The same extreme level of detail extends to the beautifully animated and custom jetways and everything around them, including the appropriate equipment, vehicles, and clutter.

Unfortunately, the VDGS docking system is not functional (solutions for this are mostly still experimental nowadays), but at least FlyTampa did include nice static display models. Too many developers neglect to add those.

Moving landside, the terminal entrance, train station (including fetching 3D tracks, fully modeled catenary system, and animated trains), and many surrounding buildings, offices, hotels, and shops are just as beautifully detailed as the terminals. If there is any drop in quality moving away from the aprons, it’s really hard to notice.

One visible flaw is represented by the roads themselves, which tend to be rather pixelated and low-resolution. It isn’t a big issue during normal operation, but if you like to move your camera around and explore, it’s noticeable.

All this visual glitz doesn’t look any worse in the rain. As a matter of fact, you could say it looks even better, with the wet effects adding further atmosphere to the extremely detailed scenery. Snow coverage is not perfect, but it’s at least acceptable.

Lighting is another high point, with a lot of attention poured into recreating the various kinds of lights illuminating different aprons and areas of the airport. LGAV is just as impressive at night as it is during the day.

One issue that can be seen in some areas is that a few peripheric buildings have their whole textures set to be bright at night. It really doesn’t look good as it appears like the walls emit light. Luckily, this isn’t very widespread.

Looking at performance, my PC (RTX 3070, Ryzen 9 3900x, 32 GB RAM) at 1440p resolution and ultra detail settings lose only 4-5 FPS compared to the default scenery. This appears to be the result of rather amazing optimization work, considering the enormous difference in detail and complexity. You can see a comparison above.

Ultimately, Athens International Airport by FlyTampa is definitely worthy of the developer’s reputation for excellent add-ons.

Despite a few negligible nitpicks, this is an easy recommendation and one of the best airports currently available for Microsoft Flight Simulator.