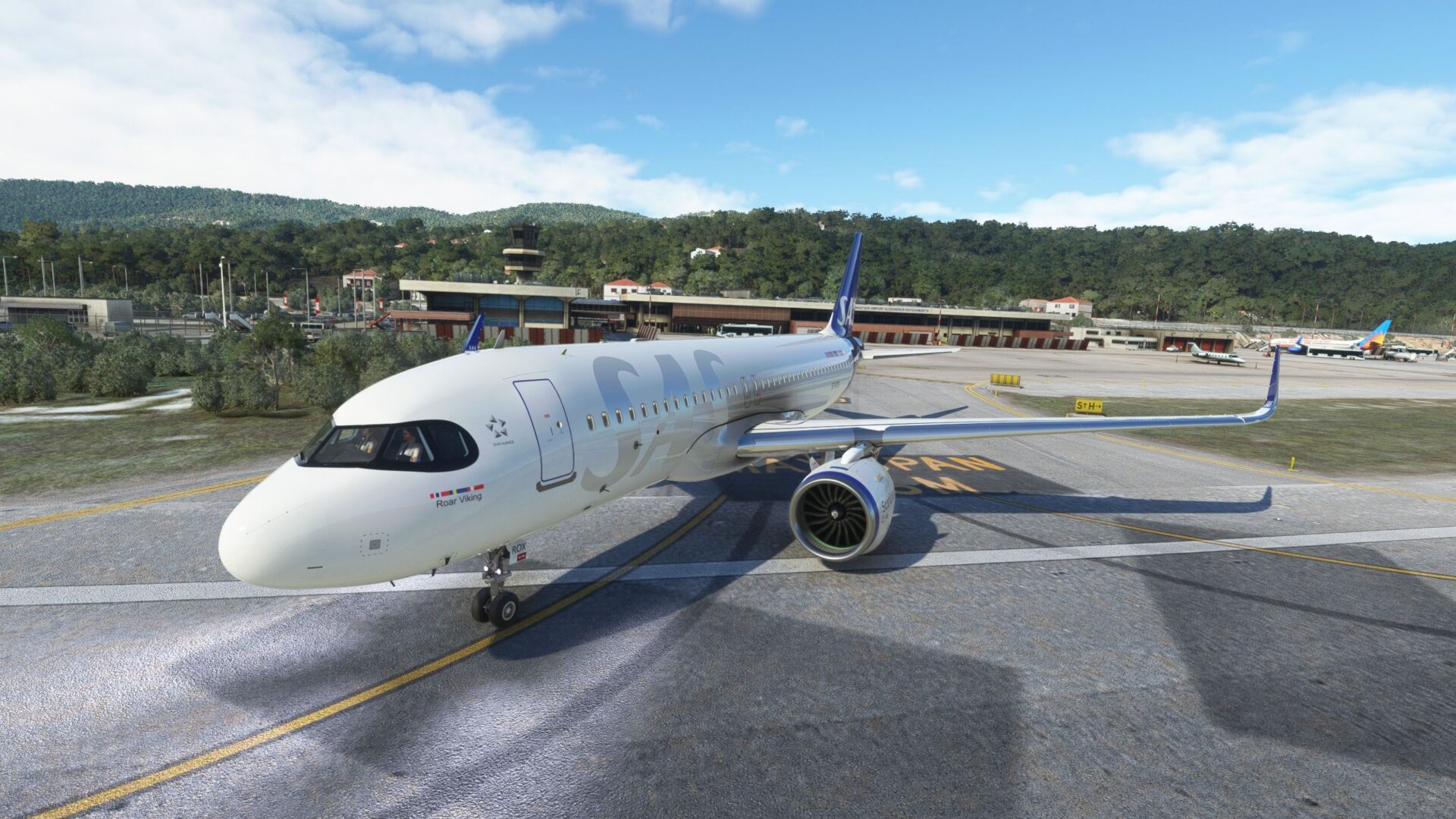 Since it serves as a popular Holiday destination, Skiathos airport is pretty much the domain of seasonal and charter flights. There are regular connections with Athens in the colder months, but those are served by turboprops like the ATR 42. We’ll have to wait a little longer to have those properly implemented in the simulator.

It’s also a very interesting airport due to its highly sloped runway and scenic approach over the city, its bay, and port.

It’s currently available on Orbx Direct for $17.49, which means that you can use the convenient Orbx Central client to install the airport and keep it up to date.

If you’d like an extensive look at the scenery, you can watch an approach and landing on runway 01 in the first video above, and a full flyover in a variety of lighting and weather conditions in the second video below.

Functionally, you should not expect much in terms of procedures. The few published SIDs and STARs work correctly out of the box, but both runways only have obsolete LCTR approaches and PAPI lights as visual aids.

They are correctly calibrated and combined with the sloped, short, and narrow runway, they make Skiathos a very challenging and extremely fun airport to land at with narrow-body airliners like the Airbus A320. If you butter this landing, you can be proud of yourself.

The few taxiways are also properly labeled and implemented, not that this is a particularly challenging airport to navigate once you’re on the ground. Most proper ground services are available, but refueling has been neglected, which appears to be still a rather common oversight.

A very welcome feature is the ability to enable and disable static aircraft. With AI traffic solutions around the corner and many flying online on VATSIM or similar services, this is becoming a must and not all developers have caught up to this necessity just yet.

Yet, there is a flip side to this coin: the static models used if you choose to enable them are very low in quality. Both the rough models and low-resolution textures appear to be hands-me-down from the times of Flight Simulator X, if not earlier. They may have been acceptable in older sims, but not in Microsoft Flight Simulator in 2021. Other developers have proved that much better quality can be achieved with a negligible performance impact.

I could understand saving on these if they were something designed to be seen only from a distance, but they’re right on the main apron, just a few feet from your own flight deck when you park or when you set up your flight. There’s no way to miss how janky they look, so I’d definitely advise disabling them, and I hope that Orbx will work on a new library of statics going forward if they plan to keep implementing them.

Speaking of the ground textures, the developers have done a definitely great job with the runway, taxiways, and aprons, which are updated to the new and expanded layout, look great and feel very realistic in materials, markings, and weathering.

The aprons are also nicely decorated by plenty of appropriate clutter, vehicles, and equipment, on top of passengers, enhancing the sensation of realism further.

The terminal and service buildings are also extremely well modeled and detailed both airside and landside. It shows that a lot of love has gone into reproducing every little bit, including things that often go overlooked like railings, smaller antennas, various equipment, and even animated fans in the air conditioning system. Talk about dedication!

On the flip side, some textures appear to suffer from resolutions that may be considered a bit low for Microsoft Flight Simulator nowadays, for instance causing some signage to be barely legible and look smudged.

This is partly offset by great weathering work and skillful use of physically-based rendering, which make most materials feel quite realistic and tactile.

There is no airport interior and the windows are opaque. While the reflective PBR helps in making them look better, this is a terminal with big windows adjacent to the general aviation apron, so an argument in favor of a modeled interior would definitely be pretty compelling, especially considering just how much love and attention have been lavished across not only the airport but the whole island.

This is where Skiathos by Orbx perhaps shines the most: calling this add-on Skiathos Airport may even be considered a bit of a misnomer because you actually get the whole island modeled in great detail.

If you venture with the camera outside of the fence of the airport, you’ll notice that the developers have spared no effort in turning the rather drab default scenery into what’s effectively an extremely detailed diorama.

The city of Skiathos itself is a charming miniature of the real one, including the port with its many boats and ships and the seaside promenade with its restaurants, cafes, and ships. They even have little outside areas with colorful tables where the tourists dine and hang out. If you have ever visited Skiathos, the atmosphere will make you feel right at home.

You’ll find monuments like that of the Unknown Sailor or the memorial to the crew of the submarine Katsonis. Climbing the narrow streets of the city you’ll spot the iconic churches of Agios Nikolaos and Mitropolitikos Naos Trion Ierarchon. The beaches are equipped with parasols, kiosks, and chairs to welcome holidaymakers, and the streets are lined by power and telephone lines.

This isn’t just true close to the airport, but everywhere on the island. Pretty much all buildings have been replaced with models more appropriate to the location. The only little flaw on this is that the LOD settings perhaps aren’t optimal, so the houses pop into view a tad too suddenly as you approach the runway.

There are also plenty of people, vehicles, and boats all over the place, making the diorama feel even more lively. You’ll even find plane spotters near the threshold of runway 01, which is a popular real attraction for those interested in aircraft photography. This is pretty literally one of the most detailed locations outside of pure airport packages available for the simulator at the moment of this writing.

That being said, I wish that at least the passenger and vehicle models used in the airport itself were of higher quality. They also suffer a bit from the obsolescence showcased by the aircraft models, and they’re none too pretty when you get close. And since they’re right on the apron, you do get close.

I can absolutely understand saving on performance for models outside of the airport itself or even landside on the parking lots and surrounding areas, but those just a few feet from active ramps where you’ll park your aircraft should warrant higher-quality modeling and textures nowadays.

The airport reacts very well to Microsoft Flight Simulator’s weather. The textures look lovely when wet, and it’s actually one of the few sceneries in which snow coverage is nearly perfect. You don’t see abrupt borders between snowy areas and clear ones on the runway and aprons, which is rare and very laudable.

Lighting is good in the airport itself, but it’s perhaps a bit lackluster in the rest of the island, where very few buildings and no boats have lit windows. Even the (very nicely modeled) lampposts on the promenade emit no light, and most of the illumination is provided by the omnipresent “Asobo Globes” that most would like to see gone. This creates an opposite effect compared to daytime, making the town look way too sleepy.

Considering that we’re looking at a popular holiday destination, houses and many boats should be lit up until late at night. This is a missed opportunity to make this scenery and the approach to runway 01 even more scenic and stunning.

Speaking of performance, Orbx did a great job here. My PC (RTX 3070, Ryzen 9 3900x, 32 GB RAM) at 1440p resolution and ultra detail settings lose only 3-4 FPS compared to the default scenery in Microsoft Flight Simulator, which is infinitely less detailed. You can see the difference above.

Perhaps we could say that there certainly is enough performance headroom for higher-resolution textures and models within the airport borders, more lights across the board, higher LOD settings to avoid sudden pop-in, and perhaps some interior modeling for the terminal.

While I’ve listed a few flaws above, and only some of these could possibly be defined nitpicks, we have to admit that what this scenery includes far outweighs what it lacks.

If you enjoy scenery add-ons that massively Improve not just the airport, but also the surrounding area, creating super-scenic approaches (on top of challenging landings) and an effect akin to lovingly-crafted dioramas, Skiathos Airport by Orbx is definitely a great choice.