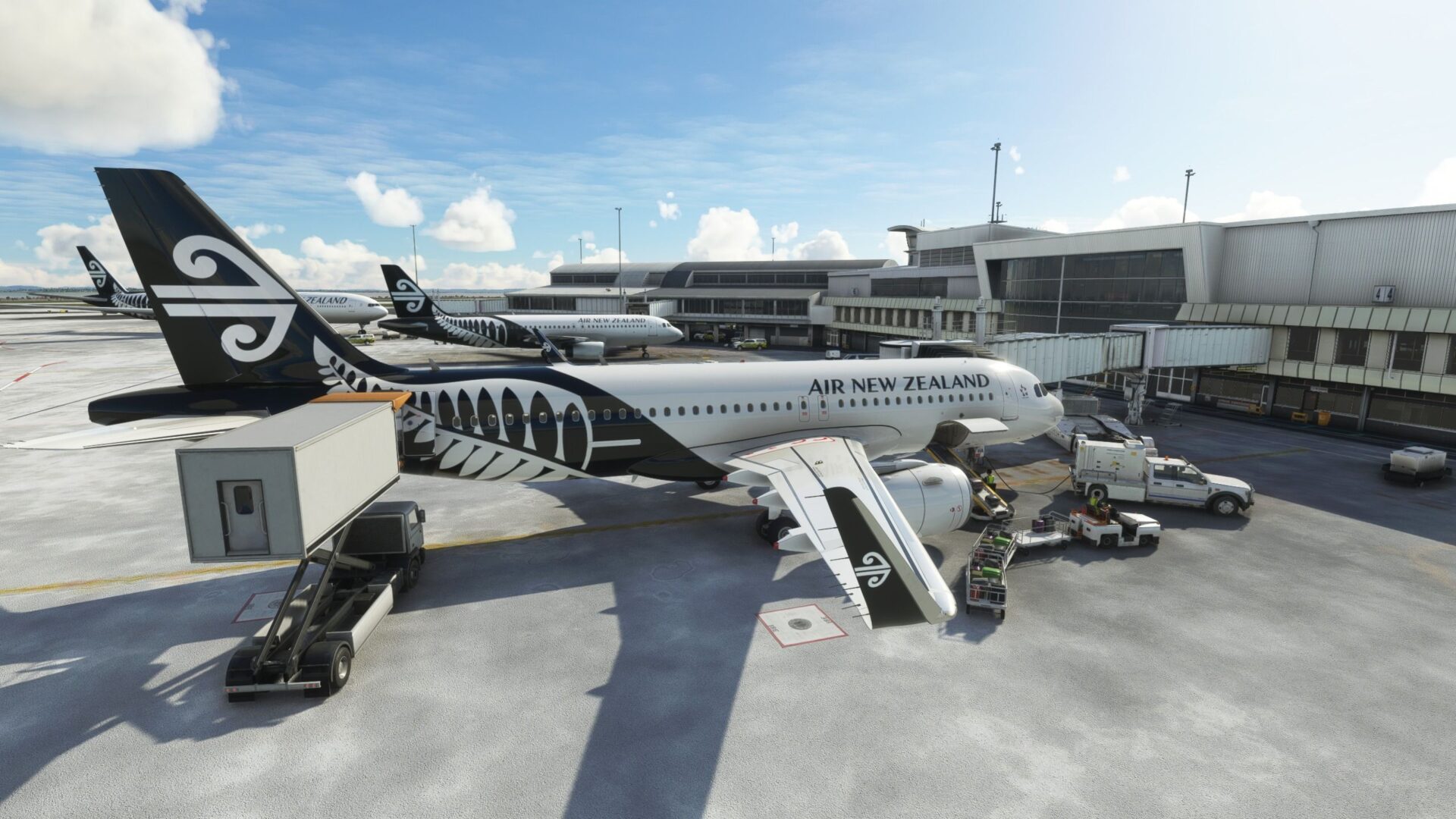 Serving thw most populous urban area in New Zealand and being the largest and busiest international hub in the country, it’s the perfect base if you’re interested in flying over this beautiful gem of the Southern Hemisphere. It’s host to intense passenger and cargo airline traffic, on top of general aviation, so it’s a good choice pretty much regardless of what you like to fly.

It’s available on the developer’s own store for $19.99, while installation and updates are a breeze thanks to the Contrail app.

If you’d like an extensive look at the scenery, you can watch an ILS approach and landing on runway 05R in the first video below, and a full flyover in a variety of lighting and weather conditions in the second video.

All the published approaches, SIDs, and STARS are implemented correctly in accordance with the charts, and the PAPI lights on both ends of the runway are functional and well-calibrated to guide you on visual approaches. Ground services are also fully operational, including the much-forgotten fuel trucks.

The airport works well with AI traffic, which is starting to be a very relevant factor in scenery development for Microsoft Flight Simulator at this point in time, with multiple traffic solutions in the works. The only small issue I’ve noticed is that gates have not been set up with the proper codes for the airlines that park there in the real world, so Airliners will dock pretty much anywhere they want.

The package comes with static models of adequate quality but you can configure it so that they don’t appear, which is laudable and very useful if you fly online on ATC networks like VATSIM or if you use an AI traffic solution. In the first video above and the first 4 minutes of the video below, you can see the airport with no static aircraft and a freeware AI solution currently in testing. After the 4 minutes mark, the second video shows the statics that come packaged with the airport, so you can see the difference.

The ortho used as the base of the airport sports good resolution and nice details, above the average you see in scenery of this size. The terraforming is also good, with the airport correctly elevated over the water level. I definitely appreciate the details of the breakwater, fence, and approach light bridges, which are very well modeled.

The textures used for the runway, aprons, and taxiways are pretty good, with an adequate representation of the materials used in the real world, albeit not perfect. Looking at multiple recent video sources, the surfaces feel a bit too bright and pristine, while there are a few very small inaccuracies in the markings (and I mean nitpicks like a number that lacks its red background or the blue walkways missing the white stripes). That being said, lines and numbers show just the right balance between visibility and wear.

Functionally, all the taxiways appear to be correctly marked and you won’t have any issue finding your way around the airport following the indications from ATC.

The true stars of this scenery are its buildings and in particular the terminals. They’re extremely detailed and absolutely impressive. You’ll see a level of care in reproducing every little feature, tidbit, and signage that is rare in airports of this size.

High-quality modeling and great high-resolution textures are topped by skillful weathering and use of physically-based-rendering for a very realistic feel of surfaces and materials.

I’m not 100% positive I agree with the idea to paint most terminal interiors black with very limited details. The developers claim it helps make the windows look realistic from the outside, but I feel that the experiment is only partly successful, having seen different solutions yield, in my opinion, better results in Microsoft Flight Simulator.

On the other hand, the towers have beautifully modeled interiors in which you’ll even find a few funny Easter eggs.

The jetways are custom and fully animated, sporting fantastic models and details just as much as the buildings they’re attached to. The only small issue is that their segments are a bit short, so small gaps will appear with certain aircraft.

The beauty of the terminals extends to the masterfully crafted landside area and peripheral buildings like hangars, warehouses, offices, shops, and more. I definitely appreciate the fact that Flightbeam added bespoke and highly detailed textures to the access roads instead of leaving the task to the pixelated ortho as many do.

There are a couple of buildings that are outdated in their portrayal, but FlightBeam already promised that they will update the airports with the results of recent and current construction.

They also mention that the VDGS docking system will be added at a later time when its programming is ready. That’s understandable, but I’m not a big fan of omitting the physical displays, which would have been welcome even if non-functional. Admittedly, this is not an uncommon choice, but seeing the modeled supports left empty isn’t ideal.

I really love the airport vehicle and equipment clutter on the aprons, which come with adequate density, good detailing, and appropriate liveries, making the airport feel lively and improving the sense of realism.

Speaking of weather, the textures react well to rain, which goes as far as enhancing the looks of the airport thanks to the reflective wet effects. On the other hand, snow coverage could be better, with the usual patchwork of clean and snowy materials.

Night lighting is good, giving the airport a great atmosphere, and I particularly appreciated the effort of implementing custom taxiway lights (with a much better effect compared to the default ones that nearly everyone uses) and approach lights. That being said, the latter lack visibility in foggy conditions and Flightbeam already admitted that they require further work and will be updated.

Incidentally, it’s worth mentioning that this add-on works perfectly well with Orbx’s Auckland City package (actually, they complement each other perfectly) and New Zealand mesh add-on. If you have those, you’re in for an additional treat.

This isn’t bad for an airport of this size that adds this much detail compared to the absolutely bland autogen version. At least with my hardware, things certainly stay fluid enough.

Ultimately, Auckland International airport is a high-quality add-on that enriches the location massively. There are a few nitpicks and small issues (some of which are entirely subjective), but we’re looking at a very solid product worthy of Flightbeam’s reputation.

If you like to fly over the beautiful mountains, forests, and volcanoes of New Zealand and enjoy flying airliners of all types, this is a very easy recommendation.