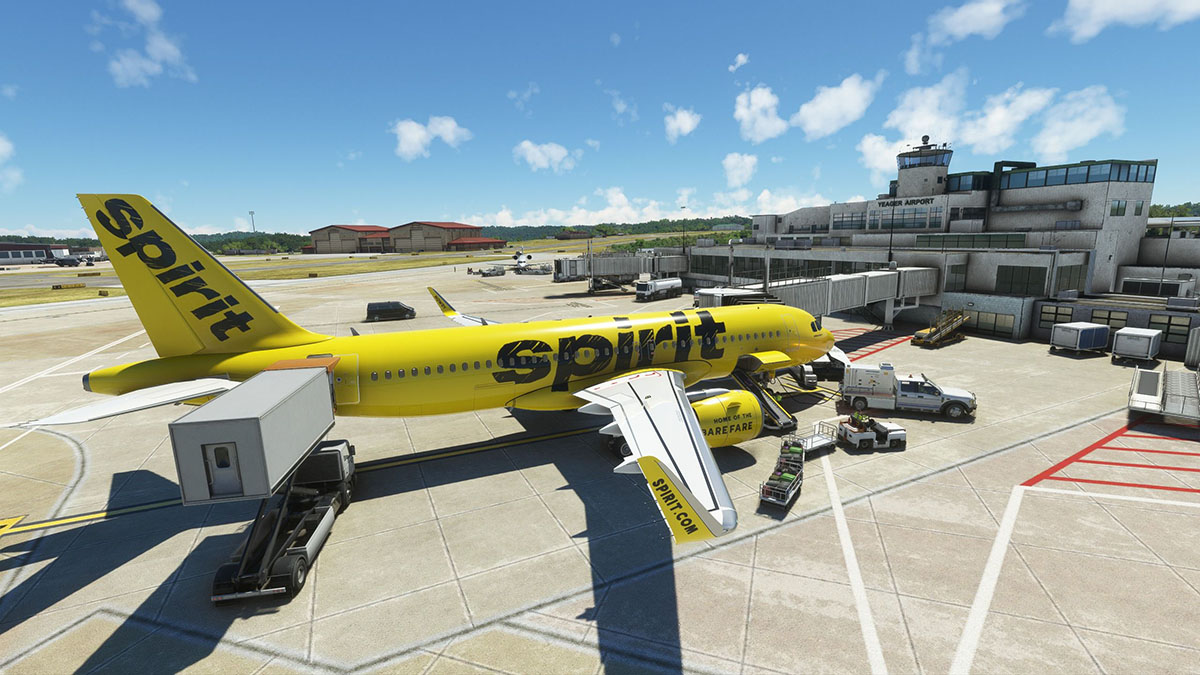 This airport is definitely interesting, considering that it’s built on top of a large hill. With its runway length of 6,715 feet and elevation of over 900 feet, it’s one of these commonly defined “aircraft carrier-style.”

On top of that, it’s a regular destination for CRJ-700s of multiple airlines, so if you enjoy flying Aerosoft’s regional airliner and seek some scenic and challenging approaches, this is a very good candidate. Yeager Airport is basically a CRJ heaven.

It’s currently available on Orbx Direct for $16.81, which means that it benefits from the handy Orbx Central client for installation and updates. An Xbox version has not been confirmed officially at the time of writing, but Orbx is quite good at porting its scenery to consoles.

If you’d like an extensive look at the scenery, you can watch an ILS approach and landing on runway 23 in the first video above, and a full flyover in a variety of lighting and weather conditions in the second video below. Do keep in mind that the CRJ and Airbus airliners are not part of the scenery’s static aircraft. They’re either playable or AI aircraft.

Speaking of AI, the scenery handles all sorts of AI traffic without issues, which is always a good thing.

All the published instrumental approaches work well, and the ILS approach to runway 23 is quite interesting, as you’re required to disconnect the autopilot below 1,700 feet, making for a slightly more challenging landing in combination with the short runway. The PAPI lights on runway 05 and VASI on runway 23 are correctly reproduced and calibrated, so you’re all set for visual approaches as well.

Taxiways and ramps are correctly labeled and all ground services are present, including the fuel trucks, which developers seem to forget much less nowadays. Basically, we’re looking at an airport that’s functionally spotless.

The orthophoto that serves as the base for the airport is nicely detailed and up to date enough to portray the work done to extend the threshold of runway 5. It’s always nice to see developers not simply sticking to Google Maps (which is radically outdated) and going the extra mile with this.

One of the most impressive elements of this scenery is terraforming, which is exceptionally good. Being built on extremely hilly terrain, Yaeger Airport required a lot of work on the elevation both for the airport itself and the surrounding area. Orbx’s developer definitely rose to the challenge here, doing some of the best terraforming work I’ve seen in the simulator to date.

Texturing of runways and taxiways is generally well done with the simulation of most materials that looks very realistic and has the right amount of weathering and dirt. Yet, there are a few flaws here, like some cracks on the tarmac that are a bit too strongly marked, appearing cartoony, and some patches that don’t match the most recent photographic and video sources I could find, likely due to recent repaving works.

That being said, the runway and taxiway markings are accurate and match the real ones, with a good balance between definition and weathering.

The terminal building looks great, with skillful modeling and texturing both airside and landside. The level of detail is spectacular and crowned by proficient use of weathering and PBR. Even zooming in all the way, you’ll find that the buildings hold up well, retaining a realistic feel.

The interior of the terminal is also beautifully modeled, with windows tinted just right. The effect looks great when you’re sitting at a gate preparing for a flight.

The jetways also look awesome, with a level of detail and weathering that matches well with the surroundings and the correct elevation. Yeager airport plays host to so many CRJs that many of its jetways are built lower on the tarmac to better facilitate boarding.

The rest of the buildings, from the military facilities to the east and the general aviation aprons to the south, are just as beautiful and detailed as the terminal, including well-known elements like the Marshall University flight school. Only the new customs building on the main general aviation apron is depicted as still under construction, which is not up to date, but I’m willing to forgive this since it was opened literally yesterday.

Smaller but relevant elements like antennas, survey equipment, vehicles, additional clutter on the aprons, fences, gates, signage, and more are really well done, making the airport feel alive and nearly photorealistic. It shows that a lot of love went into modeling and placing them. When even the garbage bins are where they should be and look like their real-life counterparts, you gotta appreciate the passion.

The airport has a number of static aircraft, but they’re limited to general aviation and military, which is a good balance as they won’t get in the way of AI traffic or when you’re being directed to park at a specific gate. The inclusion of the correct liveries for the Marshall school and the West Virginia Air National Guard C-130 Hercules transports that are actually based at Yeager airport is a nice touch.

The developer also went above and beyond the call of duty by modeling plenty of buildings outside of the airports and all the way into Charleston, including visible landmarks like stadiums and the bridges on the Kanawha River. This makes an area that isn’t covered by photogrammetry much more recognizable.

Speaking of performance, Orbx did very good optimization work: despite the enormous difference in detail between the default version of the airport and the add-on, I lose only 5-10 FPS on my PC (RTX 3070, Ryzen 9 3900x, 32 GB RAM) at 1440p resolution and ultra graphics settings.

Night lighting is a bit disappointing as I found it rather weak across the board. There is also the mystery of the approach lighting to Runway 23: it has a beautifully-modeled and rather majestic bridge, but there are no lights. To be fair, I could not find video evidence of those lights being used during the day, nor any sources for night operations, so, regrettably, I can’t give you an accurate assessment of how relevant this is.

Yaeger airport works fairly well with the weather, with textures that look good in the rain and snow coverage that isn’t perfect, but it’s still better than most. Developers are still limited by the simulator itself in what they can achieve on this front, unfortunately.

Ultimately, Orbx’s West Virginia International Yeager Airport is definitely a good effort in recreating the airport and its surrounding area. While there are a few relatively small blemishes here and there, it’s impossible to ignore the love and attention to detail that went into creating this add-on.

If you enjoy flying into this area of the United States, “aircraft carrier-style” airports, and even more so if you like challenging but scenic approaches and the CRJs, it’s very easy to recommend this one. 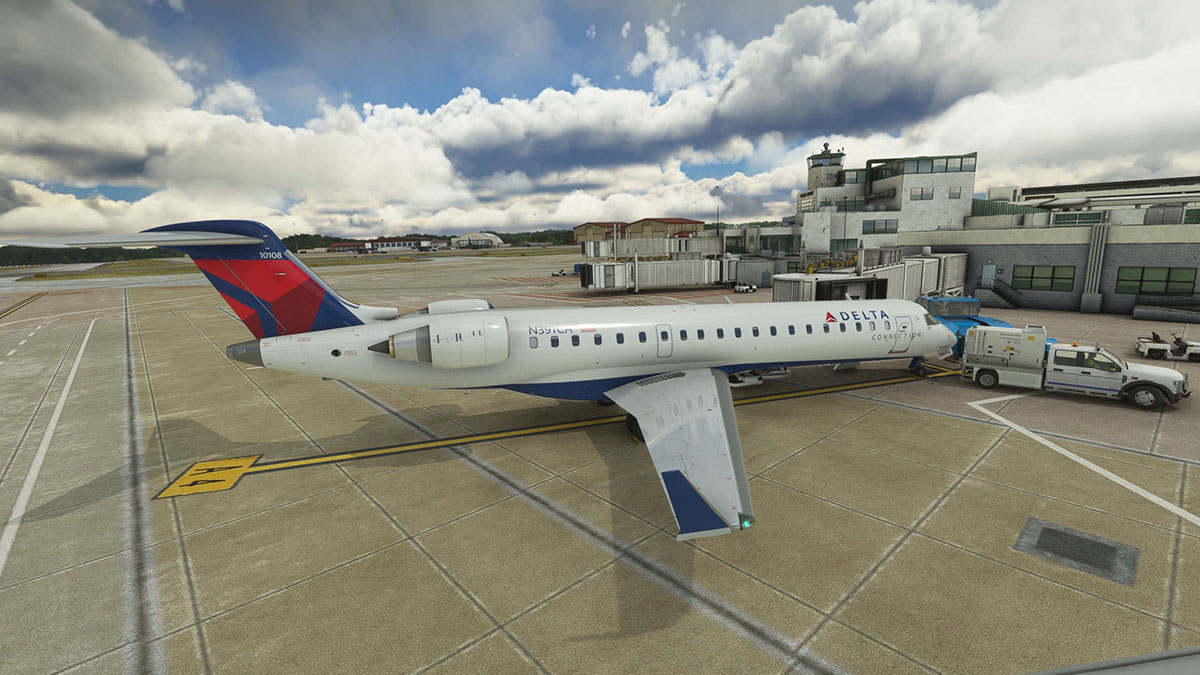