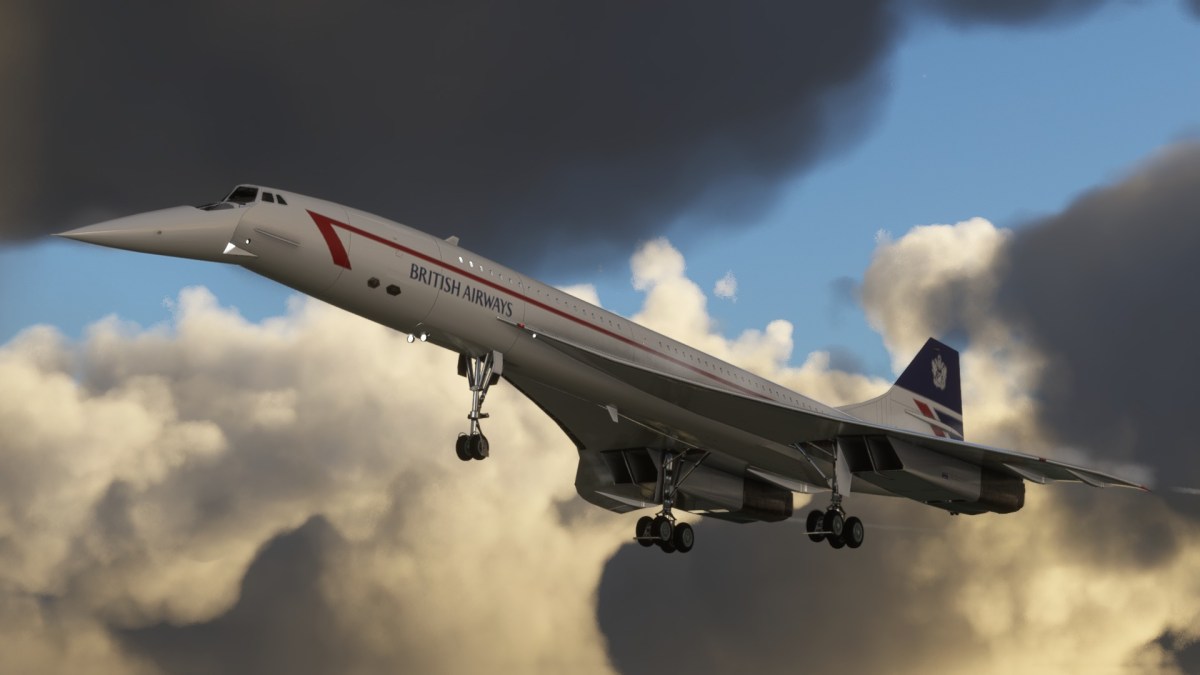 We start with DC Designs and its concord, which received the first video showcasing a take-off with full reheat from Heathrow.

We also get new screenshots and a development update from the developer.

“Much progress once again this week aboard Concorde’s flight deck. Much of the work has continued to be focused on instruments and systems coding, trying to get everything working as close as possible to the way it did aboard the real aircraft. All annunciator lights are now active, either under specific systems-orientated code or under the control of the light test switch until their full code is ready. The pilot’s instruments are now also fully operational, with the First Officer’s instruments to follow, leaving just the engineer panel remaining ( some instruments are working there, but most gauge needles are still to be animated ). CodenameJack has also worked out how to simulate Concorde’s thirteen fuel tanks using the sim’s eight so that will also increase the realism of flight operations.

One interesting fact about Concorde was how the fuselage stretched almost two feet when at Mach 2, due to the heat from friction caused by slicing through the atmosphere faster than a rifle bullet. Famously, on her last flight, the captain of one Concorde took off his cap at Mach 2 and pushed it into a gap that always formed in the cockpit during supersonic flight, which closed up again when they slowed down to land, forever trapping his cap in place. Concorde fans will be delighted to know that this “stretching” has now been replicated in the DC Designs Concorde. The supersonic stretch can be seen in the increasing size of that same gap where the captain left his cap, between the engineer’s panels and the rear wall of the cockpit. Images of the “stretch” can be seen in this week’s screenshots. It’s another one of those unique Concorde features that I’ve been very keen to add. The reason I’ve been able to take a screenshot of the feature is that in the fastest test flight yet, Concorde reached Mach 1.78 at 44,000ft less than an hour after taking off with a full fuel load. At that point in the flight, she was still too heavy with fuel to go any higher or faster, a genuine feature of the real Concorde. Concorde will now reach Mach 2 as more fuel is burned off.

The flight model continues to be improved as we get ever closer to the fairly narrow spectrum in which Concorde operated. The sim’s new FUEL_SYSTEM is now responsible for the transfer of fuel between the stability tanks that control Concorde’s pitch trim when supersonic, replacing the older “event” code that I created in FSX and Prepar3D, and also will be linked to a slightly more complex fuel management system. However, I will not be looking to replicate full complexity here, in order to keep Concorde as accessible to newcomers as possible. A certain level of automation will also be present in terms of fuel control, if required by the user.

I am hoping that if all goes well between now and the end of the month, I will then be able to turn attention to improving the exterior model detail and also adding the passenger cabin. A few bottles of champagne and some suitably upper-class passengers may also find their way into the model during this process. Exterior detail plans include all loading doors, many access panels, interactive refuel and ground power panels, and of course more decals, weathering and general enhancements. Enhancements already in place include low-pressure vapor on the wing leading edges, wing-tip contrails, engine smoke, landing light effects and of course high-altitude exhaust contrails.”

The next video comes from Hype Performance Group showcased the battlefield support version (H145M) of its Airbus H145 helicopter. It will be released to early access backers this weekend, and it’ll include a visualization of the rocket launchers in action (of course, actual combat isn’t simulated).

Another interesting video comes from FlyByWire which showcases support from DME Arc navigation added to the “Experimental” version of the popular freeware A32NX Airbus A320 Neo add-on.

Moving on to releases, we get the Fouga CM.170 Magister jet trainer by AzurPoly, which has been launched on the official marketplace.

The aircraft is priced at $24.99. As far as I could find, it’s available only on the official in-sim marketplace for now, so you’ll need to search for it.

Below you can watch the trailer by AerOdyssey.

It’s priced at a rather affordable $9.99 and you’ll need to search for LICJ in the in-sim marketplace to get it. You can see what it looks like below.

It’s priced at approximately $15 plus applicable VAT on SimmMarket, and below you can take a look at a trailer.

Last, but not least, Dreamflight Studios released McClellan-Palomar Airport (KCRQ) in California, US.

It’s priced at approximately $15 on SimMarket and Contrail.

Below you can take a look at what it looks like in a gallery of screenshots.