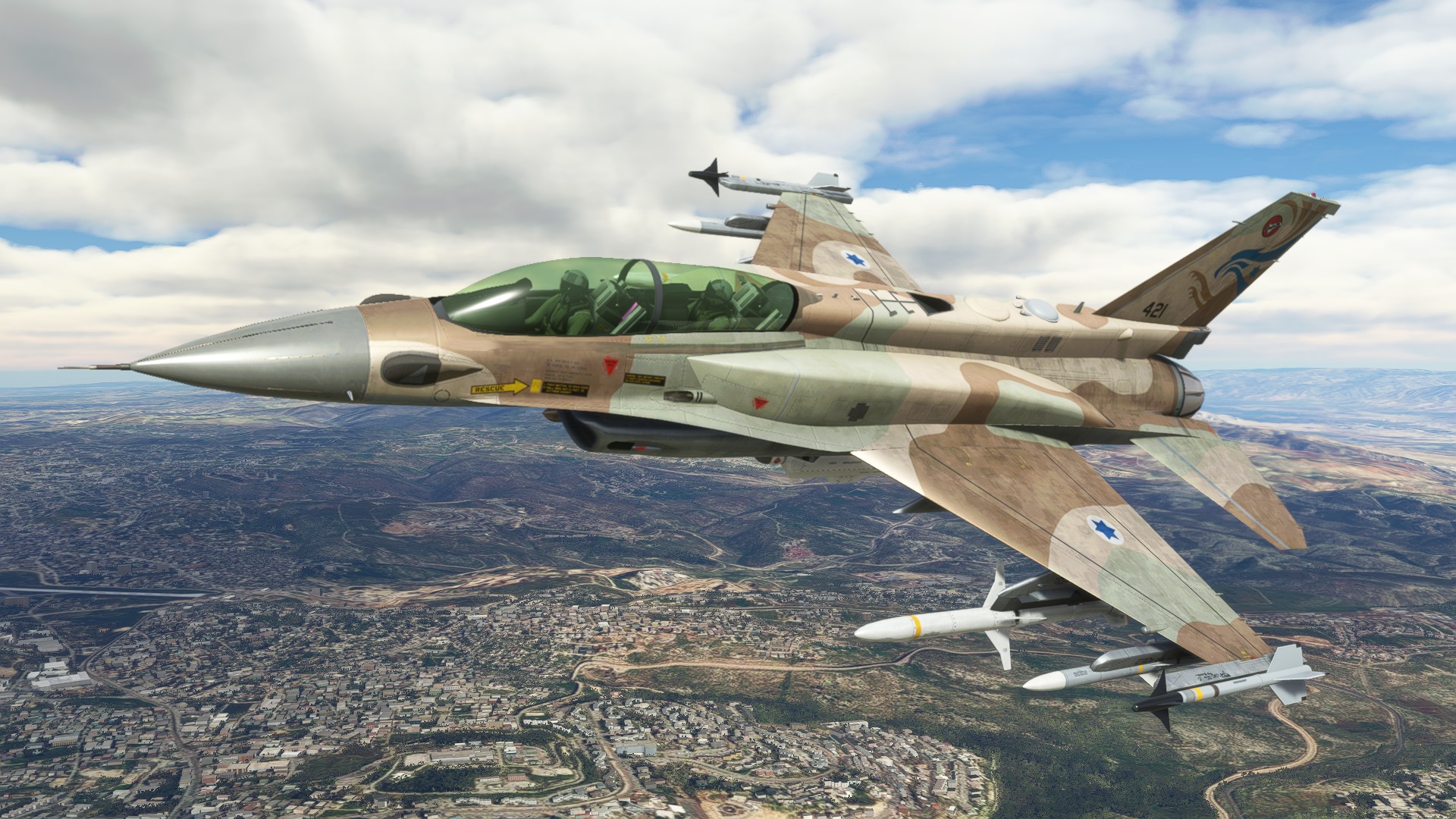 Third-party developers have shared a ton of news for Microsoft Flight Simulator today, including looks at upcoming aircraft and scenery add-ons.

SC Designs shared a development update with screenshots of its F-16 Fighting Falcon.

“Big news for all you Viper fans! After going through the many ( many! ) requests made by followers over the past few weeks, I have added a number of new features to the Fighting Falcons that should, I hope, keep most folks happy.The first addition is that of Conformal Fuel Tanks to all of the models, which are selectable via the Auxiliary fuel tanks setting in the in-sim payload menu. These CFTs will appear when filled with fuel, but will only vanish if manually set to 0 contents ( just like the wing tanks ) so they don’t disappear off the fuselage when fuel flow switches to internal tanks while in flight.

The second addition is the return of the IFF “box cutter” sensors on the Falcon’s nose. These are made visible via the IFF Selector switch in the cockpit, allowing the user to decide whether they appear or not on the fuselage. Although the Falcons are not modeled with particular blocks in mind, this option I feel does enhance the variety of the product a little further. The aircraft will also be coded to carry AMRAAM missiles on the wing-tips, as well as AIM-9s, as a few fans asked for this to be added.

Finally, the SC Designs F-16 Fighting Falcons package will now include the F-16I “Soufa”, the Israeli version of the aircraft. It will share the same twin-seat cockpit arrangement as the “D” version, but the exterior is notably different in a few ways in this export version, which mirrors other foreign operators operating similar F-16s, such as Singapore and Pakistan.

A few more paint schemes have been added, and the F-16s are now with Sim Acoustics having their custom sound packs created. Further additions will be customizable pilot helmets, faces, and flight suit patches, which will be added in the coming weeks to complete the package. I’ll be writing the manual in the meantime, while flight testing continues through November in the run-up to release, which I can now reveal will be with Just Flight in the first week of December 2021. The Marketplace and console version will follow soon after, but waiting times will depend on Microsoft’s team ( they’re currently some months behind schedule it seems ).

The F-16s will be priced the same as DC Designs’ F-14 Tomcats, at £24.99 ( $33 ) for all three aircraft, and the paint kit will of course be included at launch for those of you who love to create liveries ( the package will already come with at least ten liveries ).”

Next is DC Designs, with an update and images for the Concorde.

“Only two images this week from Concorde, but there is a good reason for that – this week the entire engineer’s panel has been re-modelled for higher realism and detail in MSFS. There is so much of it, it’s taken that long to work through it.

For those of you who don’t know, in the past I always modelled for performance over super-detail, as platforms such as FSX and Prepar3D struggled when things got “busy” and many high-fidelity airplanes caused users’ PCs to slow down under such conditions. With MSFS removing those problems, it’s time to crank up the detail, knowing that it won’t spoil the fun.

Some developers talk about entirely “re-modelling” their aircraft, but then just add some bells and whistles. In this case, everything you can see in the image that is light grey is entirely new. The FSX and Prepar3D Concorde that I built omitted a lot of the finer detail from the panels, including many switches and gauges, in order to maintain performance and keep the Concorde user-friendly. I don’t see any reason why everything should not now be there in its entirety, as MSFS can clearly handle it. I’ve used multiple reference images and books to study each individual panel, and then recreated it to scale – every switch, every button, every light and gauge is in its place. I still have to add all the bolts, screws and panel fasteners, reposition the text decals and add many more, and then add light visibility conditions. The entire panel will then be fully PBR textured at 4K resolution ready for animation.

Getting all this into place is actually important for more than just showing off – many of these instruments are needed for flight testing as we start working toward getting all of them actually doing something. Users of the Prepar3D version will know that, although not study-level, there was still a lot going on in Concorde’s cockpit on a supersonic trans-Atlantic flight, and the same will be true here, but more so. More of the controls will have a dedicated and functional purpose, and some will be essential in order for Concorde to perform as expected. I don’t want to stray too far from my remit of mid-level realism, but there’s only one Concorde so this is one of those cases where the detail is worthwhile.

Reading the manual will be a definite requirement for all users, whether on PC or console – it’s just the nature of the airplane itself. It cannot be simply taken off and blasted to 50,000ft and Mach 2 like an F-15 – it won’t do that ( as many users discovered in Prepar3D and FSX, and then complained that the airplane was “bugged” ). Like the real Concorde, if you don’t fly this one “right”, you won’t be able to fly it at all.”

We also hear from SimWorks Studios about the Daher Kodiak.

A short update on the Kodiak:
-A couple of things left to iron out in the graphics department, wheeled variants are complete.-We fell a bit behind schedule with the code and flight model. A few quirks remain to be ironed out.
– The plane will NOT be released before Sim Update 7: there will be changes to the flight model that may affect it, so we want to test it and tweak if needed before releasing
-Floatplane: Model completed, we are starting texture work. In the screenshot below you can get a look at the anti-slip surface at the top of the Aerocet 6650.
-Sounds done

We also hear from Flightbeam Studios. Not only did we get a new screenshot of Auckland Airport (NZAA) in New Zealand, but the release date has been announced.

SamScene3D announced two brand new city sceneries that will launch at the same time next month. While they weren’t mentioned by name, the skylines are immediately recognizable. The first screenshots below shows Pusan in South Korea, while the second portrays the capital of North Korea, Pyongyang.

SimArc continues its quest to improve Pakistan. While in this case no names were shared as well, the picture reveals the location. More specifically, the Arfa Software Technology Park tower indicates that we’re looking at Lahore.

Next is a video from Pacific Islands Simulations showing off Incheon International Airport (RKSI) serving the capital of South Korea, Seoul.

Last, but not least, Binersim also released a lot of new screenshots of Soekarno-Hatta International Airport (WIII) in Jakarta.