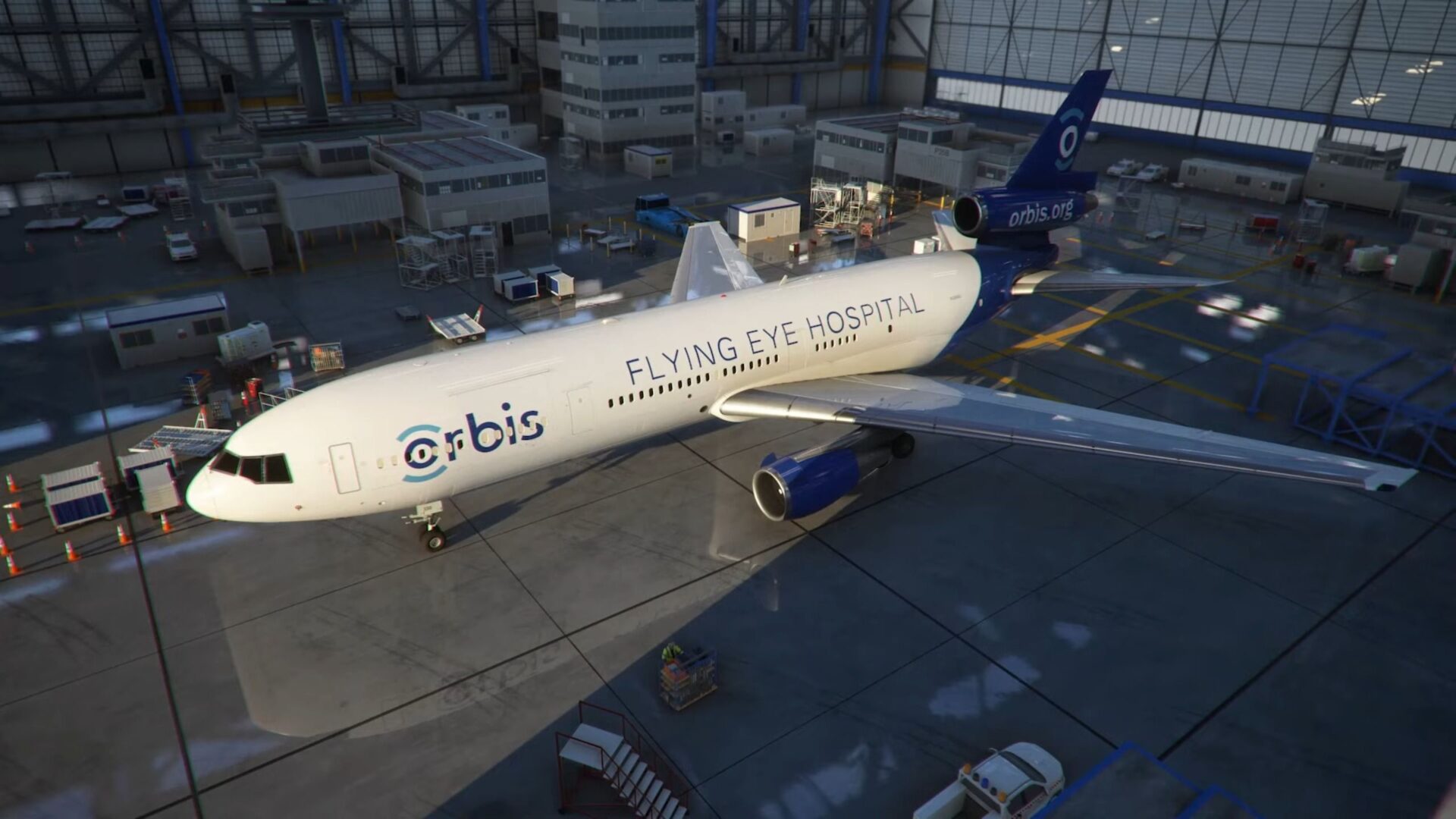 Today Microsoft is releasing something rather special in Microsoft Flight Simulator for free.

An add-on that will be released in the official marketplace of the simulator will add the MD-10 operated by Orbis International, a non-profit organization working on the treatment and prevention of blindness.

Said MD-10, christened the Flying Eye Hospital is a full-fledged teaching hospital that can travel around the world within the airframe of the veteran airliner.

Unfortunately, the MD-10 will be static and won’t be available for flight, but users will be able to visit it in its entirety. The package will also come to the Xbox version when it launches later this month.

Below you can check out a dedicated video, the full message by Microsoft, and another video released today about the simulator’s tech in general.

“We are delighted to announce today that we are partnering with Orbis International, a non-profit organization transforming lives through the treatment and prevention of avoidable blindness, to give flight simmers the chance to virtually explore the Orbis Flying Eye Hospital.

Orbis is making a profound impact on people’s lives and we’re proud to support their fight against avoidable blindness; a large but solvable problem that affects millions of people around the world who don’t have access to eyecare. According to the International Agency for the Prevention of Blindness there are 43 million people living with blindness, and 295 million with moderate-to-severe vision loss, 77% of which is completely avoidable.

We recognized an opportunity to raise awareness for Orbis’s cause by incorporating the Flying Eye Hospital into the Microsoft Flight Simulator experience.

Microsoft Flight Simulator users can tour the Flying Eye Hospital in full hospital mode with stunningly authentic detail and learn more about Orbis’s mission to train and inspire local teams to save sight in their communities by accessing the plane free-of-charge through an in-game news link or directly via Microsoft Flight Simulator Marketplace. The plane, however, is not currently available for flight.

The Orbis Flying Eye Hospital demonstrates how aviation can be a force for good in the world. Since their first generation DC-8 took off in 1982, the Orbis plane has flown to 97 countries to carry out sight saving programs. This third generation MD-10 that Microsoft Flight Simulator users can experience was donated by FedEx employees and launched in 2016.

The aviation sector first pioneered simulation technology; now Orbis and the wider medical community are fast adopting it. Just as simulation has been teaching pilots how to fly for decades, it is now helping doctors, anesthesiologists and nurses to save sight and improve patient care. On board the plane, Orbis uses simulation to teach and train eye care teams around the world – using virtual reality, artificial eyes and mannequins. Simulation has proven even more vital during a global pandemic as opportunities for hands-on training have decreased.

A passion for aviation and realistic simulation are the threads that tie Orbis and Microsoft Flight Simulator together, so we’re proud to showcase this unique aircraft.