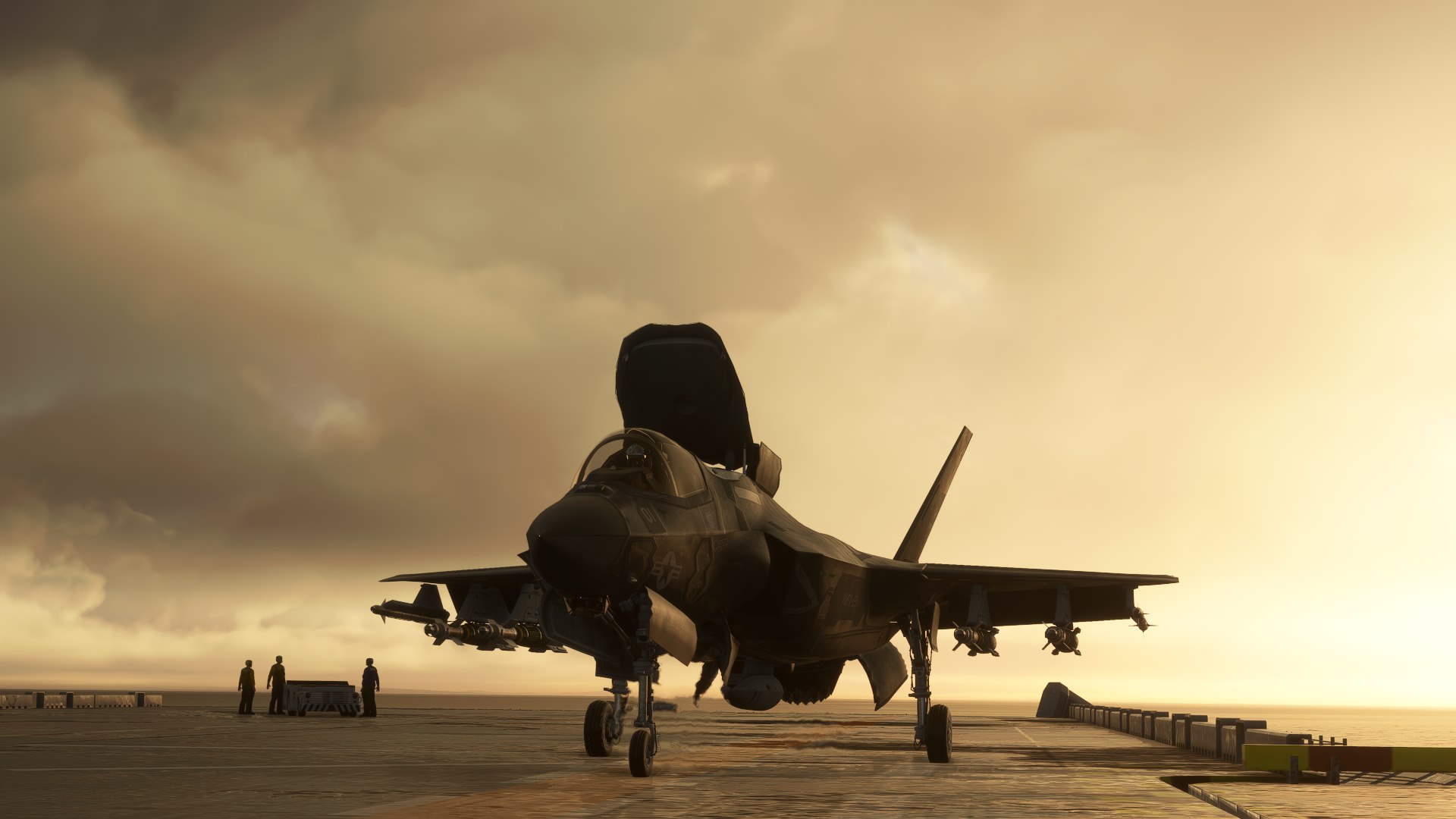 Third-party developers have revealed new assets about upcoming add-ons for Microsoft Flight Simulator and announced a new airport in the works.

First of all, we get new screenshots from IndiaFoxtEcho about the upcoming F-35 Lightning II, alongside a handy Q&A that should answer quite a few questions you may have.

Incidentally, we learn that the developer hopes to launch the aircraft for Xbox as well.

Q – ARE YOU DOING ALL THE THREE VERSIONS?
A – Yes. The package will include the three versions: A (CTOL), B (STOVL) and C (CATOBAR). All the significant differences will be modeled, including flight characteristics.

Q – CAN IT DO VERTICAL TAKEOFF AND LANDINGS?
A – Only the B variant does, and yes – STOVL is fully functional (unless Microsoft breaks it in the next update – fingers crossed), with realistic limitations (aircraft weight must be lower than 40000 lbs to hover). Note that while the F-35 can takeoff vertically, this is not the intended mission profile: it usually performs a short takeoff and then a vertical landing, as this allows a much higher payload.

Q – WILL IT BE AVAILABLE ON XBOX?
A – Yes, or at least we hope so. It is not clear, at the moment, if the Primary Control Display (PCD) will be controllable on Xbox in some cases. In any case it is likely that the XBOX version will be available slightly later than the PC version.

Q – WILL IT HAVE WEAPONS?
A – Microsoft DOES NOT allow depiction of weapons on planes sold on the Marketplace. The current plan is to have two version: the “pacifist” version will have no weapons and will be sold on the Microsoft Marketplace, the “non-pacifist” version will be sold by our usual distributors. At the moment we have AIM-9X, AIM-120, GBU-12, GBU-31, and gunpod. WEAPONS WILL BE COSMETIC ONLY AND CANNOT BE RELEASED (although technically speaking it is feasible to create droppable objects – this is currently beyond the scope of this project).

Q – IS THERE A WORKING RADAR? TFLIR? DAS?
A – No. At the moment these features are not included, mostly because MSFS does not include any way we know of for implementing them on XML code – and our PCD is partially based on the XML code we wrote for P3D.As a side note, in HTML5/JS and C++ it would be possible to:- create a working A-A radar- use the mapping service as a (rudimentary) A-S mapping radar – use the synthetic vision to generate (rudimentary) DAS/TFLIR images…but these are beyond the scope of the project.

Q – IS THE DRAG-CHUTE VARIANT INCLUDED?
A – No. Drag chute is installed on Norwegian aircraft upon a specific request from that country (and are easily recognizeable for a bump on top of the fuselage, near the engine nozzle). We’ll have a Norwegian livery, but that will be one of the first aircrafts delivered – with no drag chute.

Q – IS THE F-35I “ADIR” VARIANT INCLUDED?
A – The “Adir” is a specific variant developed for (and by) Israel – with nation-specific equipment and weapons. However the airframe is identical to the F-35A… so, you will find the Israeli livery in the F-35A folder.

Q -HOW CAN YOU GRANT ANY LEVEL OF REALISM ON THIS?
A – We cannot. However, we believe we did our homework and have been reserching every bit of unclassified information about the jet. And then there are a number of videos on Youtube that explain how to operate and fly the aircraft.

Q- WHERE DID YOU GET THAT U.S.S. AMERICA MODEL?
A – It is a static scenery object that is being developed for this project.

Q – HOW MUCH WILL IT COST?
A – Final price has not been set yet, but should not be too far from the T-45.Q – RELEASE DATE?A – It is done when it is done… but we are not too far from a decent build.

We also hear from Drzewiecki Design, which is giving the finishing touches to Warsaw Modlin Airport (EPMO) in Poland.

Last, but not least, Orbx is continuing with its series of Nordic airports. They just announced Sandane Airport, Anda (ENSD) in Norway.

It’s known for its iconic approach and it hosts scheduled Dash-8 flights operated by Widerøe.