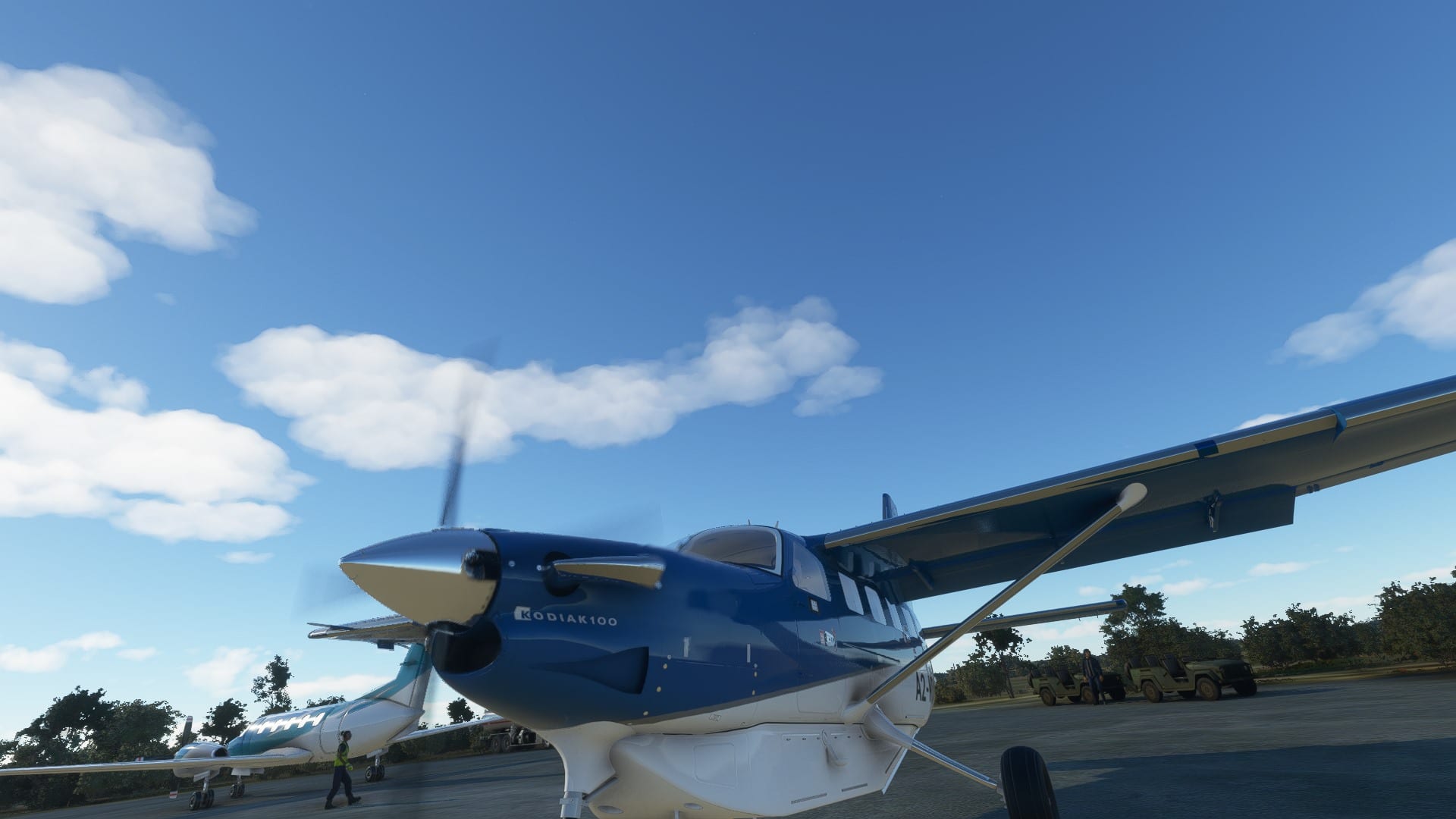 SimWorks Studios provided a development update for its Quest/Daher Kodiak, with new screenshots and information.

—EXTERIOR—
The exterior is nearing completion and we are putting the last few rivets on the airframe. The aircraft will ship with 25 factory schemes in three different layouts and will use MSFS’ tail number system. The standard and tundra tyre variants are fully animated and ready in the simulator including some custom animations that we will showcase later. The amphibian is currently in the paint shop and is expected next month.

—COCKPIT—
The cockpit is currently being modelled, with focus being on the cabin shell and cockpit. Once there, the aircraft interior will branch out to passenger, cargo and other variants.

—SYSTEMS—
This week we completed the integration of the Engine Display which will work with the default and Working Title G1000. Being a little more advanced, the WT version will feature the ENGINE, SYSTEM and FUEL screens. The displays are being built so that they will switch seamlessly whether you have the WT mod or not.
The electrical system is being connected to the cockpit, using the lessons learned on the new electrical system from other aircraft. While progress is made fast, this is at completely different level of complexity so we are treading carefully.

Finally, we are eagerly waiting for Sim Update 4 which brings a number of important fixes to turboprop engines.

Next, is Carenado, providing a new look at the Piper PA-34T Seneca V from Carenado.

Next comes a surprise announcement from IndiaFoxtEcho, that is working on a Revolution Mini-500 helicopter. Yes. A helicopter.

“As other developers have recently unveiled the release date for a similar product, we wanted to share with you some details about one of our “secret” projects: the Revolution Mini-500 helicopter.

We have been silently working in this for months as a research project which generated from our efforts in creating “external” flight models in Microsoft Flight Simulator – the idea being to become capable of creating arbitrary advanced flight models and potentially share them between different simulators.

Unknown to many users, it is possible in MSFS to write your own custom flight model (using C++) and override the MSFS flight model partially or completely (…and btw it is also possible to do that in most modern flight simulators).

We have starting experimenting with this in late December, and it was soon clear to us that we could try and build a proper helicopter. We have also involved experts in helicopter simulation in the development to create a “by-the-book” dynamic model.

We chose the Mini-500 (even if it is not a very popular model) for a number of reasons, but the main one was that we wanted to start with a very simple machine. Also, we have decided not to share details on this project so far mostly because -a the moment- it is a research project.

We have no release date so far, and actually, it is not even 100% granted we will be able to complete it, but it is been an extremely interesting learning experience….so, basically, the meaning of this post is “do not be too surprised in case indiafoxtecho releases a helicopter sometime in the future”.”

Last, but not least, the folks at the A34NX Project have revealed an early look at the fuselage of their Airbus A340 on their Discord server, promising pictures of the finished cockpit soon.

Moving on to scenery, Orbx had another surprise announcement, Elstree Aerodrome (EGTR) in the UK.

Elstree Aerodrome for Microsoft Flight Simulator takes you to one of the foremost general aviation airfields in England.

A general aviator’s delight and uniquely placed for fast access into London, this Aerodrome started out in the 1930s as a small landing strip, and came into its own during World War II when it was used for the overhaul and repair of military aircraft.

You will be completely immersed in the scenery here, with highly detailed and accurate models based directly from on-location photography bringing the rustic charm of this airport to life.

Last, but not least, a trailer has been released for Flight Sim Development Group’ Rhodes scenery, which was released earlier this week.