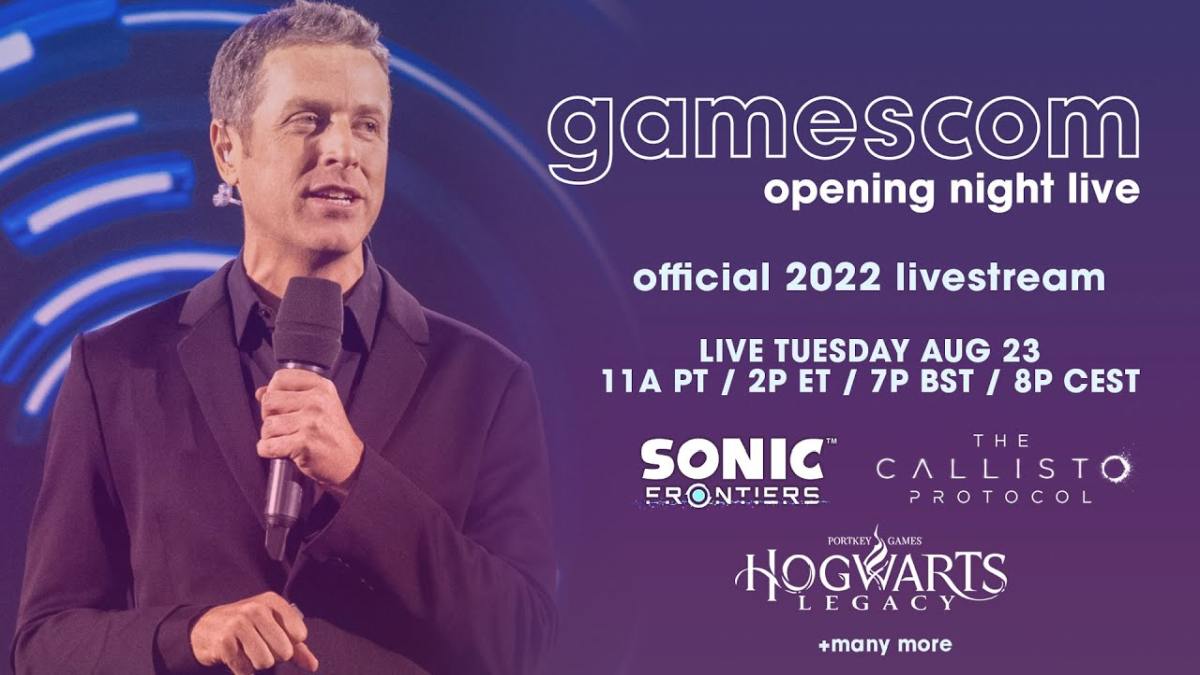 Below you can find all the news and trailers shown off during Gamescom Opening Night Live 2022.

As the description on the official website reads, the game will “seamlessly blends gameplay, adventure, creativity and discovery in an all-new multi-world gaming experience that redefines how players connect with one another and with the digital world around them.”

Everywhere is set for a 2023 release on currently unannounced platforms.

Dune: Awakening will be a survival MMO akin to something like Conan Exiles, but set on the dangerous planet of Arakis.

Awakening will task players with building shelter to avoid sandstorms, fighting off the massive sandworms and maintaining their stillsuits. Players will also be tasked with scavenging long-forgotten biological testing stations for equipment and create their own character as they will set out to survive the desert world of Arakis.

New gameplay was shown off for the upcoming game The Callisto Protocol. The game will be out on Dec. 2 for PS5, PS4, Xbox Series X|S, Xbox One, and PC.

The Lords of the Fallen

A brand new trailer dropped for The Lords of the Fallen, a sequel to the game that came out eight years ago from CI Games. While there wasn’t any gameplay, the trailer is set to the song Mother by Danzig which provides some great atmosphere.

No release date is known, but The Lords of the Fallen will launch for PS5, Xbox Series X|S, and PC.

The game all about owning a moving company with your friends is back with a sequel, Moving Out 2. It seems this time around players will get the opportunity to play online with friends, as the first game was only couch co-op.

The new trailer for Hogwarts Legacy shows off some of the choices involved with choosing to be friends with Slytherin student Sebastian Sallow.

After a delay, Hogwarts Legacy will be out on Feb. 10 for PS4, PS5, Xbox One, Xbox Series X|S, PC, and Nintendo Switch.

New Tales from the Borderlands

New Tales from the Borderlands was announced and will feature an entirely new cast taking on Tediore CEOs.

Tales from the Borderlands will be out on Oct. 21 for PS4, PS5, Xbox One, Xbox Series X|S, Nintendo Switch, and PC.

The first story DLC for Dying Light 2 was announced. It has a very Thunderdome feeling to it, so be prepared for some arena combat.

Customize your ship and set sail in this title that looks to be part tactical RPG. No release date given but it will come out on PS5, PS4, Xbox One, Xbox Series X|S, and PC.

Marauders seems to have the same gameplay loop as Escape from Tarkov with players searching for loot and then having to attempt an escape with it. This trailer promises the game will enter into early access in October.

Lightfall will be the next Destiny 2 expansion players can get their hands on.

The new Sonic Frontiers trailer that premiered during Opening Light Live finally gave a release date for the game of Nov. 8.

Under the Waves features Stan, a diver stuck in the cold isolation of the ocean.

The game prompts players to explore the sea in a “poetic underwater adventure about the engulfing power of grief.”

The best game around about being a goat got a new gameplay trailer showing off how much things have changed (but also no) in Goat Simulator 3.

Players can expect Goat Simulator 3 on Nov. 17 for PS5, Xbox Series X|S, and PC as an Epic Games Store exclusive.

This new trailer finally gave a release date. Players will be able to play Return to Monkey Island on Sept. 19.

Return to Monkey Island will be available on Nintendo Switch and PC.

Moonbreaker comes from the mind of author Brandon Sanderson and is developed by Unknown Worlds (Subnautica). The game was described on stage at Gamescom Opening Night Live as “XCOM meets Hearthstone.”

Moonbreaker will be arriving on Steam early access on Sept. 29.

Friends vs Friends appears to be a multiplayer FPS that is also card-based. There is currently no official release date, and Steam describes it as:

Play 1v1 or 2v2 in online, fast-paced, chaotic combat! Level up, get new cards, improve the ones you already have, and unlock new characters with their own unique skill. No microtransactions for progression. EVER!

The trailer doesn’t give any idea on platforms outside of just saying “PC and consoles”.

Lies of P is an upcoming Souls-like that is heavily inspired by the story of Pinocchio. As a matter of fact, Lies of P looks as though it was also inspired by Bloodborne.

No official release date has been revealed yet, but we do know the game will be coming to PS5, Xbox Series X|S, and PC sometime in 2023.

Steam describes the game as:

Brave a new world in Stranded: Alien Dawn, a planet survival sim placing the fate of a small marooned group in your hands. Forge your story through compelling and immersive strategic gameplay as you make vital decisions to protect your survivors from starvation, disease, extreme weather and more. From basic camps to fortified bases, create a stronghold to defend the survivors from attacks by alien creatures that roam an expansive and deadly alien world. Experience an epic and unpredictable journey.

Atlas Fallen will take players to a semi-open world full of ancient mysteries and threats, as hulking threats stand in the way of your quest to learn more, and eventually, bring down the gods.

Homeworld 3 showed off some of the Kesura Oasis gameplay.

Homeworld 3 will be released on PC sometime in 2023.

The big highlight from this trailer about the new location Sumeru is a look at the upcoming character Tighnari.

Sumeru will be coming to Genshin Impact tomorrow, Aug. 24 as a part of version 3.0.

Honkai: Star Rail is the next game from miHoYo, the publisher/developer behind Genshin Impact. This new trailer is a look at the characters of the game.

We got to take a look at Honkai: Star Rail during the Closed Beta earlier this year. While it doesn’t currently have a release date, we do know it will be coming to PC and mobile devices.

This new High on Life gameplay trailer gives us a good look at combat with a talking gun in a boss fight.

Set in a future where humanity has been taken over by alien cartels, players assume the role of a bounty hunter who sets out on an adventure to free humanity.

High on Life will be an Xbox exclusive and will release onto Game Pass.

New trailer for Hardspace: Shipbreaker gave a release date for both PS5 and Xbox Series X|S. The game will hit consoles on Sept. 20.

The trailer describes the game as: “the ultimate zero-g space salvaging sim.”

The Expanse: A Telltale Series

This new trailer gave a look at the behind-the-scenes of the game that is reviving Telltale Games.

The Expanse: A Telltale Series will be released on Playstation 4, Xbox One, and PC in Summer 2023. It is likely next-gen versions will be announced, but that remains to be seen

The craziest thing to come out of Gamescom Opening Night is Killer Klowns From Outer Space: The Game, the video game adaptation of an 80’s movie that probably no one watching the stream really remembered or knew existed. It will be releasing on PS5, PS4, Xbox Series X|S, Xbox One, and PC.

The trailer description describes the game as:

Plan your own alien invasion and harvest humans as the iconic Killer Klowns, or gather a team of survivors to fight the extraterrestrial threat, in a game based on the ‘80s cult classic movie. Welcome to a new, craazzy take on the asymmetrical multiplayer horror experience

Scars Above is a third-person shooter where a lone protagonist has to survive a dark, sci-fi world. The story trailer reveals that a mysterious structure has suddenly appeared in the sky above the earth’s atmosphere answering humanity’s question of life on other planets.

Wyrdsong comes from Something Wicked Games, a studio founded by some big industry veterans. While the trailer doesn’t give much away, it does look to be promising.

A new trailer gave details on the Ottomans and Malians added in the anniversary update.

The Anniversary Update will be released on Oct. 25.

This Villains Trailer for Gotham Knights served two purposes. On one hand, we got to see Harley Quinn. But also, the trailer showed that the release date has been moved forward to Oct. 21.

Developed by Everstone Games, Where Winds Meet looks to marry open-world RPG and martial arts while taking players to the Northern Song Dynasty time period. Combat looks fast-paced and hectic as players will be tested to the limits with overcoming a variety of foes. The trailer also gives a look at some open-world segments with the protagonist boasting superior movement skills such as wall-running and even running on water.

Where Winds Meet doesn’t reveal a release date or platforms.

Park Beyond shows to be the next evolution in theme park simulators.

The new MINI Aceman is a concept that is designed to be playful, and it includes “Pokemon Mode,” which features designs surrounding Pikachu. It’s a match made in heaven since Pikachu is an Electric-type, just like how the car is electric.

This Warhammer 40,000: Darktide trailer gives a look at character customization. The game will be out on Nov. 30 for Xbox Series X|S and PC.

The trailer description explains that Blacktail is:

A surreal first-person action adventure game, where the story of Baba Yaga comes to life. Explore an original take on Slavic folklore and forge your own legend. Become either the guardian of the woods, or the terror nightmares are made of.

Blacktail will be “available this Winter” on PS5, Xbox Series X|S, and PC.

We got a press release for Phantom Hellcat, and it summarizes the game as:

Break a leg as Jolene, a rebellious young woman who makes the grave mistake of breaking the seal upon a cursed theater filled with dangerous dimensions full of pompous props. The theater’s seal holding back the darkness weakens until the evil trapped within takes Jolene’s mother hostage. Soon, twisted stories of humanity will begin to escape and wreak havoc upon the world.

The Babylon update to CrossfireX is available right now and is the game’s biggest content update yet.

This trailer is to announce that Dorfromantik is coming to Nintendo Switch on Sept. 29.

The Outlast Trials will be getting closed beta from Oct. 28 to Nov. 1.

This extremely brief trailer is for The Finals, some sort of FPS gameshow game.

After all these years, Dead Island 2 is finally happening. You can expect it to release on Feb. 3, 2023.

That cinematic trailer wasn’t the only treat the waiting Dead Island 2 fans got, either. A gameplay trailer was also shown off with plenty of zombie slashing action.