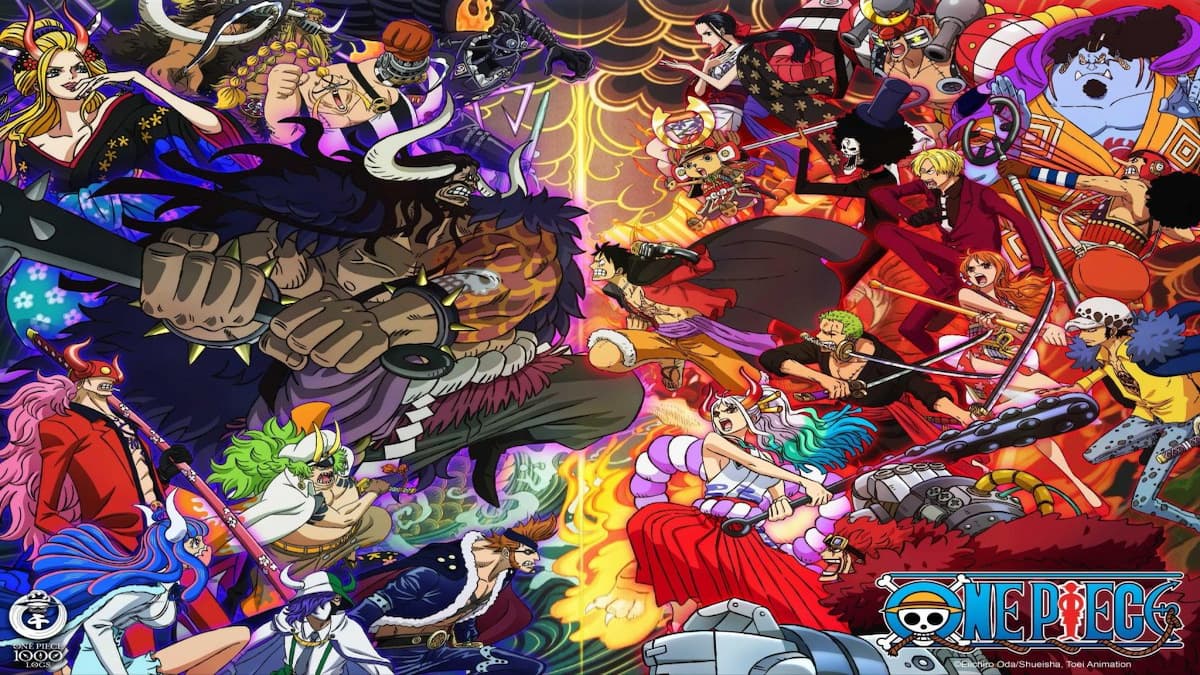 Out of all the genres within anime, action adventures are one of the most popular in the community. Unfortunately, since there is such an extensive amount of shows featuring this type of narrative, it may be challenging to choose the right one for you to start with. But don’t worry; we’ve got you covered with this list of the best action anime you need to watch.

The courageous misfits in the Fairy Tail guild often face terrifying dangers in the mystical world of Earth Land. The team includes Natsu Dragneel, Gray Fullbuster, Erza Scarlet, and Lucy Heartfilia as they battle against dark magic and demons created by Zeref, the evilest and strongest mage.

Fans of the series have continuously boasted about the show’s heart-pounding fight scenes, with some even making video compilations to highlight the best ones. So, whether you are watching the anime or playing the Fairy Tail game, the profound battles and story arcs will undoubtedly immerse you into this magical universe.

The action-packed journey of Dragon Ball Z is full of vigorous fight scenes and intense training arcs. In fact, the anime is most notably known for its lengthy storylines that draw out battles across multiple episodes. For instance, the fight between Goku and Frieza spans a total of 19 episodes, along with many others that feature extensive combat narratives.

The anime’s fighting scenes have even transferred into the video game industry, such as major titles like Dragon Ball Z Kakarot and Dragon Ball Xenoverse 2. But, with all of its multiple shows, movies, and video games, fans still can’t get enough of their favorite Super Saiyan heroes.

Everyone loves an underdog story, and Izuku Midoriya is the perfect embodiment of this classic trope. You’ll watch as he grows to become the greatest hero in the world of My Hero Academia, where the powers of villains threaten humanity. Additionally, the students must participate in tournaments, grueling training, and exciting trials to become strong enough to fight this evil.

Besides Midoriya, we also watch other amazing heroes and students of the academy. For example, Katsuki Bakugo’s Quirk allows him to acquire the power of fire through his explosive abilities, while Ochaco Uraraka’s Zero Gravity can make any object float. Since the show features many different arcs, we can help beginners with our guide on how to watch the anime in order.

Jujutsu Kaisen maintains its popularity because of its detailed combat-heavy scenes and unique characters. The story of Yuji Itadori is genuinely remarkable, especially when he continues to fight despite being a newcomer in this demon world. In addition, the students of Tokyo Jujutsu High display a diverse set of powers and fighting styles that can withstand the most formidable foes.

The latest installment of the series, Jujutsu Kaisen 0, has become one of the highest-grossing anime movies of all time. This highly-regarded prequel is known for its gory violence and epic musical score, and we can’t wait to see more of what happens in the next storyline.

Now, if you want an anime with humor and action, then One Punch Man is the best show for you. Embark on a journey with Saitama, the strongest person in the world, while he searches for a worthy opponent. The anime is incredibly original since it makes fun of typical hero characters. For example, Saitama exhibits an egg-shaped head appearance instead of a cool-looking hero like in most shows.

Even if some fights are brief (due to Saitama’s strength), we, as an audience, know he will always be there to save the day. In addition, other notable characters are still around for the fight, including Genos, Tornado of Terror, and everyone’s favorite C-Class Hero, Mumen Rider. On top of that, those who want more from the anime can play One Punch Man: A Hero Nobody Knows.

Joining this list of the best action anime is Akame Ga Kill! where the famous Night Raid plots to overthrow the greedy Prime Minister Honest. While on this mission, the assassins must live through petrifying dangers and violent clashes between good and evil. Not only will you grow to love the main character, Tatsumi, but you will also root for the remaining group members, like Leone, Bulat, and Akame.

Each assassin masters their fighting style and is worthy of going against incredible odds. Once you begin this heart-wrenching journey, you won’t want to stop until you reach the anime’s monumental ending.

Demon Slayer thrives in the anime community with its fluid movements, colorful battle scenes, and diverse cast. The main character, Tanjiro Kamado, uses his mind to act quickly in fights where he doesn’t stand a chance, while his sister, Nezuko, possesses demon powers that prove valuable in each arc. As Demon Slayers, they must eliminate fearsome creatures that can regenerate. Fortunately, the two aren’t in this fight alone and meet fellow soldiers like Hashibira Inosuke and Zenitsu Agatsuma.

There’s a reason why Demon Slayer: Mugen Train is the highest-grossing anime movie, and that’s precisely because of its extraordinary artwork and compelling storytelling throughout the film. Luckily, fans who want to test their demon-slaying abilities can play featured games from the anime, including Demon Slayer: Kimetsu no Yaiba – The Hinokami Chronicles.

Once you hear the funky bass and epic trumpets of Cowboy Bebop’s opening, you know you’re in for a thrilling space adventure. This anime classic has action moments that are out of this world with a cast of characters willing to risk it all. You’ll experience the life of members aboard the Bebop, including Spike Spiegel, Jet Black, Faye Valentine, Edward Wong, and the beloved Ein.

Cowboy Bebop’s success was able to gain enough traction to gain its very own Netflix live-action adaptation. So now fans can see its incredible fights, iconic scenes, and the mysterious ending in these two different versions.

Bleach is an anime known for its fantastic and intricate battles. After Ichigo Kurosaki takes up the mantle of the Soul Reaper, he begins a treacherous journey where he must defeat corrupted human souls, also known as Hollows. As he gets accustomed to his new life, Ichigo learns that his classmates, Orihime Inoue, Yasutora Sado, and Uryuu Ishida, also possess supernatural elements to help him in this adventure.

Because the show never received a proper ending, fans are definitely excited for Bleach’s return in Oct. 2022. While we anticipate its release, we only hope this last season will finally bring some closure to this magnificent tale.

Have you ever dreamt of becoming a ninja? Then, you’ll undoubtedly want to watch Naruto Shippuden, one of the best action anime. The main character, Naruto Uzumaki, may still be a kid at heart, but he has grown because of his determination to protect his friends and family. To do this, he must become stronger to eliminate the threat of the Akatsuki organization.

Even if the adventurous story of Naruto Shippuden has ended, fans can continue the journey with Naruto’s son, Boruto. Not only will you experience the life of an all-new shinobi, but you will also see returning characters like Naruto, Sakura Haruno, and Kakashi Hatake.

Castlevania’s animated version dives you into a scary medieval world inspired by the previous works within the video game. As a monster hunter, Trevor Belmont seeks to save the city from dreadful creatures controlled by Dracula. In addition, this show gained popularity due to its combat-heavy and frightful moments throughout the story.

Due to the anime’s darker tone, the show received an R-rating because of its violent scenes and use of vulgar words. So, if you enjoy more mature content, this show is perfect for you. You can also expect more of the anime with the upcoming release of Castlevania: Nocturne.

Full Metal Alchemist: Brotherhood tells the story of Edward and Alphonse Elric while searching for a cure to restore their bodies. Their lives dramatically change once they try to resurrect their mother, resulting in Edward losing his limbs and Alphonse’s transformation into a suit of armor. As they set out on this mission, they often find themselves in dangerous situations where they must fight to survive.

Those who want to continue the action-packed journey of the anime can look forward to Square Enix’s FullMetal Alchemist mobile game. This latest arrival allows players to immerse themselves into the anime’s story in the comfort of their homes or on the go.

From the very first episode, Attack on Titan makes its mark as one of the best action anime. Every fight scene against Titans and certain foes always features a vast amount of gore and strategized plans to go against unbearable odds. Furthermore, Eren Yeager and the rest of the Scout Regiment must live through each battle that brings them closer and closer to death.

Whether you have stuck around since the story’s beginning or have just started the anime, you can witness the end of the journey when Part 3 of the Final Season releases. While we patiently wait, we can stay tuned for Dead by Daylight’s crossover with Attack on Titan.

If you haven’t heard of the popular anime, One Piece, you certainly must be living under a rock. As one of the longest animated shows, this pirate adventure features great story arcs with exciting fighting scenes. Of course, everyone knows the famous main protagonist, Monkey D. Luffy, and the other notable members of the Straw Hat Pirates.

Alongside the celebration of the anime’s 1000th episode is the exciting release of One Piece Odyssey. Longtime fans and newcomers will now have the opportunity to play as the well-known pirate in this exciting JRPG.

Last but certainly not least is Hunter x Hunter, an anime widely known for the best action scenes. The diverse set of characters, like Gon Freecss and Killua Zoldyck, each have unique abilities and fighting styles. Furthermore, every arc explores new storylines different from the others, where Gon and Killua clash against creatures and enemies to become stronger.

Both the heroes and villains of the anime are exciting to watch, and sometimes you may even root for the bad guys to win. A few characters have also made it onto the Jump Force roster, including the main antagonist, Meruem, and the powerful Kurapika. With talks of the popular anime returning, we hope to see more Hunter x Hunter content in the future.

Now that you’ve seen this list of incredible action anime that’ll knock you out, we hope you find one that is the best for you. If there’s one show we have possibly left out, don’t hesitate to voice your opinion in the comments below. Since there will be more action anime in the future, we look forward to embarking on new adventures.