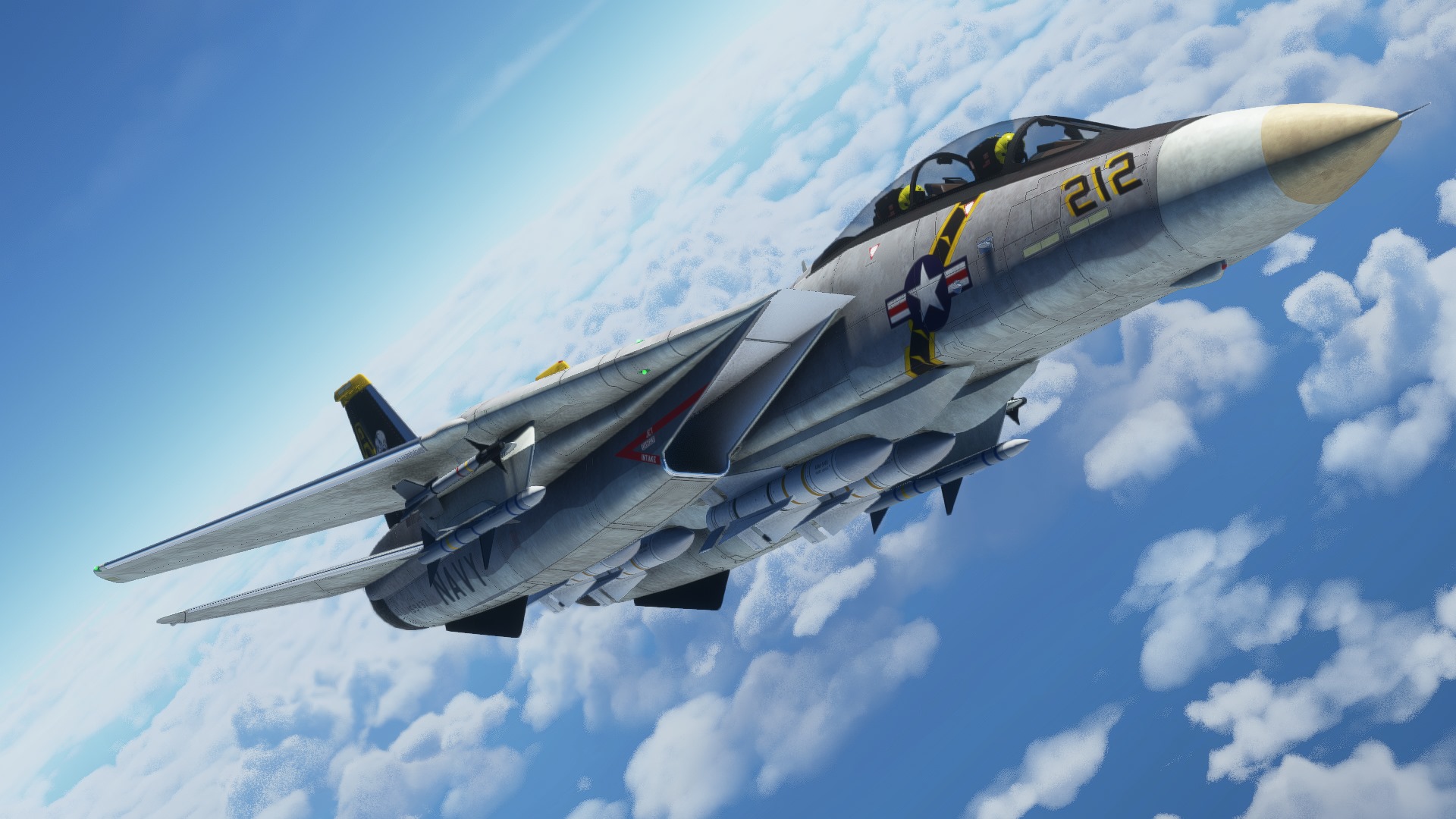 Starting with airports, we get a look at the new rendition of Halifax Stanfield International Airport (CYHZ) in the works at FSimStudios and Airfield Canada.

This is coming soon, before the end of June.

Next, Just flight revealed new images of the PA-28 Warrior II with a brief development update.

“Model, texture and custom coding work is nearly complete on our upcoming PA28 Warrior II for MSFS, with flight dynamics and custom sounds well underway too!”

last, but not least, we get a much larger development update from DC Designs, alongside new screenshots of the F-14 Tomcat, which should come by July.

“The Tomcat has been progressing extremely well this week, as work has started on the deeper-level detail that I want to see in this aircraft. The work so far has focused on the aircraft’s engines and control surfaces: the F-14 had a complex arrangement of flaps, slats, spoilerons, tailerons and spoilers. All of these surfaces worked together with the variable-geometry wings throughout the flight envelope to provide the Tomcat with the high-lift generation that allowed it to loiter for long periods on combat air patrol, conduct supersonic intercepts of intruders, and then stay in the fight with aircraft that were literally half its size and weight.

Currently, the aircraft is equipped with four-stage flaps, along with two-stage slats, which can operate both under the pilot’s command but also automatically at certain airspeeds to retain lift during air combat manoeuvring. In addition, these are supplemented by spoilerons that deploy to enhance roll-rate at combat airspeeds, while the flaps ( which can also deploy during high-G, high-alpha manoeuvres, are coded to be inoperable when the wings reach beyond certain angles of sweep.

The wings sweep automatically based on Mach when airborne, but can be over-ridden by the manual sweep control as per the real aircraft. Pitch-trim was barely affected by the wing sweep in the real aircraft, I was surprised to learn, so we’ve elected to leave pitch likewise unaffected in this rendition of the aircraft as far as elevator trim is concerned.

The F-14A was powered by two Pratt & Whitney TF-30 afterburning turbofans that were not really right for the aircraft. The engines were vulnerable to compressor stalls in certain phases of flight, and I’m delighted to report that these vulnerabilities have now been coded into the DC Designs F-14 engines. If the Tomcat is below 250 knots indicated and the pilot is too heavy with the rudder in either direction, the inside-turn engine will suffer a compressor stall. Do this in the landing phase and you’re quickly going to find yourself in deep kim-chi. Fortunately, for those quick with their stick and rudder, the Tomcat can fly on one engine. If you have the fuel, and can re-gain altitude, the dead engine can be re-started. The flight tests for this process so far conducted on the Tomcat revealed a both-engines-out glide speed of 250 knots with a seven-degree nose-down attitude, yielding a descent rate of around 2,500ft per minute – not long to get those engines going if you’re at lower levels.

Further quirks of the engine that can risk low-level stalls are; improper use or failure to use inlet ramps, lateral side-slip maneuvers with high roll rates when supersonic, and certain high AoA maneuvers. To put it simply, the A model represents a fairly detailed rendition of the aircraft’s flight and powerplant characteristics and will require more careful handling than other MSFS fighter jets to get the best out of it. Despite all of this the real F-14A was, in the right hands, capable of defeating F-15s, F-18s, and even the F-16 Viper in close air-combat maneuvering, so don’t complain – learn to fly the aircraft…The F-14B was powered by a pair of General Electric F110 engines that did not suffer compressor stalls and were more powerful, producing 30% more thrust across most of the flight envelope. These changes are also reflected in the DC Designs F-14B model, however for the time being we’re testing only the A and then will move on to the B, as the rest of the aerodynamics were identical.

Flight tests have shown that when the aircraft is pitched into high-alpha flight with high-rudder and/or aileron inputs, the F-14 will depart controlled flight, with a tendency to deep-stall the airframe. Spins have been conducted both flat and inverted, both of which display increased violence as altitude is lost. The recovery procedure so far is to get the nose down and attempt to keep it there until airspeed recovers ( above 115 knots indicated ) at which point limited control authority is regained. These stall and spin aerodynamic characteristics unfortunately coincide closely with the TF-30’s compressor stall vulnerability, so just like real life the pilot will have to keep a careful eye on airspeed and AOA during air-combat-manoeuvring if they’re to avoid a compressor stall and simultaneous spin departure, as the asymmetric thrust from only one engine turning could render the spin unrecoverable.

The F-14 is fairly easy to land but as with any large and heavy aircraft, turns in the landing configuration must be handled with care to prevent rapid side-slip events. At low weights the Tomcat’s stall speeds are also remarkably low, probably due to the large lifting area of the fuselage, but at normal operating weights it can be all too easy for the big cat to get out of control – just the way it should be! It’s become easy to see in testing how some Tomcats were lost when trying to line up with an aircraft carrier – low speed, high alpha, a boot of rudder to avoid going wide in the turn and suddenly one engine’s shutting down and the pilot only has 350ft of altitude to play with and seconds to react. With the coming aircraft carrier to MSFS, you’re about to bear witness to what it was really like to be a Tomcat pilot in the United States Navy”