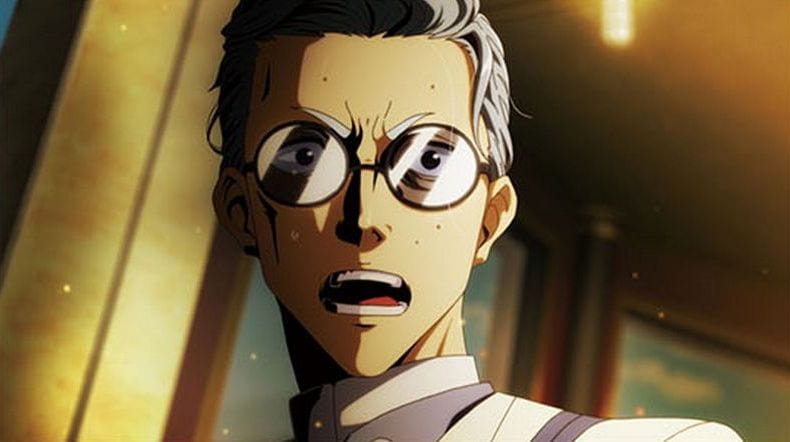 First of all, we get to meet a few new characters.

“President G” is the head of the WLOF, the organization that rules over the worldwide competition among revues. Everything about him (including his real name and nationality) is a mystery.

“Mister I” is his right hand man and leader of the WLOF’s men in black, in charge of intelligence. His word is President G’s word.

We also see their airship, which is the embodiment of President G’s power.

Hinata Amamiya is Sakura’s mother, deceased when she was 27. Sakura has inherited her bright and positive attitude, and the sword she wields is a memento from her.

Tekkan Amamiya is Sakura’s father, currently 42 years old. He is a blacksmith with a quiet attitude even if his work is famous and reliable.

Yattansai Mochizuki is the head of the village that serves as a base of the Mochizuki-style Ninja. He took care of Asami and taiught her the 108 rules that govern the village.

We then move on to the rules of the World Floral Revue Championship which playes a central role in the story of the game.

Each match is a 3 vs. 3 bout, so the player can choose who to send into battle depending on abilities and personal preference.

By destroying enemy targets, you can earn points pushing a “tug-of-war” gauge at the top of the screen. The team that wins two rounds wins the match.

It’s worth mentioning that the opposing teams also fights on the same map, so it’s possible to disturb their performance.

Enemy targets appear in various areas of the map and disappear after a while. It’s important to reach them before the opposing team to score more points, but targets can also appear in multiple places at the same time.

Some targets have different colors, and yield bonus points. Fighting efficiently is the secret to victory.

Even during the tournament battle story events will happen and will progress the narration. Players can enjoy various interaction with the heroines and members of rival revues.

If you’d like to learn more about Project Sakura Wars, you can enjoy the previous batch of screenshots focusing on romance, another reveal with two new characters and videos, the beautiful anime opening cutscene, a music video dedicated to Sakura, one featuring Hatsuho one focusing on Elise, one showcasing Lancelot, one featuring Anastasia Palma, another starring Huang Yui, one showing Claris, more trailers, the latest gameplay, latest gallery of screenshots, another gallery, the previous gameplay reveal, another one, and an earlier gallery of screenshots and art.