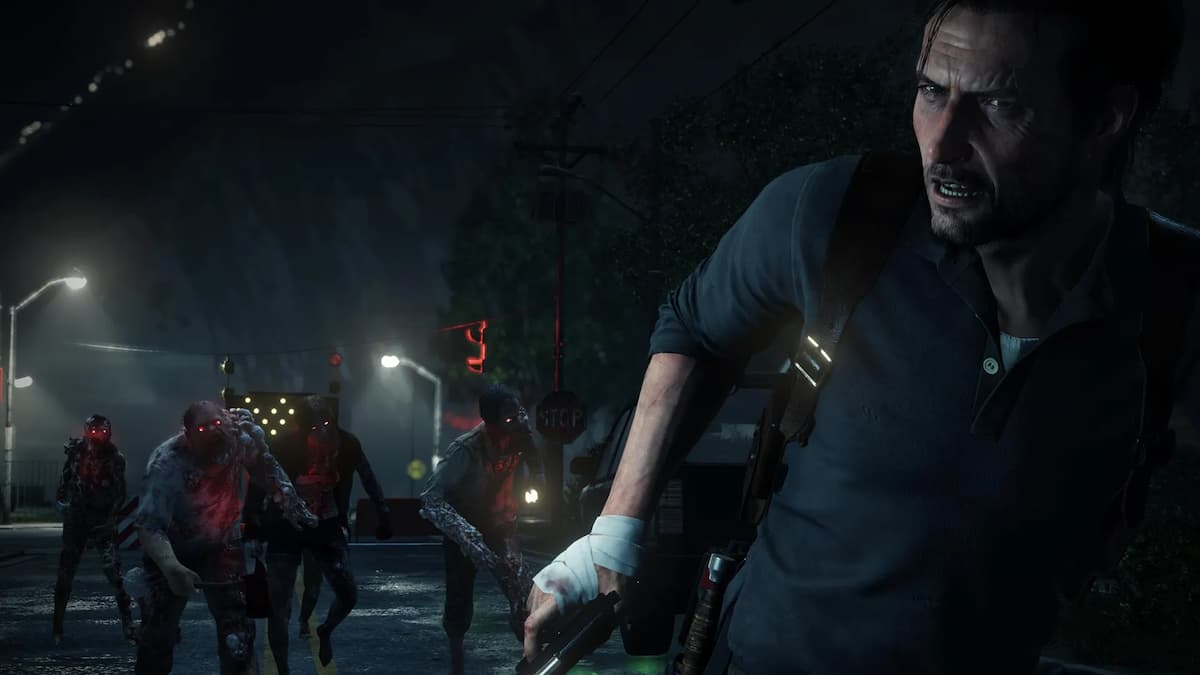 Little Nightmares 2 is the sequel to one of 2017’s indie gems, but you don’t need to have played the original to enjoy every spooky moment of the latest game. This 2.5D horror adventure takes you through the nightmares of a young child caught in a terrifying and strange world that snatches at her heels around every corner, and it’s absolutely one of the best horror games on PC.

The gameplay revolves around puzzles and evasion rather than combat, and it’s simple stuff for the most part in terms of control input, but the tension of the chase scenes still absolutely gets the blood flowing. Perhaps the most impressive aspect of Little Nightmares 2, though, is the way in which the graphics, music, and SFX come together to create a tense, frightening atmosphere that is uniquely unsettling.

From the developers behind Layers of Fear, Observer is a brilliant horror adventure game set in a bleak, cyberpunk dystopia. You’re tasked with wandering around an apartment complex trying to piece together a murder mystery but it quickly becomes apparent that something truly disturbing is going on.

The story is wonderfully eerie and evokes curiosity to keep you pushing forward, and it’s only actually halfway through you realize that things are taking a frightening turn from a film noir-esque detective story to a terrifying slasher. Observer recently got a next-generation update so it’s a perfect time to play if you haven’t already.

You can read more about Twinfinite’s impressions of Observer in our review.

The Dead Space series is among the most terrifying ever made, and one of the few survival horror franchises that really expanded on the blueprint laid down by the Resident Evil games of the late 1990s and early 2000s. The sequel, Dead Space 2, is the best of the bunch, improving on the first game without going too overboard on action as did the third game.

In Dead Space you take control of Isaac Clarke as he navigates yet another eerie abandoned space station full of hideous Necromorph mutants. These creatures are actually infected human corpses who can only be defeated by dismembering their gangly limbs, which forms the basis of the combat in the game. Blowing off their legs and arms as they scream toward you out of the darkness in Dead Space’s final moments is just as harrowing as the very first time you come face to face with one… and they’re just the basic enemy types!

Capcom’s remaking and re-releasing of Resident Evil games has become a signature in recent years, but the second game is absolutely the high watermark so far — arguably, not just of the remakes but the entire franchise. Resident Evil 2: Remake is an absolute masterpiece, near perfectly modernizing a survival horror experience that many consider the genre’s very best.

The Remake takes the iconic Raccoon City Police Station and Umbrella, and freshens it with cutting-edge graphics that look exceptional on PC. The survival horror gameplay is even more captivating with a modern, over-the-shoulder third-person perspective similar to RE4, this time with a better camera and enhanced gunplay. Elements of the story and characters have also been modernized and revamped in a way that feels respectful of the original but fresh and exciting. A must-play horror game.

As survival horror games increasingly lean on modern graphics to produce frighteningly realistic gameplay, it’s refreshing to find one that instead goes back to basics. Darkwood uses perspective, lighting, and brilliant sound design to create a tense, unnerving atmosphere that culminates into a truly harrowing to experience.

Played from a 2D, top-down camera angle, Darkwood challenges players to scavenge and survive a damp, bleak forested environment full of terrifying creatures. Beyond that, there are progression mechanics and a loose storyline to unfold as you speak with mysterious NPCs who lead you from one area to the next.

The best Alien game ever, pure and simple. Alien Isolation essentially takes the premise of the very first Alien film and turns it into a survival horror video game experience for the ages.

Taking control of Amanda Ripley, the daughter of Ellen Ripley, you board the deserted and eerie Servastapol Station on the hunt for clues on your mother’s whereabouts. You soon find yourself in a bitter fight to stay alive as thugs, androids, and of course a terrifying Alien hunt you down.

Isolation uses an innovative AI system to govern the behavior of the Alien itself so you never quite know where it’s going to pop out from and attack — save for the spooky pings of your movement tracker, a signature of the Alien films.

Isolation even includes a brilliant DLC called Crew Expendable which is set on the Nostromo space craft from the 1979 movie.

SOMA could be described as tense and haunting, rather than a pure horror game, but if you like exploring spooky locations and experiencing compelling stories then it’s well worth playing. Its unsettling narrative touches on themes such as identity, consciousness, and what it means to be human.

It’s set in an underwater facility called PATHOS-II where corrupted humans, twisted creatures, insane robots, and an inscrutable omnipresent A.I lurk. Gameplay in SOMA’s most tense moments revolves around evasion, but the truly most harrowing moments are having to decide whether you want to effectively “kill” sentient robots in order to harvest parts to progress your own character.

Five Nights at Freddy’s is more or less a horror experience for a younger audience, but it’s by no means a cakewalk for adults — animatronics are creepy no matter your age!

In terms of gameplay, you’re tasked with commanding a control room’s security cameras to figure out where a bunch of killer robots are, which requires you to develop a bit of a rhythm and figure out their patterns while also conserving power from the flashlight/doors.

Interestingly, the original designs of the puppets were originally intended for an educational kids’ game, but the feedback were mostly complaints that they were just too damn scary — and rightfully so! Fast-forward to today, and Scott Cawthorn has turned his family-friendly animatronic critters into a beloved horror franchise.

Be prepared for jump scares aplenty! FNAF is full of heart-stopping moments, and it’s a blast to play solo or with a group of people watching.

Developer Shinji Mikami’s spiritual successor to the original Resident Evil trilogy, The Evil Within 2 is a bigger and mostly better sequel to his original survival horror. The most notable change is its larger scale, challenging you to explore its terrifying semi-open-world environments fraught with danger at every turn.

The Evil Within’s thrills aren’t just the creatures who lurk in the shadows, though; through clever lighting and cinematography, The Evil Within 2 loves playing visual tricks on players with paintings that turn into hallways, hanging corpses that change positions when you’re not looking, and all manner of other unsettling deceptions.

Twinfinite’s 2017 review sums up The Evil Within 2 by highlighting that it’s a “thoughtfully constructed horror rollercoaster ride that strikes a delicate balance between giving the player the power to fight back, and also making them realize that sometimes, all those guns and gear won’t save you from the terrors you can’t understand.”

The OG ‘immersive sim,’ System Shock is the godfather of some of the games industry’s most acclaimed titles, including Thief, Deus Ex, and BioShock. You can absolutely see the lineage of System Shock in those games, except none of them were anywhere near as frightening. System Shock 2 is like BioShock meets Aliens, as a malevolent AI named SHODAN has taken control of a desolate space station whose inhabitants have been mutated into creatures who are collectively known as the Many.

System Shock 2 is an old-school gaming experience that will test your mettle with very little handholding, deep RPG mechanics, and survival horror elements that make every combat encounter tense.

Back in the 2010s, the horror genre was in desperate need of a developer to produce something innovative to push it forward, and that’s exactly what we got when Red Barrels launched Outlast in 2013. The first-person, stealth-heavy gameplay experience marked a big change from the third-person blueprint laid out by Resident Evil, and it fast became adopted by dozens of Outlast clones thereafter.

Why? Because even if Outlast wasn’t a masterclass in terms of a pure gameplay experience, it was absolutely a masterclass in terms of how its design created a uniquely terrifying atmosphere. If you want to be truly terrified, Outlast is for you; nearly 10 years on, it’s still one of the scariest horror games ever made, and it captures that feeling of helplessness and panic perfectly.

A survival horror classic, Silent Hill 2 is the best of the beloved series, and it’s definitely still worth playing in 2022 — especially if you’re interested in exploring the roots of the survival horror genre.

In many ways, Silent Hill 2 follows a similar design philosophy to the original Resident Evil trilogy, with its third-person perspective, puzzle-heavy gameplay, and use of lighting and SFX to create a tense ambiance. But here the psychological horror elements are at the forefront, rather than pure monster-slaying action.

At its blood-drenched core, though, are its incredibly relatable narrative themes such as grief, punishment, and guilt making for an intimate and disturbing story that’ll continue to haunt you long after the credits have rolled.

The first game from the same developer beyond Observer, Bloober Team’s Layers of Fear is a first-person psychological horror that plays on the classic haunted house premise. Players are tasked with exploring the inside of a spooky and mysterious Victorian-era mansion owned by a mad artist. The environment is the real ghoul of the game, shifting and changing in terrifying ways as you delve deeper into uncovering its disturbing secrets.

Twinfinite reviewed the game back in 2016 in which we remarked that Layers of Fear features “jump scares scattered throughout, but most of the game’s focus is on a subtler, more psychological kind of terror. Twisting hallways, tight corners, and unpredictable shifts to the house’s structure are everywhere. Players may find themselves in a hallway that seems to stretch on forever, only to turn back and find that the door they entered through is mere steps away.”

Layers of Fear received a sequel, which Twinfinite has also reviewed, but for us the original is still the best.

Surely one of the best multiplayer horror games ever made, Dead by Daylight is a 4v1 asymmetric horror experience in which players either take control of a fleeing victim or a killer out for blood. Dead by Daylight has collaborated with dozens of popular horror films to incorporate iconic villains, including the likes of Michael Myers (Halloween), Nemesis (Resident Evil), and Elliot Spencer (Hellraiser), as well as a bunch of its own spooky villains.

Developer Behavior Interactive has continued to support Dead by Daylight with all sorts of updates and crossover events since its 2016 release, and the game’s thriving community of players seems set to last long into the future.

The cooperative zombie shooter that started it all, Left 4 Dead may have been copied by a bunch of modern clones, but it’s still the quintessential multiplayer horror experience. Perhaps one could say it’s more action and less horror than most of the games on this list, but if you’re after an endlessly replayable spooky multiplayer game that’s incredibly fun with friends then Left 4 Dead 2 is well worth the purchase.

Set after a global pandemic that has turned the world into a post-apocalypse full of brain-devouring monsters, players embark on a quest to escape to safety. There’s a huge campaign that can be experienced solo or cooperatively; there are wave survival, scavenging, and realism modes, a versus experience, and even a Mutation option that allows you to mashup 30 variations of different modes. Put simply, there’s just an enormous of content to sink your teeth into, and that’s before you’ve even considered using mods to experience all sorts of fan-made options too!