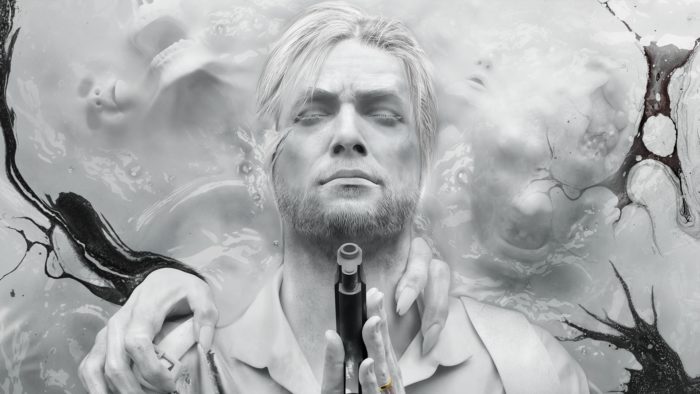 The Evil Within 2 on PS4

Stop me if you’ve heard this one before. A gruff and grizzled man spends the last few years of his life coming to terms with the death of his young daughter, only to one day find out that she was actually alive this whole time. He then goes to a quaint, but spooky, little town to find her. If you trim the fat away, the story of The Evil Within 2 is a mishmash of some of the best horror games we’ve ever played. It’s got a dash of the winning “father protects/saves daughter” formula from The Last of Us and The Walking Dead, and some good old-fashioned Silent Hill tossed in there for good measure. There’s also an evil organization called Mobius, led by a menacing suited figure who looks a lot like Half-Life’s G-Man, and a few somewhat surprising story twists that take place in what is essentially the Matrix. But spookier.

No, The Evil Within 2 isn’t exactly a narrative masterpiece in modern horror gaming. Thankfully, almost everything else about the game is superb.

So if you’ve played the first game, you won’t really need any introduction to Sebastian Castellanos or Kidman (not Nicole). After the events at Beacon Mental Hospital, Sebastian’s gone through some intense therapy sessions and ended up leaving the force. Meanwhile, Kidman, who was revealed to be a double agent for Mobius, disappeared. She shows up again in Sebastian’s life to tell him that his daughter, whom he thought had died in a fire, is still alive but she needs him to enter yet another terrifying STEM environment to rescue her. Because things went wrong. As they always do.

This time around, we’re sent into a nice American town named Union. It’s a made-up construct within the STEM system, which is basically a virtual environment where human minds can connect with each other. It’s also a very different atmosphere than what we saw at Beacon. Whereas the mental hospital trapped our heroes in a claustrophobic and confined environment, Union is much more open, and that shows in its gameplay as well.

One of the biggest primary changes made in The Evil Within 2 is the inclusion of semi-open world environments. Right after finishing the prologue chapters, you’re thrust into the residential area of Union, and you’re basically free to explore as you see fit. An NPC in the game’s first safe house gives you a brief rundown of what’s going on in STEM, marks a side mission on your map and other points of interest, and off you go. Putting open world environments into a horror game sounds like a recipe for disaster, but allow me to assuage your fears.

I, too, was initially put off by the freedom to explore Union. As I begrudgingly set a waypoint for the closest point of interest, I’d felt like The Evil Within 2 had already lost my attention. After all, this seemed like exactly the kind of thing that would break the pacing and completely kill any immersion or engagement you had in the game. But that’s not the case at all. While you do have the freedom to roam about these larger areas, the side objectives placed in the game are very deliberate. It’s not just a case of going to a specified location and picking up resources and collectibles. I mean, yes, that stuff is there, but it’s planned out in a purposeful manner that ensures the player is kept on the edge of their seat every step of the way.

A prime example of this occurs very early on in the game when I wandered aimlessly into a house to scavenge for materials. I picked up a journal on the table, read it, and suddenly the temperature dropped and the room was ice-cold. Trying to leave the house resulted in a terrifying encounter with a Sadako-inspired female wraith who transported Sebastian to another dimension where I had to find a way to escape. Later on, I learned that this encounter was entirely optional and unnecessary for story progression, though it does flesh out the lore quite a bit.

Everything in Union’s two major open environments was carefully constructed. Try to explore an abandoned train, and you might get ambushed by a trap laid out by one of the antagonists. Try to head underground to find a weapons cache, and you’ll get backstabbed by a Hysteric you didn’t know was lurking nearby all this while. The Evil Within 2 rewards exploration, though you won’t be heavily penalized for not wanting to do any of that stuff. So if you’re the kind of player who just wants the plot, you can skip all of that and go straight for the main mission marker.

During my time with the game, I only found three major side missions, and all of them added considerable depth to the STEM world and its inhabitants. I guess my point is this: developer Tango Gameworks didn’t just shoehorn the open world environments into the game. It’s there for a reason, and it holds nice, juicy rewards for the lore buffs. The Evil Within 2’s crafting and weapon upgrading systems have also gotten a lot deeper, so there’s always an incentive to scrounge up more materials in the world to give yourself an edge. Just like the character upgrade system from the first game (which makes a return here, too), weapon upgrades and crafting are all about managing your resources carefully and deciding which piece of gear you want to power up. 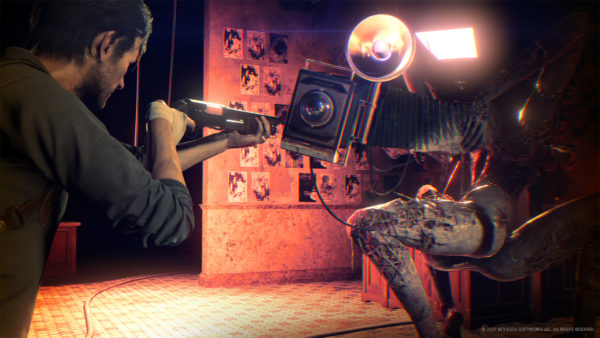 The coolest part about crafting is that you can use a workbench to make more ammo and healing items. But if you’re caught without a syringe in the middle of a fight, you could craft one on the spot as well. The catch is, because you’re out on the field and not at a workbench, crafting a syringe would take twice as many resources as it normally would. It’s a great give-and-take system that forces players to be really prepared before leaving a safe house.

That said, not everything about The Evil Within 2’s world is perfect. When the game funnels you through a well-designed horror movie hall-walking sequence, it works. But when you’re interacting with the AI – both enemies and allies – things get pretty comedic very quickly.

Where do I even begin with the AI in The Evil Within 2? Well, for starters, regular enemies are very silly. They can be a terror when they spot you and start chasing you down, but it’s extremely easy to break line of sight and leave them confused. For instance, I baited one of the zombies to follow me into an area with trees, and I was able to confuse it simply by circling around a tree before sneaking up for a backstab. Other times, enemies would just straight up forget where you were after you ducked behind some waist-high cover. There are also some hilarious AI pathing issues, where enemies would just get stuck on environmental objects while chasing you or attempting to get back to their original location after giving up.

Matters get a little more frustrating when you’re trying to sneak through a level, and AI behavior isn’t consistent with what you’ve come to expect from the game. Sometimes enemies would spot you in their peripheral vision when they didn’t before, or your sneak kills just wouldn’t trigger properly when you felt like they should.

The ally AI is less problematic, though it’s always funny to see a partner shoot in the opposite direction of where the enemies are coming from, or when their bodies start fusing with the zombies. In-game interactions with ally NPCs are painfully robotic, and their movements are so awkwardly stiff. The AI behavior and animations aren’t that big of a deal in terms of gameplay and progression, but it does give the impression that the game probably could’ve used a bit more development time to iron out those little kinks.

But when the game wants to scare you, it really puts in the work to do so. A big part of what made its predecessor so special was the brilliant use of lighting and cinematography. The Evil Within 2 loves to play visual tricks on players with paintings that turn into hallways, hanging corpses that change positions when you’re not looking, and the game successfully pulls off all these tricks by deliberately directing your attention to certain objects with light sources. You know you’ve got a good horror game when you’re too afraid to even turn around. The game’s best set pieces are the ones where you feel like you’ve been pulled into a creepy and bizarre alternate dimension where no amount of firepower will save you from the psychological terror that awaits. And the game doesn’t hold back on the gore either.

The Evil Within 2 goes all out with its gnarly imagery, but somehow you can’t help but be mesmerized by it. Many of the game’s early set pieces invoke Hannibal vibes where gore and violence are presented in a sick and twisted ‘artistic’ manner, illustrated by the contrast of flowing red and pure white. The new bosses are disgusting fleshy abominations that only the most imaginative minds could think up. It’s absolutely grotesque but morbidly fascinating at the same time.

Over the course of its 20-hour run time, I was pleasantly surprised (and also completely mortified) by how long the game was able to maintain a persistent sense of eeriness. Like every other horror title that gives you weapons and allows you to fight back against your foes, however, that terror starts to wane as you approach the game’s final act. But for the most part, The Evil Within 2 did a wonderful job of throwing in unexpected surprises, jump scares, and shocking visual presentations that kept me anxious for a very long time indeed.

As it stands, The Evil Within 2 is held back by a forgettable story and annoying AI issues that would probably put a serious damper on your gameplay experience if you were playing on Nightmare difficulty. And yet, it also does exactly what a horror game should do, and it does it well. Despite its flaws, The Evil Within 2 is a thoughtfully constructed horror rollercoaster ride that strikes a delicate balance between giving the player the power to fight back, and also making them realize that sometimes, all those guns and gear won’t save you from the terrors you can’t understand.