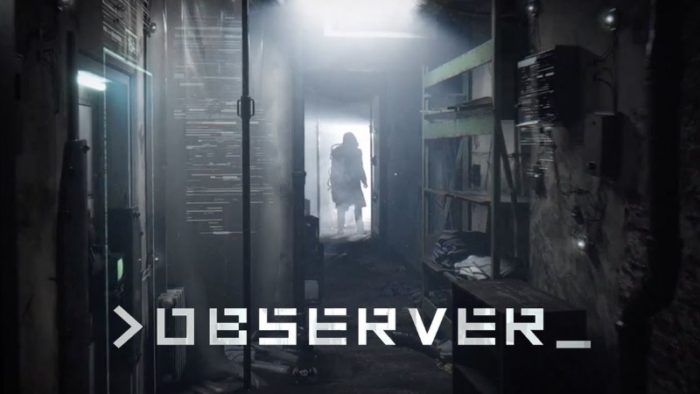 Right from the off, Observer is textbook cyberpunk. Grim and brooding with atmosphere, its world feels like a digital recreation of a William Gibson novel. Observer uses this unsettling ambiance to tee up a gripping horror narrative, but it also simultaneously weaves in themes of paranoia and espionage classic to the genre. It had me utterly captivated over the course of six hours, soaking up the tension of its eerie environment and locked into unraveling the mystery of its story. So captivated that even persistent technical issues such as frame rate drops and glitches almost weren’t enough to break my immersion. Unfortunately, though, slowly but surely the sum of these issues began to weigh heavy, culminating in a game-breaking glitch that stopped me dead in my tracks and disappointingly ruined the experience.

Observer is a first-person adventure game. I hesitate to use that popular and reductive term “walking sim,” but that is essentially what it is. As an Observer — an augmented KGB police detective — you’ll wander around a retro-cyberpunk vision of future Poland piecing together an ever thickening plot. Traversing a beaten up apartment complex, gameplay revolves around scanning crime scenes, interrogating residents, reading journals and emails, solving basic puzzles, and going inside the minds of victims to slowly reconstruct the order of events that lead to their death.

Observer is a story-heavy experience that relies on the curiosity of its world to compel players to explore, take their time, and absorb the macabre aura of its environment. It does this very well. You really can’t understate the attention to detail packed into the nuances of its aesthetic. Observer is clearly inspired by eighties science fiction, with flickering CRT monitors, analog computer controls, and film noir detective vibes. There are no clean lines and no bright colors in its palette; void of glamor, it’s dark and intimidating.

The plot is equally fascinating. Having received a somewhat cryptic phone call from his son, Adam, Daniel Lazarski is shocked to find a headless body in his son’s apartment. Is it him, and if not, where is he? The scale of this thriller quickly expands as more lifeless bodies appear in the confines of this crumbling building, and it becomes apparent that Adam is involved in something sinister. Placed on lockdown, residents are unable to leave their rooms, and communication with them is through intercom only. Voice acting is decent for the most part, and conversation not only provides a breadcrumb trail to follow but also fleshes out Observer’s lore. The everyday struggle is well conveyed by these working class personalities.

Augmentation of the human body is a central theme in the game, playing on the quintessential cyberpunk trope of high tech, low life. A conflict between those who approve of implants versus those who are vehemently opposed to them is alluded to throughout. At the center of this conflict is the “Necrophage” — a cyber plague that affects the augmented. The manufacturer of these robotic implants, Chiron, is the oppressive corporation responsible for blighting society with their “benefits”. As the story unravels, the Necrophage, Chiron, and Lazarski’s son become interwoven in a gripping tale that constantly kept me guessing.

For the most part, the gameplay that translates this story is engaging enough. Scanning crime scenes remind me of Telltale’s Batman series, linking evidence together using two different view modes — organic sensitive, and technology sensitive retinal displays. You’ll occasionally have to enter codes into keypads that require you to unearth information hidden in various rooms, but their location is never so obtuse as to frustrate with constant back tracking or head scratching. Overall, the game does a good job of shepherding you between objectives without ever feeling as though it’s holding your hand.

Developer Bloober Team’s previous work includes the psychological horror Layers of Fear, and its lineage is certainly evident in Observer. Jacking into the digital memories of victims via implant is what gives the observer his name, and it’s during these sequences that some clever but familiar cinematic techniques are implemented. The world becomes confused and surreal, with eerie voices and hallucinations combining for some mind-bending and frightening moments. Later in the game, the technique cleverly expands the scope of the story beyond the zoomed in locale of the apartment to wider themes of corporate surveillance.

Alas, it is during these sequences that Observer’s technical frailties are exposed. Throughout the game, frame rate dips and stuttering had been notable, though only causing minor irritation and never impacting the ebb and flow of proceedings too greatly. Towards the end of the game, however, Observer finally became well and truly unstuck. Trapped in a room with no way out, only after fifteen minutes did I realize that the this was a room I was never supposed to be flashed into for more than a few seconds. Attempting to reload, though, my progress was blocked. Each time that I spawned from save, I found myself helplessly falling through the map into a black abyss. With no ability to manually save and no chapter select, I had encountered a game-breaking bug that forced me to restart the game.

It was an immensely disappointing turn of events. Nothing spoils the immersion of a narrative-driven ambient adventure game quite like a glitch that completely halts progress. Moreover, up until that point, even frame rate stutters wouldn’t have convinced me to dock too many points from Observer’s final score, so compelling was its story and world building. These issues can and may be fixed via a patch, but at the time of this review’s publishing, it’s difficult for us to recommend a game with so many technical problems.

Despite the sour taste in the mouth left by upsetting technical shortcomings, Observer is a game that does deserve praise. Its grim, dystopian world is a truly brilliant imagination of cyberpunk, and it works superbly as a thematic setting for a horror game. The story itself invokes curiosity that tempts you to keep playing, compelling you to explore not just for clues about its immediate plot, but also the wider backstory and lore of its world. In that respect, Observer does everything that a good adventure game should do.

While gameplay might not break any new ground, puzzles and crime scenes provide enough interaction to keep you engaged beyond just watching the story unfold. The way in which the Observer uses implants as a means to explore memories is inventive, giving the narrative a grander sense of scale without technically leaving the building. The use of cinematic effects, too, cleverly shifts the game’s genre between thriller and psychological horror. In its best moments, these sequences play out like a blend of the Matrix and P.T. Yet in its worst instances, the game crashes and breaks, which is something that should never happen in any video game.