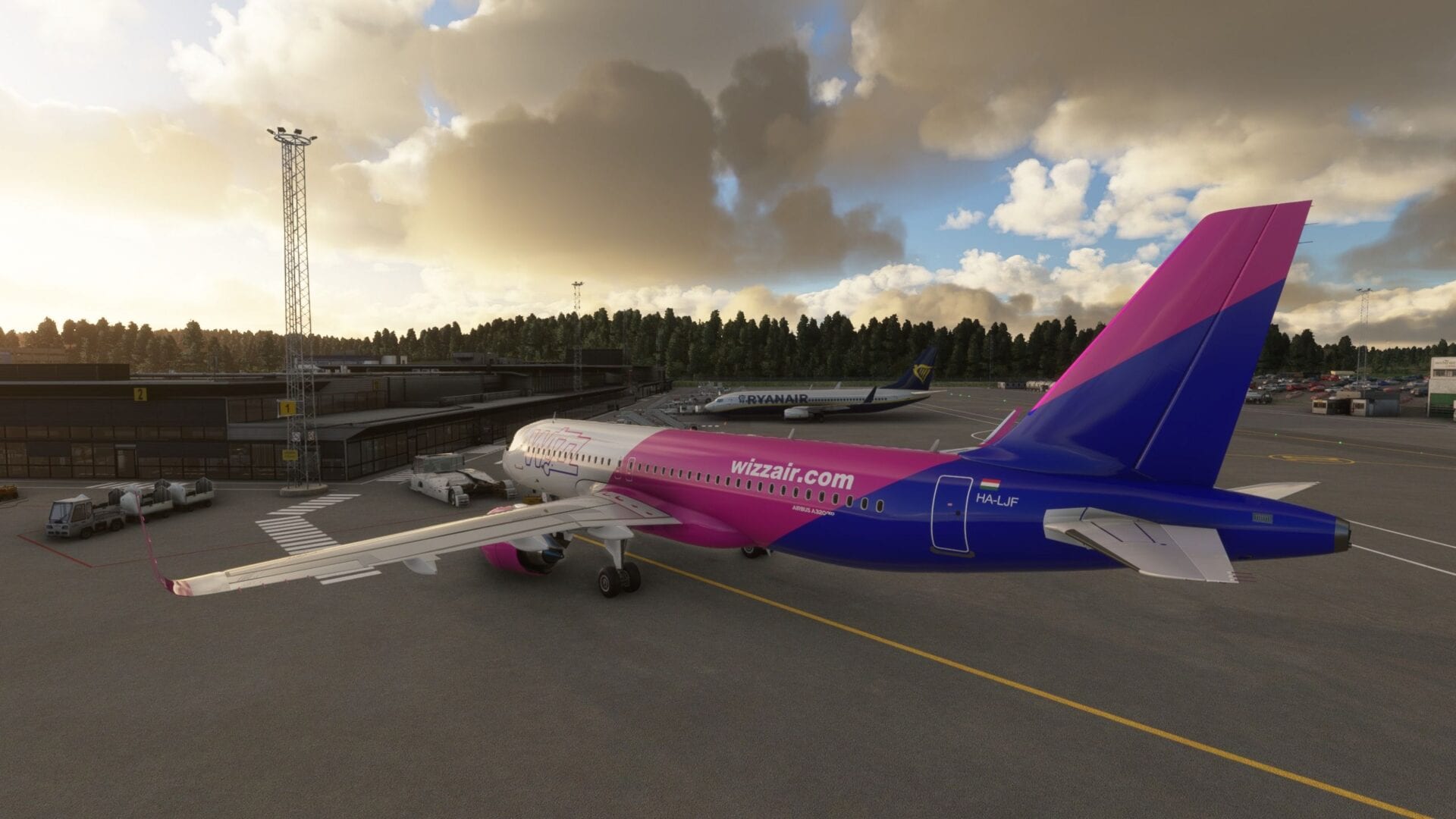 As you may have noticed from our coverage, the release of Microsoft Flight Simulator kicked the third-party add-on industry into overdrive.

It has always been lively during the past few years, but a new simulator with mass-market potential certainly caused an acceleration.

Among the third-party developers and publishers on the market, Orbx Simulation Systems is certainly prominent. Not only the company produces many add-ons on its own, but it also distributes more by partner studios from all over the world via its handy Orbx Central client.

Twinfinite talked with CEO Dr. Anna Cicognani In order to learn more about Orbx’s plans and get more insight on Microsoft Flight Simulator’s impact on the industry from an insider’s perspective.

Giuseppe: First of all, what’s your general opinion of Microsoft Flight Simulator now that it has been on the market for about five months?

Anna Cicognani: There are some incredible features in Microsoft Flight Simulator (MSFS) – lighting, weather, rendering, area coverage. The sim creates amazing visuals. For us in scenery development, this is quintessential, and a very big attraction for new and old simmers.

I think that MSFS can very well become “the” simulator, where a lot of other items can be added to the “digital twin” in the coming years.

The great advantage of MSFS is the in-sim marketplace, which allows a community of creators to push the boundaries of what is possible. Microsoft got that model right.

It would be great to see other sim developers following this example and opening up their platforms to the community to create content. I think everyone wins that way – the sim developer, the creators of add-ons, and ultimately the users.

Giuseppe: Could you talk about how the release of Microsoft Flight Simulator impacted Orbx’s work and business?

Anna Cicognani: We established a partnership with Microsoft and the Asobo Flight Sim team back in November 2019, and we are still working with them on the base sim.

As an add-on developer, at the beginning, we did not know what to expect exactly. Were all customers going to “switch” across to MSFS? Was there going to be still an audience in Prepar3D and X-Plane? How much scenery were customers going to want in the new sim?

We do not want to develop products nobody uses. Our motto is to “Expand your horizons” and create amazing visual experiences. The feedback from simmers is super important, and we want our work to reach out to as many people as possible – like all artists do!

Giuseppe: Some argue that the larger customer pool provided by Microsoft Flight Simulator is going to cause third-party developers to lower prices across the board, at least to some extent. What are your thoughts on this?

Anna Cicognani: Some of our products are already cheaper for MSFS. This is partially because we are trying to see if there is some elasticity around the prices.

We also want to make them as affordable as possible, while we still make sure our artists and indies are paid for their efforts.

When I read comments like “Oh, this should cost two bobs to make, everyone can do that. Why is it so expensive!?” I go: “Sure – give it a shot and see if you can feed your family.” We have full-time staff who love what they do, and we want them to make a real living out of this. There is no free lunch.

Giuseppe: Could you provide some insight about how Asobo and Microsoft work with and support third-party developers like Orbx?

Anna Cicognani: I must say our experience has been excellent.

Asobo is very talented and fantastic to work with, and Jorg, Head of Microsoft Flight Simulator at Microsoft, has been really great at establishing a trusting relationship with us. I think we all want the same thing, and that creates great alignment between us.

Microsoft has been a great support to us in providing access to their Software Development Kit (SDK), taking on our developers’ feedback for SDK features and functions that could be improved, and providing the ability to publish our products on the in-sim marketplace.

We are still working with them to make sure the airport data in the base sim is accurate. It’s been great to have our expertise recognised, and work closely with Microsoft and Asobo on this.

As a third-party creator, knowing that Microsoft supports the community, now and long term, is absolutely essential.

Giuseppe: The COVID-19 pandemic has affected game development on multiple levels. While I’m sure most Orbx developers can easily work from home, has gathering sources for the precise reproduction of airports and locations become more challenging?

Anna Cicognani: We have staff and indies all over the world, so there is always someone friendly who can take some local shots for us. There is so much imagery also from various sources, free or paid, so we really have not had any issues at all – so far!

Giuseppe: Orbx’s add-ons mostly focus on Europe and North America, with some significant parts of the world that tend to be a bit underserved by third-party developers in general. For instance, Japan has many great airports and very few developers working on it despite the world update. Is there any part of the world you’d like to expand your add-ons too?

Anna Cicognani: We are currently working on our newest installment of the Global openLC series, Asia. We are doing that in phases.

It’s perhaps a crazy thing to do given MSFS has the whole world pretty much under control, but we like to think our scenery can beat any mapping product (that is our secret sauce!). We are doing this for Prepar3D and FSX because we think that it is important for us to cover the globe.

Once openLC Asia is done, it will tick a big box for us, and I am very excited to be doing this, even if we will probably invest quite a bit of money and time over it (yikes!), but it’s one of those that we really have to do.

In terms of other parts of the world, obviously, Australia and New Zealand are quite local for us, and we really want to look at pushing the boundaries of what we can do with the new sim. We also love those General Aviation gems and are always searching for the next charming spot to render up.

Giuseppe: You have expanded partnerships on Orbx Central considerably over the past few months. What are the reasons behind this drive, and is the dream of a possible Steam-like platform for flight simulator add-ons any closer?

Anna Cicognani: We started off slowly to see if we could offer Orbx Central (OC) to partners, as it is such a great piece of kit to hold and manage all of your add-ons, and it makes it so simple to install them.

I think customer feedback has inspired a lot of partners to publish via OC, and of course, if their quality and product offerings align with ours, we say yes!

There wasn’t any grand design to grow this area of the business, but Orbx Central is so good that it kind of happened organically, and the good thing is that we keep making it better and better.

We have recognized it is becoming a go-to destination for simmers and publishers, and full credit goes to our Technology team for putting so much of their passion for flight sim into making such a great app.

Personally, if I find something that makes my life easier like this, I give thanks to the gods!

Not sure if we will ever get to a Steam model. For the moment we are happy we can make the publishing and install process a breeze.

Giuseppe: While I’m sure you can’t provide details, do you plan to grow your partners pool further, and are there more partnerships in the pipeline that haven’t been announced yet?

Anna Cicognani: Eventually, we would like to extend Orbx Central to as many talented developers as possible, including smaller houses that may find it challenging to get their amazing products to the wider audience. It’s a bit of a question of resources for us at the moment. Also, we want to continue to curate the content, so when someone sees a product on Orbx Central, they already know it’s of a certain quality.

There is actually a lot of really good freeware out there that we would like to publish too, if it meets the mark.

Giuseppe: A major flight simulator on consoles is going to be something new for everyone in this business. Have you already given some thought about Xbox support, and do you have any plans that you can share?

Anna Cicognani: We of course would love to reach into the Xbox audience – we think it will be very different from the PC user base.

It is difficult to know what kind of products those users will like – we think it will be a younger audience, with a shorter attention span, more entertainment options at hand that interest them, and probably less money they are willing to invest on add-ons.

I think the main challenge will be to “educate” those users on the value of add-ons. Even so, we expect a much, much smaller percentage of users to purchase flight sim DLC on Xbox.

Giuseppe: Is there anything else you’d like to share with Microsoft Flight Simulator users about what they can look forward to from Orbx going forward?

Anna Cicognani: We have some amazing landmark packs coming up, and some serious Australian content, including our “very own” Essendon Fields Airport (YMEN), which is where our Australian HQ is located. YMEN is celebrating 100 years in 2021- how good is that!

Our partnership video will be published by Microsoft on Jan. 28; there will be some insider sneak peeks at the team and the work we do. Don’t miss it!

Overall, we have decided not to publish a long term roadmap, as sometimes we get together and there is a particular airport or region that pops up that we madly want to do, so we go ahead and do that. I don’t want a rigid roadmap, which could potentially create disappointment with our loyal customers if we change our minds. We have a “Coming soon” page now, so that’s where the previews can be seen.

I am going to really push this concept attached to our tagline “Expand your horizons” – I love this idea, practically and metaphorically, so keep looking out for some groundbreaking stuff from us!