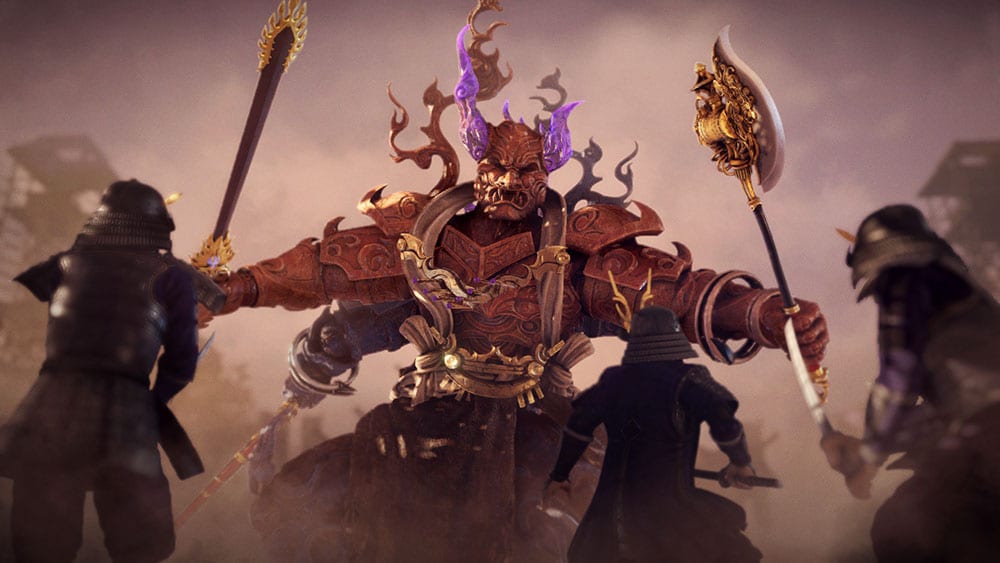 To be more precise, the assets focus on the content coming in the “Last Chance Trial” demo releasing today and lasting until March 1.

First of all, we see the Ryomen Sukuna, which has pretty much been the “poster boy” of the demo. It’s a Youkai that looks like a blue and red demons attacked together back to back. It was said to have appeared in the region of Hida (currently Gifu prefecture) during the time of Emperor Nintoku, wielding multiple weapons with its four arms, engaging in brutal attacks toward the people.

Sen no Rikyu is a tea master who was in service if Hideyoshi. He used to be a merchant in Sakai. He studied the tea ceremony under the tutelage of Takeno Joo, and he was later called “Tea Saint.”

At first, he served Oda Nobunaga, but after his death, he moved on to serve Hideyoshi Toyotomi as his confidant. He has influenced many warlords being the focus of both Nobunaga and Hideyoshi’s use of tea ceremony in politics.

Saito Yoshitatsu was the daimyo of the Mino region, son of Saito Dosan. Following the retirement of his father, he inherited the position of head of the family and took over Inabayama Castle. He was actually hostile to his father, who forged an alliance with Nobunaga by having him marry his daughter Nohime. Yet, Mino and Owari would once more go to war due to the actions of Yoshitatsu.

Kashin Koji is a youkai who took the shape of a monk wielding a Khakkhara staff and recognizable for its blazing red eyes. It attacked the protagonist in the past causing serious injuries and it was involved from the shadows in various incidents. Its identity is shrouded in mystery.

We then move on to stages, starting with Mount Tennozan, located in southern Yamashiro. It extends over flat terrain forming a valley in which the Katsura River and the Uji River flow.

After the Honnoji incident, Akechi Mitsuhide took advantage of this area’s strategic value after failing to obtain reinforcements, luring Hideyoshi’s army to the swamps along the rivers. Yet, Tokichiro occupied the area ahead of time aiming to break through to the enemy encampment. The battle that would later be defined “Decisive” was about to begin.

Nanbanji Temple was a church who was built by western mercenaries who traveled to Japan by renovating an old local temple. It is said that the design inspired the seminary that Oda Nobunaga built within Azuchi Castle. Hidden among believers and western mercenaries coming and going every day, some seem to have delivered shiny stones.

Inabayama Castle was the ancestral residence of the Saito Clan, and it used to be a strong fortress overlooking the plains of Mino, towering over a steep hill. When Saito Yoshitatsu inherited the castle from his father Dosan and made it into his base, its appearance started to become similar to that of a demonic castle. It’s rumored that this bizarre appearance reflected Yoshitatsu’s desire for power.

We then get the introduction of a new gameplay element, Teaware.

You can find teaware during your appearance, but upon discovery, it will require an appraisal, that can be done by Matsunaga Hisahide in the tea house. If it’s not suitable to his taste, he’ll mercilessly break it. He has a strict aesthetic eye.

The teaware that passes his appraisal is returned to the player and displayed in their home. There is a cabinet with four slots that can display four teaware cups.

A variety of advantages can be unlocked depending on the teaware you display. Different materials can affect luck, earned gold, and teaware drop rate.

Another element is the return of Clan Battles that appeared in the original NiOh as part of the online features. Players can join a clan and participate in power struggles.

Some of the clans have been changed, like the Imagawa Clan. Also, a new element called “heirlooms” has been added, being a tea ceremony set for each clan. During a power struggle, all players belonging to clans assigned to the red army and compete against those belonging to the white army for the total amount of glory earned over a certain period of time. Players who achieve the best results in a clan can borrow its heirloom for a while.

On top of that, you can exchange your earnings at Matsunaga Hisahide’s tea house with specialized equipment of a category you choose. While the type can be selected, the specific item is random.

We also get to see more battle techniques in action, and a few Youkai skills.

Last, but not least, we get to see the guardian spirit Isanagami, belonging to Sen no Rikyu. Its form is that of a whale and it manifests as if rising from the ground in front of the player, then suddenly falling back causing giant splashes. It causes powerful abnormal statuses associated with the water element.