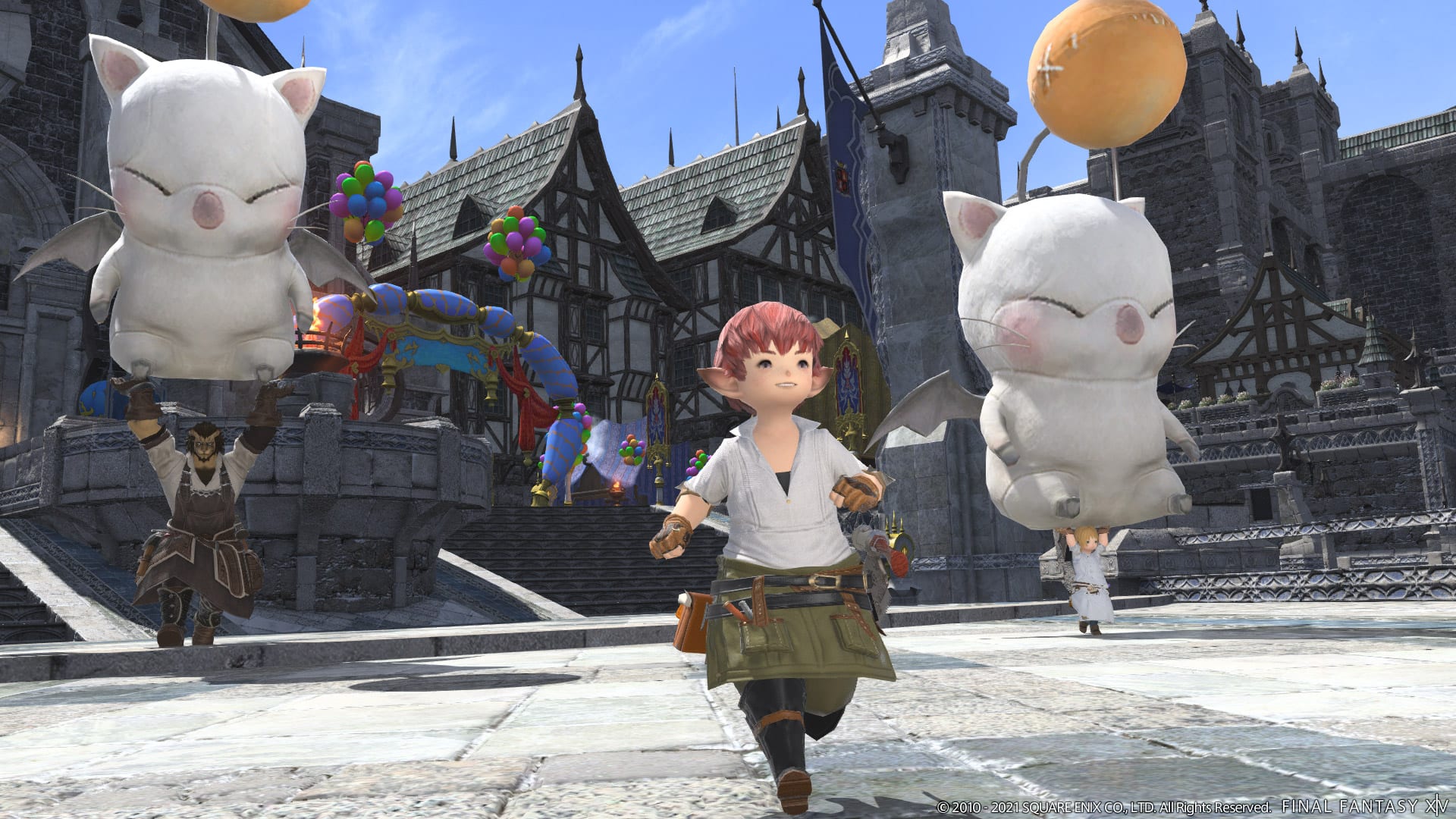 First of all, we learn that following part 1 of the patch on April 13 (of which you can watch a really epic trailer), part 2 will come at the end of May.

Below you can read an overview of the two parts of the update. The story quest will be split between the two parts.

We learn that Part 3 of the YoRHa: Dark Apocalypse alliance raid will be titled The Tower at Paradigm’s Breach.

The new content for the Save the Queen questline will come in the second part of the update.

Interestingly, an item that the team wanted to originally sell on the Mog Station will instead be available for MGP in the Gold Saucer. Yoshida-san teased the Regalia from Final Fantasy XV, which was included in a collaboration event a while ago.

A new quality of life update will let players receive achievement rewards directly from the achievement menu instead of having to run to the NPC in Gridania.

The update to collision detection is going to affect the communication between server and client in order to prepare the game for the future so that it can be kept running for a long time.

We then get to see the first look at the opening cutscene and gameplay of The Cloud Deck Trial, with the return of a certain Gund… ahem… mecha.

You’ll notice that the target circle has been changed in order to clearly show where the enemy boss is facing.

Next, we hear about the update to the Ishgardian Restoration. The Firmament will periodically old a “Skyrise Celebration” to honor the effort of the players. During these celebrations, which will happen every two days, the local will host events named “fêtes” every two hours.

These are competitive events similar to FATEs for crafters and gatherers, granting rewards (Present Box) depending on your contribution.

Next, we get more information about the PS5 version. It’ll feature fast loading times, up to 4K resolution (you can choose between 4K, 1440p, and 1080p), high-resolution UI Assets, DualSense haptic feedback, additional Trophies, and 3D audio support.

You can hear the direction of attacks or footsteps in the dark thanks to 3D audio. Yoshida-san was impressed by the work done by the sound team.

Next, we got to see the first gameplay of the PS5 version filmed off a monitor rendered at 4K resolution.

Yoshida-san showcased the resolution of the UI elements and a new static fireplace minion which roleplayers are going to love. You can summon it anywhere you can summon minions.

We also take another look at the new target circles showing where enemies are facing.

Another interesting element showcased is how quick the loading times are. Teleports are nearly instant.

More new minions (the usual kind that follows you) were also showcased, alongside new mounts.

More info on the open beta of the PS5 version can be found here.

Speaking of more miscellaneous updates, we learn that loading times will be improved on all platforms and PC players will get the option to use the new high-resolution UI.

A “pricey” new mount will be available for purchase in game with gil.

Next, we take a look at a rather awesome boss in The Tower at Paradigm’s Breach YoRHa Dark Apocalypse alliance raid.

Then, we get to take a look at the gear and glamors offered by the raid.

Next in line is a look at Leviathan Unreal.

We then get to see the update to Save the Queen including the massive field it’ll include. The new battlefield is named Zadnor on the border with Dalmasca.

This will be the final chapter of the questline with the Resistance Rank getting an increase to 25 from 15. Progression will continue after that.

New Skirmishes and Critical Engagements will also be added on top of the Dalriada, a new assault for up to 48 players.

Patch 5.5 will also add means to increase mount speed, while skirmishes and critical engagement will be adjusted to require fewer players. You can read more tweaks in the slides below.

The final upgrade step to Resistance weapons will also be offered. Incidentally, once you fully upgrade a weapon, the process for further weapons will be different. You’ll need only the final step.

Two new screenshots provide a look at the Ultimate coming in 6.1 (after the release of the Endwalker expansion). It’ll likely prove familiar.

We then get to see new housing items. There’s even a “TV screen” projecting a moving image that can be used for windows as well

We also take a look at the frames and stickers that will be offered for a limited time during the Digital Fan Festival.

Square Enix also shared plenty more details about the 5.5 update a little while ago and recently published a gallery of screenshots and a second batch.

If you’re unfamiliar with Final Fantasy XIV, it’s currently available for PlayStation 4 and PC, while the open beta for the brand new PS5 version will open on April 13 alongside update 5.5. The upgrade will be offered free of charge to those who own the PS4 version.