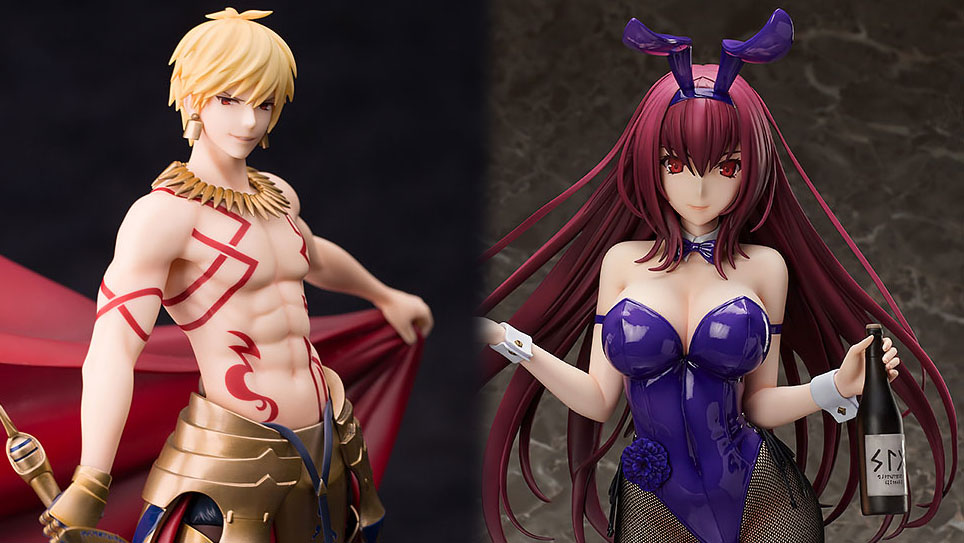 You can say that a game is really, really popular when different manufacturers create figures not only of the same character but with exactly the same outfit and pose. This is the case with Fate/Grand Order.

A few months ago, we reported about the bunny version of Scathach being released by Alter. Apparently, the bunny costume masters at FREEing did not want to be undone, so they’re releasing their own. It is now available for pre-order at select Japanese retailers including Ami Ami for 22,800 yen. That translates to $210.

You could say that’s not bad for something born of an April Fool’s prank.

Of course, this figure has plenty of elements to differentiate itself from its considerably cheaper counterpart, including the massive 1/4 scale and the stockings made with real net, which are pretty much FREEing’s trademark.

The impressively detailed sculpt made possible by the large scale, real net tights and fluffy bunny tail make for an extraordinary figure not only fun to look at, but also to touch. Be sure to add this bunny style version of Scathach overflowing with mature charm to your collection!”

For those who prefer figures of handsome bad boys, enter Gilgamesh by Hong Kong-based manufacturer Myethos.

“For a Mongrel, you sure know how to bark.”
“From the popular smartphone game “Fate/Grand Order” comes a scale figure of Archer/Gilgamesh! The King of Heroes has been recreated based on his Third Ascension appearance in an original pose. His muscular physique, summoning circle and Noble Phantasm Ea have been recreated in outstanding detail. Be sure to add him to your collection!”

We’re not done. Good Smile Company is releasing two Nendoroids of Altria Pendragon Alter from the Shinjuku chapter, or better, two versions of the same Nendoroid.

The first includes her signature Cuirassier Noir motorbike and dog Cavall the 2nd, while the second comes by herself, without frills. They’re priced respectively at 4,860 yen ($45) and 3,850 yen ($36).

“You’re my Master?”
From the popular smartphone game “Fate/Grand Order” comes a Nendoroid of the Saber-class servant Altria Pendragon (Alter) from “Singularity Subspecies I: Malignant Quarantined Demonic Realm: Shinjuku Phantom Incident” in her casual outfit! This version is a set of Nendoroid Saber/Altria Pendragon (Alter) Shinjuku Ver. and additional optional parts including her Cuirassier Noir motorbike.

She comes with a standard expression, a shouting expression and a blushing expression as though saying her “H-How long have you been standing there?” line. Her Noble Phantasm Excalibur Morgan is included as an optional part. Additional optional parts include a hamburger, her dog Cavall the 2nd, her motorbike Cuirassier Noir and debris parts. Be sure to add this slightly different version of the blackened King of Knights to your collection!”

The game has recently passed six million downloads for its western release in English, which is a testament of its popularity even outside of Japan (maybe even more than getting the same figure from two different manufacturers).