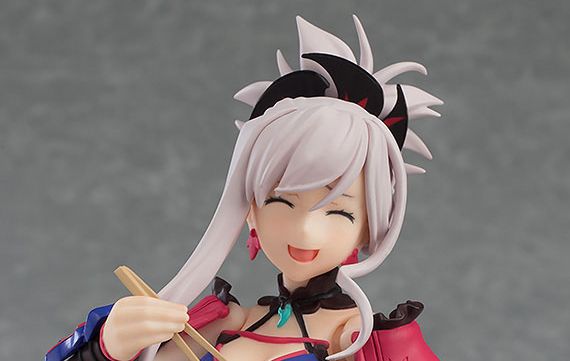 Considering just how massively popular Fate/Grand Order is, it’s not surprising to see how much attention it gets from figure manufacturer. A new figma is coming.

This time around it’s time for Miyamoto Musashi to stand under the spotlight with this posable figure by Max Factory.

If you’re wondering what a figma is, it’s a series of posable figures by the Tokyo-based manufacturer. They have become so popular that many use the term as a catch-all for Japanese action figures.

Miyamoto Musashi is already available for pre-order at several local retailers including AmiAmi for 7,300 yen, which roughly translates into $66.

She is sculpted by Shinji Koshinuma in cooperation with Masaki Apsy and she comes in the usual figma size, standing 140 mm tall.

As usual, she comes with interchangeable faces with different expressions, hands in different poses, weapons, accessories, and a base to help her stand.

If you’re interested in more Fate/Grand Order figures, you can check out the upcoming Mysterious Heroine X Figure by Kotobukiya, the Scathach bunny figure by Alter, tne Artoria Pendragon figure in her Heroic Spirit formal dress, the Elizabeth Bathory Brave Version Figure by quesQ, and the Ozymandias figure from MegaHouse.

The game is currently available for iOS and Android