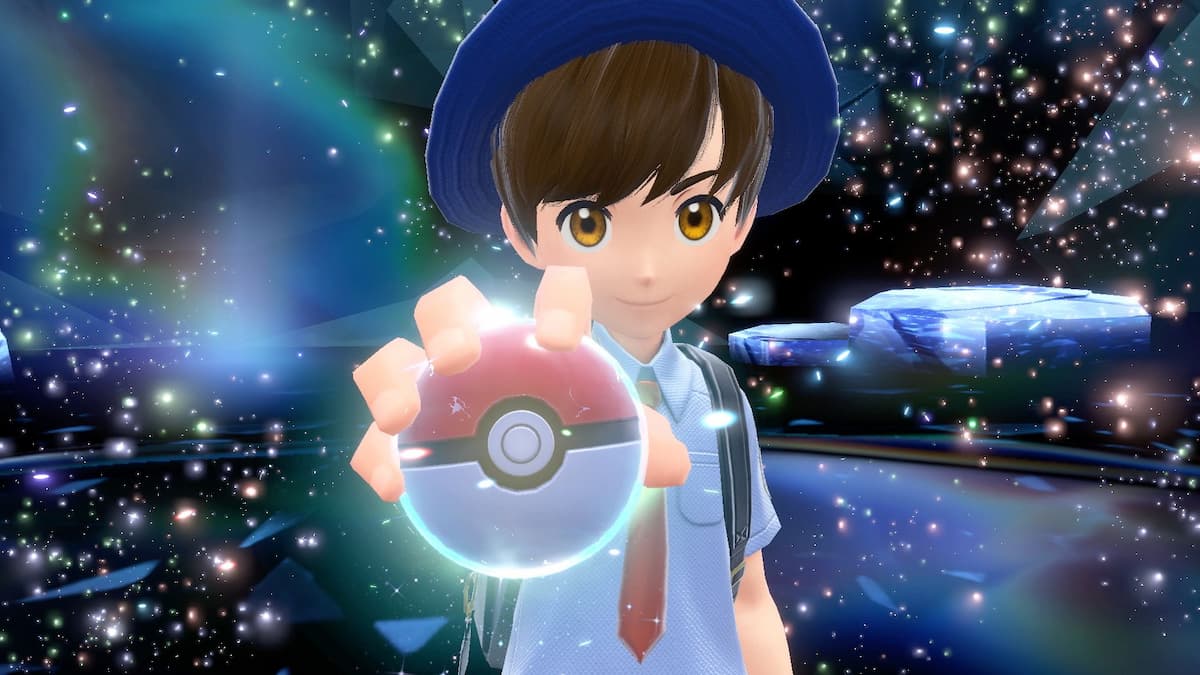 Pokemon Scarlet and Violet bring 400 Pokemon to the land of the Paldea Region, with 104 of these specimens being new creatures of Generation 9. While you can obtain each of these 400 Pokemon in-game, some are much harder to find than others for various reasons, including needing to meet special circumstances, tricky disguises, high rarity, and low spawn rates. But don’t worry; we’ve compiled everything you need to know before you begin your hunt for these creatures. Here are 10 rare Pokemon and where to find them in Scarlet & Violet.

Ralts has been a fan-favorite in the Pokemon franchise since its Generation 3 debut. It is one of the most popular Psychic-Type evolution lines in the games due to both Gallade and Gardevoir having good potential as powerful, core members of your team. However, Ralts is an extremely rare Pokemon in the game with a very low spawn rate, as noted in its Pokedex entry.

On top of this, Ralts’ in-game habitat is one of the smallest in the game, with its entire home covering only a tiny square on the Paldea Region Map. While Ralts is said to live near towns, it seems catchable only outside of Los Platos, or in Terra Raids. For more details on the location Ralts can be found, check out our complete guide for where to find and catch Ralts in Pokemon Scarlet and Violet.

Riolu is another popular Pokemon and is a worthy addition to any trainer’s team. This is because Riolu evolves into the powerful Fighting-Type Lucario, a powerful attacker with admirable success in Competitive Pokemon Battling. Keeping this information in mind, Riolu is an excellent choice for your team in Paldea but a nuisance to obtain due to its rarity.

Riolu is described in its Pokedex entry to be rarely seen, meaning it has a low spawn rate and will be more time-consuming to seek out than other Pokemon. While its rarity is an obstacle to overcome in your Riolu hunt, it’s also a Pokemon that is only available in one area in the game, meaning you can at least narrow your search to this location. When looking for Riolu, you will want to hunt in South Province (Area Four). For more in-depth instructions on hunting down Riolu, consider following our guide for where to find and catch Riolu in Pokemon Scarlet & Violet.

Zorua is well-known as a trickster in the Pokemon franchise, which plays out no differently in Scarlet & Violet. Zorua is a rare Pokemon with a low spawn rate, and hunting for one is also a little more complex than simply roaming the overworld and waiting for one to appear. This is due to the ability Illusion, which is the signature ability of Zorua and its evolution, Zoroark.

In Pokemon Scarlet & Violet, the Illusion ability allows Zorua to disguise itself as other Pokemon in the overworld, much like Ditto’s transform ability. This means that any Pokemon you stumble across in the specific habitats they are known to live in may be a Zorua in hiding. For more detailed information on identifying Zoruas in disguise and where to search for them, check out our complete guide on where to find and catch Zorua in Pokemon Scarlet & Violet.

Charcadet is among the new Generation 9 additions to Pokemon Scarlet & Violet. Charcadet is a Fire-Type Pokemon that evolves into Fire/Psychic-Type Aramrouge, or Fire/Ghost-Type Ceruledge, depending on which version of the game you have. As one of the newbie Pokemon available for the first time in Paldea, many people are looking to catch their own Charcadet. However, as a rare Pokemon, finding one can be a struggle.

Though Charcadet’s Pokedex entry details that it lives throughout a large portion of the Paldea Region, it is also known to be rarely seen and has a very low spawn rate. This can make finding one difficult, but if you need extra help in your search, don’t worry. You can check out our guide for where to find and catch Charcadet in Pokemon Scarlet & Violet for all the information you’ll need on the specific areas to search and more in-depth details about the fiery little guy.

Tandemaus is a new Normal-Type Pokemon that has made its debut in Pokemon Scarlet & Violet’s Paldea Region. With Tandemaus being a Generation 9 newcomer, many are looking to catch one of the adorable little critters to add to their teams or Pokedex, but this can be a little more difficult than anticipated due to its rarity.

Not only is it a rare specimen within the Paldea Region, but Tandemaus is also a physically small Pokemon, meaning you can easily miss it in the long grass. Because of this, searching for Tandemaus on foot is recommended rather than trying to find them while riding Koraidon/Miraidon. For more information on Tandemaus and the exact locations to search for, feel free to follow our complete guide for where to find and catch Tandemaus in Pokemon Scarlet & Violet.

Happiny is a Normal-Type Pokemon and the first of its evolution line, evolving into Chansey and then Blissey. There’s plenty of reason to want one of these Pokemon in your collection, from Blissey’s defensive power to Happiny being a lovely little specimen to have at your side during adventures and picnics. However, Happiny is relatively uncommon to encounter in Pokemon Scarlet & Violet, with one of the lowest spawn rates in the entire game.

Though it’s found in many areas in the Paldea Region, Happiny’s Pokedex entry notes it as rarely seen. This means searching for one might take a little longer than usual, but we have everything you need to know to catch one and have the baby Pokemon by your side before you know it. For more detailed information about hunting and locating the adorable Playhouse Pokemon, check out our guide for where to find and catch Happiny in Pokemon Scarlet.

Frigibax is a Dragon/Ice Dual-Type addition to the franchise as part of the Paldea Region’s Generation 9 newbies. Many players have been hunting for a Frigibax as it evolves into the undeniably awesome Baxcalibur. After all, with Baxcalibur’s unique Ice/Dragon typing and its powerful-looking design, who wouldn’t want one of those creatures on their team?

Unfortunately, Frigibax is one of the rarest Pokemon to encounter in the game. It can be found on Glaseado Mountain, but has an extremely low spawn rate, meaning you have a low chance of coming across one of these specimens even in its preferred habitat. Fortunately, we have all the tips, tricks, and information you’ll need to help make your search for Frigibax a success, so feel free to follow our guide on where to find and catch Frigibax in Pokemon Scarlet & Violet.

Glimmet is among the new Generation 9 additions to the Pokemon franchise, having made its debut in Pokemon Scarlet & Violet’s Paldea Region. Glimmet is a Rock/Poison Dual-Type Pokemon that evolves into Glimmora, with both of these Pokemon being necessary to catch to complete the Paldea Region Pokedex. However, Glimmet is one of the rarer Pokemon in the game, so you’ll have to keep your eyes peeled on your search.

Glimmet can be found in multiple locations scattered throughout the Paldea Region, but it has a very low spawn rate, making it difficult to find. Glimmet is most commonly found clinging to walls in underground areas and caves, so keep this in mind for your search. Alternatively, if you’d rather skip catching Glimmet and search for its evolved form, you may want to check out our in-depth guide for where to find and catch Glimmora in Pokemon Scarlet & Violet.

Applin is a Grass-Dragon Dual-Type Pokemon that gained popularity during its debut in Generation 8’s Galar Region. Applin evolves into either Flapple or Appletun, depending on if you evolve it with a Sweet Apple or Tart Apple. With both of these Pokemon being viable options as core members of your team, many are hunting for Applin so they can evolve it into their apple-themed dragon of choice.

Applin is a sneaky Pokemon to encounter, as it’s not found roaming the ground or swimming in water like most other creatures. Instead, Applin can be found hidden in trees and hanging from the branches. To catch one, you’ll need to start searching the trees in Applin’s known habitats, then knock it down to the ground by charging into the tree with Koraidon/Miraidon’s dash.

Cyclizar is a new Generation 9 Dragon/Normal Dual-Type Pokemon introduced in the Paldea Region of Pokemon Scarlet and Violet. Cyclizar resembles the Ride Pokemon of the game, Kiraidon, and Miraidon, and even operates as a Ride Pokemon for other trainers and NPCs. Despite this, it does not evolve into either of these creatures and instead is its own separate species needed to complete the Paldea Pokedex.

Cyclizar is a rare Pokemon with a low chance of appearing in its known habitats. Not only this, but Cyclizer is also extremely speedy and can be hard to spot among the long grass when it moves around so much. To help with your search, you should search for Cyclizar while riding Kiraidon/Miraidon, as this point of view makes it easier to spot them. For more details on Cyclizar’s habitat and tips for your best chance at catching one, check out our complete guide for where to find and catch Cyclizar in Pokemon Scarlet & Violet.

That’s it for 10 rare Pokemon and where to find them in Scarlet & Violet. Which ones have you managed to hunt down and capture? Feel free to let us know in the comments below. Finally, do check out the rest of our Pokemon Scarlet & Violet content here at Twinfinite. We have a wide range of lists, gameplay guides, and information that you can use to assist you on your journey through the Paldea Region, such as 10 best Pokemon to catch at the start of your journey, how to increase shiny odds, and where to find all Evolution Stones.